Accessibility links
House Votes To Push Deadline On Equal Rights Amendment Changing the deadline is one way ERA proponents are trying to make the amendment part of the Constitution, but there isn't legal consensus on the tactic, and the Senate is expected to kill the bill. 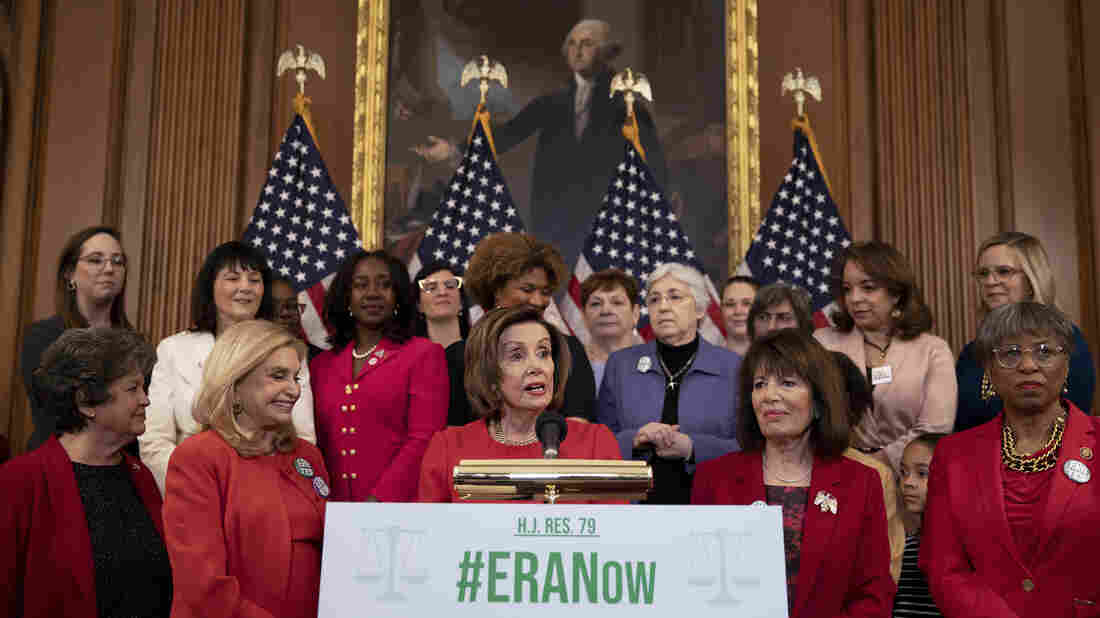 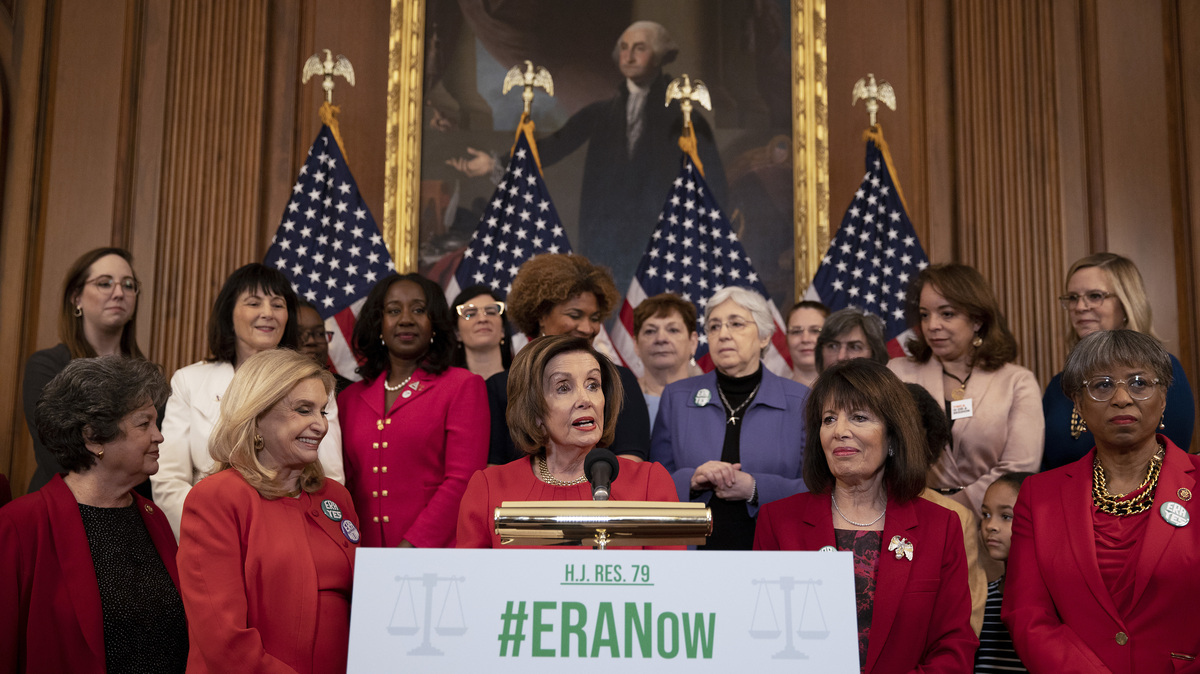 House Speaker Nancy Pelosi, D-Calif., speaks Wednesday at a press conference ahead of the House's vote to remove the ratification deadline for the Equal Rights Amendment.

The U.S. House has voted to remove the deadline on ratifying the Equal Rights Amendment in an attempt to revive the amendment. The 232-183 vote fell largely along party lines with five Republicans supporting the measure and zero Democrats opposing it.

Changing the deadline is a key part of one route that some ERA proponents believe would lead to the amendment becoming a part of the Constitution, but the path forward is uncertain.

The proposed amendment says simply, "Equality of rights under the law shall not be denied or abridged by the United States or by any state on account of sex," and it has had a renaissance in recent years, with three states ratifying it since 2017.

However, the bill may well be stymied after this vote.

Senate Majority Leader Mitch McConnell, R-Ky., said earlier this month that he's "personally not a supporter" of the amendment, and the Trump administration's Office of Legal Counsel has said that it considers the ERA "expired."

In addition, there isn't legal consensus that Congress can remove the deadline in this way.

The amendment, proposed in 1972, originally had a ratification deadline of 1979 attached to it. Congress later bumped that out to 1982, but by then, only 35 states had ratified it. Thirty-eight states need to ratify in order for a proposal to become an amendment.

Illinois and Nevada ratified the amendment in recent years, and in January, Virginia became the 38th state to ratify.

But the deadline has never been further extended beyond 1982. The bill passed by the House on Thursday would retroactively remove that deadline.

Supporters argue that removal would allow the amendment to become a part of the Constitution.

In floor speeches Thursday morning, Democrats framed the amendment as being about fairness and inclusion. Some also made an economic argument.

"It's not just about women; it's about America," said House Speaker Nancy Pelosi, D-Calif. "The ERA will strengthen America, unleashing the full power of women in our economy and upholding the value of equality in our democracy."

Legal experts have argued that the amendment could protect women economically, like helping them get more equal pay and preventing pregnancy discrimination.

Republicans argued against the bill, saying that the amendment is unconstitutional, but they also particularly stressed the issue of abortion in their arguments.

"If ratified, the ERA would be used by pro-abortion groups to undo pro-life legislation and lead to more abortions and taxpayer-funded abortions," said Arizona Republican Rep. Debbie Lesko.

There are 13 Republican women in the House, and they were heavily represented among those arguing against the ERA.

The amendment could impact abortion-related funding and regulations, and some abortion-rights proponents see the amendment as a way to bolster abortion rights. However, as constitutional law expert Martha Davis stressed to NPR in January, it's not entirely clear what the impact would be.

The so-called three-state strategy to get to 38 states is one strategy that ERA defenders had been hoping for years would result in success. The other route — starting over with a fresh amendment — could be far more time-consuming.

However, it is one that some proponents have still been working at. New York Rep. Carolyn Maloney has reintroduced the Equal Rights Amendment multiple times.

On Monday Supreme Court Justice Ruth Bader Ginsburg said she thinks that Congress should junk the current amendment and start over from scratch.

"I would like to see a new beginning," Ginsburg told an audience celebrating the 100 year anniversary of the 19th Amendment. In particular, Ginsburg expressed concern about the validity of the ERA's post-deadline ratification process.

Ginsburg pointed out that "if you count a latecomer," like Virginia or Illinois, "how can you disregard states that say, 'We've changed our minds?' "

Indeed, there are five states — Kentucky, Nebraska, Tennessee, South Dakota and Idaho — that originally voted to ratify the ERA but have since rescinded their ratification. In fact, all five states withdrew before the 1982 deadline. If these states are allowed to rescind, then even with the addition of the three new states, the ERA would only have 33 ratifiers — well short of the 38 needed to become part of the Constitution.