Accessibility links
Narrated By Ringo Starr, Harry Nilsson's 'The Point' Gets Digital Release 50 years after Harry Nilsson's concept album about a round-headed boy from a land of pointy heads, his son Kiefo and actor Mike Lookinland talk about a new release of the animated film from 1971. 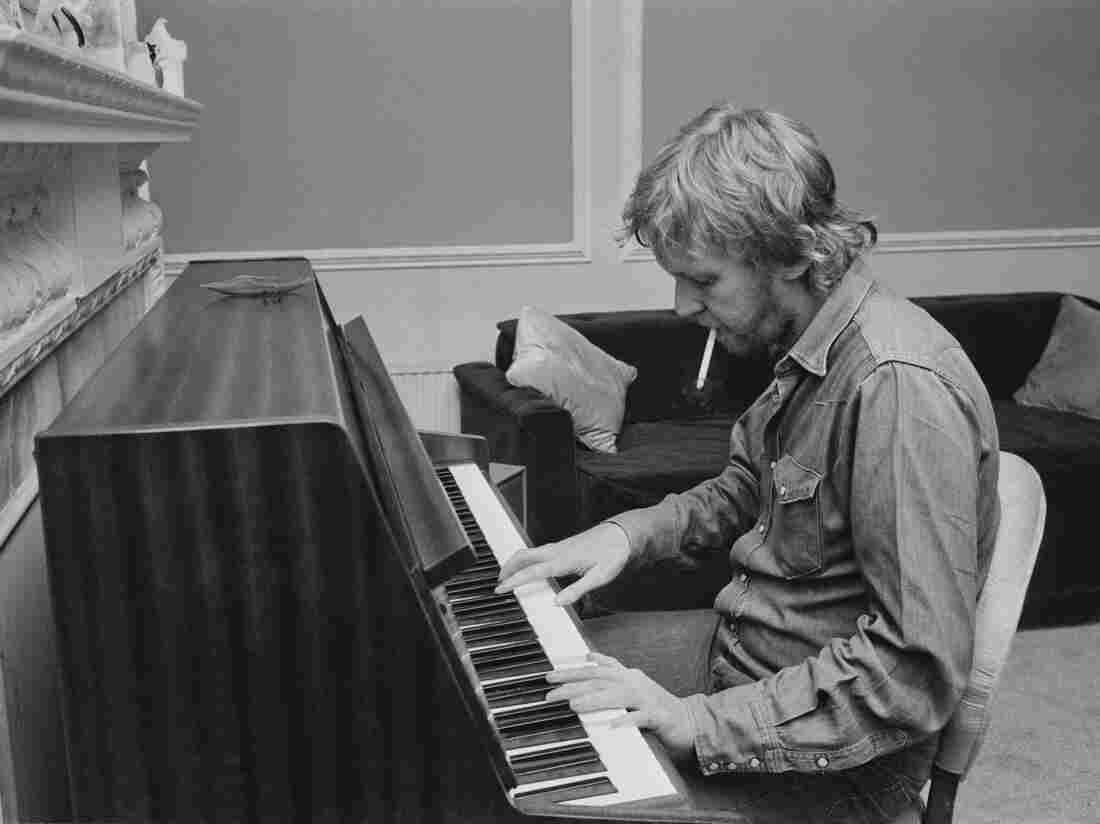 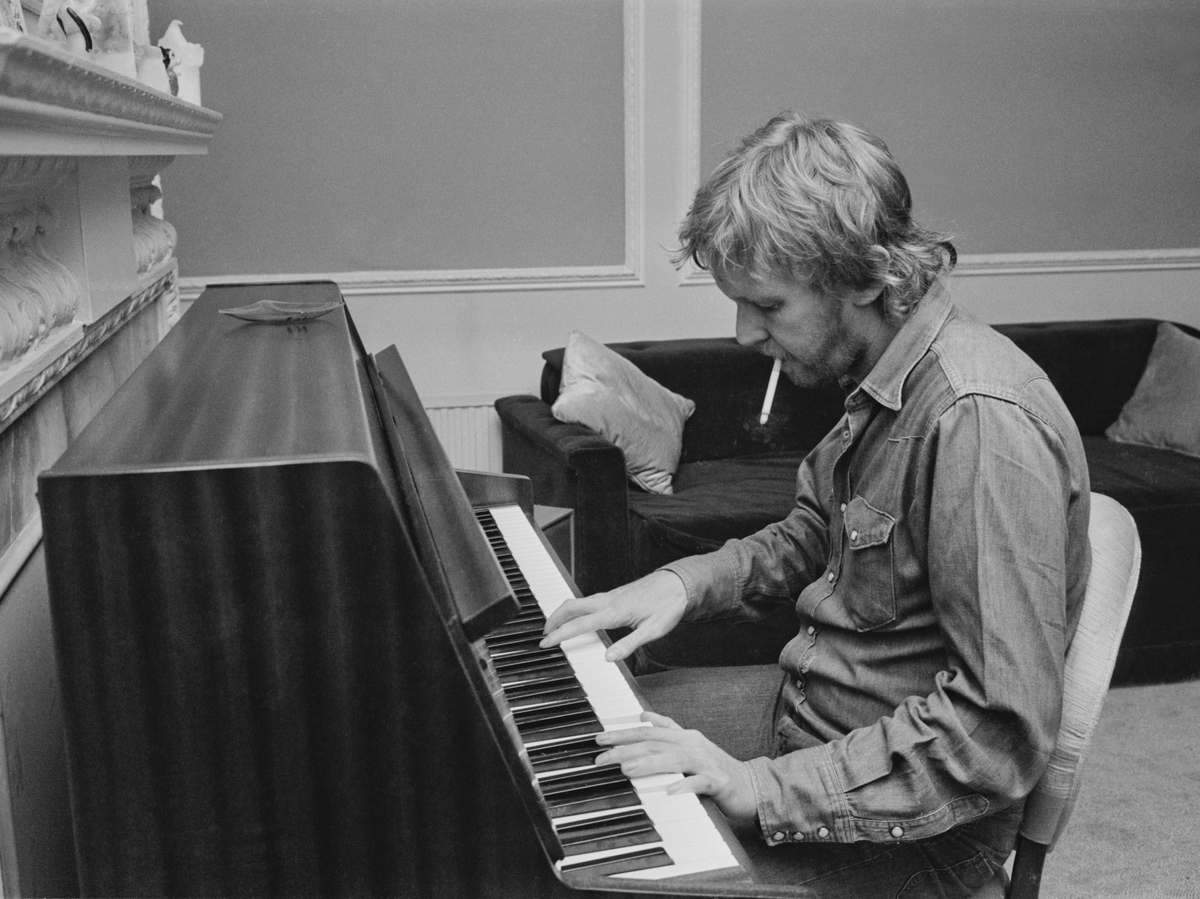 Harry Nilsson's concept album The Point — about a round-headed boy in a world where everything is pointy — turns 50 this year.

Harry Nilsson's concept album The Point turns fifty this year; to celebrate, the 1971 animated film adapted from the music will be released digitally and on BluRay for the first time. Nilsson, a beloved if occasionally overlooked writer of late 1960s pop hits, died in 1994, but his strange and endearing fairy tale album still resonates with those that remember it.

Featuring narration by Ringo Starr, The Point tells the tale of a boy named Oblio, the lone round-headed person in a kingdom where everything is pointy, including the citizens. Oblio, and his dog Arrow, are banished to the Pointless Forest and must find their way back to the kingdom.

NPR's Scott Simon spoke to Mike Lookinland, who voiced Oblio and went on to play Bobby on The Brady Bunch, and Kiefo Nilsson, Harry's son, about their memories of the film and the simple power of Harry Nilsson's songwriting. Listen to their full conversation in the player above and read on for highlights from the interview.

On working on the original animated film

Mike Lookinland: Even as a 9-year-old, I could really see the artistry, the evident talent of these guys — Harry Nilsson, of course, but also the animators — and it was a thrill. But as a kid working in the business, at the time it would have been really just another job. But boy, in retrospect, it has turned out to be the thing I'm actually most proud of having been involved with. The Brady Bunch certainly had, overall, a much larger impact on my life in general, but I'm just really proud of having been involved with The Point.

On what makes The Point stand out as an animated film

Mike Lookinland: It sure is fun to see after all these years: I watched it this week. I'm a big fan of animation in general, but I was accustomed to seeing — the only people talking in cartoons are the ones who are the main characters talking to each other. It struck me in The Point, there's a lot of little asides in the crowd scenes, and especially in the courtroom scene where Oblio gets banished, where what you'd call bit players are talking to each other and they're not interacting with the main characters at all. I'd noticed that as a child to be something: this is different, this is cool. 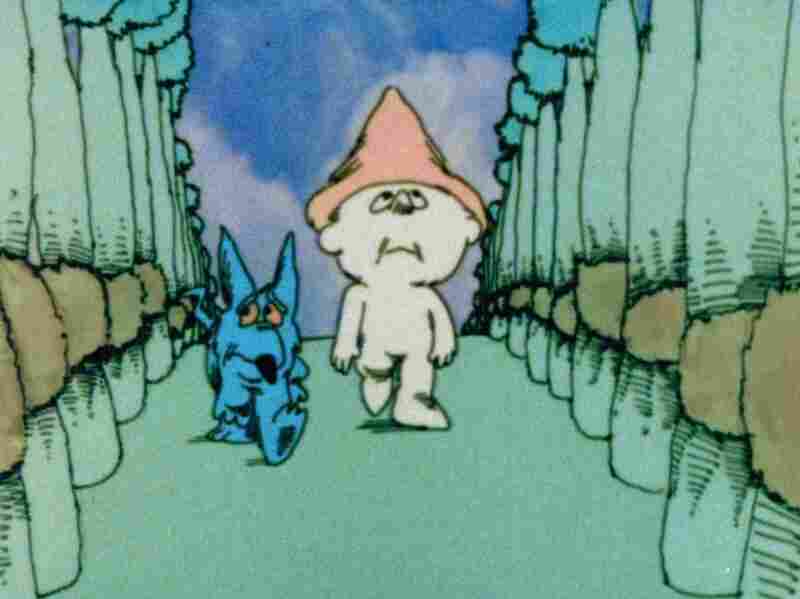 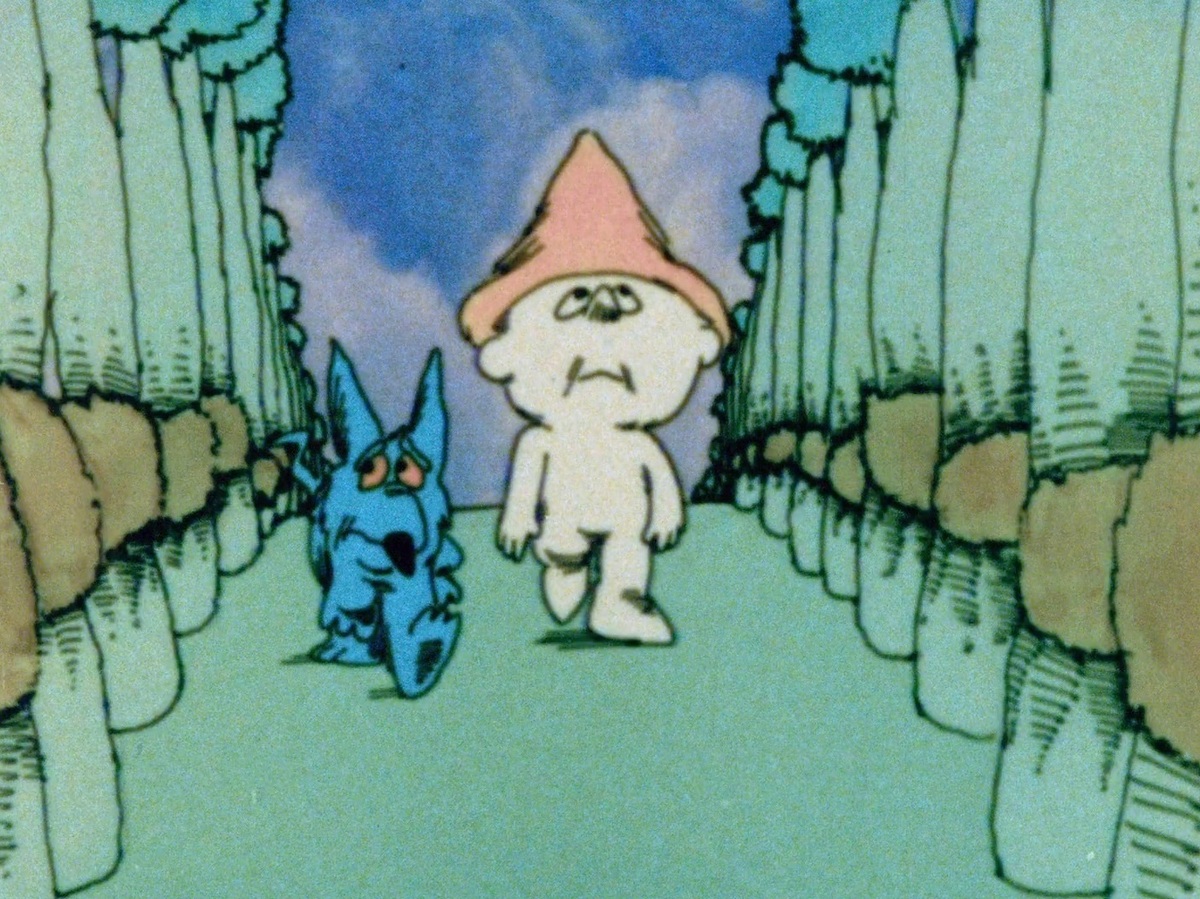 Oblio and Arrow in the Pointless Forest.

Kiefo Nilsson: I noticed that, too.It has almost a mature sense to it, it's almost like an adult layer. It's like adult commentary on what is otherwise a fairly childish fable, fairy tale thing. There's adult commentary happening of these characters in the background that murmur, but the comments they make, it's like they're watching the movie with you in a way and they kind of turn to you. That concept, to have these murmuring characters around, I always found that to be really funny.

On the songs Harry Nilsson wrote for the album

Kiefo Nilsson: I've produced a concert of the material several times, and [the music] accomplishes what it sets out to do in a very minimalist way. It really is a testament to the power of a great melody and great lyrics. There's an interesting thing with the tonality, because it's almost entirely major chords and a couple of dominant chords, and only one minor chord. [To audience] To the non-musicians: It's a little bit different to do things that way. Despite that, it still creates a lot of emotional depth because the melodies go to so many different places.

On the resonance of the film's message 50 years later

Kiefo Nilsson: I think that it is essentially a timeless story. It hits on a lot of different themes: you have the hero's journey, the coming of age journey, you have the boy who goes on an adventure with his dog, that kinship there. Then the themes beyond that: of prejudice and acceptance and our perspective. I think [that] is one of the biggest: how different perspectives on the same situation can create different (either) problems or solutions.

NPR's Ned Wharton and Dorothy Parvaz produced and edited the audio of this interview. Cyrena Touros and editorial intern Jon Lewis adapted it for the Web.