Accessibility links
At The 'Super Bowl Of Turkey Calling,' The Goal Is Recruiting New Hunters Hunting is on the decline in some parts of the country. At this week's National Wild Turkey Federation convention, advocates want to create future hunters, especially women. 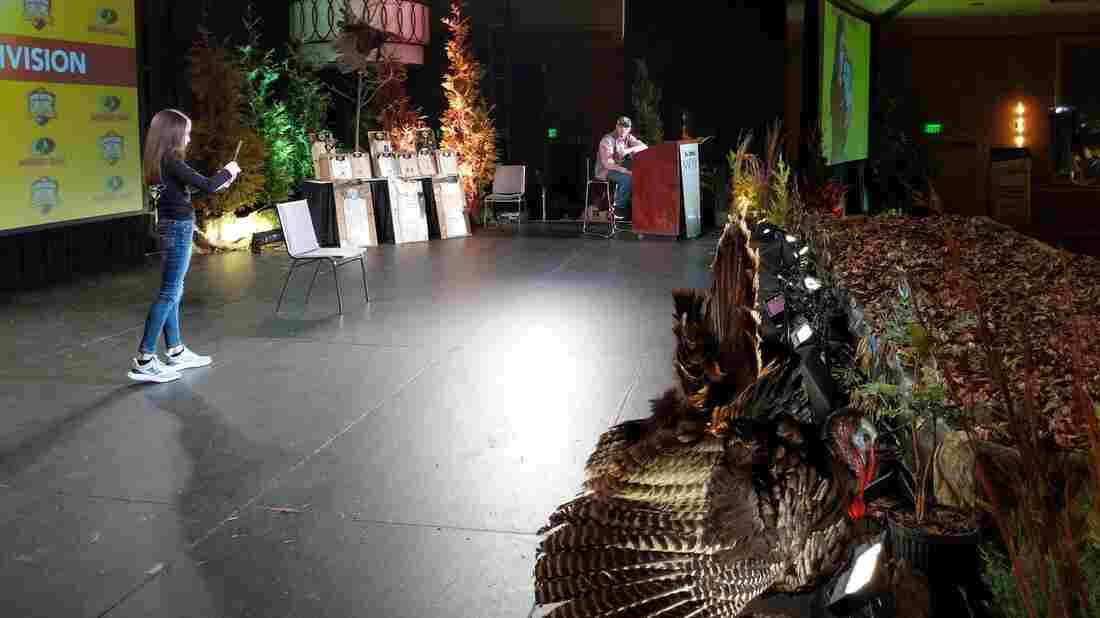 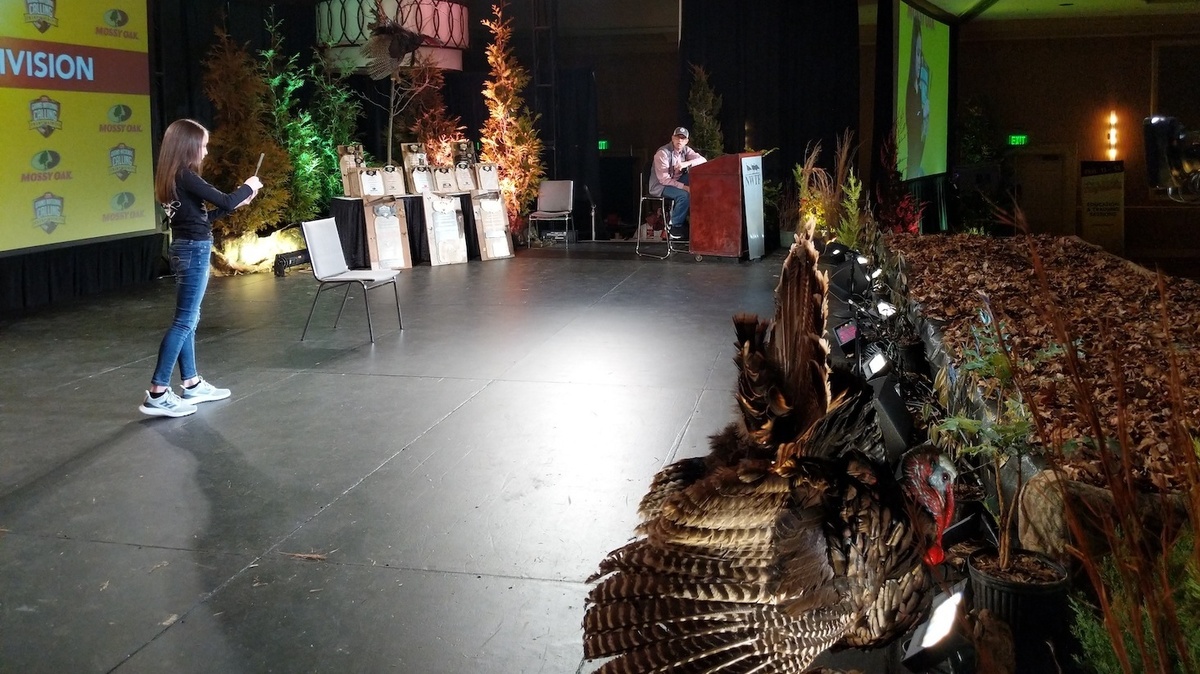 Brooke Simpson, age 10, makes a turkey call on stage at the Grand National Calling Championships in Nashville on Feb. 14.

An estimated 50,000 people have been in Nashville this week for the National Wild Turkey Federation's annual convention. The centerpiece of it all, happening this weekend, is the calling contest — where contestants try to mimic the bird so well that the judges are convinced a live turkey is in the house.

It's part of the organization's efforts to recruit new hunters into the fold, at a time when the sport has been declining in popularity.

The math behind this competition, sometimes casually referred to as "the Super Bowl of turkey calling," is simple: The more contestants sound like a wild turkey, the higher they score. They often use hand-operated instruments that create friction and can imitate, say, a yelping hen.

"The cadence of the bird, when it yelps — things like that. There are a lot of things going on," he says. 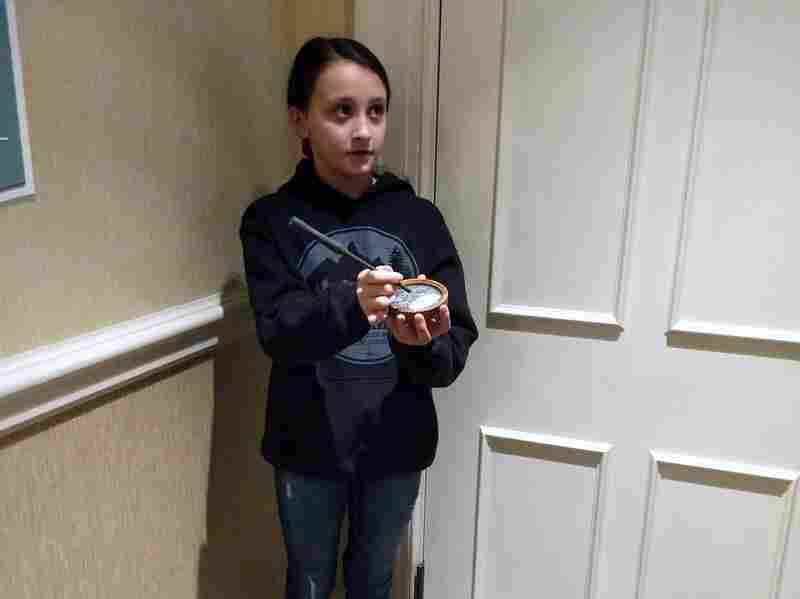 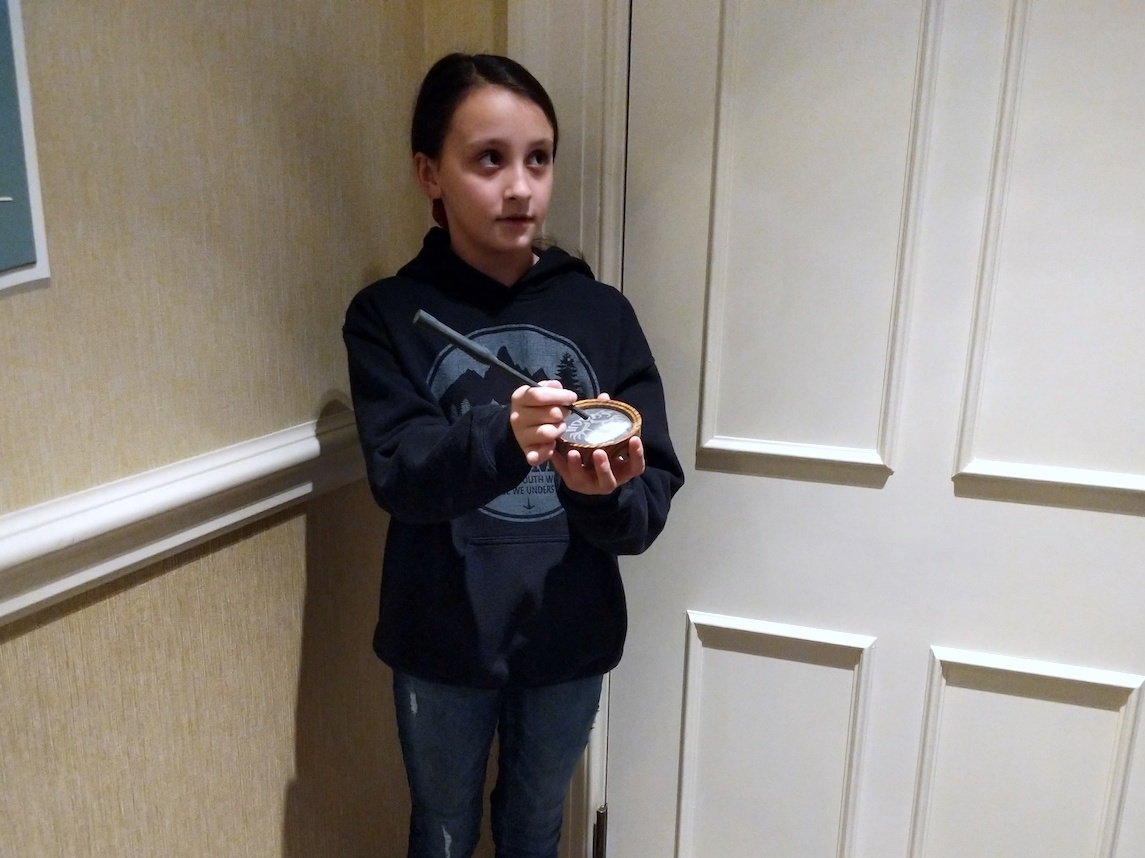 Brooke Simpson rehearses with a device that mimics different types of sounds a turkey makes.

At the youth competition Friday night — called "poults," for the name of a young turkey — Simpson's 10-year-old daughter, Brooke, is waiting to go on stage. She got involved with hunting and calling young: She won her first calling competition at age 3.

By now, Brooke is one of the top young turkey callers in the nation. She's also one of the few girls who competes.

Boys, she says, do not intimidate her.

The whole point of turkey calling is to be a more successful hunter, luring the skittish bird within shooting distance. So when kids get interested in this part of the sport, they're more likely to try the hunting part, which is something the National Wild Turkey Federation wants to see.

"We've seen a decline in hunters pretty much since the 1980s," says Mandy Harling, the organization's director of hunting heritage programs.

Part of the federation's goal is to recruit new hunters. This includes kids, but also city-dwellers who want to find locally sourced meat. Or people who want a closer connection to nature — Harling points out that hunting fees and taxes on ammunition help pay for wildlife conservation.

And another target audience: women.

"If you can teach a mom to hunt, mom will take her kids in the woods," Harling says.

She knows this firsthand. She never hunted as a child, but she married someone who did. They went turkey hunting together and she was hooked. She loved watching the woods wake up. She loved the strategy that went into the sport.

"It was kind of crazy, but it was so much fun, and there's so much skill involved in it," she says.

Harling now takes the whole family with her.

Enthusiasts Encourage More Women To Give Hunting A Shot

But being a female hunter has had its challenges. When she started, women's gear was so bad that she had to hunt in her husband's clothes. That was uncomfortable. She says she didn't enjoy having him as her teacher.

Part of her job now is overseeing programs where women teach other women how to hunt.

"To learn from another woman, and take all those expectations out of it, really helped me personally," she says.

More women who hunt means more role models for girls like Brooke Simpson, who walks confidently into the spotlight with her turkey call instruments at the poults calling competition.

Brooke makes four calls, then walks offstage, looking relieved. At the end, the judges hand down their decisions.

Brooke takes third place — the best she's ever done at the grand nationals.

And beating her, in second, is another girl.