Accessibility links
Amid Climate and Housing Crises, Cities Struggle To Place Housing Near Transit San Bernardino County, Calif., is creating a commuter train that reaches the small city of Redlands. While good for the environment, some residents worry it will undo the city's slow growth measures.

Listen · 3:37 3:37
Amid Climate And Housing Crises, Cities Struggle To Place Housing Near Transit 3:37 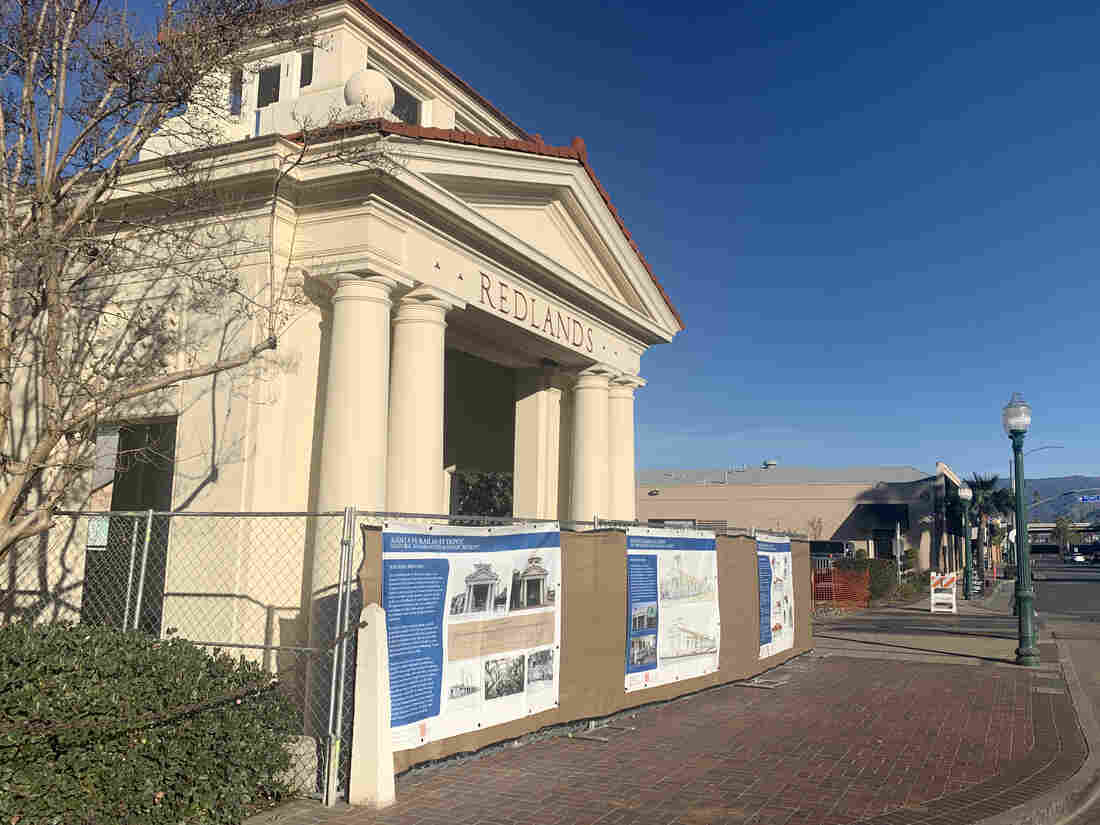 The Santa Fe Rail Depot in downtown Redlands, Calif., is the center of one of three "transit villages' where the city is trying to create livable, walkable communities. Benjamin Purper/KVCR hide caption 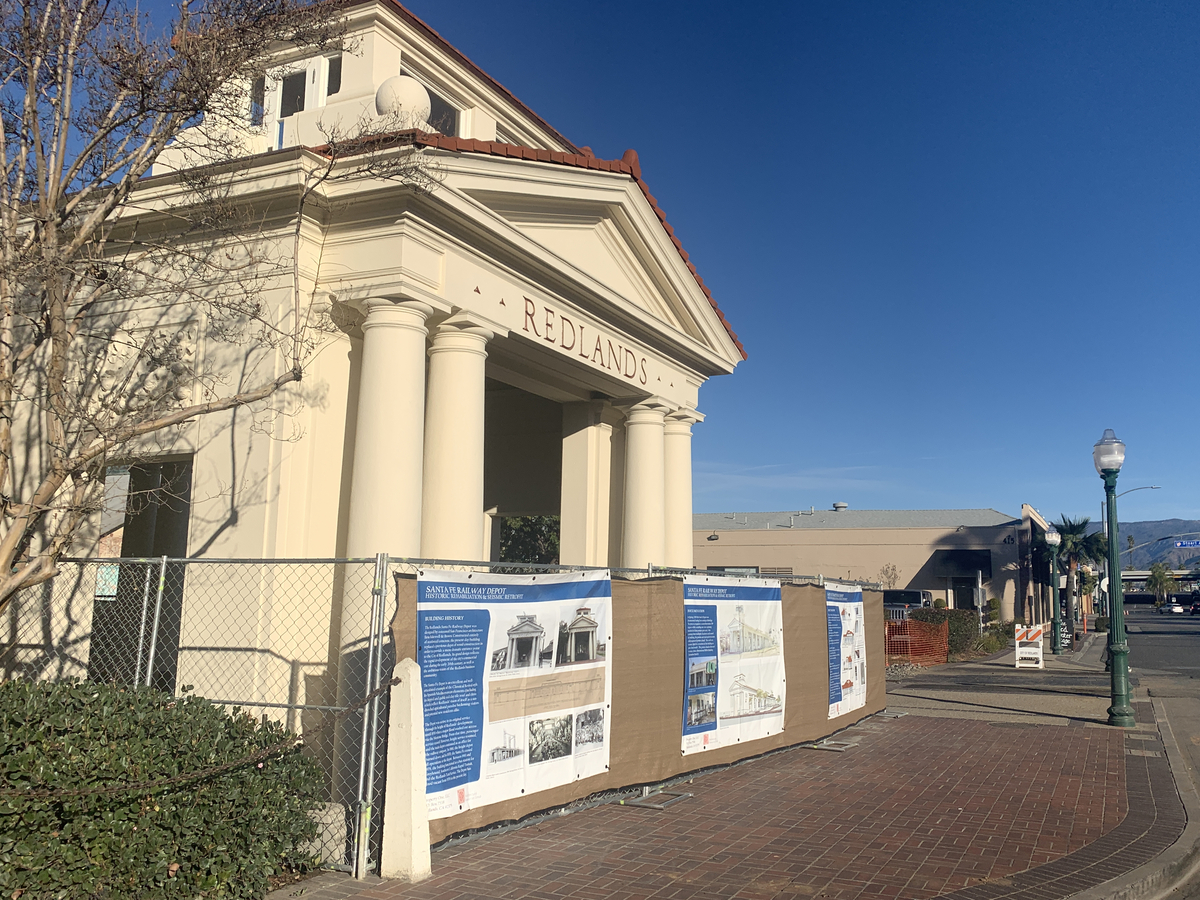 The Santa Fe Rail Depot in downtown Redlands, Calif., is the center of one of three "transit villages' where the city is trying to create livable, walkable communities.

Redlands, Calif., is known for its orange groves, its Victorian homes, and its small-town feel. Sixty miles east of Los Angeles, the city is home to about 75,000 people. But that number is expected to get a lot bigger.

"Redlands is already changing," says Mayor Paul Foster, "and this is just more of the future that's coming."

He's referring to a few sweeping changes coming to Redlands: an increased population and the arrival of a new train that will connect Redlands to the much-larger cities of San Bernardino and Los Angeles to the west.

The train uses zero-emission hydrogen fuel cell technology, which Foster says is good for the environment. San Bernardino County already has some of the worst air quality in the nation.

"The core intention of transit-oriented development is to reduce the carbon footprint," he says. "It's to get people out of their vehicles and to walk."

To that end, he and the city council have floated something called Measure G, which would exempt three "transit villages" around the city's three upcoming rail stations from Redlands' old slow-growth rules.

The new measure would lift current limitations on height and density within the transit villages, effectively allowing unlimited height apartment buildings and condos in a city where residential buildings are generally limited to two stories, or 35 feet.

The mayor has said he would eventually impose a new height limitation — about four stories — but that's not part of the measure before voters in state's March 3 primary.

"I think that it will really change Redlands forever. And we'll never be able to get it back," says resident Lane Schneider. 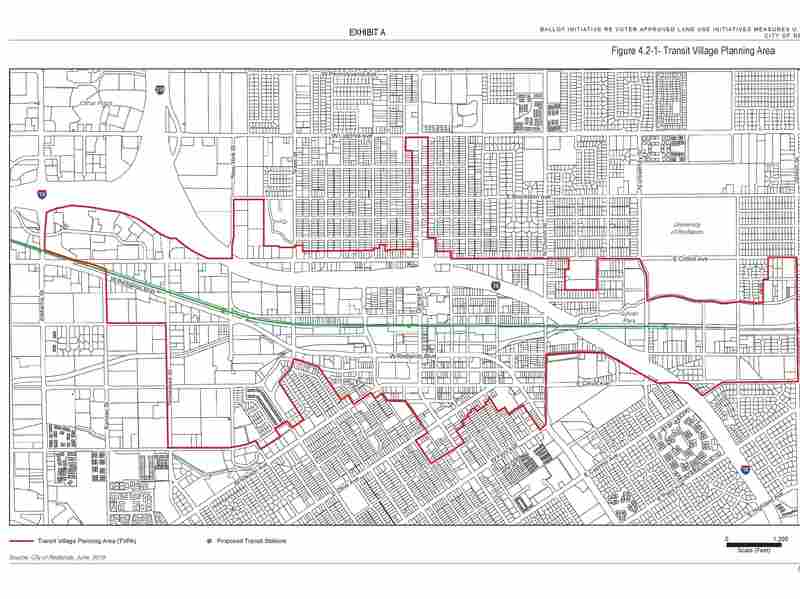 A map of the transit villages throughout Redlands. City of Redlands hide caption 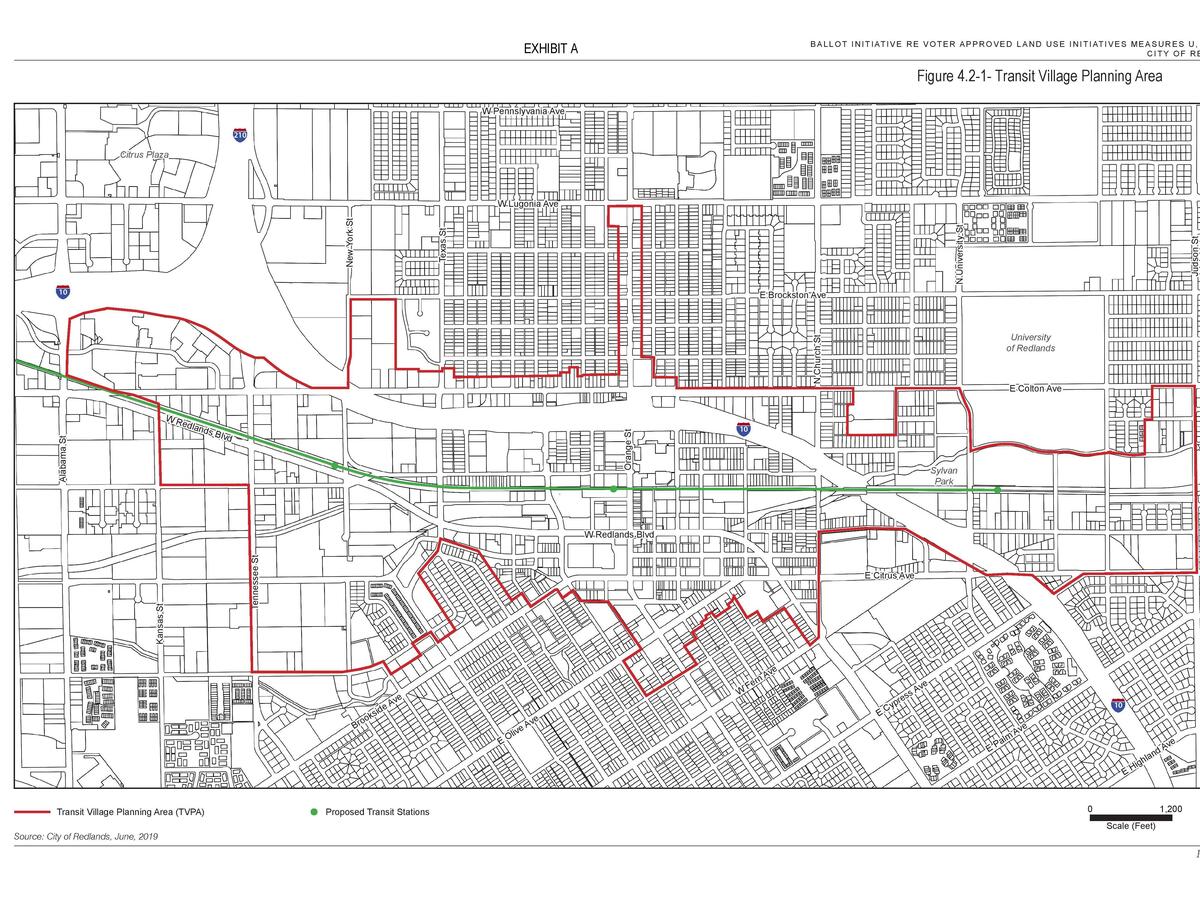 A map of the transit villages throughout Redlands.

According to Schneider, that would completely change the character and nature of the city.

"One of the things that most people have said about Redlands over the years is it's a city with a small-town atmosphere, and I think that if we pass Measure G, that will change," says Schneider.

Genevieve Giuliano, a professor of urban planning at the University of Southern California, says this debate over transit-oriented development changing the character of a small city is not new.

"It's very hard to change existing communities, especially when they're affluent and people are very active politically," Giuliano says. "It's a challenge."

Giuliano also says there's also a limit to what transit-oriented development can do. She says in the last several decades it's been touted as the end-all solution to congestion, air pollution, and now, climate change.

"None of those things were solved, or are going to be solved by transit-oriented development," she says.

Still, many small but growing cities around the country are trying to manage growth responsibly by placing housing near public transportation. And, transit-oriented development does have an effect on greenhouse gas emissions.

A study of the Chicago metropolitan region by the Center for Neighborhood Technology found that households living within a half mile of public transportation and outside of downtown had 43% lower emissions than those not located by transit. That number increased to 78% lower emissions for households located downtown and near transit.

That's why people question whether development of multi-story condos and apartments buildings near walkable shopping areas and transportation hubs will actually get residents to leave their cars in smaller cities such as Redlands.

"It really depends on the attractiveness of the transit system itself," Giuliano says. "How well can you get around on that transit system, that's what's really important."