Accessibility links
Review: 'The Only Child,' By Mi-Ae Seo Mi-Ae Seo's novel has a great premise: The Bad Seed meets The Silence of the Lambs. But this tale of a psychologist and her creepy stepdaughter is hampered by its structure and stilted, strange prose. 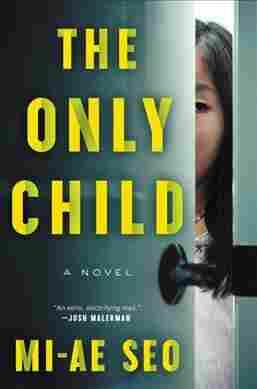 When reviewing books in translation, there's always that nagging question: how much of the prose on display is the result of the translator making changes versus the author's original intention? I admit this question nagged me to a startling degree while reading The Only Child by Mi-Ae Seo, translated from the Korean by Yewon Jung.

The Only Child is one of those books that comes with a catchy premise: The Bad Seed meets The Silence of the Lambs. Psychologist Seonkyeong is interviewing a serial killer who left behind a long list of dead women. At the same time, Hayeong, her husband's daughter from a previous marriage, has moved into their home after the death of the girl's grandparents in a mysterious fire. From the beginning, Seonkyeong feels there's something troubling about the child, who flings herself into episodes of startling rage. Could Seonkyeong have a budding serial killer as a stepdaughter?

The problem of The Only Child, dang it, is the prose. It feels stilted and odd. When Seonkyeong meets Hayeong, she remembers that her husband "had said that his ex-wife wouldn't allow him to see the child. So after the divorce, he never saw her." Most editors would have cut one of those sentences because they are repetitive. You can picture a better paragraph telling us "after the divorce, he never saw the child: His wife wouldn't allow any visitations," or something similar. Bits like this abound, along with strangely choppy paragraphs.

When you're mentioning one of the most famous thrillers of all time, you'd better be pretty good in comparison.

The other element that doesn't help is the novel's literal invocation of The Silence of the Lambs, comparing its psychologist to Clarice Starling. When you're mentioning one of the most famous thrillers of all time, you'd better be pretty good in comparison. But Seonkyeong, who essentially blushes like a teenager in the presence of a serial killer — "if they had been meeting by chance somewhere else, her heart would have fluttered at that smile" — does not have Clarice's strength and determination. And the killer, whose gaze slides "down from her face to her chest," is no cannibal genius gentleman.

Under most circumstances, Seonkyeong would be a highly sympathetic protagonist. Her annoying husband essentially dumps a traumatized, perhaps dangerous, child in her hands, after all. But once again, the prose and structure of the novel prevent the reader from feeling much for our protagonist, especially because she hardly seems to act like an adult. Rather than a criminal psychologist who also happens to be a teacher, you'd think Seonkyeong is a first year university student.

The multiple points of view don't help matters much, as we get to hear the thoughts of the dangerous stepdaughter and the inner woe of a serial killer who is really quite dull. Surprise! Mom is to blame for his issues; she was "made of cold wire, and had poked him all over his body. A mother who was beautiful, but cold and cruel." I wonder if we have Norman Bates to thank for enshrining the terrible mother in pop culture, but Mrs. Bates had Gothic horror chops aplenty and Psycho was a box of lurid candy.

The marketing materials for The Only Child promised it would keep me guessing until the last page, but that didn't happen — at least not in the way the publicity department intended. I did keep wondering if it would read differently in its original language, and circling back to the conundrum of things lost in translation. But even then, I think the novel's structure doesn't allow for that many thrills.

Good elevator pitch, not so great final result, though I can actually picture a fairly cool movie coming out of this if adapted properly. Netflix, take note.

Silvia Moreno-Garcia is an award-winning author and editor. Her most recent novel is Gods of Jade and Shadow. She tweets at @silviamg.