Accessibility links
'Broken Faith' Author: Abuse Within Word Of Faith 'Got Worse Over Time' Pulitzer Prize winner Mitch Weiss and Holbrook Mohr detail the alleged secret life of abuse in the Word Of Faith Fellowship: "They take more and more control of your lives" over time, they say. 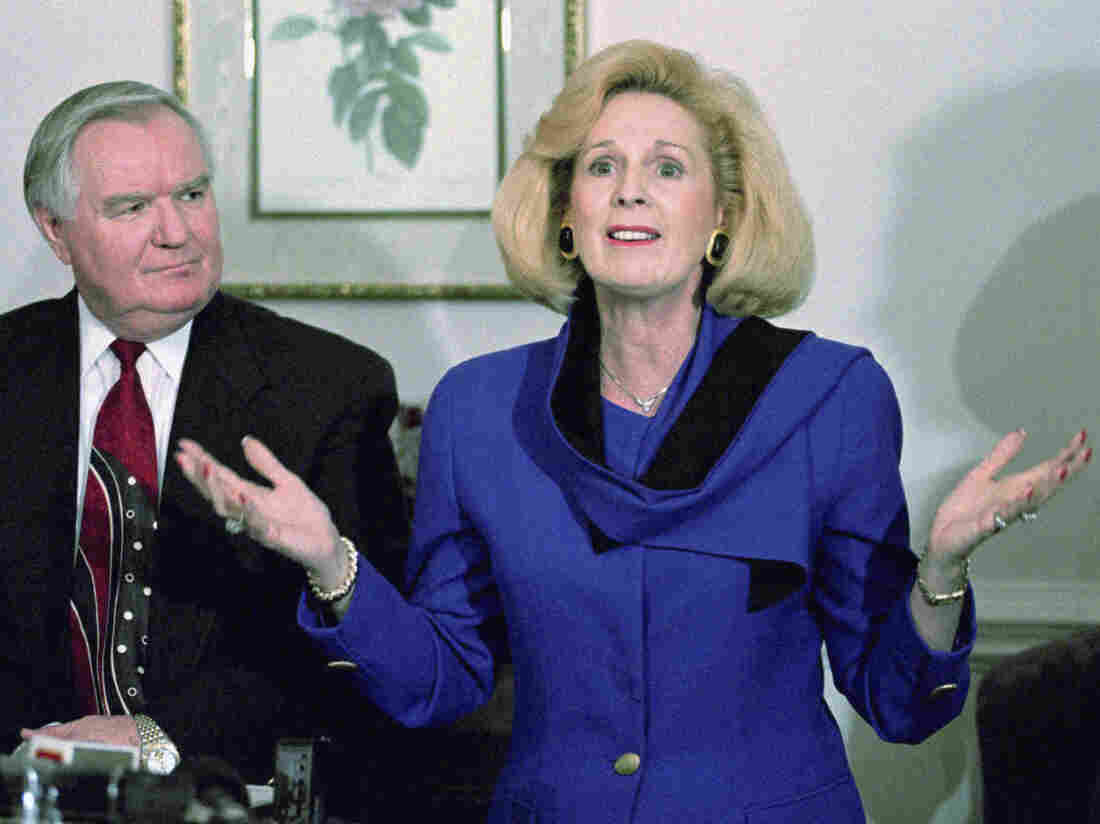 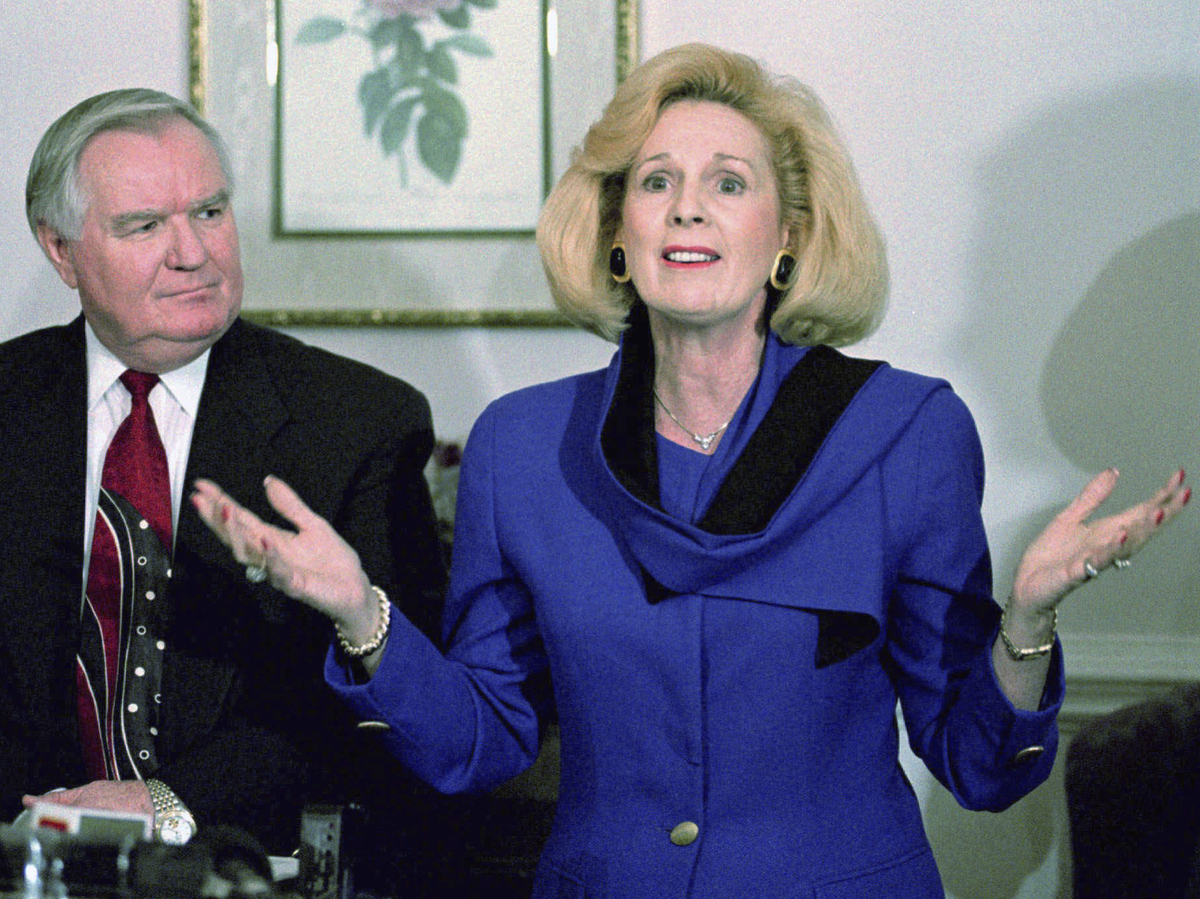 In this March 2, 1995 file photo, Word of Faith Fellowship church leader Jane Whaley talks to members of the media, accompanied by her husband, Sam, in Spindale, N.C.

In 1979, Jane Whaley and her husband, Sam, started the Word of Faith Fellowship church in North Carolina. 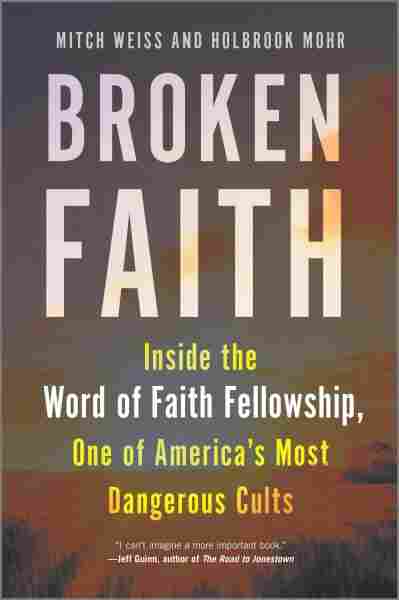 Inside the Word of Faith Fellowship, One of America's Most Dangerous Cults

by Mitch Weiss and Holbrook Mohr

Title
Broken Faith
Subtitle
Inside the Word of Faith Fellowship, One of America's Most Dangerous Cults
Author
Mitch Weiss and Holbrook Mohr

In recent years, the organization has been investigated for alleged abuse of its congregants — and has faced other charges ranging from fraud to human trafficking.

Pulitzer Prize winner Mitch Weiss and Holbrook Mohr, journalists who have been exposing these stories, spent time interviewing hundreds of people who have been connected to the church over the years — and also acquired secret recordings, videos and documents for their new book Broken Faith: Inside the Word of Faith Fellowship, One of America's Most Dangerous Cults.

On what people saw in church pastor Jane Whaley

Mohr: I think that in the beginning, when people would go to the church, they were shown a lot of love. You know, the members of this church, they live in nice homes. They drive nice cars. The children are well-mannered. They have a Christian school. So I think when a lot of families first go there, everything seems great. But over time, Jane Whaley and her other ministers, they take more and more control of your lives. In fact, a lot of times they'll remove children from their family's home and place them with ministers to be raised. And what that does is over time, sometimes those kids care more about the ministers than their own parents. So it makes it difficult for families to leave. So it's not a quick thing where you just walk in the door and they say, hey, come on in. You can come in and you can never leave. We're gonna take your television, magazines, radio, all that away from you and institute all these rules. It's a slow, progressive thing.

On using family members against one another

Weiss: You have to realize they believe that Jane Whaley was a prophet, that God spoke to her and everything she said was the gospel. And one of the techniques that she used was that she had everybody inform on each other. And the reason they did that was because that was the godly way of doing things. It was, in a way, she would have them tell her their deepest, darkest secrets. And then she kept a file of those secrets. And if they threatened to leave or did something wrong, she had all the evidence she needed there to keep them in line.

On reconstructing a pattern of violent physical abuse

Weiss: Yes, it was something that really got worse over time. And you have to understand what her philosophy is. The doctrine is really pretty simple — devils are real. And if you're a drug addict, it's because you have this drug devil. If, you know, you're an alcoholic — the same. If you're having an affair, it's the same thing. There are lustful devils. And so what she would do is it was called Devils in Deliverance, where they would have people surround you and scream at you to get the devils out. Get out, devil. And it would go on and on and on. Perfect example is with a baby. If babies cried, it wasn't because they were hungry or they had a dirty diaper. It was because there was a devil inside them that was making them cry. So you would have groups of people surrounding an infant and screaming until that baby would just get tired and finally, you know, go to sleep....

And that's how she started at the beginning with her congregants. Over time, it became more and more violent. It wasn't enough just to scream, to scare the devils out of people. Now you had to punch people. You had to hold them down and restrain them. You had to choke them. You had to do everything possible to get rid of that devil. And that's when it became extremely violent. That's where the people who've recounted their stories would break down to us. They would tell us about their injuries. And they couldn't go to doctors. They couldn't be treated because they knew what would happen. So they had to keep it secret. But it's those beatings that really still seared into their brains now. They can't get rid of those images, those nightmares.

On whether anyone has been held accountable for the alleged abuse

Mohr: There are five people currently charged with assaulting a former member of the church. Matthew Fenner, who says that he was beaten to expel his homosexual demons back in 2013. But, so far, nobody has been convicted in that case. And Matthew Fenner's waiting for justice. ...

Weiss: You have the sheriff. You have the district attorney. You have all these people who have looked the other way, who know what's going on, and they're just not doing their job. This church now is thriving.

[Editor's Note: When NPR reached out to District Attorney Ted Bell, he responded via email: "Under my administration we have prosecuted allegations of abuse as well as worked with federal investigators and the US Attorney's Office in seeking prosecution at the federal level of violations of federal law." NPR also sought comment from the Word of Faith Fellowship and the sheriff of Rutherford County, N.C.]