Accessibility links
Poll: Bloomberg Makes Democratic Debate, Sanders Leads The survey by NPR/PBS NewsHour/Marist gives the former New York mayor enough polls showing him over 10% nationally to be on stage for the next Democratic debate Wednesday in Nevada. 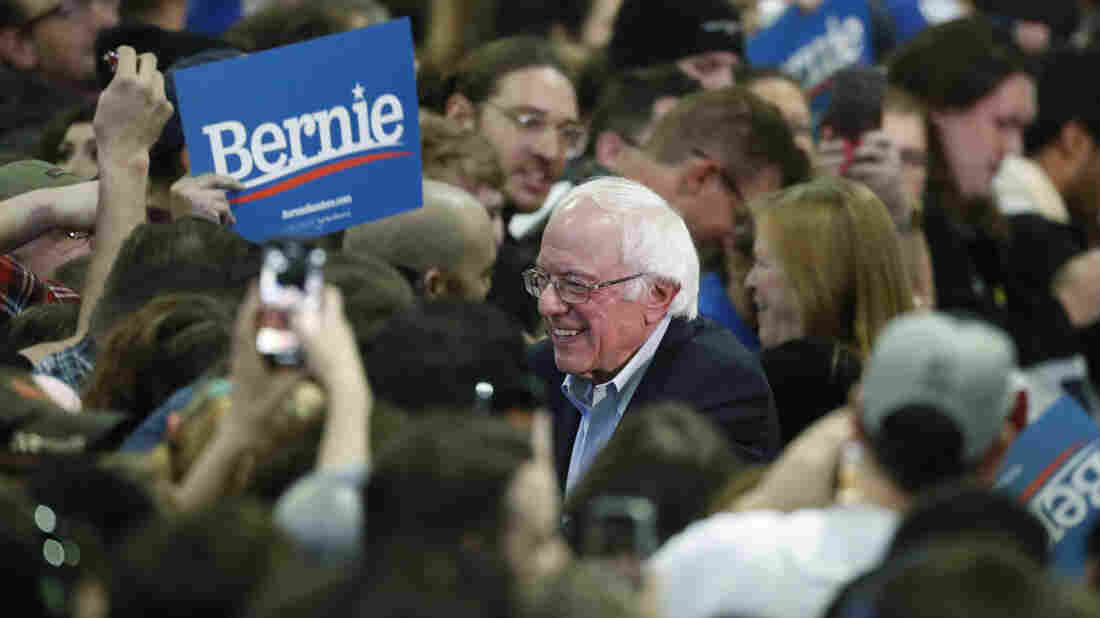 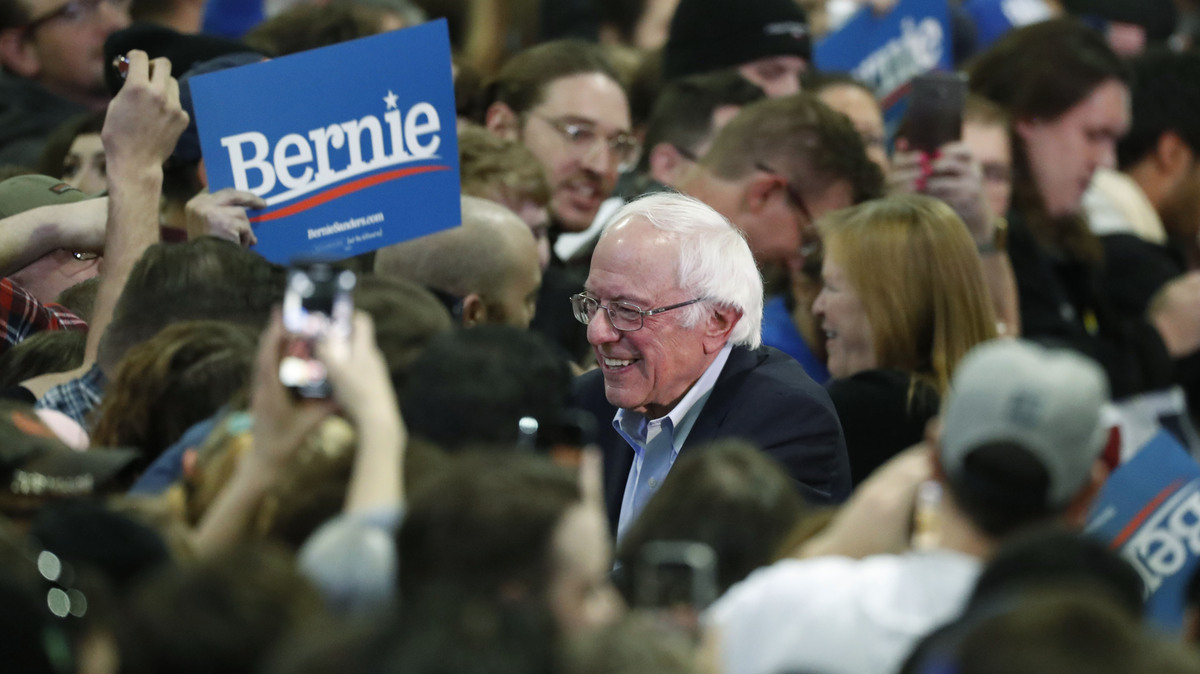 Sen. Bernie Sanders has opened up a wide lead among Democratic voters nationally, according to a new NPR/PBS NewsHour/Marist poll.

Vermont Sen. Bernie Sanders has opened up a double-digit lead in the Democratic nominating contest, according to a new NPR/PBS NewsHour/Marist poll.

Sanders has 31% support nationally, up 9 points since December, the last time the poll asked about Democratic voters' preferences.

His next closest contender has 19%. But that second-place rival is former New York City Mayor Michael Bloomberg. With this poll, Bloomberg has qualified for the Nevada debate, despite not being on the ballot there for Saturday's caucuses.

Many Americans have become familiar with Bloomberg lately in this race because of his ubiquitous TV ads. But now get ready to see him on the debate stage for the first time Wednesday.

Bloomberg campaign manager Kevin Sheekey called the new poll result the latest evidence of a "groundswell" for the candidate.

We’re headed to Nevada! Our campaign is seeing a groundswell of support across the country, and qualifying for the February 19 debate is the latest sign that @MikeBloomberg’s plan and ability to defeat Donald Trump is resonating with more and more Americans. https://t.co/TrPLLBw7T7

Bloomberg, a multibillionaire, has spent more than $300 million of his own money on ads, and despite not competing in the first four states of the nominating process, he's vaulted now into second place nationally. 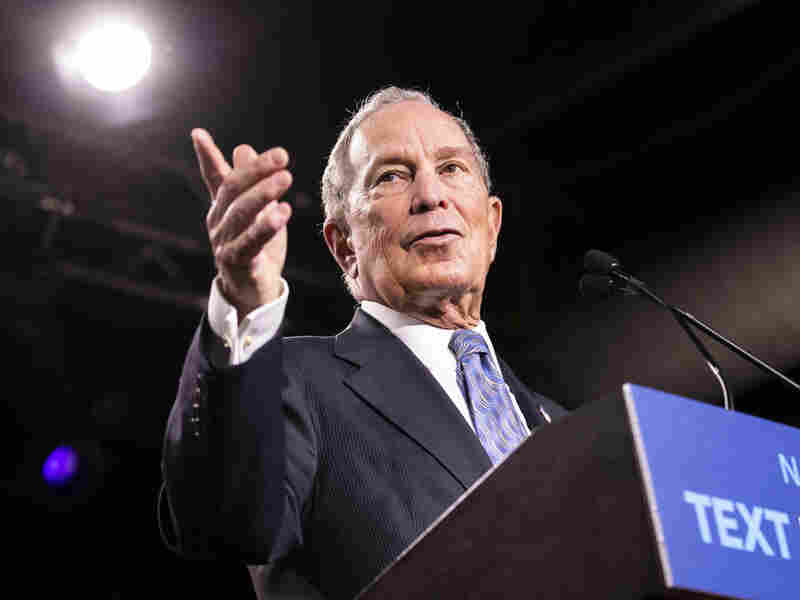 Former New York City Mayor Mike Bloomberg has qualified for the next debate in Nevada, but he isn't actively competing in contests that take place until March. Brett Carlsen/Getty Images hide caption 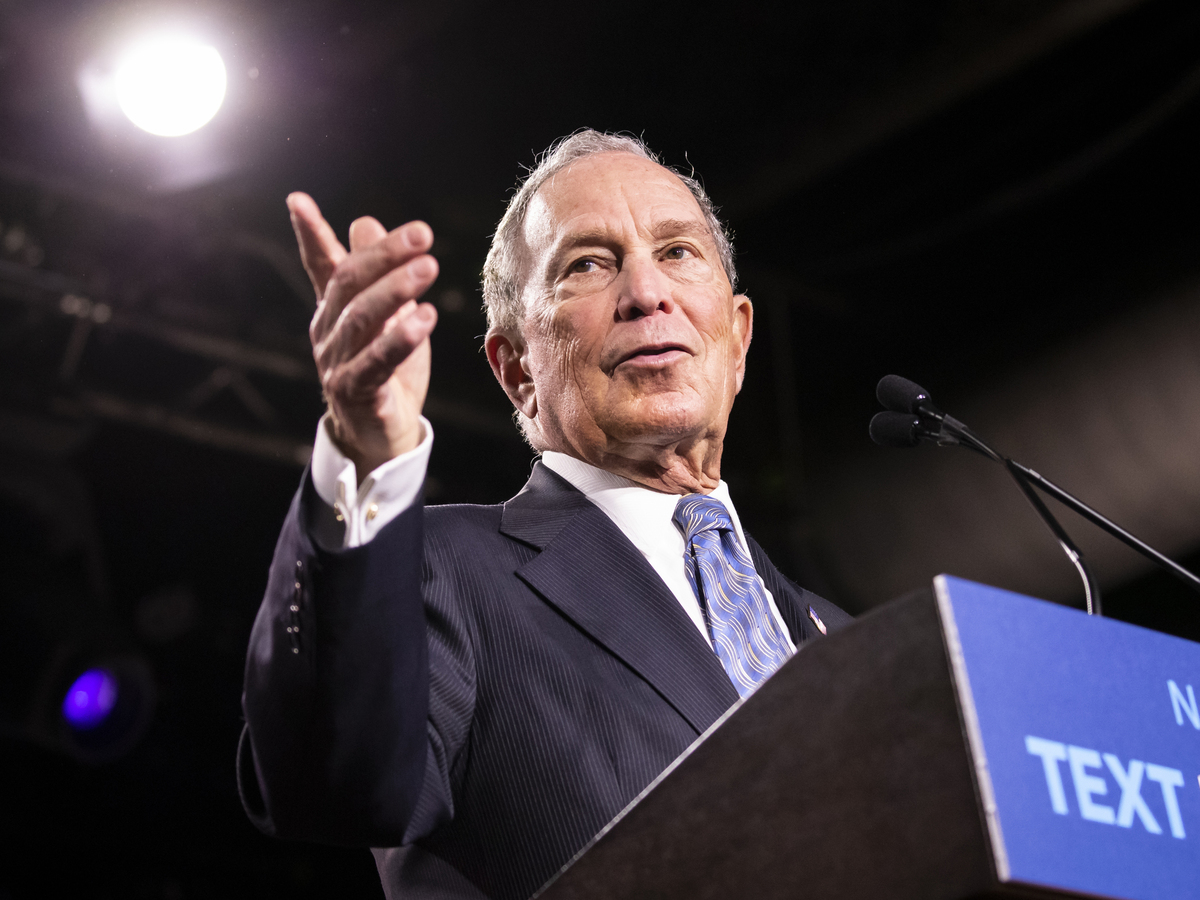 Former New York City Mayor Mike Bloomberg has qualified for the next debate in Nevada, but he isn't actively competing in contests that take place until March.

In recent days, Sanders and Bloomberg have upped attacks against each other. Sanders has taken aim at Bloomberg for the amount of money he has spent in the campaign, accusing him of trying to buy the nomination.

He tweeted that Bloomberg "will not create the kind of excitement and energy we need to defeat Donald Trump." Bloomberg responded by tweeting a video compilation of attacks leveled against fellow competitors by Sanders supporters online and stressing it's important to "unite" and that "this type of 'energy' is not going to get us there."

We need to unite to defeat Trump in November. This type of "energy" is not going to get us there. https://t.co/bPuUZMs2d6 pic.twitter.com/Tdp6mpWjcX

Third among Democratic voters and Democratic-leaning independents is former Vice President Joe Biden with 15%, down 9 points since December.

The debate Wednesday, as well as Biden's performance in Nevada Saturday and South Carolina a week later, are critical to whether the former vice president has a real chance at the nomination after disappointing fourth- and fifth-place showings in Iowa and New Hampshire, respectively.

Following Biden is Massachusetts Sen. Elizabeth Warren at 12%, also down from December — by 5 points — after poor showings in Iowa and New Hampshire.

Next is Minnesota Sen. Amy Klobuchar at 9%. She's up from 4% in December after surprisingly good finishes in the first two contests, and she has leaped ahead of Pete Buttigieg in this national survey.

The former South Bend, Ind., mayor is at just 8%, down from 13% in December, not a good sign for the candidate after very solid finishes in the first two contests. Buttigieg is the delegate leader, one ahead of Sanders. He won the most national delegates out of Iowa and, though he narrowly finished second to Sanders in New Hampshire, they tied with the same number of delegates out of the state.

The poll result is especially inauspicious for Buttigieg heading into Super Tuesday, March 3, in what will be essentially a national primary, with 16 contests and more than a third of all delegates up for grabs on that single day.

The one thing Biden can continue to hang his hat on is how well he does against President Trump. All of the top six Democrats the poll tested beat Trump in a head-to-head matchup, but Biden does best, beating Trump by 6 points and the only candidate to reach 50%.

In this survey, Sanders has broad support. He leads, as expected, with those younger than 45, progressives, in cities and among those without college degrees. But he also leads with women; college graduates, including white college graduates; in the suburbs and rural areas; and is second with black voters, within the margin of error, to Biden.

Bloomberg leads with moderates and voters older than 45, showing the clear split in the party, and where Bloomberg's appeal is and might grow if he does well on Super Tuesday. Bloomberg is also second with women, voters without a college degree and in rural areas. He also is third with black voters, showing that if Biden doesn't do well in South Carolina and drops out before Super Tuesday, Bloomberg might stand to benefit.

In 2016, Democrat Hillary Clinton won 89% of black voters nationally against Trump, according to exit polls.

The live-caller telephone survey of 527 Democrats and Democratic-leaning independents was conducted by the Marist Poll at the Marist Institute for Public Opinion. The poll has a margin of error of +/- 5.4 percentage points.