Accessibility links
'Dark Towers' Is A Cautionary Tale Of Deutsche Bank Pursuing Profits At Any Cost President Trump's relationship with Deutsche Bank is still under investigation, so David Enrich's story is necessarily incomplete. But he shows the bank's tale is complex — more than one gone rogue. 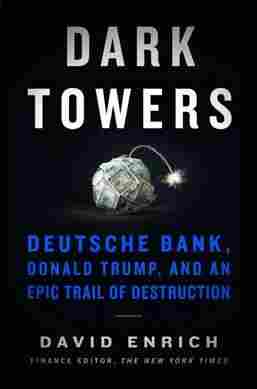 Some of the world's largest and most powerful banks spent the past decade mired in scandal, but none descended as far into ignominy as Germany's Deutsche Bank. Its rap sheet includes a staggering array of ethical and legal lapses, including money laundering, tax fraud and sanctions violations — not to mention mysterious ties to President Trump that federal investigators are even now looking into.

How this plodding, conservative bank from a country famous for diligence and thrift turned into the most infamous casino on Wall Street is the subject of David Enrich's excellent, deeply reported book Dark Towers: Deutsche Bank, Donald Trump, and an Epic Trail of Destruction.

It is by now a familiar story. "This proud national icon was seduced by the siren song of Wall Street riches," Enrich writes. Thanks partly to deregulation, big firms such as Goldman Sachs and Merrill Lynch were coming up with tantalizing new ways to make money, and by 1994 Deutsche Bank wanted a piece of the action.

It started by recruiting Edson Mitchell, an American executive from Merrill, who believed Deutsche Bank's "stubborn Germanness was the main impediment to unleashing its full animal spirits." Mitchell set about building a global markets operation, not at the bank's Frankfurt headquarters but in London, where he could function more independently. He hired a staff of "bloodthirsty piranhas" from Wall Street who knew how to push boundaries, as Enrich's tale tells.

Among them was Bill Broeksmit, a risk management genius who subsequently killed himself as regulators were moving in on the bank and whose death is the mystery Enrich uses to frame the story.

Mitchell died early in a plane crash, but the machinery he built kept chugging along. Enrich tells the story of its rise and fall in the careful style of a good newspaper reporter (he is an editor at The New York Times) but allows the complicated material to unfold like a good novel.

Over time, he writes, Deutsche Bank became less German and more global, so much so that the bank had to post a sign in its London lobby explaining how to say "Deutsche." Too many of the American traders were pronouncing it "douche bank."

With the piranhas in charge, Deutsche Bank eventually became the biggest bank in the world, with 90,000 employees and some $2 trillion in assets — almost the size of the German economy, Enrich notes. Despite that, it was a clumsily managed place. The bank's antiquated computer system made it difficult for senior management to monitor London's activities, even if they'd wanted to — and it's not clear they did. Management tended to look the other way when employees broke the rules, even when they did business with dictators like Russian President Vladimir Putin and their friends. "Even by the amoral standards of Wall Street, Deutsche exhibited a jarring lack of interest in its clients' reputations," Enrich writes.

Just how disconnected the bank became can be seen in its ongoing relationship with a then New York real estate developer named Donald Trump, whose multiple bankruptcies had made him a pariah in the banking world. One part of Deutsche Bank turned down Trump's request for a loan. But the private banking division, which catered to the rich and famous, arranged the loan anyway — and then, when Trump stopped making payments, arranged another one.

Trump's murky relationship with Deutsche Bank is still under congressional investigation, so Enrich's story is necessarily incomplete. Still, the book has enough detail to make its case that Deutsche Bank was more than just one more rogue bank; it is a cautionary tale of what happens when a bank pursues profits at any cost, without being weighed down by pesky moral scruples.