Accessibility links
Bach Helps An Art Critic Mourn A Mother Whose Criticism Lingers In 'Counterpoint' The Washington Post's Philip Kennicott suffered his mother's harsh words and actions throughout childhood. His book is partly a need to acknowledge her "sadness and anger and unaccountable rages." 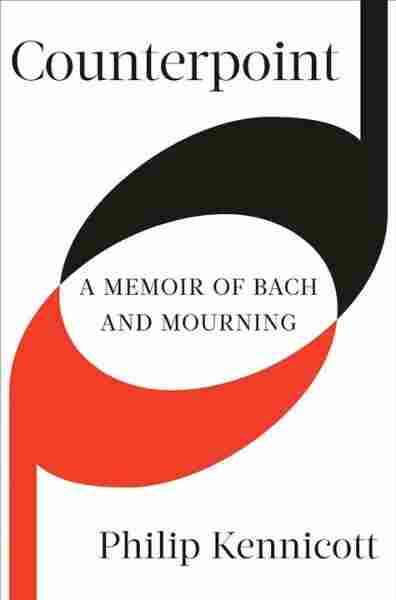 A Memoir of Bach and Mourning

How can one mourn a parent whose harsh judgments frame childhood? This question haunts Philip Kennicott's Counterpoint: A Memoir of Bach and Mourning.

Kennicott is the Washington Post's senior art and architecture critic. His book poses a second, equally challenging set of questions. "What does it mean to truly know a piece of music?" How to write about it? How to learn to play an instrument in a way that satisfies, while not embarking on a professional career? And finally: How to understand Johann Sebastian Bach's Goldberg Variations, a totemic work in the Western canon?

Counterpoint opens at the bedside of Kennicott's dying mother. During those final days he listens to Bach, the only music that didn't seem "trivial, insipid, or irrelevant to life."

Six months later, the family puts together a memorial service, an effort to embalm an image of a pretty woman married to her first love — a young naval officer — mother to four, who lived a free and prosperous life. In reality, Kennicott's mother was an angry victim of the 1950s; a woman who did not want children and who deeply resented housekeeping even as she became a cleanliness fanatic.

Throughout his childhood, Kennicott suffered his mother's mercurial and barbed criticism, as if it were her intent to burden him with her own bitterness. In part, Counterpoint is Kennicott's primal need to acknowledge her "sadness and anger and unaccountable rages."

His mother interrupts him as he's curled up reading. She purposefully distracts him with manufactured activities. He shovels the driveway and sidewalks as a 14-year-old without being asked. Instead of thanks, his mother rages because he failed to leave his boots by the back door. Humiliated, he bends down to move them. She strikes him with such force that he staggers forward, crying hot tears of shame.

Kennicott comes to understand these types of incidents as Walter Benjamin's "immolation of our deepest self." He decides to "cancel the rest of his youth and devote myself only to things that mattered." The problem is, much of what matters are things he shares with his mother, such as music.

As he journeys through his grief, Kennicott braids his fraught relationship with his mother together with his fraught relationship to music. His musical story operates on several levels. First, his education. He takes piano lessons, moving through a series of teachers as he becomes more serious. Kennicott's descriptions will resonate with any aspiring musician (what piano student doesn't remember slogging through Hanon exercises?). He studies with teachers who are too tough, too easy, too rigid, too narrow. Lucky for him, he finally lands on Joe Fennimore, a teacher whose insights and wisdom make it all worthwhile.

Throughout, his mother stings him at unpredictable moments, ruing her failure to continue the violin playing of her youth. If she fails to ruin music for Kennicott, it is because his instrument differs from hers. His older violin-playing sisters "came into violent conflict with my mother, who would threaten and belittle and rage at them, until the whole house was shaken by slamming doors and everyone had fled as far as they could from the wrath and tears of the others."

Kennicott provides insight into many classical pieces and artists but focuses on Bach. He examines Bach the man: the father struggling to feed and clothe endless children and train them in the family music business; the husband suffering the loss of his beloved first wife; and the iterant musician about whom few historical facts are known.

To reconcile himself to his mother's memory, Kennicott pledges to learn the Goldberg Variations. Keyboard artists have long wrestled with this piece. Glenn Gould shook up the classical music world with his iconic 1955 piano recording. Two generations later, pianist Simone Dinnerstein entered with a splash (with mixed results, in this writer's view). Ralph Kirkpatrick left behind the definitive harpsichord interpretation.

On a deeper level, Kennicott plumbs Bach the composer, architect of the Goldberg Variations' brilliant symmetry, grounded in fractals and written with mathematical precision. Over the course of the book, Kennicott meticulously deconstructs the variations, but cannot answer the central mystery — why this piece moves us — because no one can. What can be said is that players and listeners alike experience this piece not as a set of cold calculations, but as soul-wrenching art.

Like all serious thinkers, Kennicott raises more questions than he can answer, both about music and about his family. His mother makes vicious remarks about homosexuality, while she must know her son is gay. They don't discuss it, just as they don't discuss anything of importance, for Kennicott sees "that she would tear me apart if I didn't root her out of my life."

Given the wounds his mother inflicted, Kennicott's account is gracious, even loving. He takes pains to empathize with her, putting her furies in a context personal to her. His musical journey provides balance and balm and depth, in concert with struggle.

Counterpoint is a thought-provoking and accomplished memoir, meeting Kennicott's own criterion that "every good book or great piece of music carries with it the possibility of redemption."

Martha Anne Toll's writing is at www.marthaannetoll.com, and she tweets at @marthaannetoll. She is the executive director of the Butler Family Fund.