Accessibility links
How The Nevada Caucuses Will Work To Avoid Iowa Errors Reporters were given a preview of a mock caucus with the actual worksheet and posters that will be in use and the iPad calculator that will help with the caucus math. 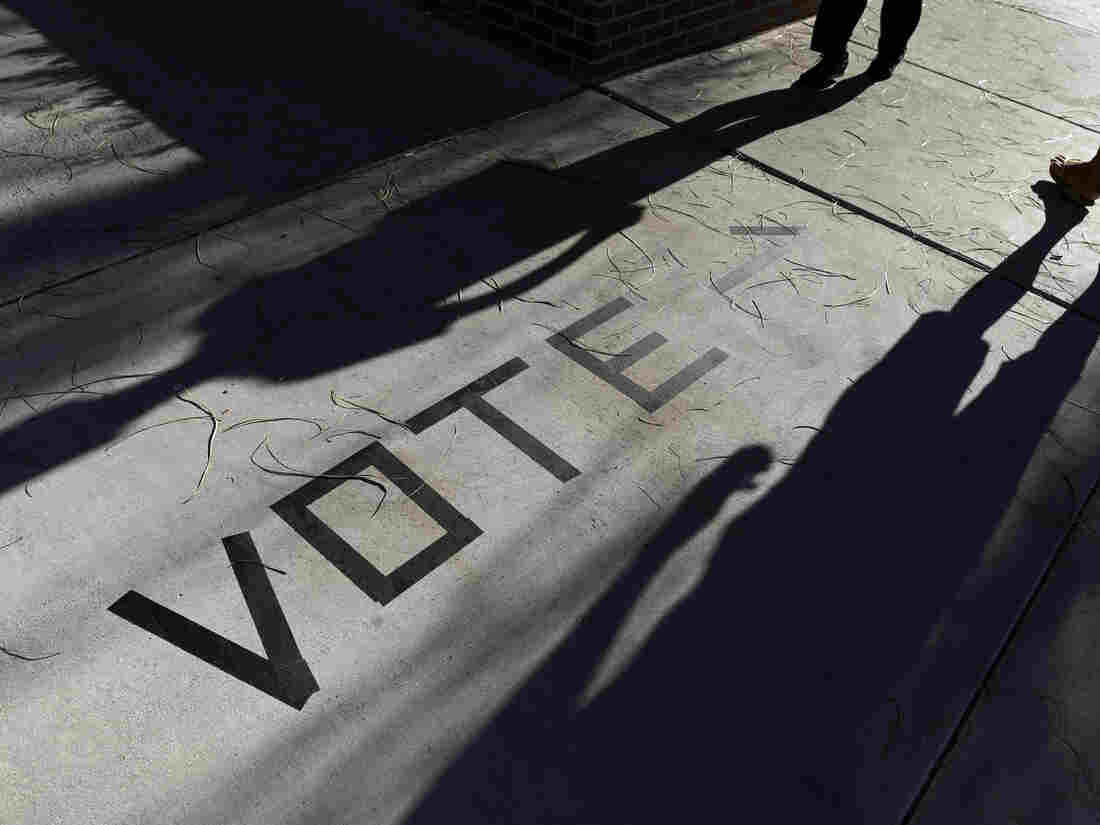 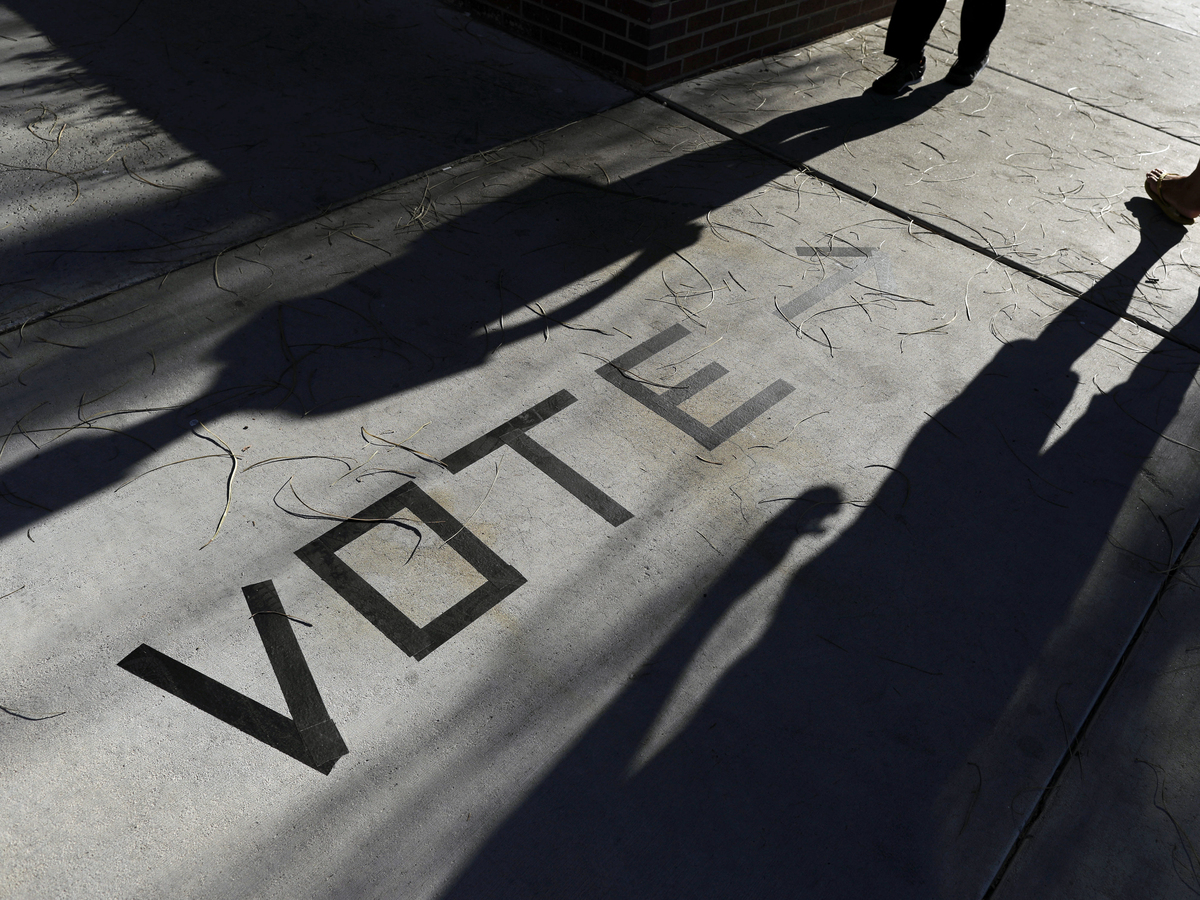 Nevada Democrats, hoping to avoid a repeat of the fiasco of the Iowa caucuses, hosted an hourlong briefing with reporters Tuesday night in which they walked through a mock caucus.

Reporters got a look at the actual caucus-day worksheet and posters that will be in use, and the much-fretted-about iPad calculator that will help with the caucus math and that, party leaders hope, will speed up the integration of early voting numbers in the state, which holds its caucuses Saturday.

After Iowa Debacle, Nevada Democrats Will Not Use An App For Their Caucuses

Earlier this month, Iowa Democrats held their first-in-the-nation contest in a process that was tarnished by not only a coding error within the smartphone app used to conduct the caucuses, but also by a backup plan that was poorly communicated and executed. More than two weeks after the caucuses, results remain mired in controversy and recounts.

In Nevada, party leaders are acutely aware of the failures of Iowa and are keen not to repeat those mistakes in Saturday's caucuses. The state party is not using an app to conduct its caucuses. Instead, Democrats are using a customized set of Google forms that will be accessed through the iPads' Safari browser.

The party is distributing the technology to precinct leaders over the next couple days, though the site leaders won't have access to the early voting data until Saturday; early voting began in the state last Saturday and ran until Tuesday.

Still, concerns remain about the nature of the technology being used in Nevada. Although the iPads being used are all 4G, and hence not dependent on WiFi, there will likely be some connectivity issues, considering there are about 2,000 precincts across the state. 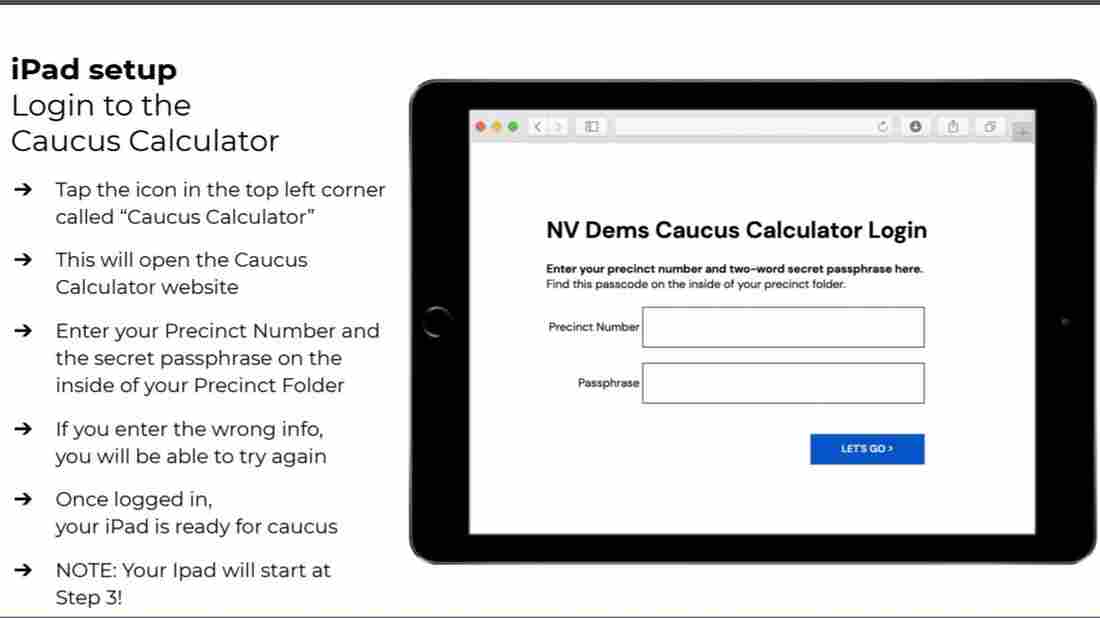 A training slide for caucus-day volunteers shows the login screen for the iPad calculator that Nevada Democrats are integrating into their caucuses this year. Courtesy of Nevada Democrats hide caption 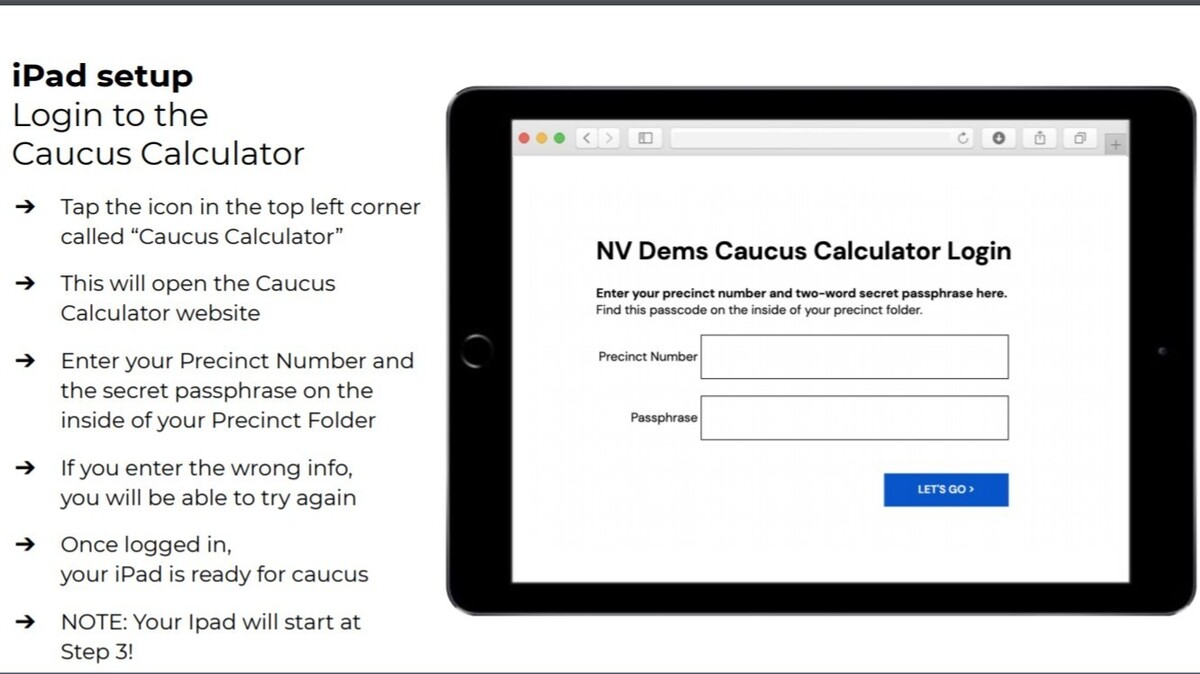 A training slide for caucus-day volunteers shows the login screen for the iPad calculator that Nevada Democrats are integrating into their caucuses this year.

The iPads mimic the paper step-by-step guides that precinct leaders have. So as they move through the caucus process, they click along in the iPad and are taken to a new browser page with each step.

This training slide shows the page that first integrates the early voting data into a caucus leaders' process. Courtesy of the Nevada Democratic Party hide caption

The precinct chairs must then fill in individual fields showing the support in the room for each candidate.

Once those fields are complete in the iPad, a precinct chair is taken to a table that integrates data from early voting with the data entered at their precinct and tells them which candidates are viable.

A large version of the reporting worksheet should be displayed in the precinct room, with the precinct secretary writing along, so attendees and observers, as well as caucus leaders, will be doing the math separate from the calculator to ensure the numbers the iPad spits out are correct.

Nevada Democrats say all precinct chairs in the state will have the option to not use the calculator on the iPad if they choose or if the technology isn't working for whatever reason.

The party will provide each chair with their applicable early voting data on paper, which the chair will have to manually enter into their worksheet and use to calculate a candidate's viability.

The biggest difference between the calculator version of this exercise and the paper version is that if they use the paper, the chairs will have to manually count the supporters of each candidate from a list of ballot selections they are given. When they are using the iPad, that information is already autopopulated and counted.

This wrinkle could prolong the process in these precincts, though in many precincts there may only be a few dozen or so early votes that need to be counted.

After all the math is complete, and delegates are awarded, precinct chairs are required to call in their results to the state party. The party says it will provide more details on the reporting process in the coming days.