Accessibility links
Disparities In Government Contracting Hurt Minority-Owned Businesses Despite affirmative action goals meant to make up for disparities, white-owned businesses win most of the bids for government work. And in many places the numbers are getting worse. 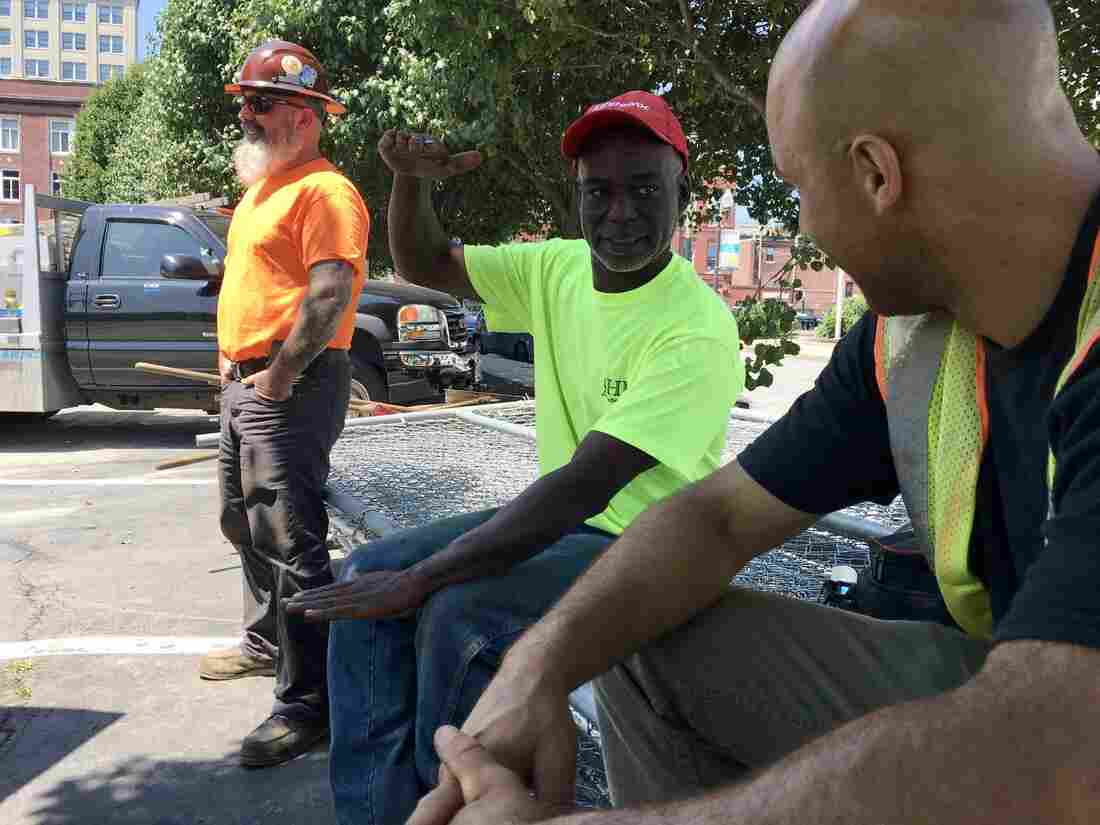 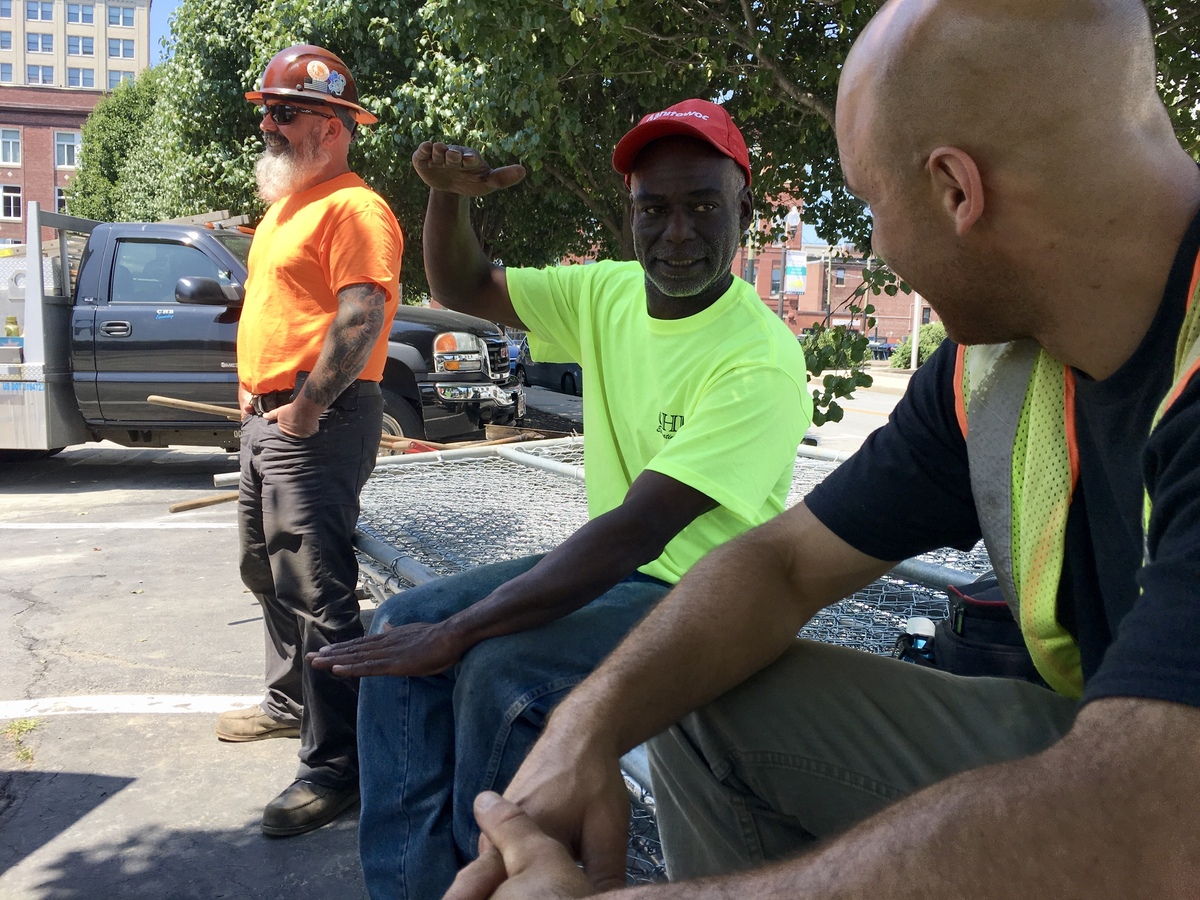 Calvin Brandford (center) is a certified minority contractor who has run an excavation business north of Boston for almost 30 years. Brandford said getting state-funded work as a subcontractor is very hard and often comes with a serious drawback: not getting paid for 60 to 90 days.

State and local governments spend billions of dollars hiring contractors for goods and services, but most of those contracts go to white-owned businesses, not minority contractors — despite decades of affirmative action and other policies meant to make up for disparities.

A federal study released by the Minority Business Development Agency in early 2017 found the needle has barely moved on boosting minority business participation in public contracts.

When Bias Is Coded Into Our Technology

Albert Shen, the former deputy chief of minority business development under President Obama, believes one reason is that government procurement officials just hire who they know.

"The people that manage these large projects are — to be blunt — very homogeneous. They don't have diverse networks, so they don't know who to reach out to," Shen said. "[But] because they don't know doesn't mean they don't exist."

There are more than 11 million minority owned businesses in the U.S. In places such as Massachusetts, minority entrepreneurs are now getting a smaller slice of the pie when it comes to doing business with local government. Over the last two decades, adjusted for inflation, the value of Massachusetts contracts going to minority-owned businesses has fallen 24%. That's $135 million less per year paid to minority entrepreneurs.

"The smart thing to do"

In Massachusetts and many other states, public projects are required to hire a certain percentage of minority and women-owned businesses.

But Larry Cole, who runs a trucking company in Springfield, Mass., said there's very little oversight to make sure that happens. In 2007, a construction company promised him hundreds of hours of work as a minority subcontractor but Cole got only a fraction of the work – despite sometimes showing up onsite with trucks and drivers.

"You've got to feed a family. At that time, I had three kids in college, plus the trucks, the insurance, payroll taxes," said Cole, remembering how he challenged the construction company when they turned him and his dump trucks away. "I said, 'Wait, I'm supposed to be doing all the trucking here.' Well, next thing you know, you're not doing it." 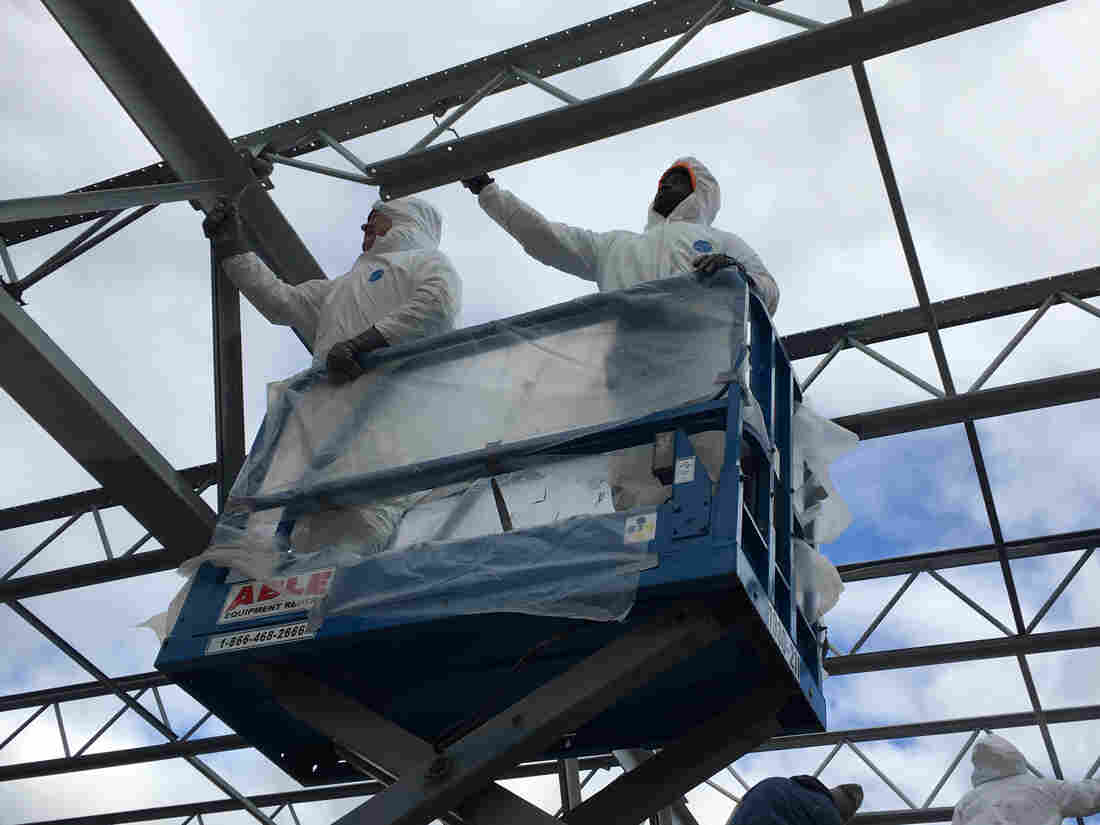 Lionel Henry (right), who works for a minority-owned contracting firm, repairs the roof of an outdoor hockey rink at Philadelphia's Fishtown Recreation Center in December 2019. The project was part of a Philadelphia effort to expand participation of minority contractors in city-funded construction jobs. Christopher Burrell/WGBH hide caption 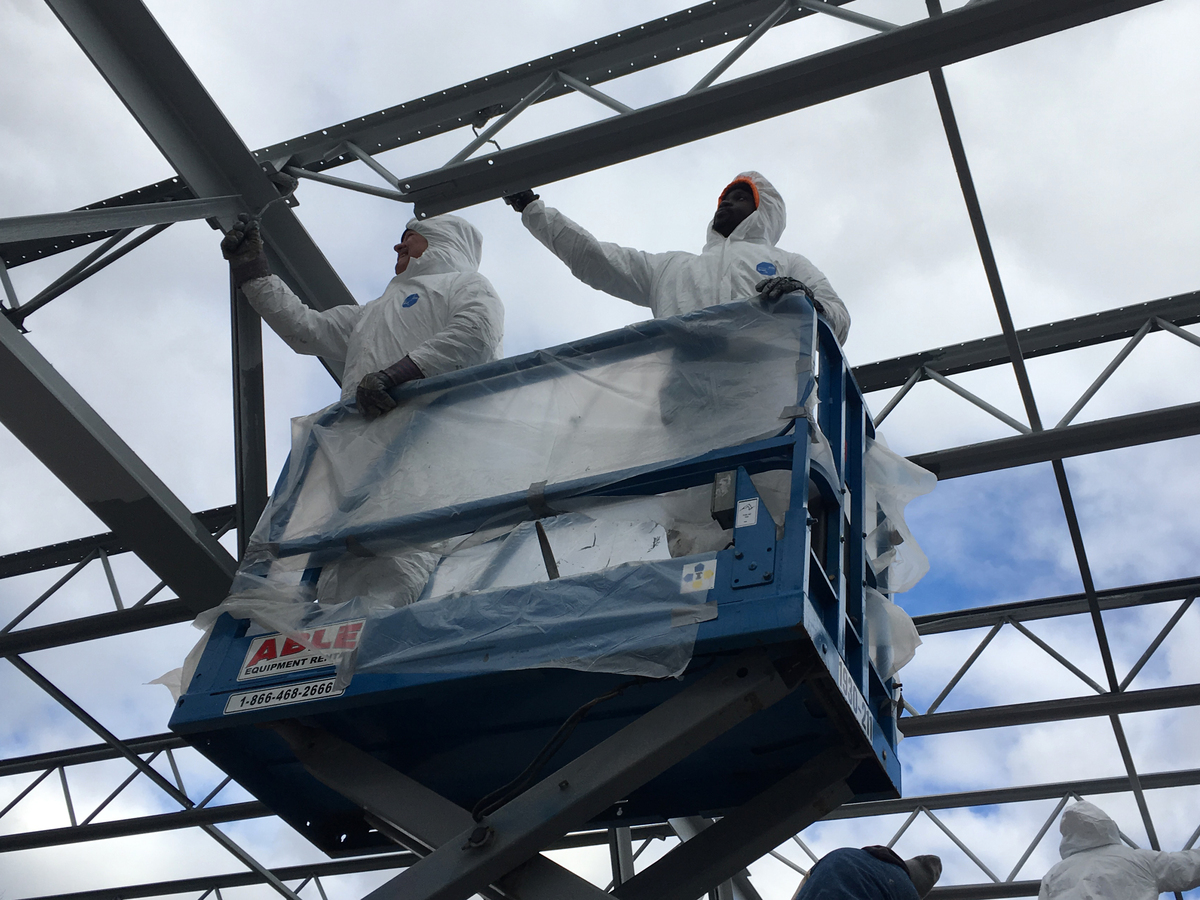 Lionel Henry (right), who works for a minority-owned contracting firm, repairs the roof of an outdoor hockey rink at Philadelphia's Fishtown Recreation Center in December 2019. The project was part of a Philadelphia effort to expand participation of minority contractors in city-funded construction jobs.

Cole's trucking company shrank, he said, partly because of his frustration of getting work in the public sector.

"The one thing the Mass Gaming Commission did was to be intentional to diversify their workforce — setting these goals, holding everyone accountable, measuring progress," she said.

James Jennings, an expert on race and politics and an emeritus professor at Tufts University, said the state's efforts to increase fairness and equity for minority business owners aren't cutting it.

"The pushing has been going on for 25 to 30 years now," Jennings said. "I think leadership has to be more aggressive in saying we're going to do something about this because it's the right thing to do (and) it's also economically the smart thing to do."

Critics in Massachusetts have pointed to Philadelphia as a model for local government getting more aggressive about hiring minority contractors.

On a raw December afternoon in North Philadelphia, a dozen kids are chasing a soccer ball on a blacktop basketball court on a city-owned playground slated for renovation. It's part of a $400 million initiative aimed at fixing up recreation centers, parks and libraries in low-income neighborhoods like this one.

The city of Philadelphia also intends to spend a third of that money hiring businesses owned by minorities to do the work.

"These poor communities that are mostly minority in the city of Philadelphia: It makes a lot of sense that if you have people coming in and working and fixing things and designing things, let them look like [local people]," said Cappy Sabir, an engineer and minority business owner whose company is working a new vision for this playground. "You're giving a level of motivation and pride to the community. 'See? I can be an architect. I can be an engineer, I can be a contractor.'"

Sabir is a co-owner of SRW Engineering & Architecture, which won five contracts with the city worth almost half a million dollars. City-wide, minority-owned businesses landed 23% of Philadelphia city contracts last year, totaling $166 million.

"You really have to have buy-in from the top," Harper said. "The boss of the city, not their boss, but their boss's boss, expects that there's going to be some inclusion. They know that part of my evaluation or part of what my boss is looking at is my ability to be inclusive and be equitable."

Underlying this mandate is simple economics, said Harper, especially in a city with a poverty rate at 26% — one of the country's highest for a big city.

"Businesses that are owned by people of color hire people who look like them," she said. "That's people that are going to be employed and that's going to impact the poverty rate."

The city has also lowered barriers that have historically favored big contractors by offering assistance to smaller, minority-owned and women-owned firms before they even bid on projects.

Sabir's company — with just 20 employees — took advantage of the city's new rules and is now treated as a prime contractor, not just a subcontractor that has to lobby other private businesses for a share of the work.

"Opportunities come out from the city (were) worded in a way, structured in a way that is impossible for either for any minority, or woman-owned business to even have a chance," Sabir said. "Offering the opportunity for minority firms to be primes? To us, that's like Obama becoming president. It's huge."

President Trump's budget for next year calls for cutting the Minority Business Development Agency budget by 76%.