Accessibility links
Precious Ethiopian Crown Returned — After 21 Years Stashed In A Dutch Apartment Officials say the 18th century artifact disappeared in 1993. Then it turned up at Sirak Asfaw's place in the Netherlands in 1998. Not knowing what to do, he stayed quiet about it ... for two decades. 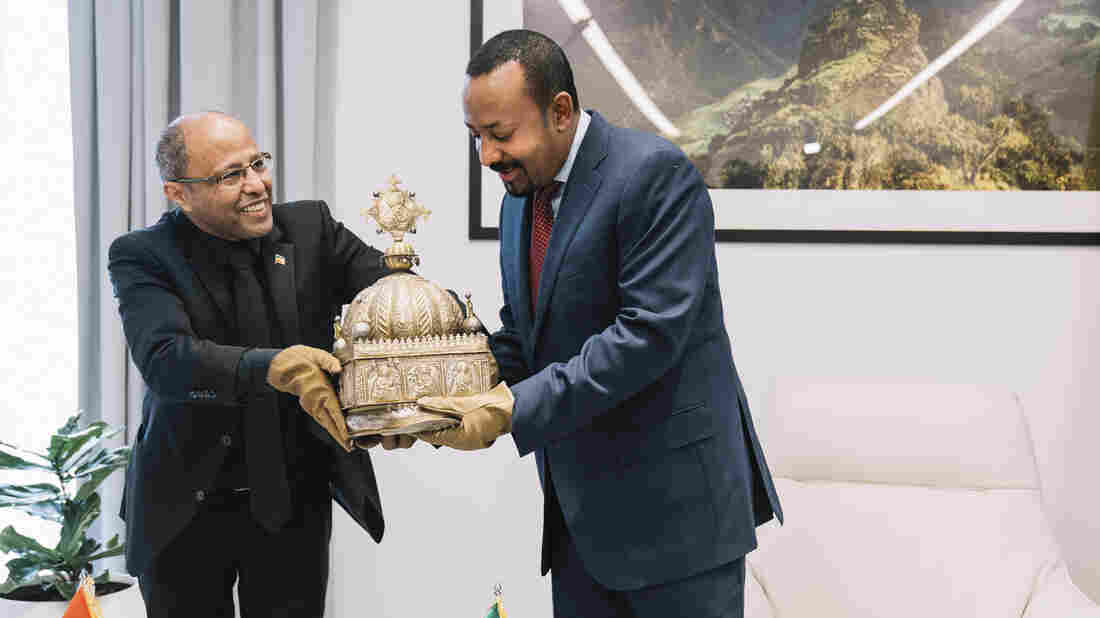 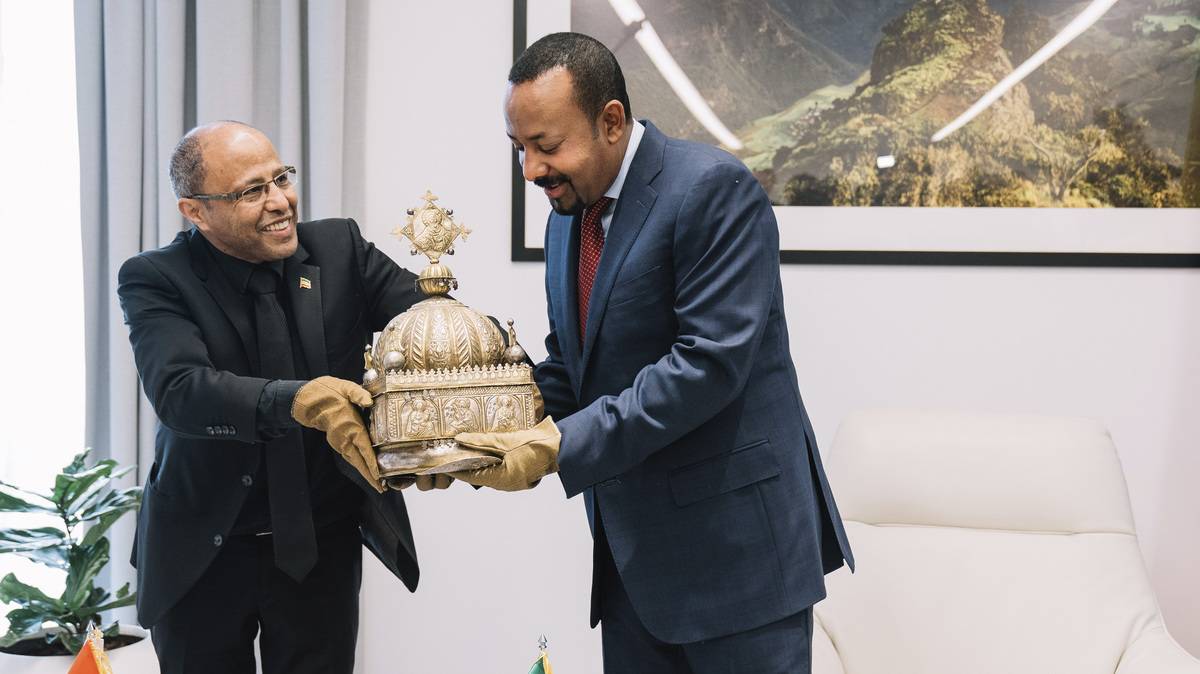 Ethiopian Prime Minister Abiy Ahmed (right) receives the crown from the man who found it, Sirak Asfaw, during a ceremony Thursday in Addis Ababa. The 18th-century Ethiopian crown had been hidden in a Dutch apartment for the past 21 years.

The Office of Prime Minister Abiy Ahmed via AP

More than two decades after it went missing, a ceremonial crown dating back to the 18th century has found its way home to Ethiopia. The country's prime minister, Abiy Ahmed, received the glistening artifact at a ceremony Thursday in Addis Ababa, in a triumphant end to a twisty saga that transcends national borders.

Abiy expressed his gratitude to the Dutch officials who facilitated its return — and to the man who found it, Sirak Asfaw, who was there for the handoff.

Sirak, a political refugee who fled to the Netherlands in the 1970s, played a big role in the curious journey of the ornate bronze crown, which Ethiopian authorities say had been missing since 1993.

Sirak told The New York Times last year that it turned up in a suitcase that a guest had brought to his house, back in 1998. He says he opened the bag and found the crown after its gleam caught his eye — and though he remains unwilling to name the guest publicly, he says he confronted the visitor and held onto the crown.

What to do next though, Sirak says, was not exactly obvious.

PM @AbiyAhmedAli met this morning with Dutch Minister for Foreign Trade & Dev’t Cooperation, Ms. Sigrid Kaag who came to Ethiopia to handover a ceremonial 18th century crown. The crown had been missing since 1993 and we rediscovered in Rotterdam, Netherlands in October 2019. 1/2 pic.twitter.com/gGUUfC9ybc

"What would you do if you found an incredibly valuable historical Ethiopean [sic] artefact ... abroad?" he asked on an online discussion platform for Ethiopians not long after finding it, according to a video released last year.

It's not clear how his query was answered, but Sirak is clear about what happened next: He just held onto it at his home for safekeeping — for more than two decades.

He says he didn't trust the authorities in power in Ethiopia at the time. "To hand over such priceless cultural heritage onto strange hands, or officials of that regime, is very hard to do," he said in the video, referring to the authoritarian regime that governed Ethiopia until recently.

"Furthermore," Sirak said, "should the artifact fall into other foreign hands and wise, Ethiopian-minded leaders would claim it back, the oft-heard answer could be: 'You may borrow it from us.' "

That comment was a pointed reference to a recent dispute between Ethiopian officials and the Victoria and Albert Museum in London, which owns precious artifacts seized after the British military defeated Ethiopian Emperor Tewodros II in the 19th century. The museum has offered to loan the artifacts back to Ethiopia — an offer that Ethiopian officials have rejected as insufficient.

A priest wearing the crown in Cheleqot, #Ethiopia, in 1993, before it was stolen.

"You end up in such a suffocating situation, not knowing who to tell or what to do, or to hand over," he explained to the BBC.

It was not until the reform-minded — and newly minted Nobel Peace Prize laureate — Abiy took office in 2018 that Sirak finally decided to come forward.

He contacted Arthur Brand, a renowned Dutch specialist in the recovery of stolen art whose work often draws comparisons to Indiana Jones. And Brand, who has described the crown as "one of the most exciting finds of my career," then encouraged Sirak to hand it over to local authorities.

So the pair reached out to the Dutch Ministry of Foreign Affairs, and the ministry hammered out the details of how to return the artifact to Ethiopia — where it hadn't been seen since it went missing from the Ethiopian Orthodox Holy Trinity Church in the village of Cheleqot in the early 1990s.

Now, after 21 years hidden in a Dutch apartment, the crown is back in Ethiopia.

"We're honoured and delighted to have been able to facilitate the rightful return," said Sigrid Kaag, the Dutch minister for foreign trade and development cooperation. "This is the crowning achievement of returning this heritage to its rightful place."