Accessibility links
4-Day Workweek's Appeal Goes Global As Bosses Seek To Boost Profits And Morale The notion of a shorter workweek might sound crazy to overworked Americans, but around the world, companies and even governments are starting to embrace it. The key is fewer meetings and distractions. 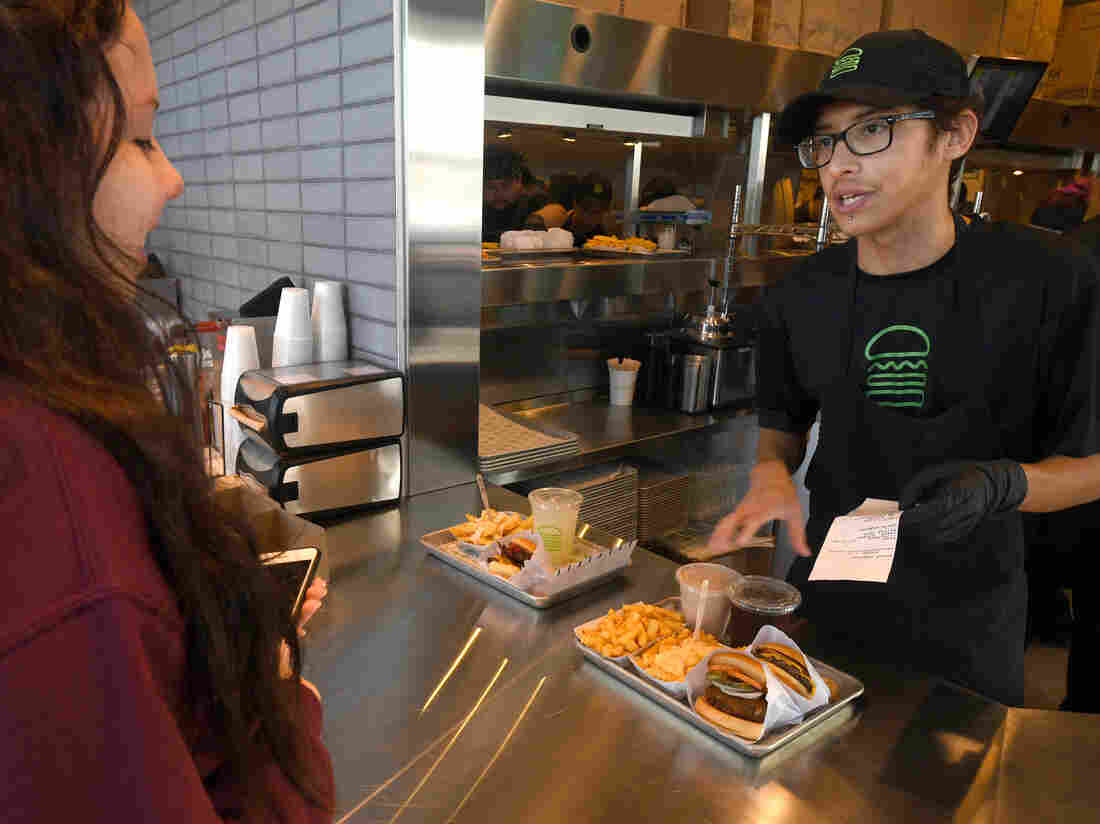 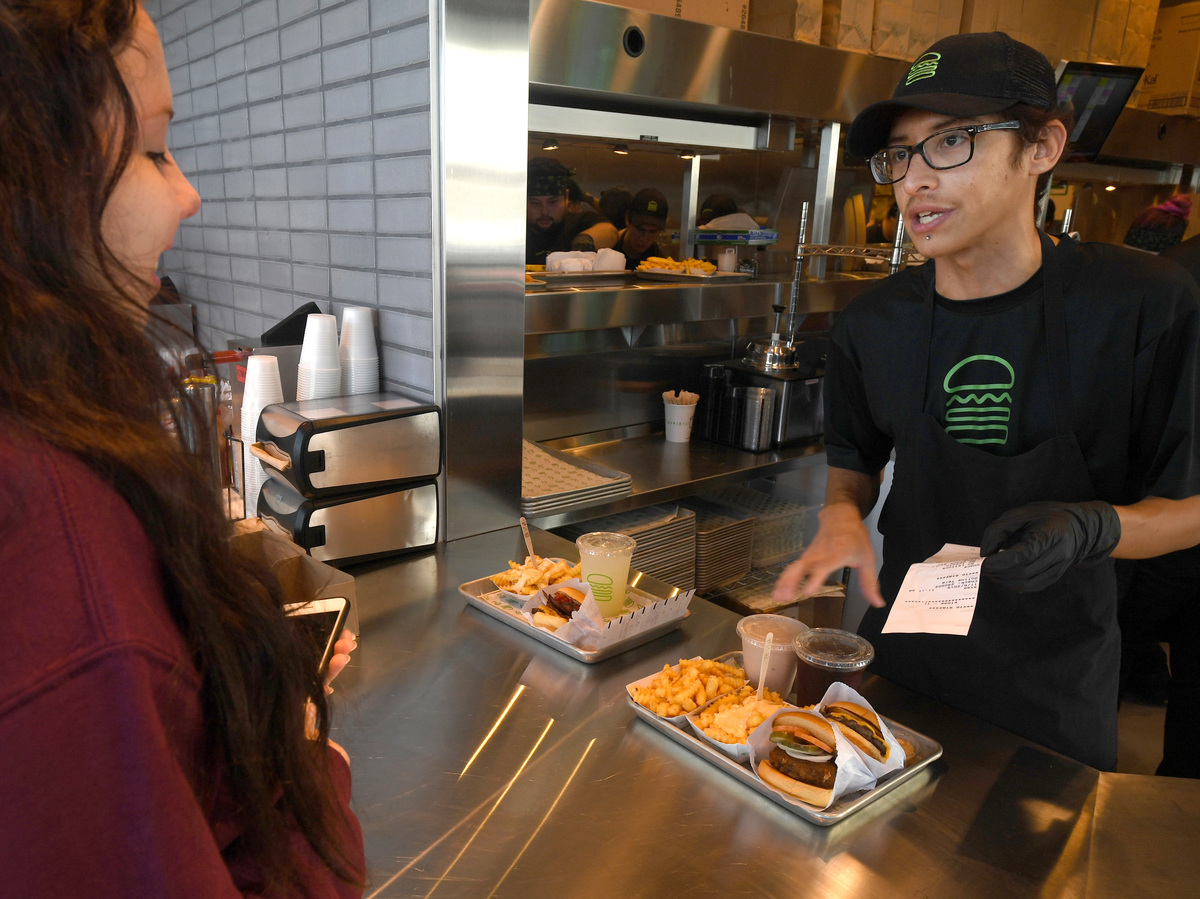 Shake Shack shortened managers' workweeks to four days at some stores a year and a half ago. Recently, the burger chain expanded the trial to a third of its U.S. stores.

The concept is gaining ground in places as varied as New Zealand and Russia, and it's making inroads among some American companies. Employers are seeing surprising benefits, including higher sales and profits.

The idea of a four-day workweek might sound crazy, especially in America, where the number of hours worked has been climbing and where cellphones and email remind us of our jobs 24/7.

But in some places, the four-day concept is taking off like a viral meme. Many employers aren't just moving to 10-hour shifts, four days a week, as companies like Shake Shack are doing; they're going to a 32-hour week — without cutting pay. In exchange, employers are asking their workers to get their jobs done in a compressed amount of time.

Last month, a Washington state senator introduced a bill to reduce the standard workweek to 32 hours. Russian Prime Minister Dmitry Medvedev is backing a parliamentary proposal to shift to a four-day week. Politicians in Britain and Finland are considering something similar.

In the U.S., Shake Shack started testing the idea a year and a half ago. The burger chain shortened managers' workweeks to four days at some stores and found that recruitment spiked, especially among women.

Shake Shack's president, Tara Comonte, says the staff loved the perk: "Being able to take their kids to school a day a week, or one day less of having to pay for day care, for example."

So the company recently expanded its trial to a third of its 164 U.S. stores. Offering that benefit required Shake Shack to find time savings elsewhere, so it switched to computer software to track supplies of ground beef, for example.

"It was a way to increase flexibility," Comonte says of the shorter week. "Corporate environments have had flexible work policies for a while now. That's not so easy to do in the restaurant business."

Hundreds — if not thousands — of other companies are also adopting or testing the four-day week. Last summer, Microsoft's trial in Japan led to a 40% improvement in productivity, measured as sales per employee.

Much of this is thanks to Andrew Barnes, an archaeologist by training, who never intended to become a global evangelist. "This was not a journey I expected to be on," he says.

Barnes is CEO of Perpetual Guardian, New Zealand's largest estate planning company. He spent much of his career believing long hours were better for business. But he was also disturbed by the toll it took on employees and their families, particularly when it came to mental health.

So two years ago, he used Perpetual Guardian and its 240 workers as guinea pigs, partnering with academic researchers in Auckland to monitor and track the effects of working only four days a week.

"Core to this is that people are not productive for every hour, every minute of the day that they're in the office," Barnes says, which means there was lots of distraction and wasted time that could be cut.

Simply slashing the number and duration of meetings saved huge amounts of time. Also, he did away with open-floor office plans and saw workers spending far less time on social media. All this, he says, made it easier to focus more deeply on the work.

Barnes says there were other, unexpected benefits: It narrowed workplace gender gaps. Women — who typically took more time off for caregiving — suddenly had greater flexibility built into their schedule. Men also had more time to help with their families, Barnes says.

The company didn't police how workers spent their time. But if performance slipped, the firm could revert back to the full-week schedule. Barnes says that alone motivated workers.

Employers — including big multinationals — started calling, seeking advice. "Frankly, I couldn't drink enough coffee to deal with the number of companies that approached us," Barnes says.

Demand was so great that he set up a foundation to promote the four-day workweek. Ironically, in the process, he's working a lot of overtime.

"You only get one chance to change the world. And, it's my responsibility at least, on this one, to see if I can influence the world for the better," he says.

To date, most of that interest has not come from American employers.

Peter Cappelli, a professor of management at the Wharton School of the University of Pennsylvania, says that's because the concept runs counter to American notions of work and capitalism. Unions are less powerful, and workers have less political sway than in other countries, he says.

So American companies answer to shareholders, who tend to prioritize profit over worker benefits.

"I just don't see contemporary U.S. employers saying, 'You know what, if we create more value here, we're gonna give it to the employees.' I just don't see that happening," Cappelli says.

Natalie Nagele, co-founder and CEO of Wildbit, has heard from other leaders who say it didn't work for them. She says it fails when employees aren't motivated and where managers don't trust employees.

But Nagele says moving her Philadelphia software company to a four-day week three years ago has been a success.

"We had shipped more features than we had in recent years, we felt more productive, the quality of our work increased. So then we just kept going with it," Nagele says. Personally, she says, it gives her time to rest her brain, which helps solve complex problems: "You can ask my team, there's multiple times where somebody is like, 'On Sunday morning, I woke up and ... I figured it out.' "

Mikeal Parlow started working a four-day week about a month ago. It was a perk of his new job as a budget analyst in Westminster, Colo.

He works 10 hours a day, Monday through Thursday. Or, as he puts it, until the job is done. Parlow says he much prefers the new way "because it is about getting your work done, more so than feeding the clock."

That frees Fridays up for life's many delightful chores — like visits to the DMV. "For instance, today we're going to go and get our license plates," Parlow says.