Accessibility links
'Hunters' Is So Flashy, Pacino Pales In Comparison Al Pacino is the marquee attraction in Hunters, Amazon's new show about Nazi hunters in the 1970s — but the story is splashy and electric enough that he's not the most interesting thing in it. Yes, Al Pacino (seen here with Logan Lerman) is in Hunters, Amazon's new show about a band of Nazi hunters in the 1970s, but he's not the most interesting thing about it. Christopher Saunders/Amazon Studios, Prime Video hide caption 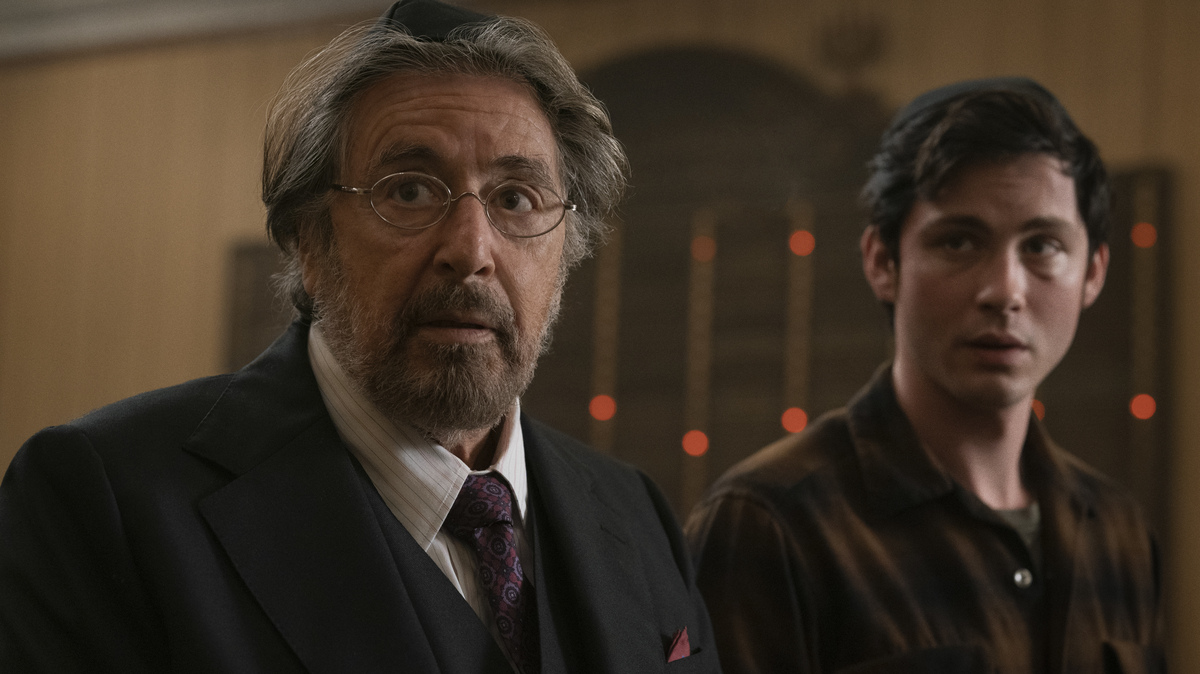 Yes, Al Pacino (seen here with Logan Lerman) is in Hunters, Amazon's new show about a band of Nazi hunters in the 1970s, but he's not the most interesting thing about it.

Can you make a habit of killing really evil people — say, unrepentant Nazis hiding in America — and still hold onto your soul?

That's one of the biggest questions at the heart of Amazon Prime Video's electric new series Hunters. It's a splashy story about a scrappy band of investigators tracking down a secret cabal of Nazis in the 1970s that occasionally is a lot more fun than it should be, given the subject at hand.

The show begins with Dylan Baker chewing scenery as Biff Simpson, a crude-talking under secretary of state holding court in a setting that couldn't be more steeped in Americana: a backyard cookout.

But when one of the guests drops her own façade, revealing she's a Jewish woman from overseas who recognizes Biff from his past, Simpson admits he was once a Nazi officer — before silencing her for good.

"I'm so glad I didn't gas you in the camps," he purrs before shooting her. "This is so much more delicious."

It's a flamboyant, surreal scene that epitomizes the tone of Hunters. At times, the action is flashy as a comic book, as producers — including Get Out mastermind Jordan Peele — present a story about Nazi hunting that feels like Batman-meets-the-Dirty-Dozen, as directed by Quentin Tarantino.

Each member of the team is a specialist, from a working actor/disguise artist to a husband and wife team of weapons experts. But they're also pretty damaged people, with demons that spark a lot of the show's humor and in-your-face irreverence.

Stories like this often benefit from introducing a newbie character — as others explain the situation to him, they also explain it to the audience. In Hunters, that character is Logan Lerman's Jonah Heidelbaum, a comic book store clerk who likes to debate naïve ideas about heroism and villainy and Star Wars bad guy Darth Vader.

"Vader doesn't get up every day looking to destroy the galaxy," Jonah tells his pals. "He gets up every morning believing he needs to save it ... The only difference between a hero and villain is who sells more costumes at Halloween." 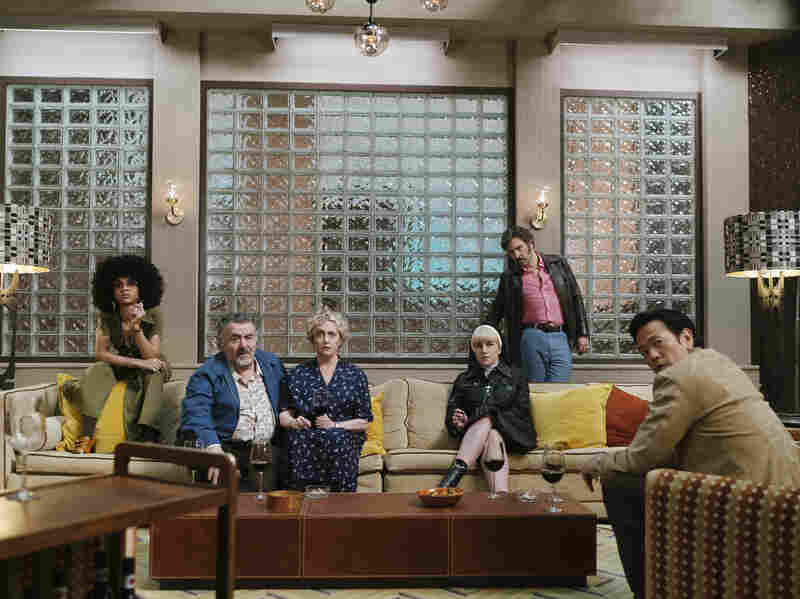 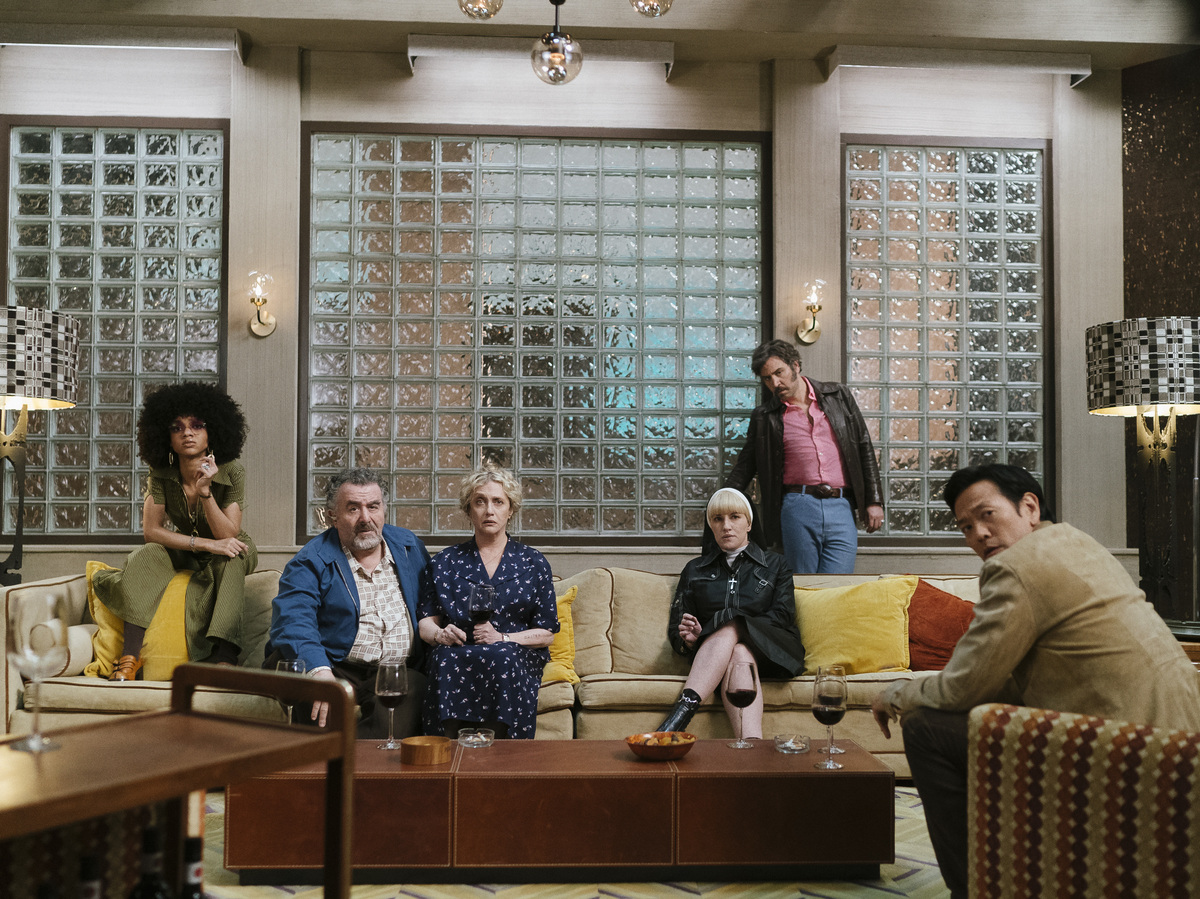 Hunters' motley crew includes a husband and wife team of weapons experts and a nun, among others.

But it's not long before Jonah's simple cynicism is turned on its head. His grandmother is killed inside their home, and Jonah meets a man who knew her when they were both imprisoned in a Nazi concentration camp — Al Pacino's wealthy businessman Meyer Offerman.

As Jonah notes, dropping another comic book reference, Meyer has "Bruce Wayne money." He is a wizened Holocaust survivor with a thick Yiddish accent, who has assembled a secret team aimed at unmasking Nazis hiding in America. He had a special connection to Jonah's "savta" — Hebrew for grandmother — including her in the vigilante group.

And he's well past worrying about the morality of exposing and executing Nazis who escaped the fall of the Third Reich.

"We survived the greatest mass eradication in human history," Meyer says to Jonah in a secret room inside his mansion that, indeed, feels a bit Batcave-like. "And we arrive home to find the people who did this to us; they are our neighbors. So tell me: What should we do? Shake hands? Turn a blind eye? ... The greatest single gift of the Jewish people is our capacity to remember."

As you can tell from Meyer's monologue, the messages in Hunters are subtle as a sledgehammer. The secret Nazis crow about how Americans are too busy fighting among themselves to see them coming. And Meyer warns Jonah that history is rarely fully in the past; instead, new people keep repeating it, hoping for a different outcome.

We've seen this type of vengeance story before. But 'Hunters' tone makes it feel unique and entertaining.

At times, it seems the show isn't sure whether it wants to make you laugh at this misfit band of vigilantes or jolt you with horrifyingly visceral flashbacks to the concentration camps (one scene where prisoners are used as human game pieces and executed in a living chess match, is particularly brutal). Viewers can sometimes feel a bit of tonal whiplash, as the story lurches from one extreme to the other.

The show references everything from blaxploitation films to pulpy B-movies with an over-the-top attitude that leaves little room for nuance. Still, over the five episodes I saw, the plot moved a little slowly for my taste, as we learn the Nazis have their own grand plan afoot.

Pacino, in a rare TV series role, is the marquee name here. But Logan Lerman's Jonah is the show's backbone. His struggle over whether to take on the burden of vengeance for his grandmother's murder offers one of the show's few subtler questions, allowing Lerman to shine as performer.

We've seen this type of vengeance story before. But Hunters' tone makes it feel unique and entertaining — speaking to the danger of complacency about the strength of democracy, alongside the hazards of forgetting the Holocaust's bitter lessons.

This story was edited for radio by Ted Robbins and adapted for the Web by Petra Mayer.