Accessibility links
California Gov. Newsom Lays Out Framework To Address Homelessness Gavin Newsom focused his recent State of the State speech on homelessness. He has worked on the issue for 20 years, from San Francisco City Hall to the Capitol in Sacramento. 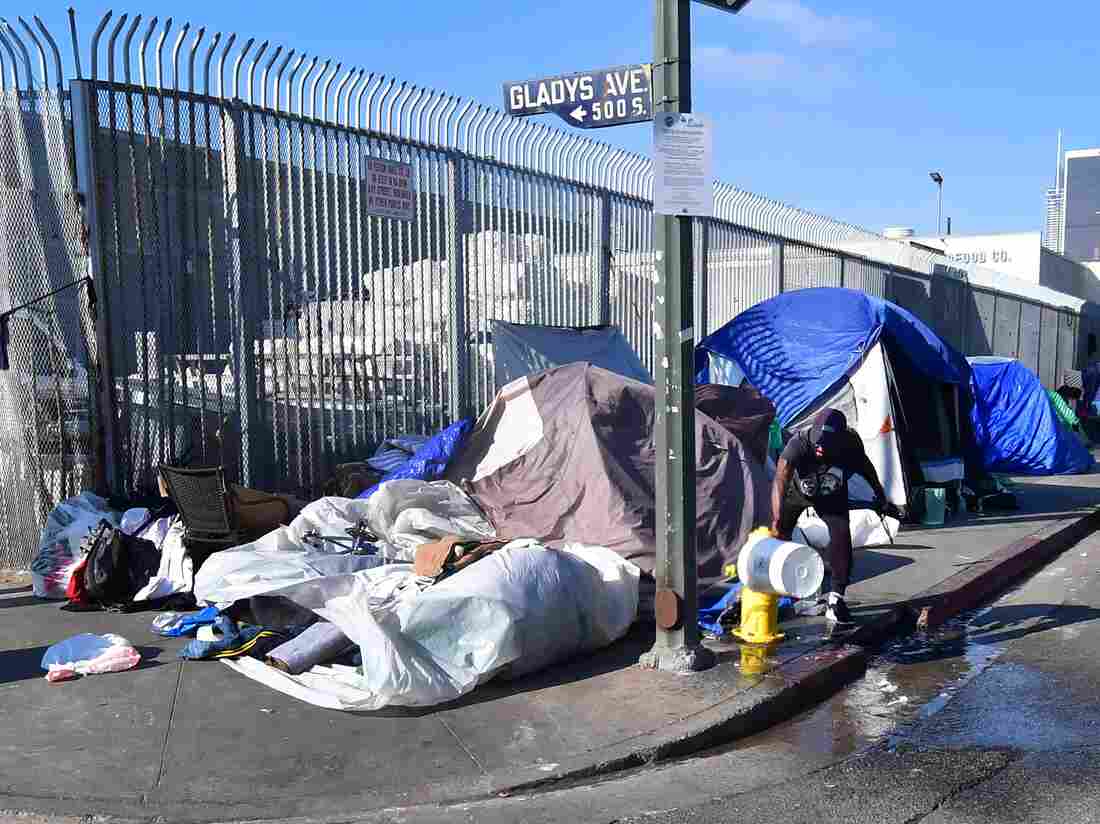 Tents line a street in Los Angeles on Jan. 8. California Gov. Gavin Newsom said his state budget will include more than $1 billion directed toward homelessness in response to a growing crisis on the streets on California's major cities. Frederic J. Brown /AFP via Getty Images hide caption 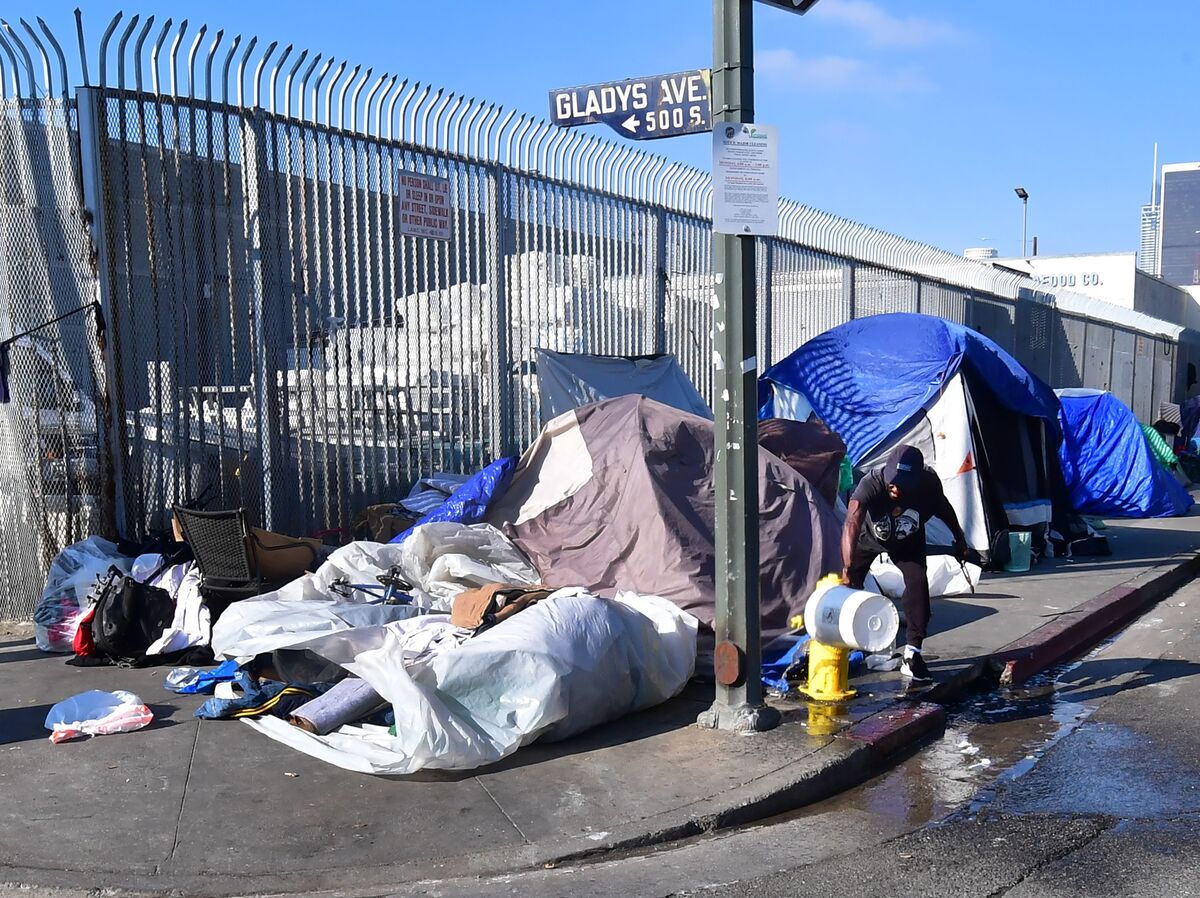 Tents line a street in Los Angeles on Jan. 8. California Gov. Gavin Newsom said his state budget will include more than $1 billion directed toward homelessness in response to a growing crisis on the streets on California's major cities.

Gov. Gavin Newsom made homelessness the focus of his State of the State address Wednesday, reflecting not only Californians' top concern but also nearly 20 years of wrangling on an issue that has followed him from San Francisco City Hall to the Capitol in Sacramento.

"No amount of progress can camouflage the most pernicious crisis in our midst," Newsom said, "the ultimate manifestation of poverty: homelessness."

A recent statewide poll showed homelessness and housing are top of mind for likely California voters ahead of the state's March 3 primary election. About 42% of those surveyed said they see many tents and encampments in the public places and streets where they live.

In his address, Newsom called for new and ongoing revenue sources to pay for homeless services and new housing. He warned that cities and counties would be held accountable to ensure they spend state health care dollars on homeless people with mental illnesses.

Social services advocate Jennifer Friedenbach with the San Francisco Coalition on Homelessness said she's thrilled Newsom is taking the issue seriously but that the state must focus deeply on investment or else these will only be temporary fixes.

"Folks with severe mental health issues that are out on the streets are victims of a system," she said. "They feel that the system is resistant to helping them."

As a San Francisco supervisor in 2002, Newsom drew national attention with his "Care Not Cash" ballot initiative that diverted public assistance from homeless residents to pay landlords for shelter, instead. The program rankled advocates and challenged the city's status as a progressive stronghold. It also helped get him elected mayor.

Seventeen years later, Newsom has again made homelessness one of his top priorities as the number of people experiencing homelessness in California grew to more than 151,000.

While some people who followed Newsom's early career are optimistic about his willingness to attach his name to such a thorny issue — going so far as to say he'll "own homelessness" in California, a state with more than a quarter of the nation's unhoused people — others aren't sure he'll focus on the kind of solutions needed.

When Care Not Cash went to the ballot in 2002, homelessness had reached peak levels. There were 8,640 residents without homes on a given night in San Francisco, according to a biennial survey for the Department of Housing and Urban Development. That's about 8% more than the 8,011 homeless residents counted during the same survey in 2019.

At the start of the decade, dot-com companies were swarming San Francisco's South of Market neighborhood, while elsewhere in the city, rents rose and evictions spiked. The average two-bedroom apartment in 2001 was going for about $3,500 in today's dollars, according to a 2002 report.

A majority of progressive politicians, many without prior political experience, had swept the Board of Supervisors in 2000 — a citizen revolt to the pro-development Mayor Willie Brown, said Richard DeLeon, professor emeritus of political science at San Francisco State University. Newsom was seen then as somewhat of a pariah, DeLeon said, a centrist who had been hand-picked by Brown to fill a midterm vacancy on the board in 1997.

Then the dot-com bubble burst and office spaces in the city's South of Market neighborhood started becoming vacant. Care Not Cash, Newsom's signature issue, became a test of the city's values.

Newsom and other city officials claimed out-of-towners were coming into San Francisco to get public assistance checks. And those that were here were likely using that money for drugs and alcohol. In one television ad for Care Not Cash, a series of disheveled men speak directly into the camera.

"I take your cash, and I buy drugs," the commercial begins, "crack, heroin, alcohol."

"That was pretty harmful to public sentiment around supporting real solutions," said Jennifer Friedenbach, executive director of the Coalition on Homelessness.

Voters sided with Newsom, and the measure won with 60% approval approval. It was the boost Newsom needed to launch his mayoral campaign a few months later, DeLeon said.

"It put him on the map, politically," DeLeon said. "It certainly put a spotlight on him."

Trent Rhorer, who has served as the executive director of San Francisco's Human Services Agency since 2000 and oversaw the implementation of Care Not Cash, remembers a young supervisor and later mayor who seemed to genuinely care about the plight of homeless residents.

Rhorer received so many requests for information from Supervisor Newsom that he set up weekly meetings. Reports that Rhorer gave him would return dog-eared and highlighted.

"We would have these two-hour sessions ... and the meetings would just go on and on and on," Rhorer recalled. "When he left the office, [Newsom] knew more about homelessness than I did, honestly."

Care Not Cash officially launched in May 2004, reducing the amount of money homeless residents received from a maximum of $410 per month to $59. In exchange, program enrollees got food and a guaranteed bed at a shelter or in a single-room occupancy hotel.

When the city updated its homeless survey in 2005, it saw a 28% reduction in the number of homeless people compared to 2002. Friedenbach believes it's unlikely Care Not Cash contributed to that reduction since the program didn't create any new housing. Newsom's predecessor, Mayor Brown, approved thousands of new affordable housing units, which Friedenbach said had just finished construction around that time and probably made more of a difference.

But Rhorer says ending homelessness was never the goal.

"It was about welfare reform," Rhorer said. And in that way, it worked.

Once Care Not Cash began in the spring of 2004, the city immediately saw a reduction in the number of homeless people claiming benefits. In December 2003, there were 2,632 people who received assistance, which dropped to 642 in December 2007.

The number of people experiencing homelessness then remained relatively stable during Newsom's tenure until it began to increase again in 2011, right around the time he left to become lieutenant governor, growing from nearly 5,700 people to more than 8,000 in 2019.

Whether Newsom's leadership would have helped stem the increase is impossible to know, but Bevan Dufty thinks it would have helped. Dufty, now a BART board director, served on San Francisco's Board of Supervisors with Newsom. He later served as Mayor Ed Lee's head of homeless policy.

"Gavin was mayor during a lot of years when the cupboard was dry," when the Great Recession hit, Dufty said. "I think San Francisco's homeless problem would seem very different because he wouldn't be afraid, if he had had the resources, to put them to use to house people."

Not much has changed about Care Not Cash since its inception, Rhorer said, except that now, the city uses a more sophisticated screening matrix to prioritize people who are disabled, chronically homeless or have other special needs — and the amount of public assistance has grown.

As mayor, Newsom had also launched an ambitious 10-year plan in 2004 to end chronic homelessness and pledged to build 3,000 new units of supportive housing. By 2014, San Francisco built 2,669 of the units that Newsom pledged as mayor but homelessness still rose — climbing to 6,775 people by 2015.

And it continues to grow.

A decade after Newsom left the mayor's office, homelessness is a bigger issue than ever, with solutions seeming more out of reach than ever before.

He kicked off the year with a proposal to direct $1.4 billion of the state budget to pay for rent subsidies, board and care homes, health services and affordable housing, and then went on a statewide tour of emergency shelters and mental health care centers. And he started distributing the first two dozen of 100 former FEMA trailers and tents to provide immediate housing for people experiencing homelessness.

On Wednesday, Newsom said the state would make available 286 state-owned properties such as vacant lots, fairgrounds, armories and other state buildings for potential shelter options that local governments can use for free.

To speed up construction of affordable housing and shelters, Newsom said he would like to bypass state environmental reviews, which are sometimes used to block and delay projects. He also urged the Legislature to reform land use laws to eliminate delays on affordable housing projects around transit hubs and downtown areas.

"I respect local control, but not at the cost of creating a two-class California," he said.

Friedenbach, a staunch critic of Newsom's tenure in San Francisco, is hopeful. She was pleased to see Newsom's executive order to use surplus state land for emergency shelters and his push to provide significant one-time funds to address homelessness.

"I'm a big believer in redemption," she said.