Accessibility links
Bernie Sanders Is The Favorite To Win The Nevada Caucuses Sen. Bernie Sanders is the favorite, but does Elizabeth Warren peel away some progressives after a fiery debate performance? Former Vice President Biden has a lot on the line — and a lot to prove. 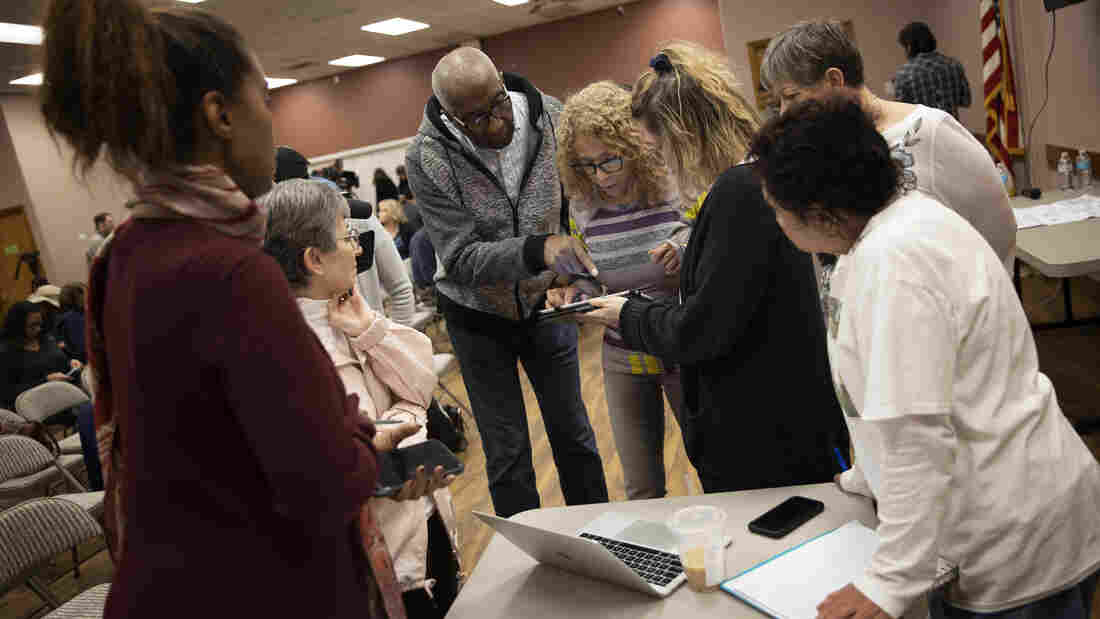 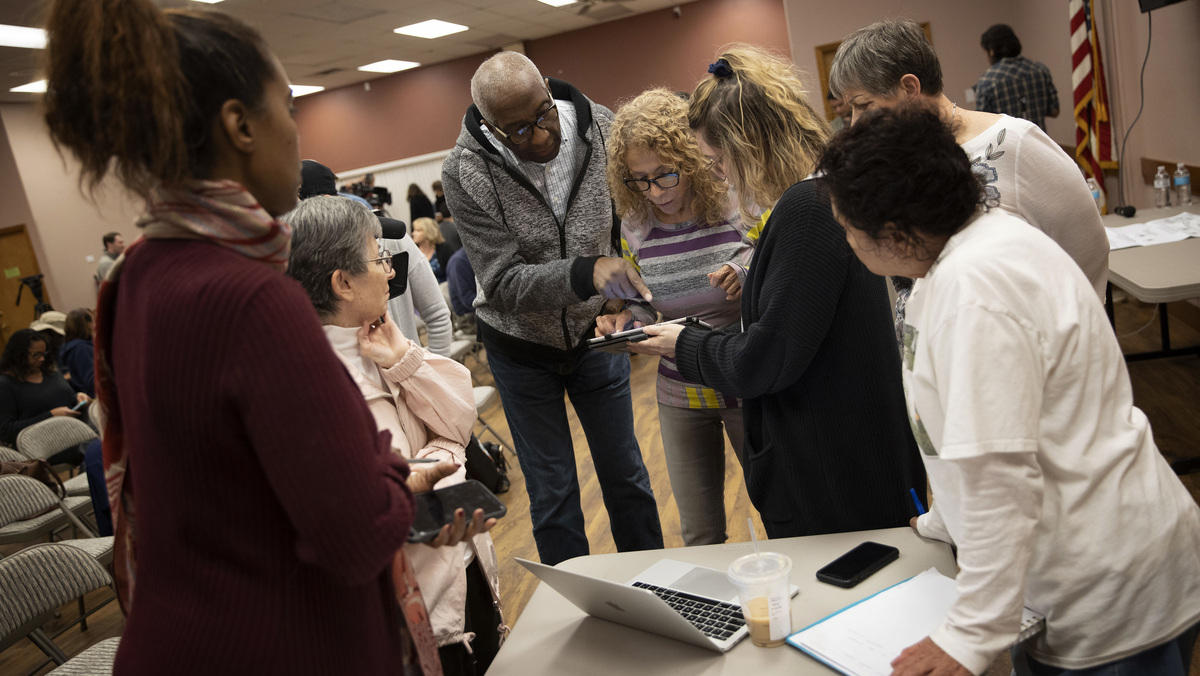 It's caucus day in Nevada!

Today's election will feature the most diverse electorate yet in this Democratic presidential nominating contest.

And it presents a challenge for each of the candidates on the ballot. Vermont Sen. Bernie Sanders, who finished second in Nevada in 2016, is the favorite in yet another race, as the more moderate candidates continue to duke it out.

Here are six things to watch:

1. Does Sanders expand his base? 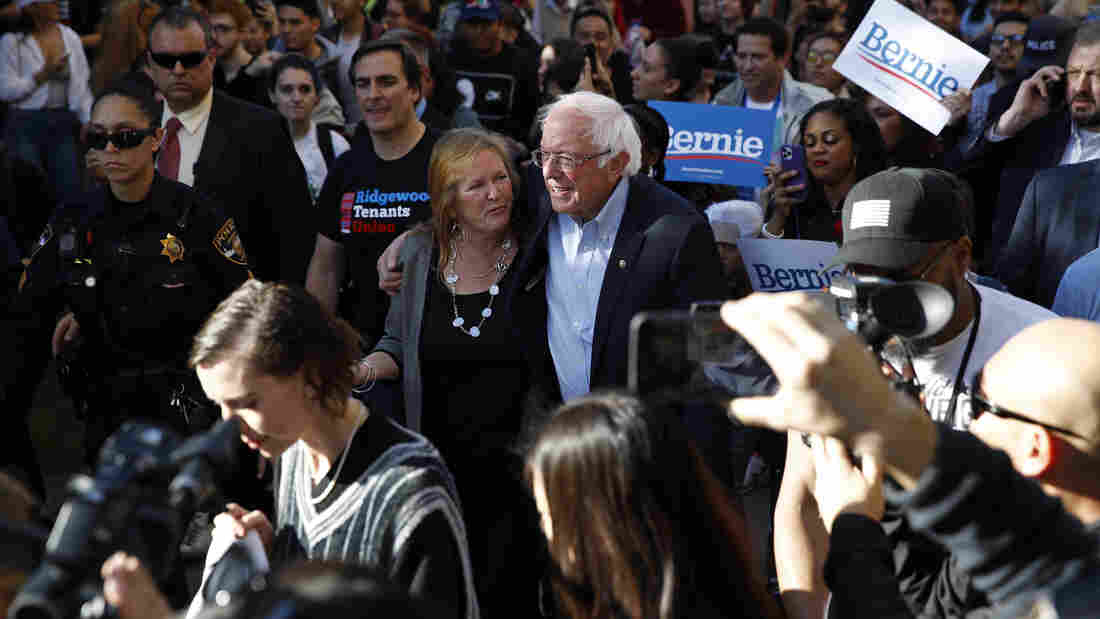 Democratic presidential candidate and Vermont Sen. Bernie Sanders and his wife, Jane O'Meara Sanders, lead supporters to an early voting location after a campaign event at the University of Nevada, in Las Vegas on Tuesday. Patrick Semansky/AP hide caption 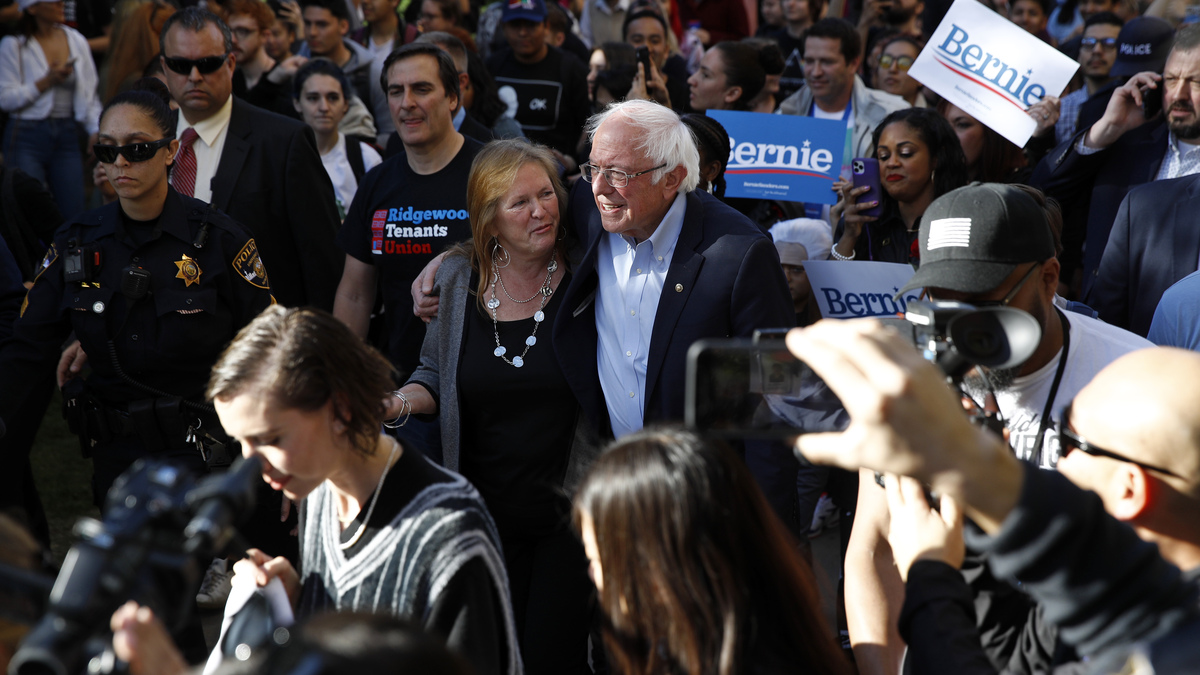 Democratic presidential candidate and Vermont Sen. Bernie Sanders and his wife, Jane O'Meara Sanders, lead supporters to an early voting location after a campaign event at the University of Nevada, in Las Vegas on Tuesday.

National polls, like the most recent NPR/PBS NewsHour/Marist poll, have started to show Sanders expanding beyond his loyal base of young voters and progressives. But so far, he has won only about a quarter of the vote in both Iowa and New Hampshire.

The higher the percentages he starts receiving, the better the case he will have to get the nomination with the pledged delegate lead but without an absolute majority.

It doesn't help him win over nervous moderates or establishment Democrats when he perpetuates conspiracies about The Washington Post and its owner Jeff Bezos for the Post's reporting, like he did Friday.

The newspaper reported that U.S. officials had told Sanders' campaign that Russian intelligence agents are trying to help the candidate and to meddle in the Democratic elections.

For now, though, Sanders doesn't need to win over that part of the party. He just needs to keep winning — and accruing delegates.

2. Does Warren capitalize on her fiery debate performance? 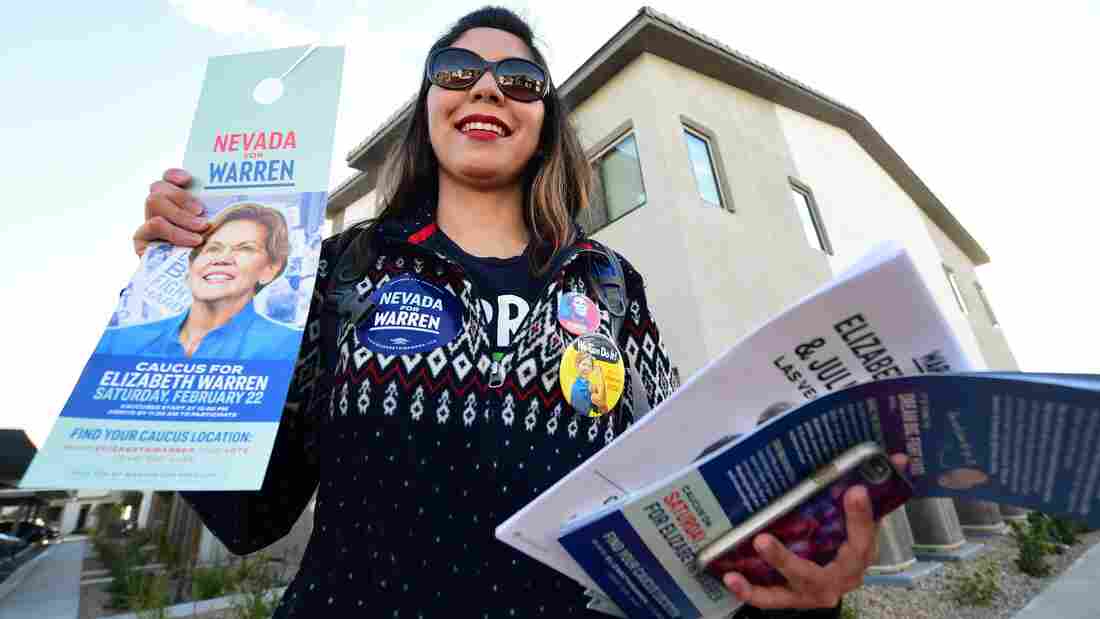 Elizabeth Warren supporter Ninna Diaz poses with material she will distribute while out knocking on doors in Las Vegas ahead of Saturday's caucuses. Frederic J. Brown/AFP via Getty Images hide caption 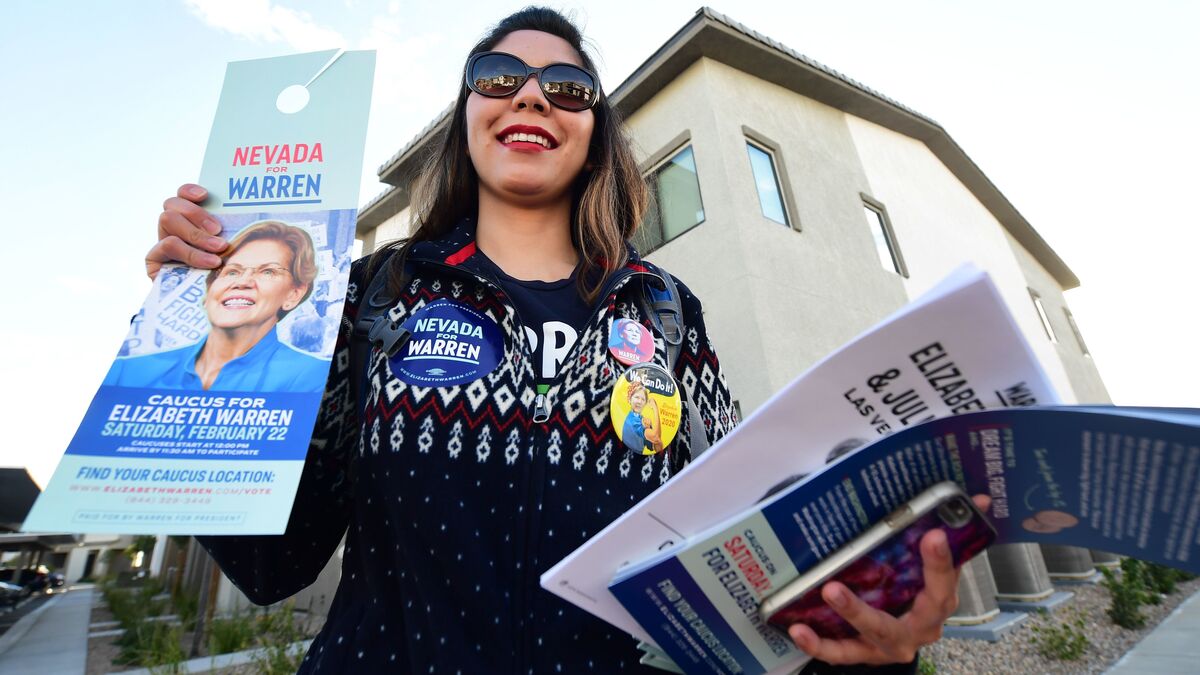 Elizabeth Warren supporter Ninna Diaz poses with material she will distribute while out knocking on doors in Las Vegas ahead of Saturday's caucuses.

Sen. Elizabeth Warren won the most plaudits from progressives after her debate performance because of the way she took the fight to former New York Mayor Michael Bloomberg.

She maintains a solid organization, and if she does well in Nevada, where will that vote come from? Does she pick off some of Sanders' progressive support, given she's second to Sanders in most polling with them? Or does she take from former South Bend, Ind., Mayor Pete Buttigieg, since they are both vying for college-educated whites? Or would it be a little of both?

In any event, Nevada will show if Warren is back — and if her approach in Wednesday's debate worked. 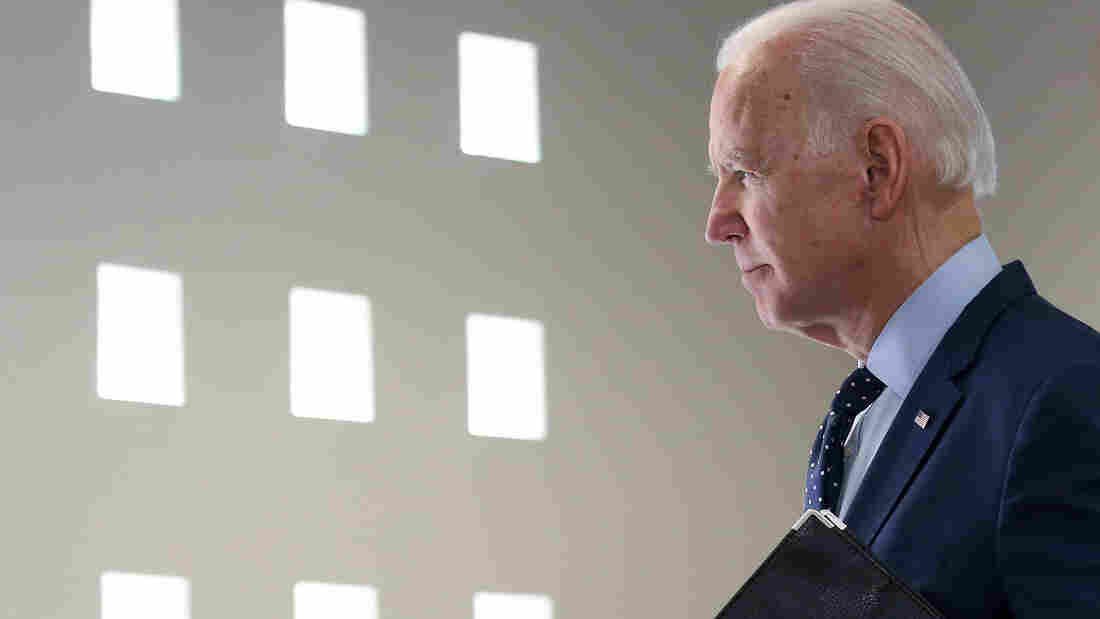 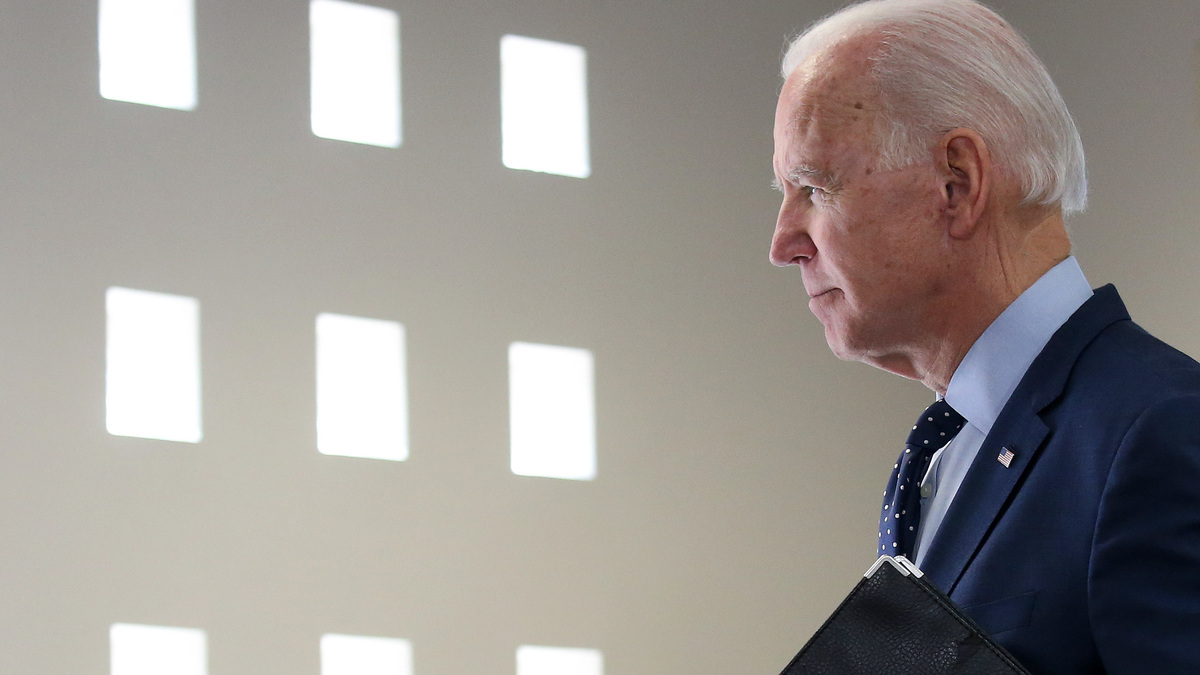 Maybe no one has more on the line Saturday than former Vice President Joe Biden.

After lackluster showings in Iowa and New Hampshire, his candidacy is hanging by a thread. He has been saying he would do better with voters of color, so here's his chance to prove it. Nevada's electorate in 2016 was 41% nonwhite, including 13% black. He has polled well with black voters for the better part of a year in this campaign, but there have been signs recently that he's slipping.

Nevada entrance polls will provide the first measure of how well Biden is holding up with black voters.

Black voters, by the way, put Hillary Clinton over the top in Nevada in 2016 and helped her to a win. Clinton lost both the white and Latino votes (19% of the electorate overall) to Sanders. But she won 76% of African Americans.

One other thing Biden has to hope for — that Bloomberg's uneven debate performance means voters will give him a second look.

4. Can Buttigieg or Klobuchar get out of each other's way? 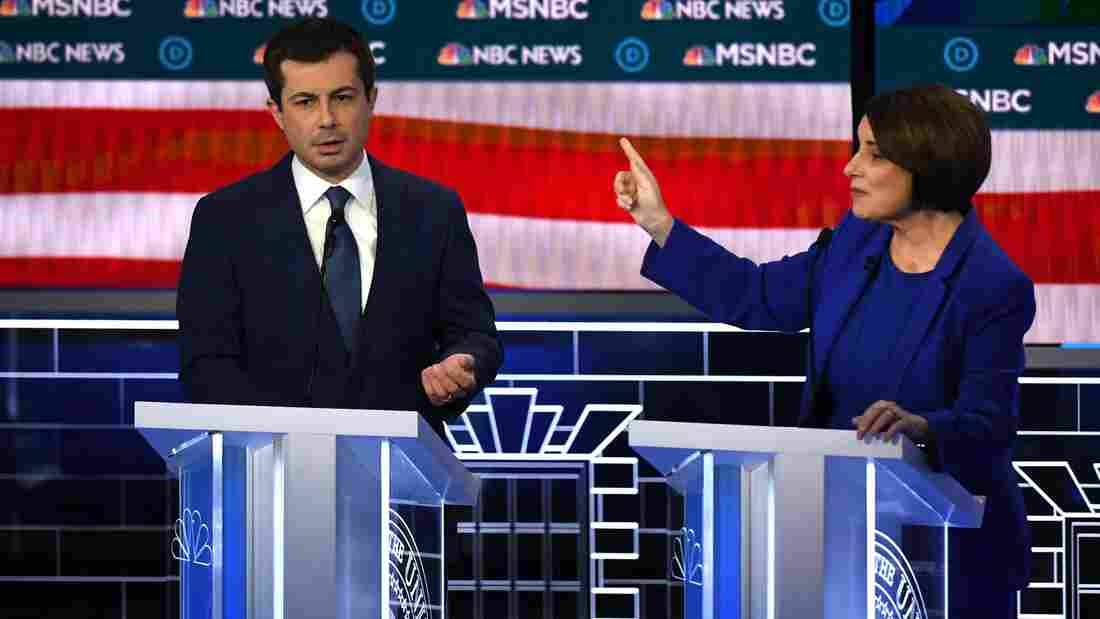 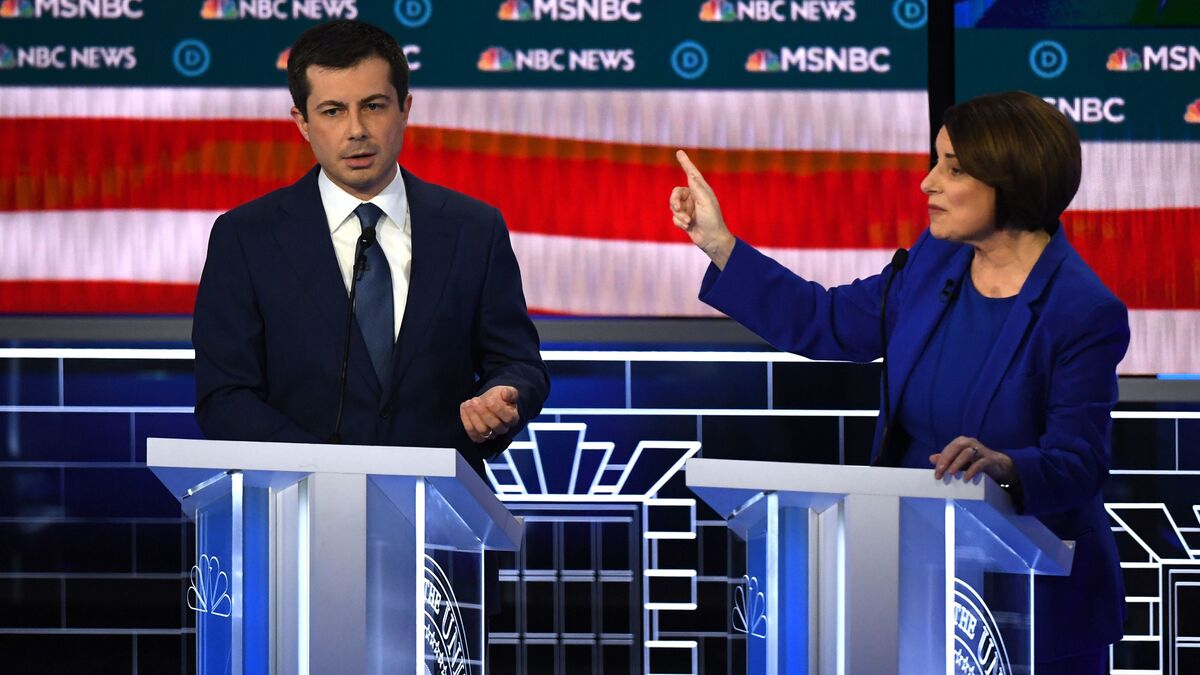 Buttigieg and Minnesota Sen. Amy Klobuchar tussled quite a bit at Wednesday's debate. That's because they see the other as a threat in the moderate lane.

Buttigieg is the overall delegate leader in this very early stage of the contest (just 2% of the delegates have been allocated so far). And yet, he's treated as something of an afterthought for the nomination. That's because of his inability – thus far – to be able to win over voters of color. Nevada could go a ways to changing that, if he shows at least some strength with a more diverse electorate.

Klobuchar, on the other hand, needs to show she's more than just a flash in the New Hampshire pan and beat out some of her moderate rivals. She's going to need to to keep the money flowing, so she can compete in lots of (expensive) places Super Tuesday, March 3.

It's especially important she have a good showing in Nevada, considering just how important momentum is to her cause. Even if she does well in the next contest, South Carolina, there will only be three days between South Carolina and Super Tuesday.

5. What about all that Steyer money?

For all the attention paid to Bloomberg's money — and with reason, he has spent an unparalleled $425 million — wealthy venture capitalist Tom Steyer hasn't exactly been shy about opening up his wallet.

Steyer has spent more than $250 million on his campaign, and he has pumped in more than $16 million on ads in Nevada, according to Advertising Analytics. But, so far, it hasn't paid off in votes or delegates (he has gotten zero delegates so far).

Is it all for naught? Does he start changing the dynamic, given how hard he has worked to court Latino voters and African Americans? Or does he wind up just pulling votes away, especially in South Carolina, from, say, Biden?

Not that Steyer seems to care about the calculation of a moderate defeating Sanders. "I am not one of the people who's ever going to join a 'Stop Bernie' campaign," Steyer said on NBC's Meet the Press earlier this month.

6. How does the Nevada Democratic Party perform?

After the debacle in Iowa, Nevada scrapped a reporting app it was going to use that was made by the same company at the center of the controversy in Iowa. But the party then introduced new technology — each of the 2,100 precinct leaders were given iPads to help with caucus calculations.

Training has been conducted throughout the state, but introducing new technology this late in the process is making people nervous.

The party has a good reputation and is confident that things will go well. The party is taking lots of steps, like increasing the number of people answering phones for calling in results, and precincts can do their calculations the old-fashioned way — on paper.

How smoothly — or not — the process goes is going to have consequences.

Former Senate Majority Leader Harry Reid is arguing that with Iowa's collapse, Nevada has a good case to go first. But if things don't go well, it could spell the end for caucuses in more places, as states have increasingly moved to primaries.