Accessibility links
South Sudan Forges Unity Government, Renewing Fragile Hope For Peace President Salva Kiir swore in his rival, rebel leader Riek Machar, as vice president on Saturday. The landmark deal could spell an end to years of violence, but it's not their first attempt. 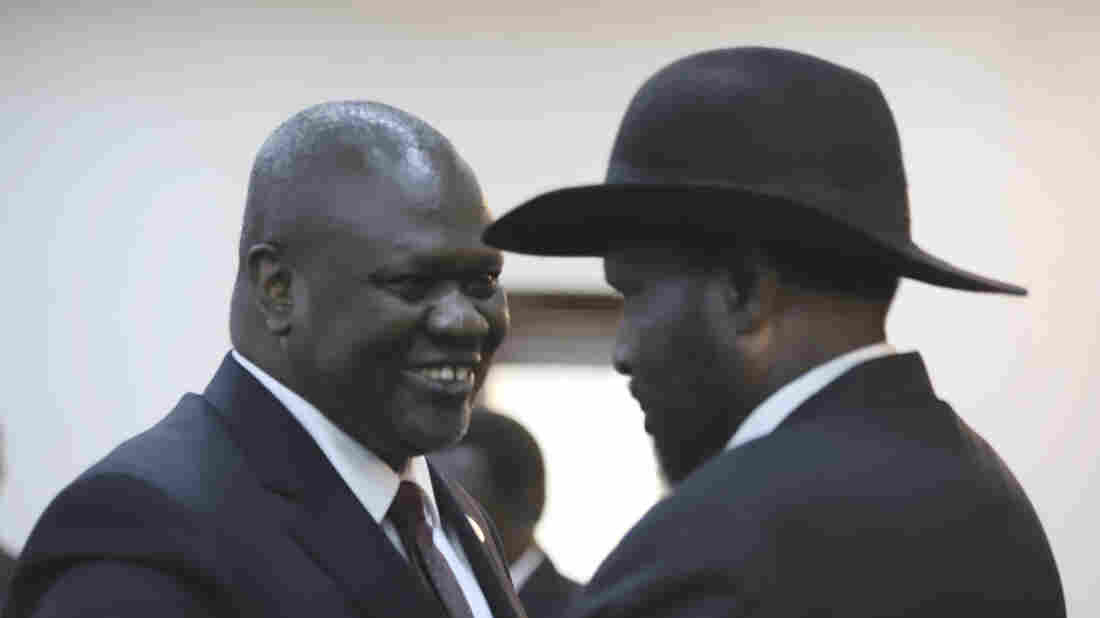 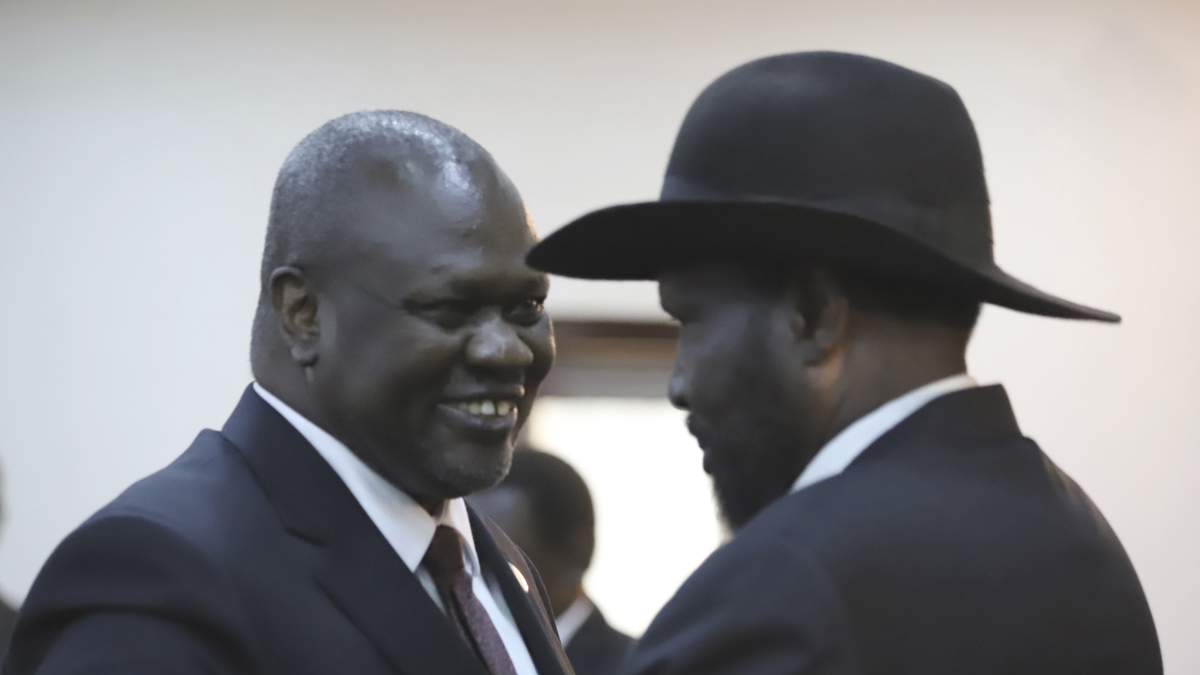 Hope has resurfaced in South Sudan, where two rival leaders shared a landmark gesture Saturday after years of bitter fighting. South Sudanese President Salva Kiir swore in opposition leader Riek Machar as vice president, renewing a tenuous coalition that they have tried and abandoned before — but that, if successful, may offer an end to a conflict that has killed some 400,000 people and displaced millions more.

"This action signifies the end to the war. Peace has come, and it has come to stay," Kiir said at a ceremony attended by journalists and ministers Saturday, according to Reuters. "My brother Dr. Machar and I are now partners in the peace agreement."

Machar, too, promised the South Sudanese people that their newly minted unity government "will work collectively to end your long suffering."

Three other vice presidents were sworn in at the event — though none was as important as Machar, whose personal, political and ethnic acrimony with Kiir helped fuel a brutally violent civil war in the young country for the better part of a decade.

After South Sudan won independence in 2011, Kiir and Machar served as the country's president and deputy, respectively, but they fell out with each other just two years later when Kiir fired Machar for alleged disloyalty. Fighting erupted in late 2013 between the factions led by Kiir, who belongs to the majority Dinka ethnic group, and by Machar, who identifies as Nuer.

And though the two men have made occasional attempts at rapprochement — including a similar deal that brought Machar back in as vice president in 2016 — those agreements never managed to hold the violence at bay for long.

The most recent peace deal was reached in 2018. A few months later, Pope Francis invited the pair of bitter rivals to the Vatican, where he stunned them both by kissing their shoes in a dramatic plea for lasting peace.

Despite the scene — which left Kiir says left him shocked and trembling — they repeatedly delayed their deadline for the coalition's formation. It was only on Thursday that the two men announced that they would formally proceed with the arrangement after reaching a few final compromises.

South Sudan's foreign minister, Awut Deng Acuil, lauded the deal in a tweet as turning point. She described it as a crucial way to "end the suffering of our people, silence the guns and return peace to our country."

Amid the messages of hope, however, the desolation left of the long war remains. The same day that Kiir and Machar announced their unity government, the United Nations said that that some 6.5 million people — a majority of the country's population — face the possibility of starvation this coming summer because of the violence and the corruption of the South Sudanese government.

"Today in South Sudan, civilians are deliberately starved, systematically surveilled and silenced, arbitrarily arrested and detained and denied meaningful access to justice," the U.N. Commission on Human Rights in South Sudan said in a report released Thursday, emphasizing that "redress for these violations and related crimes is a precondition for sustainable peace and security."