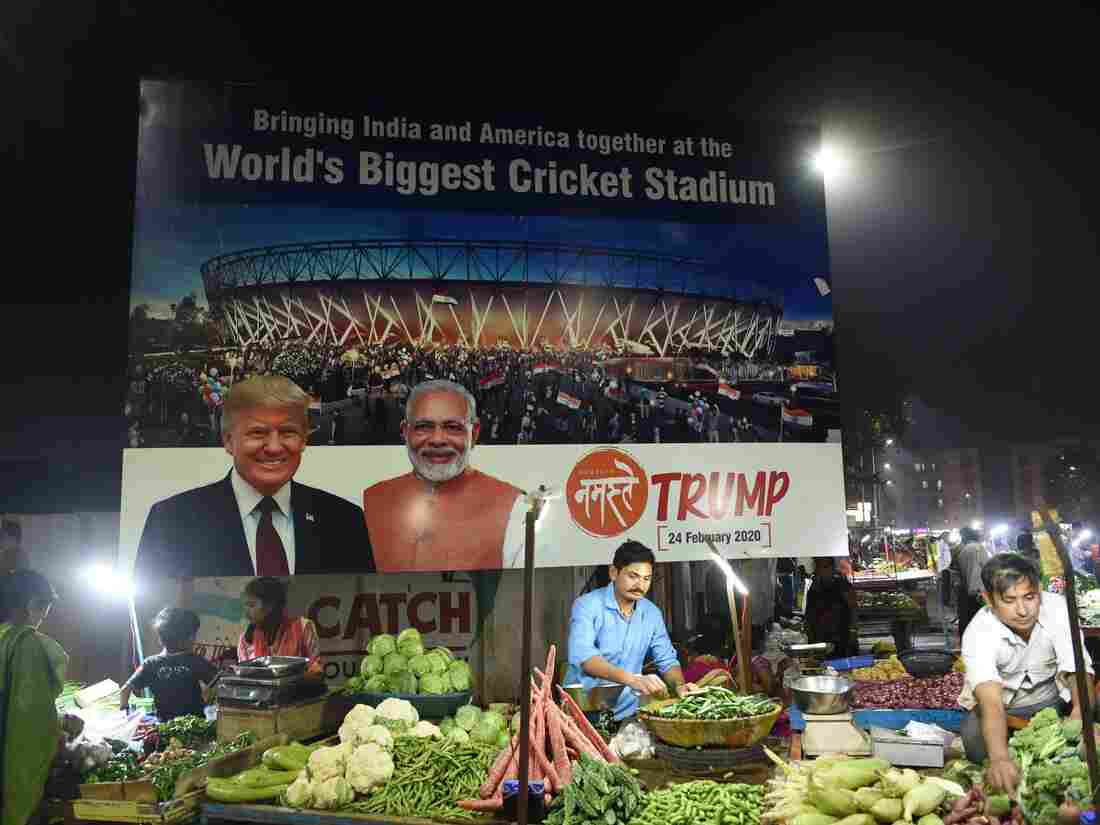 Vegetable vendors wait for customers below a billboard showing President Trump and Indian Prime Minister Narendra Modi, with the Sardar Patel Stadium in the background, on the outskirts of Ahmedabad on Feb. 19. Sam Panthaky/AFP via Getty Images hide caption 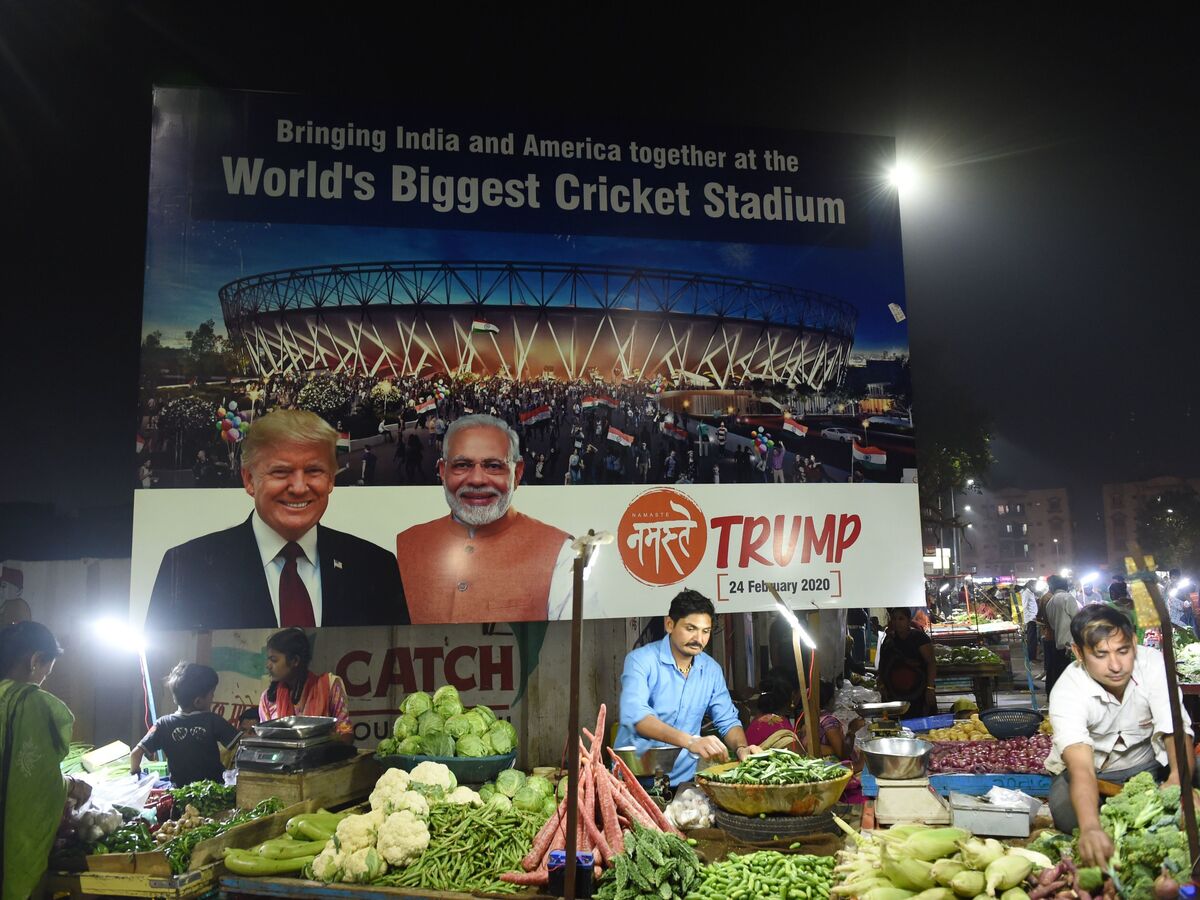 Vegetable vendors wait for customers below a billboard showing President Trump and Indian Prime Minister Narendra Modi, with the Sardar Patel Stadium in the background, on the outskirts of Ahmedabad on Feb. 19.

When President Trump arrives on his first official visit to India on Monday, his first stop will be Ahmedabad, the largest city in the western state of Gujarat. It's the place where Indian freedom leader Mahatma Gandhi built his ashram, a place for prayer and communal living, on a riverbank lined with Indian lilac trees.

Each dawn, Gandhi preached his doctrine of nonviolence to followers on the banks of Ahmedabad's Sabarmati River. It's also where he set off, in 1930, on his 240-mile Salt March, an act of civil disobedience against British colonial rule.

These days, the ashram is surrounded by busy highways, bridges and shiny new office complexes. The man credited with much of the city's development is Narendra Modi, who served from 2001 to 2014 as chief minister of Gujarat.

Now in his second term as India's prime minister, Modi is making a point of showing off his home state to the U.S. president. On Monday, Modi will be hosting a "Namaste, Trump!" rally at a newly renovated cricket stadium which seats more than 100,000 — returning the favor to Trump for holding a "Howdy, Modi!" rally in Houston last year with tens of thousands of Indian-Americans. 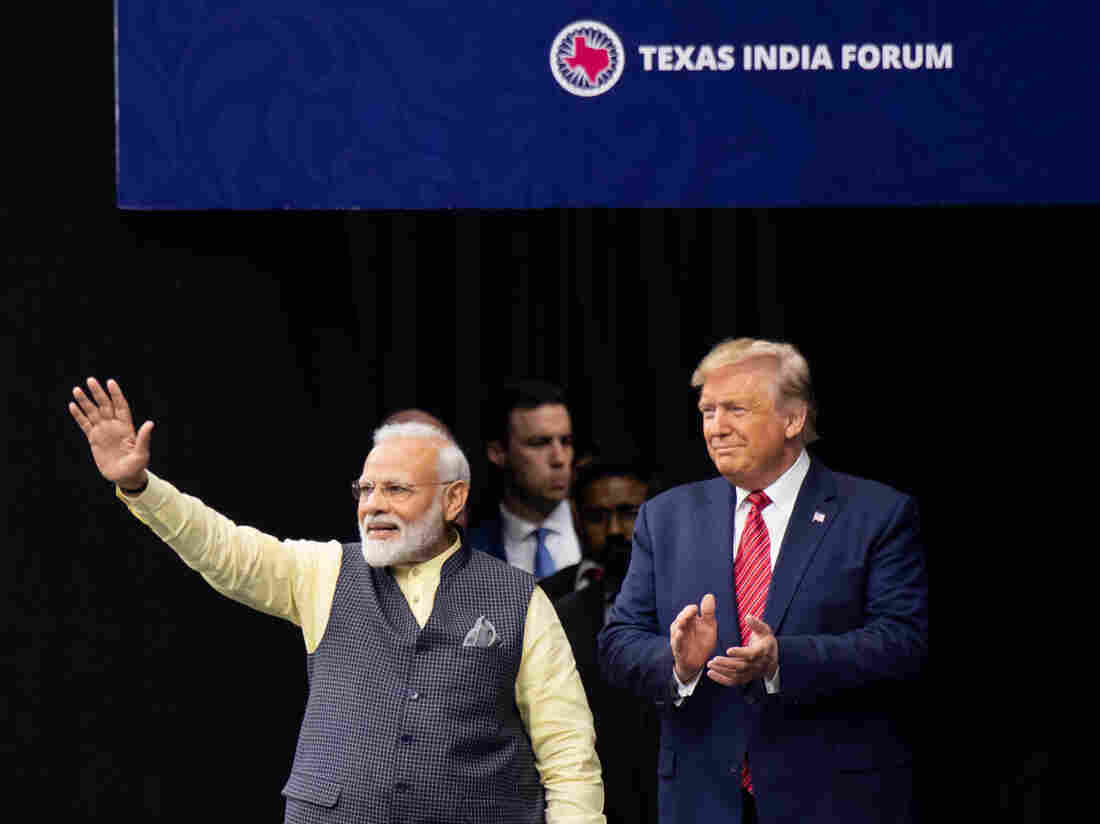 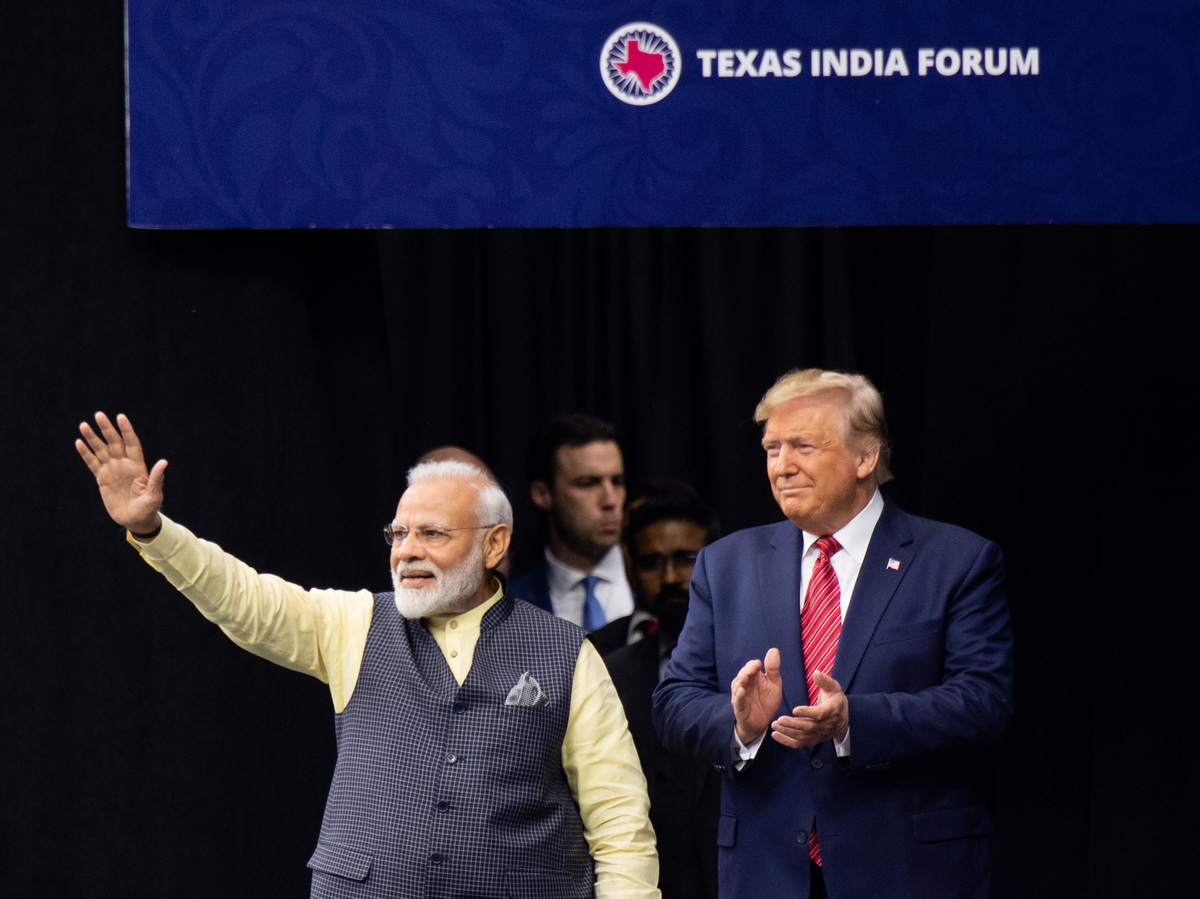 The two leaders will head Monday night to New Delhi ahead of talks the following day focusing on strategic partnership and trade. India and the U.S. have boosted the number of military exercises they conduct jointly in recent years and Washington increasingly looks toward the world's largest democracy as a buffer against China's growing power in the Indo-Pacific region.

It has encouraged India to buy U.S. weapons, rather than Russian ones, and India is expected to announce additional U.S. weapons purchases during Trump's visit. Modi and Trump may also address trade tensions; the U.S. and India have been engaged in trade talks for more than 18 months, after imposing tariffs on each other's imports.

While running his home state, Modi launched what's become known as the "Gujarat model" of development.

In almost every year Modi was chief minister, the state's economy grew faster than the nation's. It was that track record, in large part, that got him elected nationally in 2014. His Hindi campaign slogan promised "achche din" — good days — ahead.

But Modi also presided over a dark chapter in Gujarat, one that many cannot forget. 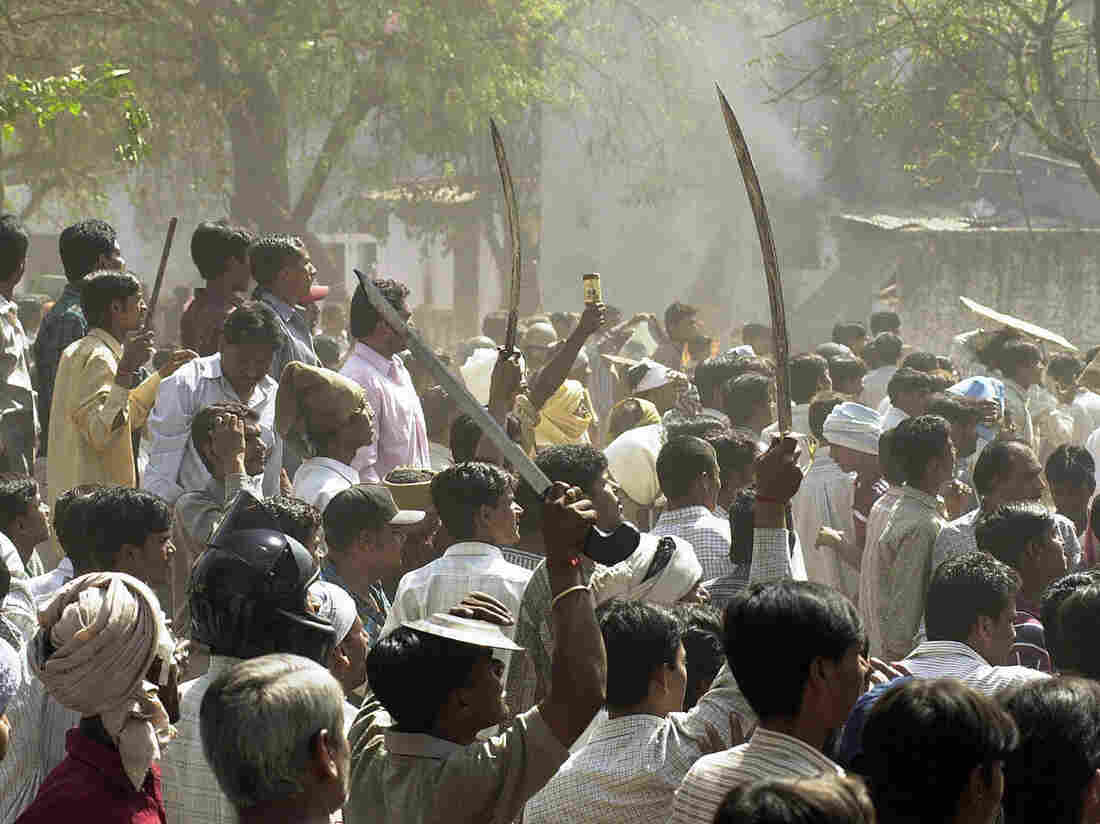 A Hindu mob waves swords at an opposing Muslim mob during communal riots in Ahmedabad in 2002. Sebastian D'Souza/AFP via Getty Images hide caption 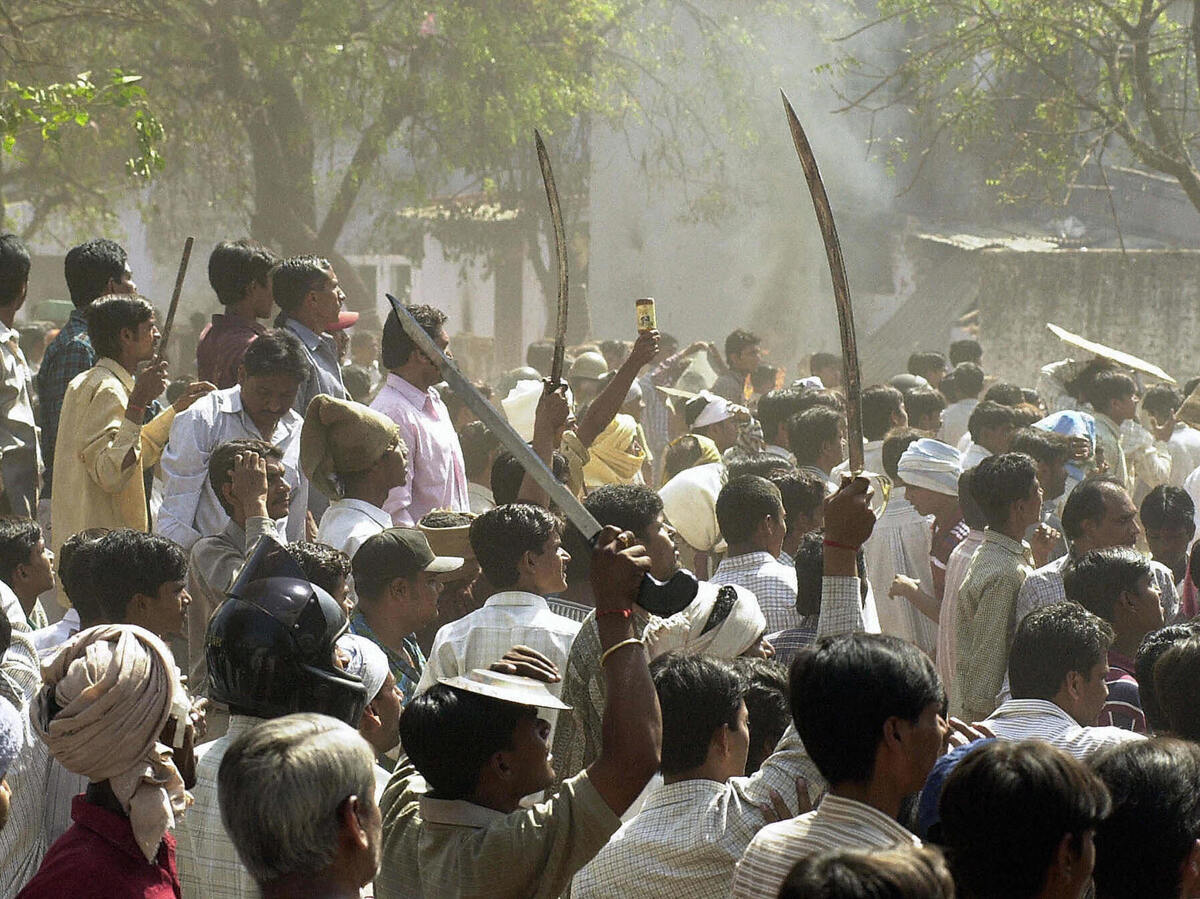 A Hindu mob waves swords at an opposing Muslim mob during communal riots in Ahmedabad in 2002.

Along with becoming a model for economic development, Gujarat also became Modi's "laboratory," Laliwala says, for Hindu nationalism — the idea that India should be a nation shaped by Hindu faith and culture, with special rights for its Hindu majority. (India is about 80% Hindu.)

"Gujarat was [Modi's] first experiment in successfully establishing a Hindu nation, and Muslims have been marginalized from politics and society," Laliwala says. "He saw that as an opportunity to rebuild the BJP here."

The Bharatiya Janata Party is Modi's Hindu nationalist party. For most of Modi's time as Gujarat's chief minister, the Indian National Congress, a rival center-left party, held power nationally. But Modi helped boost support for the BJP, first in Gujarat and then across India, with a mix of "economic development plus Hindu nationalism," Laliwala says. "And Hindu-Muslim division was central to that."

"The whole street was burning"

That division was never more harrowing than in Gujarat in 2002. In February that year, a train carrying Hindu pilgrims was set on fire east of Ahmedabad, in a town called Godhra, which has a large Muslim population. (India is about 14% Muslim, but in Godhra, Muslims make up about half the population.)

The train was returning to Ahmedabad from Ayodhya, where, a decade earlier, Hindu extremists demolished a 16th century mosque. Ayodhya has since become a pilgrimage site for Hindu faithful who want to build a temple on the mosque's ruins.

In Godhra, 59 Hindu passengers died in the train fire. Authorities brought the victims' charred bodies to Ahmedabad and put them on public display.

Anti-Muslim riots erupted across the city and beyond, killing thousands of people, mostly Muslims. In Ahmedabad, many Muslims sought refuge in an apartment building that was home to a prominent Muslim politician named Ehsan Jafri, a former member of India's parliament.

"From a balcony, I watched masked men throw Molotov cocktails at Muslim homes," says Khan, who rushed into the building with her husband and 3-year-old daughter, as a Hindu mob set fire to the lower floors. "I somehow got separated from my husband and toddler. I spent hours hiding upstairs. The whole street was burning." 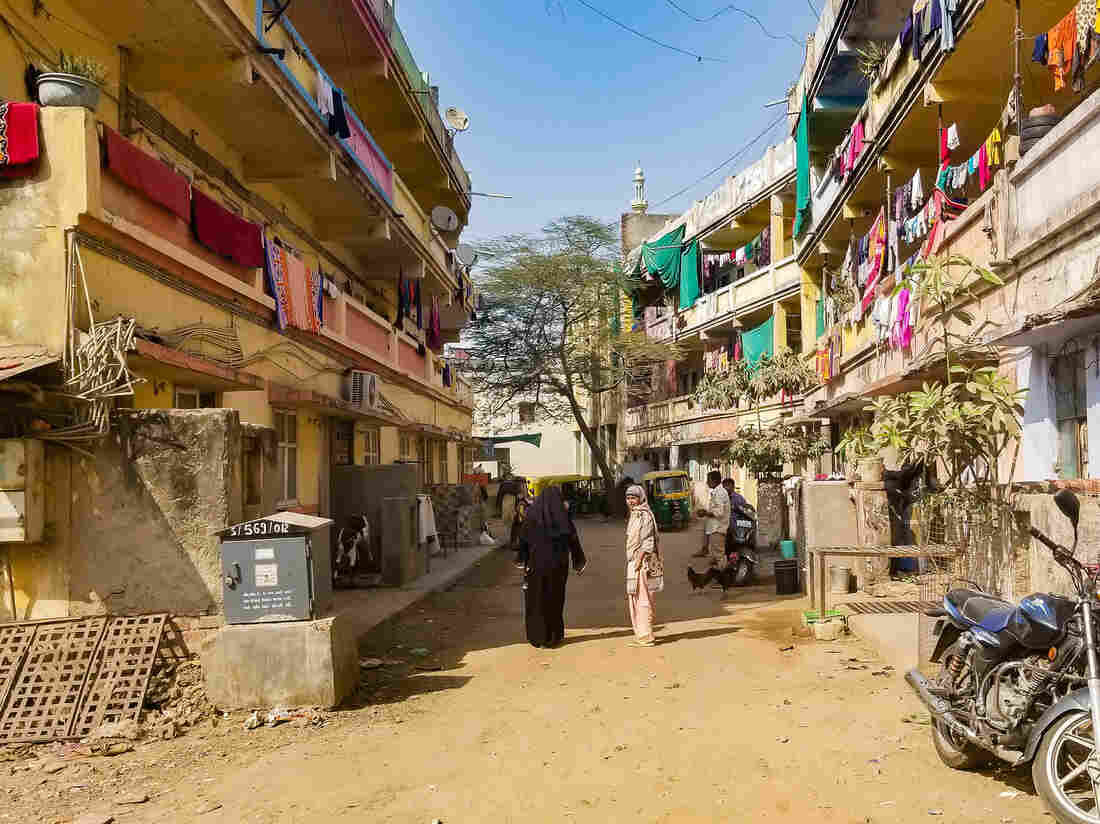 Many Muslims moved to Juhapura, a lower-income neighborhood, after the 2002 riots in Ahmedabad, India. Lauren Frayer/NPR hide caption 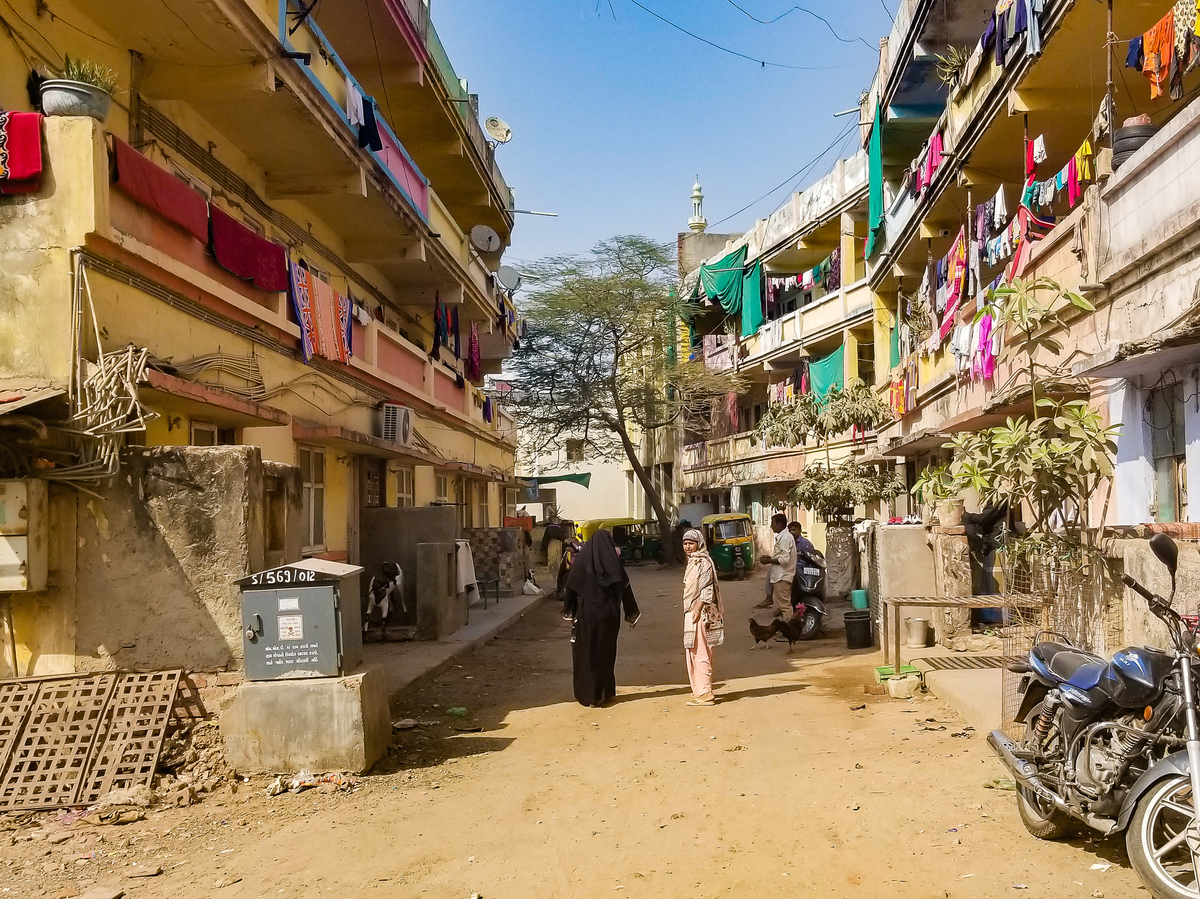 Many Muslims moved to Juhapura, a lower-income neighborhood, after the 2002 riots in Ahmedabad, India.

When police finally rescued Khan, she learned that her husband and child – along with the lawmaker Jafri — were among dozens killed on the building's lower floors.

When the rioting ended, the official death toll was more than 1,000, including 790 Muslims and 254 Hindus. But the real numbers are believed to be much higher. Many victims were so badly burned or mutilated that their bodies were never identified. Thousands of Muslims were displaced after their homes were destroyed by Hindu mobs.

Khan says she was never issued death certificates for her husband and child, and without them, has been unable to claim a widow's pension. Her other children, now grown, help support her.

Human rights groups and others have accused Modi and his state government of turning a blind eye and failing to halt anti-Muslim violence or pursue justice for the perpetrators. In a legal petition, Jafri's widow Zakia listed Modi among 63 suspects in her husband's death.

She says her husband "made over a hundred phone calls for help" to Modi aides from inside the Gulbarg Society, as mobs threatened to kill him. Witnesses later testified to government-appointed investigators that Jafri even called Modi himself, and that the chief minister refused to deploy police to rescue him.

After the killings, Modi embarked on a tour of his state, delivering fiery speeches in which he mocked Muslims and accused them of siding with the country's arch-rival Pakistan. He accused anyone who criticized his handling of the riots as "power-hungry people who are out to defame Gujarat."

Modi never faced trial and has always denied any role in the killings. But allegations persisted, and for years, the United States refused to grant him a visa — until 2014, just before he was elected prime minister.

In 2008, India's Supreme Court appointed a special panel to investigate the 2002 Gujarat riots. Two years later, the panel questioned Modi for 10 hours about his alleged role in Ehsan Jafri's killing and cleared him of any wrongdoing. Zakia Jafri appealed, and her case is still languishing in Indian courts.

After the 2002 riots, Hindus and Muslims in Gujarat became more segregated, with fewer religiously mixed neighborhoods, and Modi played more overtly to his Hindu base. The number of Muslims in Gujarat's state assembly has dwindled, even though they make up about 10% of the state's population. For the past 30 years, Gujarat has not sent a single Muslim lawmaker to India's parliament.

In 2014 and 2019, Modi's BJP won decisive national victories. The party has implemented his agenda promoting Hindu nationalism across India, with laws like the controversial Citizenship Amendment Act, which excludes Muslim refugees from a new fast-track citizenship scheme. Critics say it violates the secularism enshrined in India's constitution. Protests have erupted nationwide.

But Modi remains popular in his home state — at least among non-Muslims.

"He made infrastructure very well. He is a true leader," says Bhakti Vamja, an 18-year-old medical student, speaking on a riverfront promenade in Ahmedabad built during Modi's time as chief minister.

"I feel proud of being a Gujarati," she says. "I belong to this very significant state of India, which is developing."

That development is what Modi aims to showcase when Trump visits Monday. It's his legacy.

But so are the divisions. One place Trump has no plans to visit while in Ahmedabad is the sprawling Juhapura neighborhood south of the riverfront, with its dusty, unpaved roads, tangles of electricity wires and laundry draped across balconies. It's where the widow Abeda Khan and thousands of other Muslims took refuge after the 2002 riots. Eighteen years later, most of them still live there, segregated, unable to forget.