Accessibility links
Daredevil 'Mad' Mike Hughes Killed In Crash Of Homemade Rocket Mike Hughes promoted himself as believing that the Earth was flat. He launched homemade rockets with the goal of eventually flying to the edge of space to see for himself. 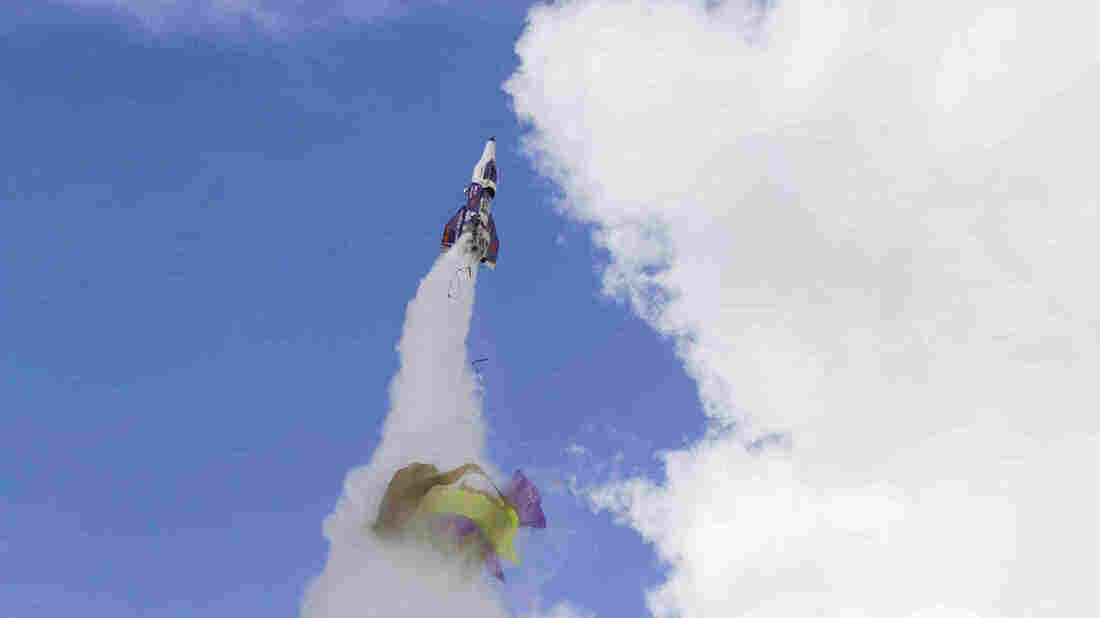 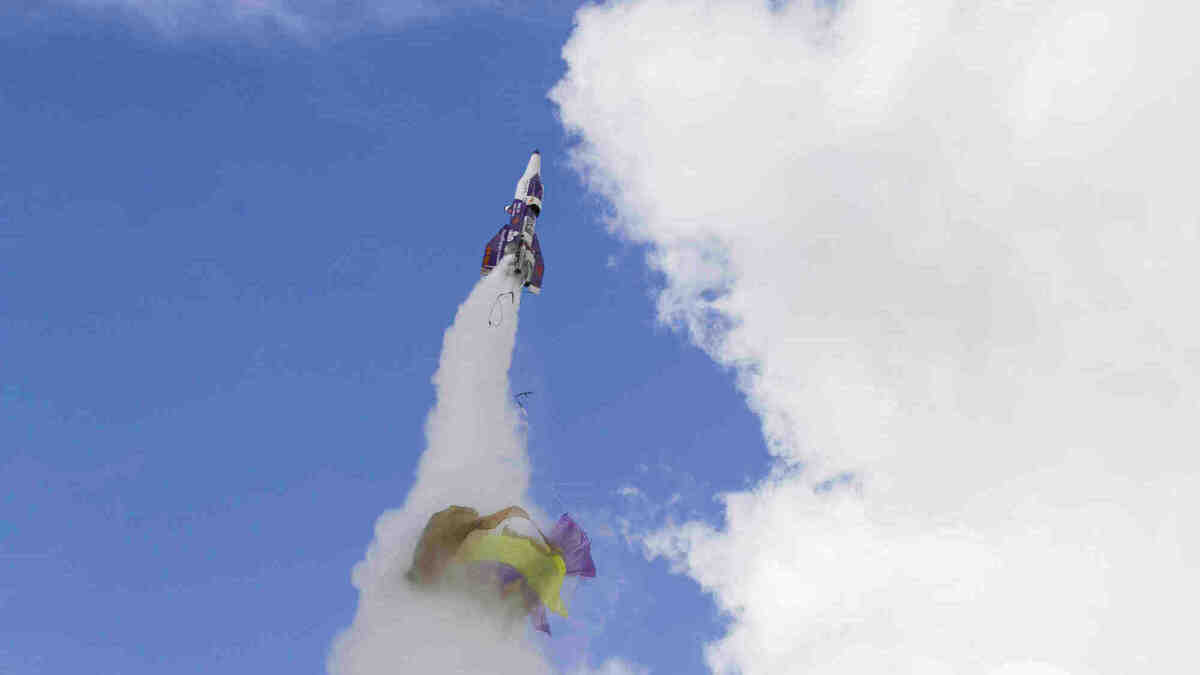 "Mad" Mike Hughes' rocket takes off with what appears to be a parachute tearing off during its launch near Barstow, Calif. Hughes was killed when the rocket crashed Saturday.

The daredevil "Mad" Mike Hughes was killed in a rocket launch gone wrong Saturday in Barstow, Calif., two witnesses to the accident confirmed. He was 64.

It was the third launch for Hughes in one of his homemade rockets and part of his eventual plan to be able to determine for himself, up in the sky, if Earth was as flat as he proclaimed to believe. 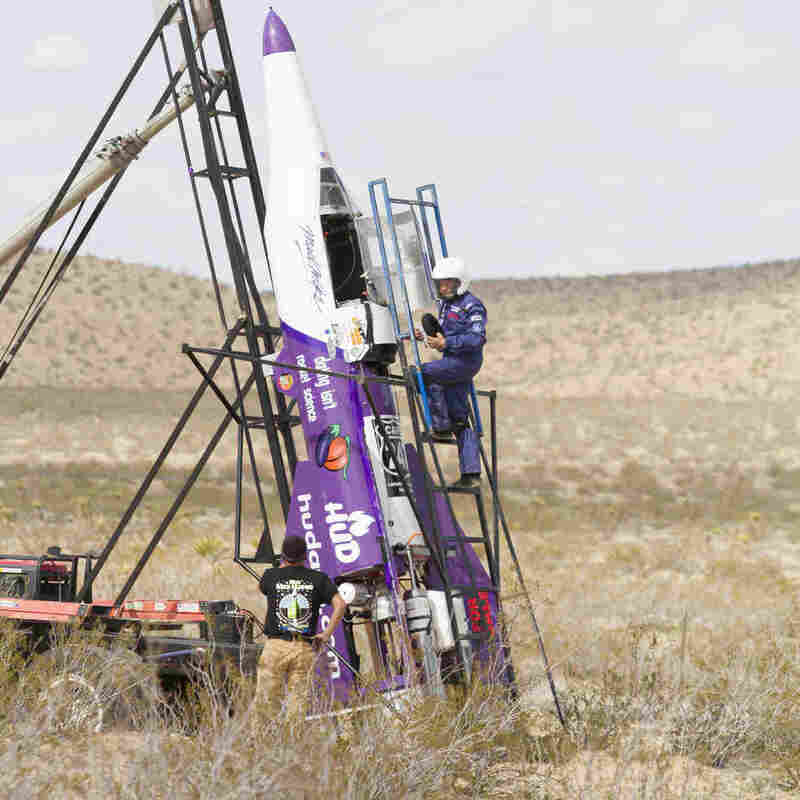 "Mad" Mike Hughes climbs into his home-built rocket before its launch near Barstow, Calif. Hughes was killed when the rocket crashed into the ground shortly after launching. Mercedes Blackehart/AP hide caption 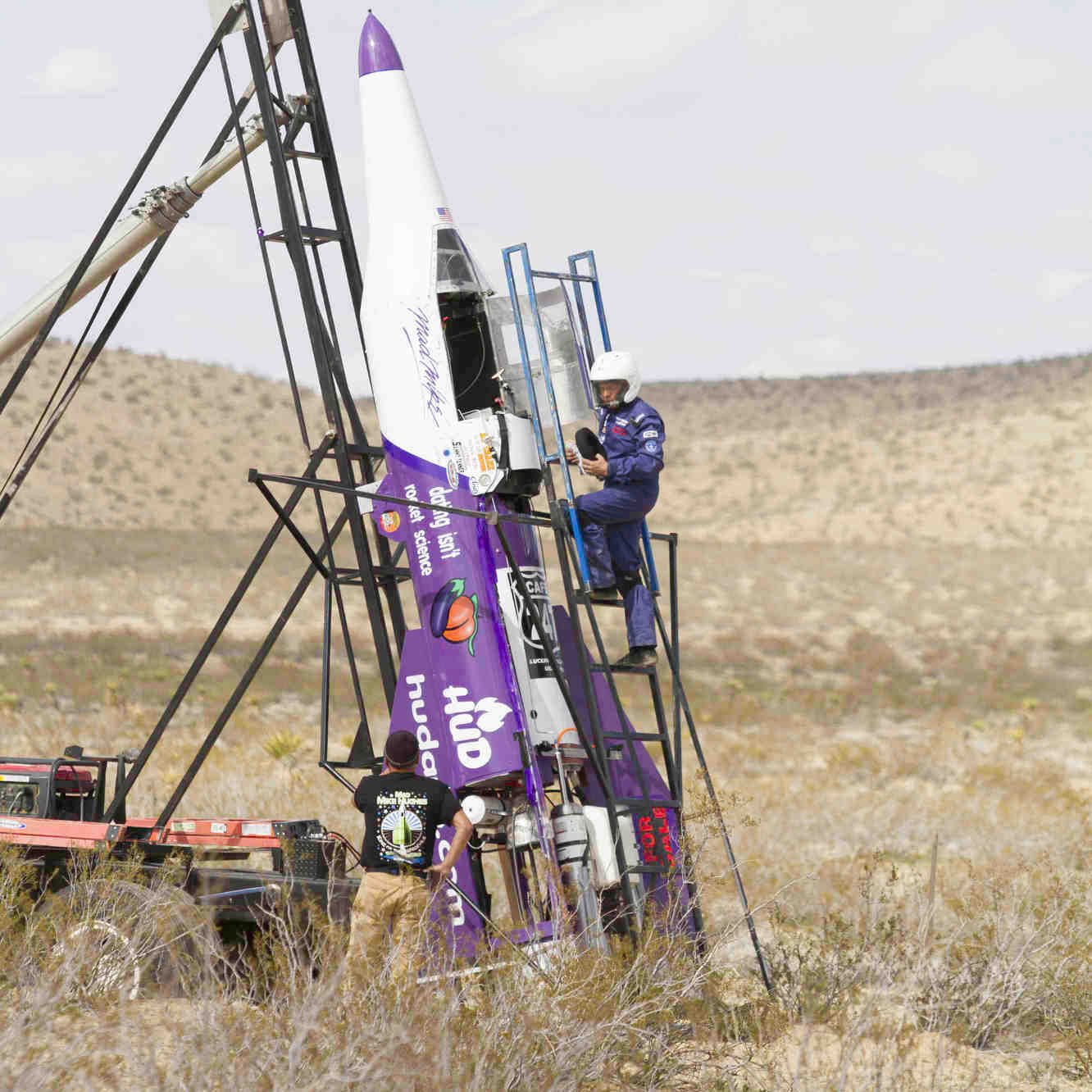 "Mad" Mike Hughes climbs into his home-built rocket before its launch near Barstow, Calif. Hughes was killed when the rocket crashed into the ground shortly after launching.

A steel ladder was attached to the rocket's launch ramp to make it easier for Hughes to enter the cockpit. But when the rocket launched, it hit the ladder, setting the launch on course for disaster.

"It ripped off a parachute can, which deployed the parachute, which got caught in the thrust of the rocket and kind of took the rocket off course a little bit," said Justin Chapman, a freelance journalist who was at the launch site.

The steam-powered rocket wobbled and did a huge arc before crashing less than a minute later.

"He went way up in the sky," Chapman said. "I'm not sure how high. But his goal was 5,000 feet. Then it did an arc and then came straight down and nose-dived into the desert floor about half a mile away from the launch pad."

The San Bernardino County Sheriff's Department said deputies were called at 1:52 p.m. Saturday to private property off Highway 247 in Barstow and pronounced a man deceased "after the rocket crashed in the open desert during a rocket launch event."

"We don't know what happened," said Waldo Stakes, a close friend of Hughes who has been involved in the launches and was at the scene. Stakes said the rocket landed nearly a mile away from the launch site.

There were about 50 to 60 people on hand for the event, including a crew from the Science Channel, which was documenting Hughes' launch as part of a series on homemade astronauts.

Hughes previously launched in March 2018, when he soared roughly 1,875 feet in the air in the Mojave Desert before parachutes deployed and guided the rocket back to the ground. He emerged relatively unscathed at the time, telling The Associated Press he had pain in his back but was glad to not have "chickened out."

Before taking up rocketry, Hughes was a stuntman who jumped limousines. He holds the record for the longest limousine ramp jump, according to Guinness World Records. Hughes jumped a 6,500-pound Lincoln Town Car stretch limo 103 feet at Perris Auto Speedway in 2002.

"He was trying to re-create the Snake River Canyon jump that Evel Knievel tried years ago," Chapman said. "And I think that ultimately didn't come together. But he did just jump limos over big distances and then moved on to building his own rockets and launching himself that way."

Chapman, who has been writing a lengthy profile of Hughes, said the steam-powered rocket launches weren't intended to actually lend credence to Hughes' noted flat-Earth beliefs. They were a short-term step to get publicity and funding for his ultimate goal: a "rockoon" — part rocket, part balloon — "that would take him up about 62 miles to the edge of space, to the Kármán Line, where, as he put it, he wanted to see what shape this planet is."

Hughes was skilled at self-promotion, with posts on his websites detailing a dating app sponsorship, a radio show (on Flat Earth Radio), a cross-country limousine trip to "measure the curvature of the United States," a coloring book, a run for governor of California and more.

The filmmakers who followed Hughes to make the documentary Rocketman — Mad Mike's Mission to Prove the Flat Earth, wrote that Hughes "had a soft spirit and empathy for the world" that was often at odds with his public persona.

"He was often lonely and felt his accomplishments as a daredevil had been forgotten," they wrote. "Ultimately, he just wanted to lead a meaningful life. He had very little money, but he found a way to bring excitement and purpose to his life by doing affordable stunts with rockets that he built himself using spare parts."

Chapman says that Hughes "fully understood the risks" of his rocket launches. "He knew very well, he said very often, that this thing could kill you, he was very well aware of that. He was a daredevil and he was driven by this compulsion to do extraordinary things and inspire people, as he put it."

Stakes simply called Hughes the "greatest daredevil this country has ever seen."