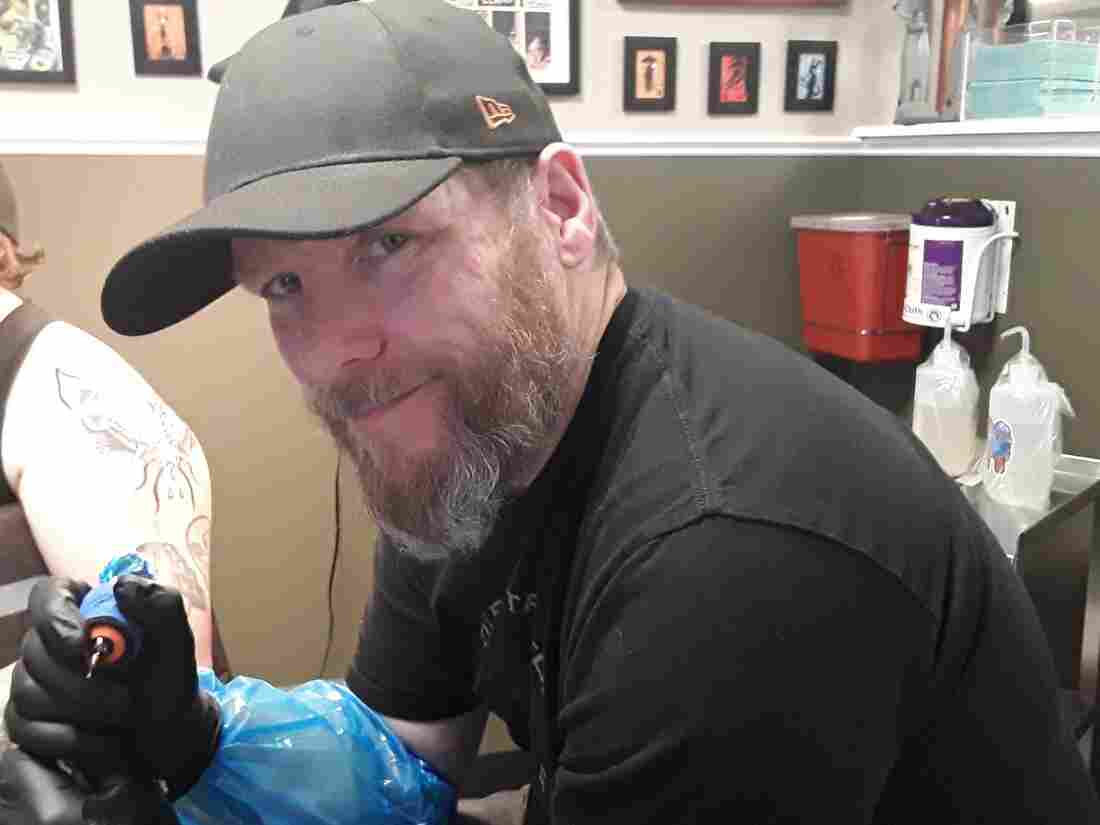 Eric Talbot has been drawing for the Teenage Mutant Ninja Turtles franchise for decades. Talbot says he found himself losing interest in the work, but learning how to tattoo has given him a fresh burst of creativity. Jill Kaufman/New England Public Radio hide caption 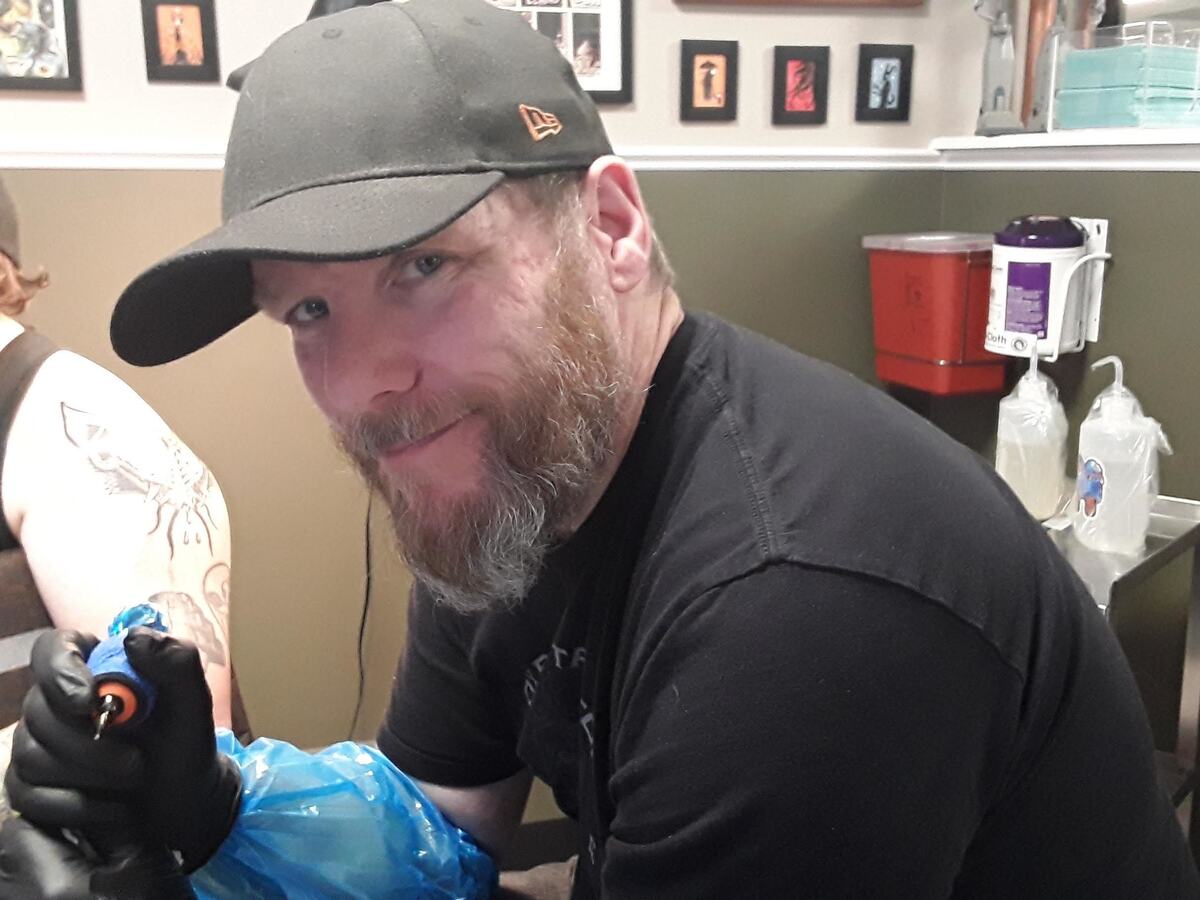 Eric Talbot has been drawing for the Teenage Mutant Ninja Turtles franchise for decades. Talbot says he found himself losing interest in the work, but learning how to tattoo has given him a fresh burst of creativity.

Even on one of the coldest days of winter, there's a lot of bare flesh on display at Oxbow Tattoo in Easthampton, Mass. It's where artist Eric Talbot, who's been drawing Teenage Mutant Ninja Turtles for the franchise since the late 1980s is about to ink his first full-color Ninja Turtle tattoo.

"I have two greens that I'm considering," Talbot says as he follows a stencil outline on his client's arm. "But I'm not going to just have a flat color. "I'm working colors together like I do with my traditional art."

Talbot says as a kid, he was more than happy to stay inside with a pile of paper and copy images he saw in comic books while other children played outside. He also watched a lot of monster movies and began to draw his own creatures.

While Talbot describes himself as shy, he recently finished a two-year tattoo apprenticeship which included studying up on bloodborne pathogens and CPR, because in this new line of work, he's going to be touching a lot of strangers.

"I just find [tattooing] so fascinating," Talbot says. "I love to put the needle in the skin and see that crisp, clean line come out. The canvas is moving! The canvas is pliable!"

Inking his first Ninja Turtle on a true fan

In his first few months of solo tattooing on that canvas, Talbot deliberately stayed away from doing any Ninja Turtles art, until he knew he was ready.

Randy MacArthur, the first of likely many whose skin Talbot will use to ink his signature art, drove a couple of hours from New Hampshire to get here.

He's lying down on a table, right arm under a light. He's been tattooed before, but never by an artist he so admires.

"This one is going to be Donatello on my forearm," MacArthur says.

"Yah, but Donatello is your favorite," Talbot points out. "So we're starting with Donatello. He's going to be the focal point of the tattoo."

The tattoo will grow from there, explains MacArthur, who is part of a dedicated fan base that can't seem to get enough of their Ninja Turtles. They follow Turtle artists on social media, and clamor to meet them at comic conventions. 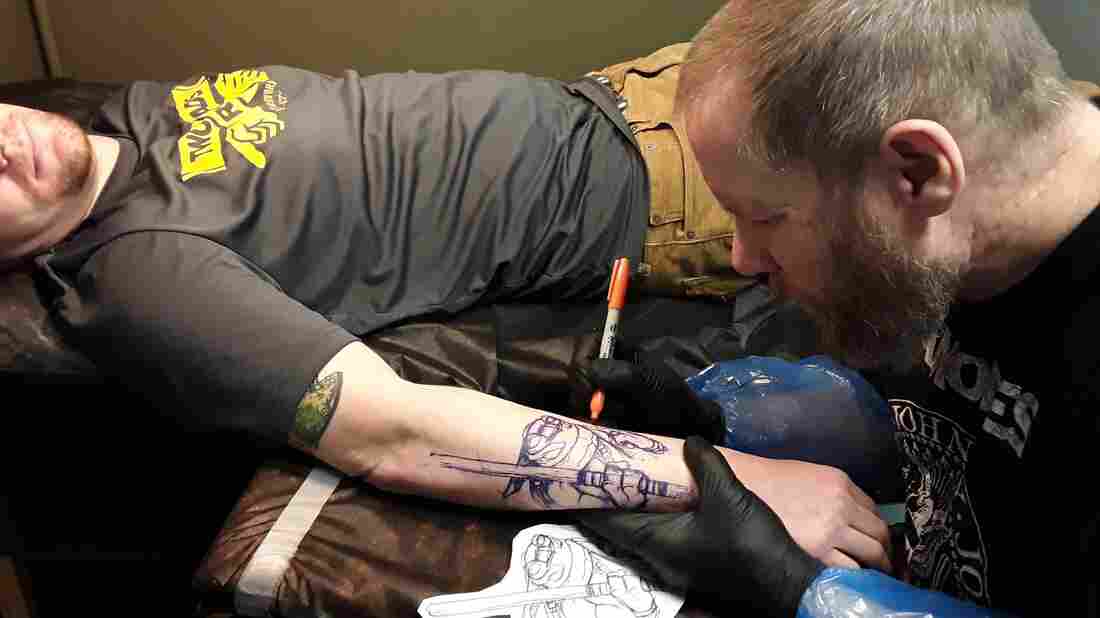 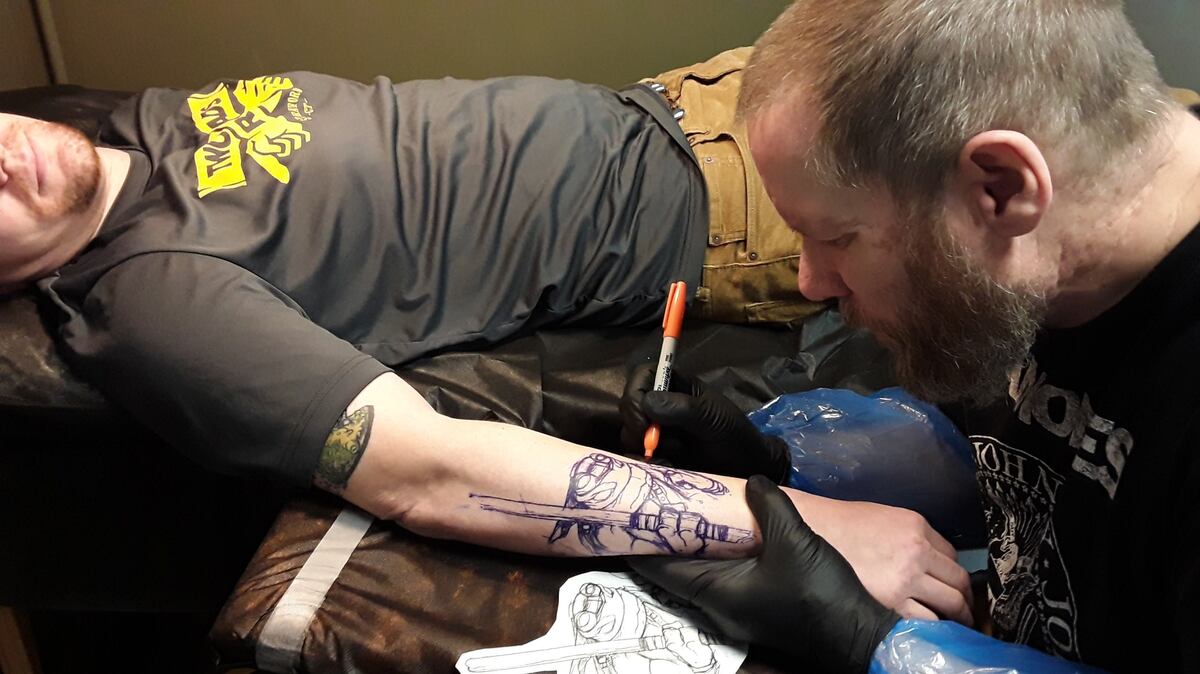 Randy MacArthur, a longtime Ninja Turtles fan, is getting a Donatello tattoo.

From his prone position, bearing up under the buzzing needle, MacArthur says getting a tattoo from Talbot is surreal.

"It's definitely a fanboy moment," MacArthur says. "You grow up seeing the art that he did and then you get to have a piece of history on your arm."

MacArthur says he shared online with other fans that he was getting a tattoo from Talbot. He got a little teasing, he says. But every day he's in some online chat about the vintage Ninja Turtles comics — and also about life.

"[The Turtles] have really brought a lot of people together," MacArthur says. It makes sort of a motley crew of a family, if you will."

Fans have been cooing over Ninja Turtles art for more than 30 years, but after drawing them on paper for that long, Talbot began to lose interest in the work.

"I was kind of sitting in my basement with my dog, drawing turtles and not really seeing people," Talbot says. "I really got complacent with my style and what I was drawing. I wasn't really trying as hard."

Learning to tattoo, being with other artists, and getting outside his comfort zone has re-infused his creativity, Talbot says.

His first Donatello tattoo, not surprisingly, stands in a sort of defensive pose.

Pizza is the only thing Teenage Mutant Ninja Turtles seem to eat.

As he brushes away some extra ink from MacArthur's arm, Talbot says a few years ago, he would never have been able to touch anyone like this. The two of them are going to be seeing each other a lot in the next few months. After Donatello, there's still Leonardo, Rafael and Michelangelo left to ink.