Accessibility links
Fans, Well Wishers Say Final Goodbye To Kobe Bryant In Los Angeles Some 20,000 people got tickets to say farewell to NBA great Kobe Bryant and his daughter Gianna at the Staples Center in Los Angeles. People without tickets were being urged to watch at home. 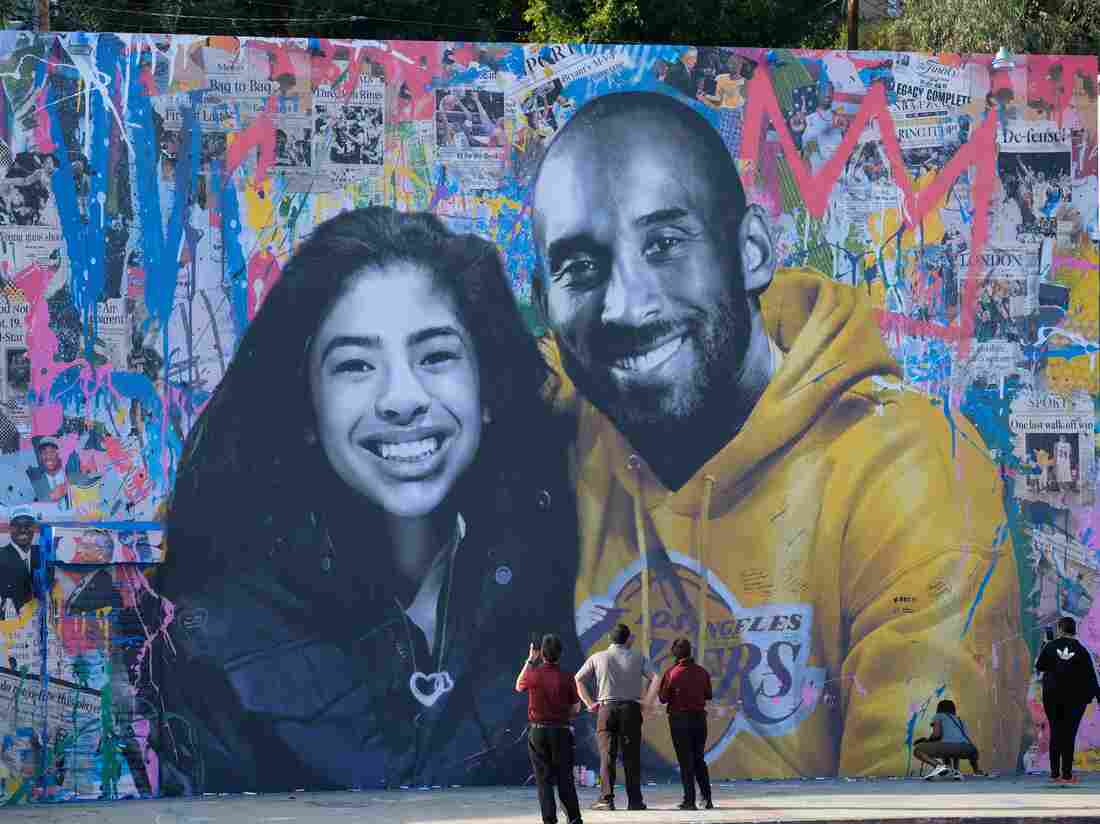 People stop to take pictures in front of a mural depicting Kobe Bryant and his daughter Gianna. They and seven other people were killed in a helicopter crash last month in Calabasas, Calif. Chris Delmas/AFP via Getty Images hide caption 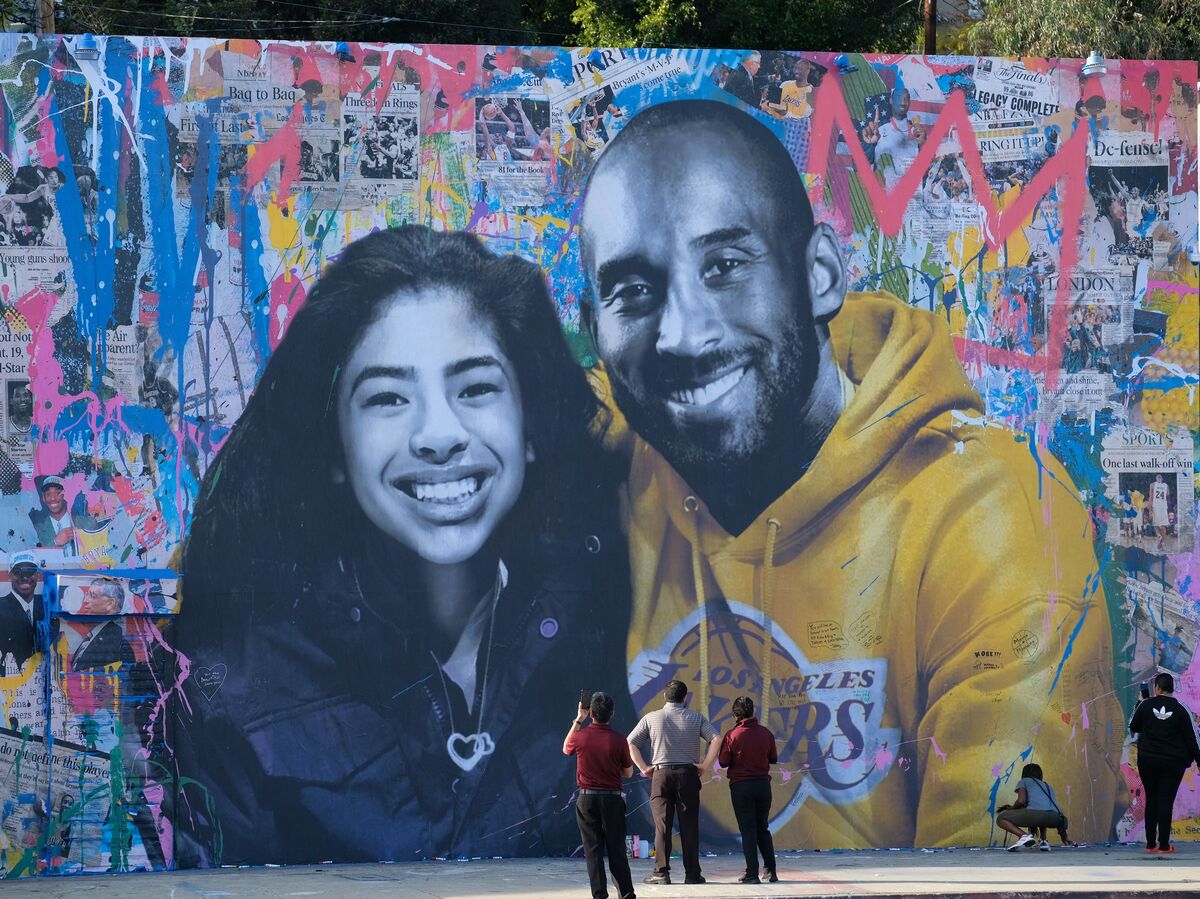 People stop to take pictures in front of a mural depicting Kobe Bryant and his daughter Gianna. They and seven other people were killed in a helicopter crash last month in Calabasas, Calif.

Some 20,000 mourners packed the Staples Center in Los Angeles on Monday for the public memorial honoring legendary former NBA player Kobe Bryant and his daughter Gianna, who were killed along with seven other people in a helicopter crash last month.

The star-studded ceremony opened with a powerful performance by Beyoncé singing her song "XO" which she said was one of Bryant's favorite songs and includes the lyrics: "In the darkest hour / I'll search through the crowd / Your face is all I can see / I'll give you everything."

At various points throughout the event, the crowd broke out in chants of "Kobe! Kobe!"

During his remarks, Kimmel told the crowd he found it difficult to find the positive in the tragedy that claimed the lives of nine people last month, acknowledging, "It was hard, because there isn't much."

But later he added: "The best thing I was able to come up with is this: gratitude. It seems to me that all we can do is be grateful for the time we had with them and for the time we have left with each other." 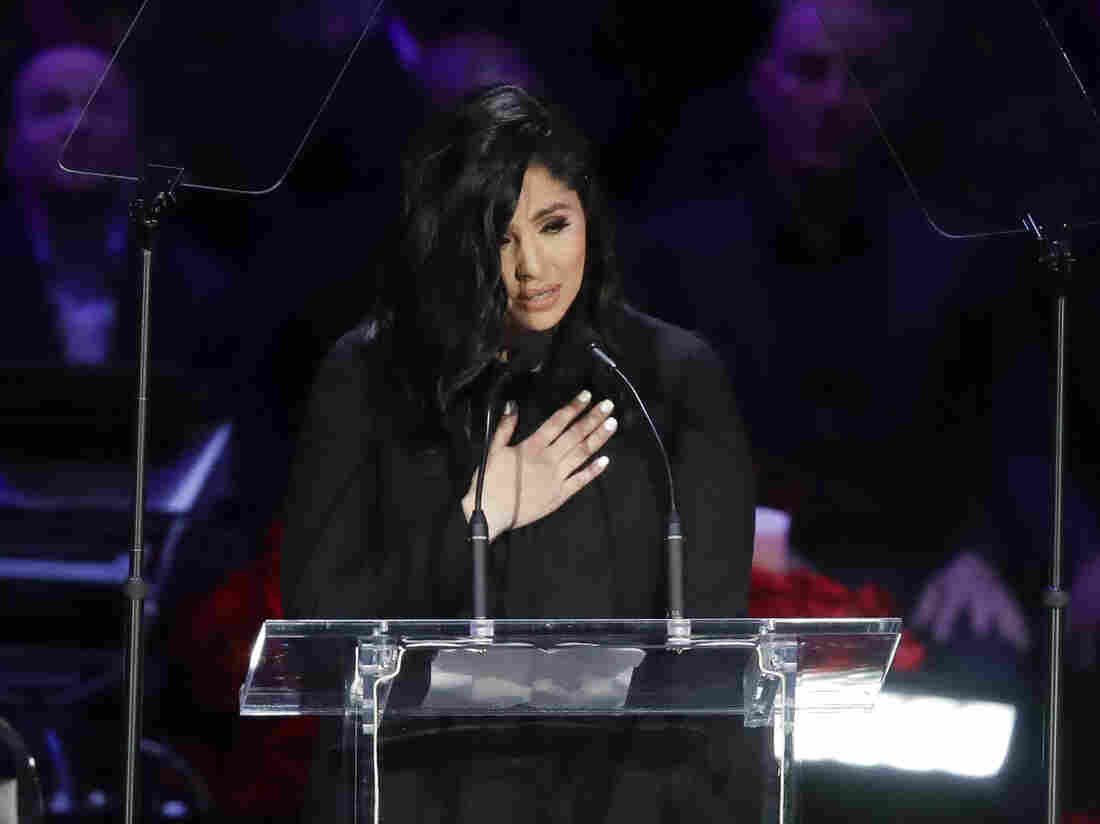 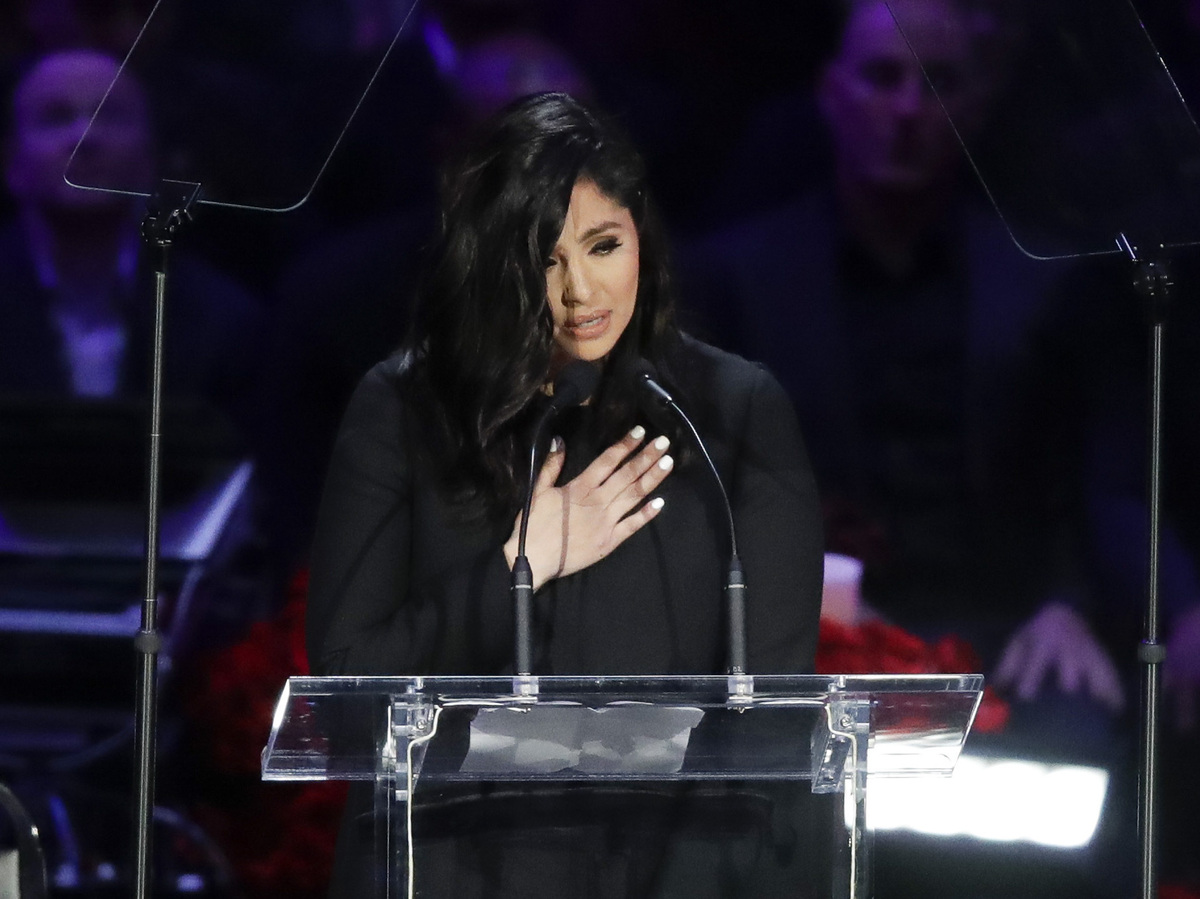 Vanessa Bryant speaks during a celebration of life for her husband Kobe Bryant and daughter Gianna at Staples Center.

Vanessa Bryant, Kobe's widow and the mother of Gianna, delivered her first public remarks since the accident.

Fighting back tears, she remembered first her "baby girl" Gigi, who would never leave the house without giving her a kiss goodbye. She said of her daughter, "she was daddy's girl, but I know she loved her mama."

Her mother told the Staples Center crowd that her daughter was more than just a tremendous athlete. She was also kind, an academic who was becoming fluent in Mandarin, and loved baking. Bryant shared an anecdote about the cake she made her father for his birthday last August, complete with fondant and what looked like blue crystals.

"Kobe's birthday cake looked like it was professionally decorated," her mother said, adding, "she made the best chocolate chip cookies, she loved watching cooking shows and Cupcake Wars with me and she loved watching Survivor and NBA games with her daddy."

At school, her mom said, Gigi helped offer to give the boys basketball coaches some pointers – like the triangle offense, an offensive strategy used by the Lakers during their back-to-back-to-back championships beginning in 2000.

Later she acknowledged things she wouldn't be able to do with her daughter.

"We didn't get the chance to teach her how to drive a car. I won't be able to tell her how gorgeous she looks on her wedding day," Bryant said.

Turning to her late husband, who she began dating at 17-years-old, she said she never viewed him as a celebrity. Instead, she rattled off the many nicknames they had for each other and remembered the gifts he made for her.

"We had hoped to grow old together," she said. "Two perfectly imperfect people making a beautiful family and raising our sweet amazing girls," Bryant said.

Bryant is survived by his wife, and three daughters Natalia, Bianka and Capri. 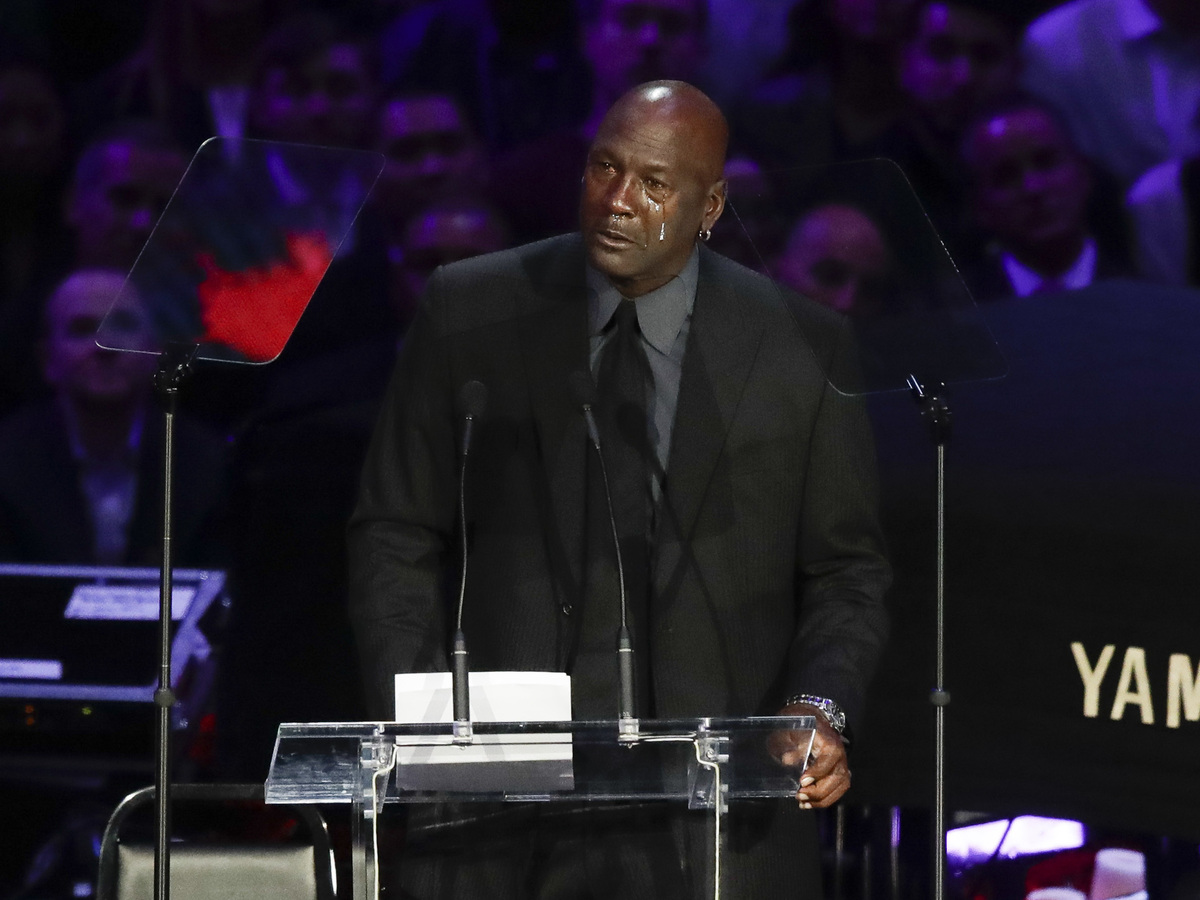 Former NBA player Michael Jordan cries while speaking during a celebration of life for Kobe Bryant and his daughter Gianna in Los Angeles.

During his remarks, Jordan, who many compare Kobe's game to, referred to Bryant as his little brother. Jordan shared stories about how Bryant would text, sometimes in the wee hours, to pick his brain about post-up moves or footwork. Over time the two grew close.

"To do that, you have to put up with the aggravation, the late night calls or the dumb questions," Jordan said jokingly.

The two basketball greats would talk basketball, of course, but also family, business and much more.

With tears streaming down his face, Jordan cracked another joke, this time about his famous "Crying Jordan" meme taken during his induction to the Basketball Hall Of Fame in 2009.

"Now I'll have to look at another crying meme..." Jordan said before the crowd erupted with laughter. "I promised my wife I wasn't going to do this because I didn't want to see that for the next three or four years."

"That is what Kobe Bryant does to me," he said.

The memorial's organizers and members of law enforcement urged fans wanting to pay their respects to the Bryant family to do so from afar if they don't have a ticket. The jumbo screens outside the arena were dark. Fans were encouraged to watch the memorial online or on TV, where it is being carried live by many news outlets.

"We kindly ask that all fans without a ticket to Monday's Celebration of Life for Kobe & Gianna Bryant to please stay home and watch with family and friends. The Celebration of Life will not be shown on screens outside of STAPLES Center or L.A. LIVE," the Staples Center tweeted on Sunday.

For those in attendance at the Staples Center — which some have dubbed "the house that Kobe built" — or watching from beyond the walls, the ceremony was infused with symbolism from the lives of the LA Lakers legend and his 13-year-old daughter, who was known as Gigi and was a budding basketball wunderkind in her own right.

We kindly ask that all fans without a ticket to Monday’s Celebration of Life for Kobe & Gianna Bryant to please stay home and watch with family and friends. The Celebration of Life will not be shown on screens outside of STAPLES Center or L.A. LIVE. pic.twitter.com/9301e5luHG

Even the ticket prices, for those who could get them, had connections to those jersey numbers, according to the Los Angeles Times. Some tickets were going for "$24.02, two for $224 or $224 each." 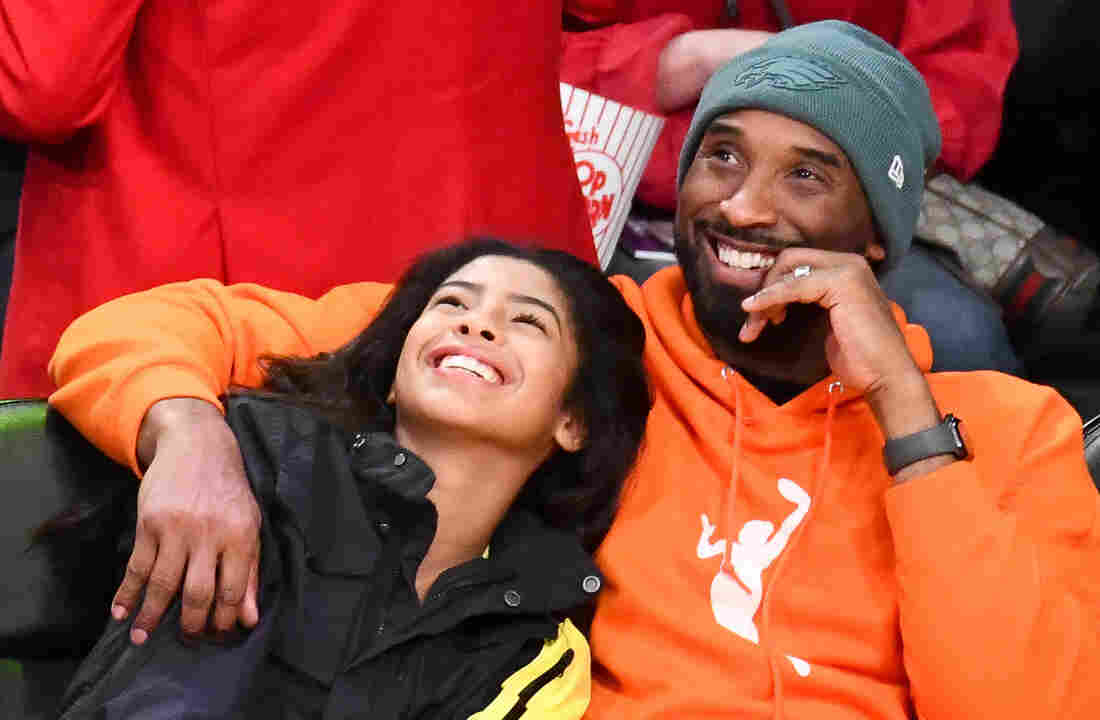 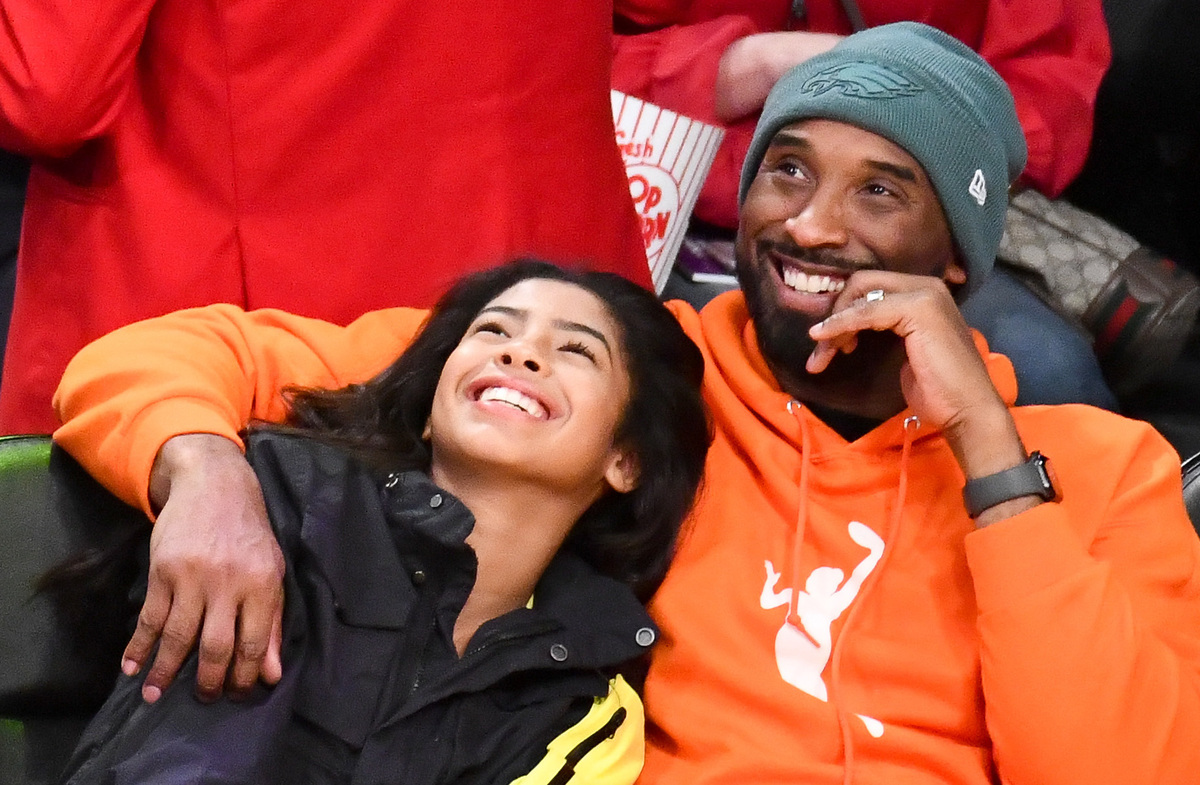 Not all who applied got in

ESPN reports that 80,000 people applied for tickets. Proceeds will go to the Mamba & Mambacita Sports Foundation which raises money to provide sports education and training services for young women. The foundation was originally established as the Mamba Sports Academy, but Bryant's widow announced that the name was changed to honor their daughter.

Kobe Bryant gave himself the moniker "Black Mamba" after a character in the Quentin Tarantino film Kill Bill. 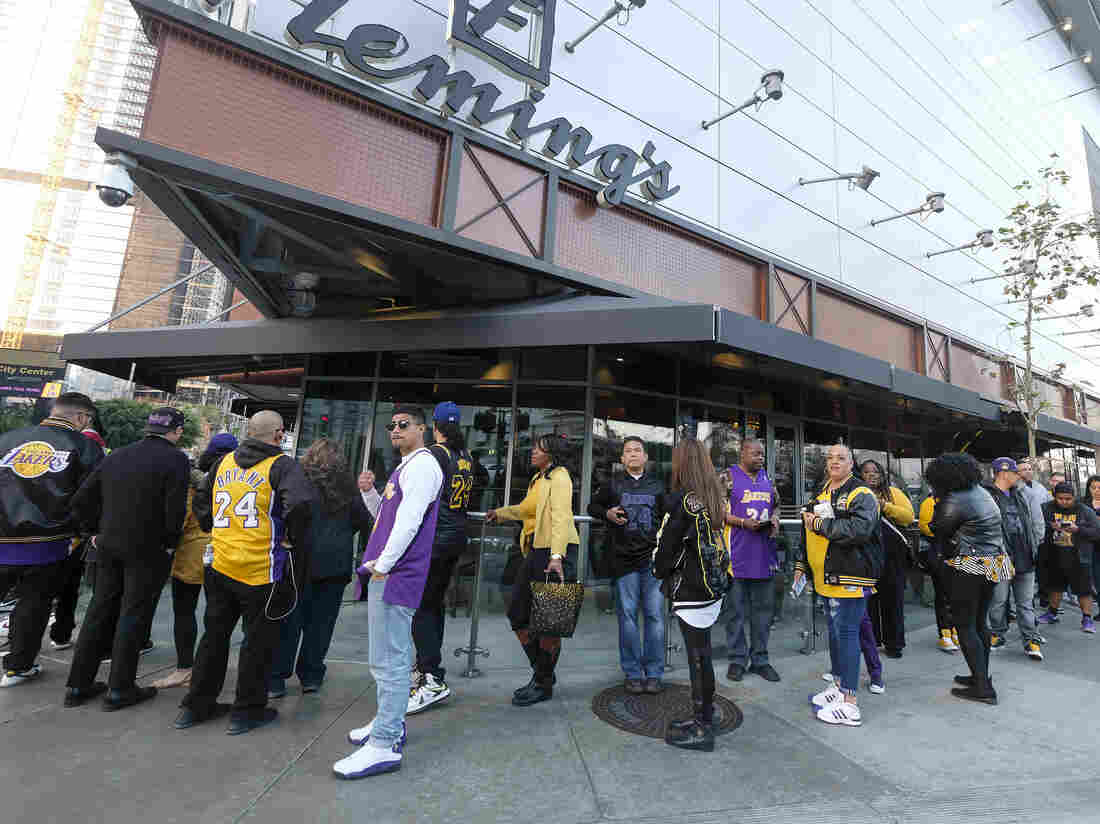 Fans line up to get into the Staples Center to attend a public memorial for former Los Angeles Lakers star Kobe Bryant and his daughter, Gianna, in Los Angeles. Ringo H.W. Chiu/AP hide caption 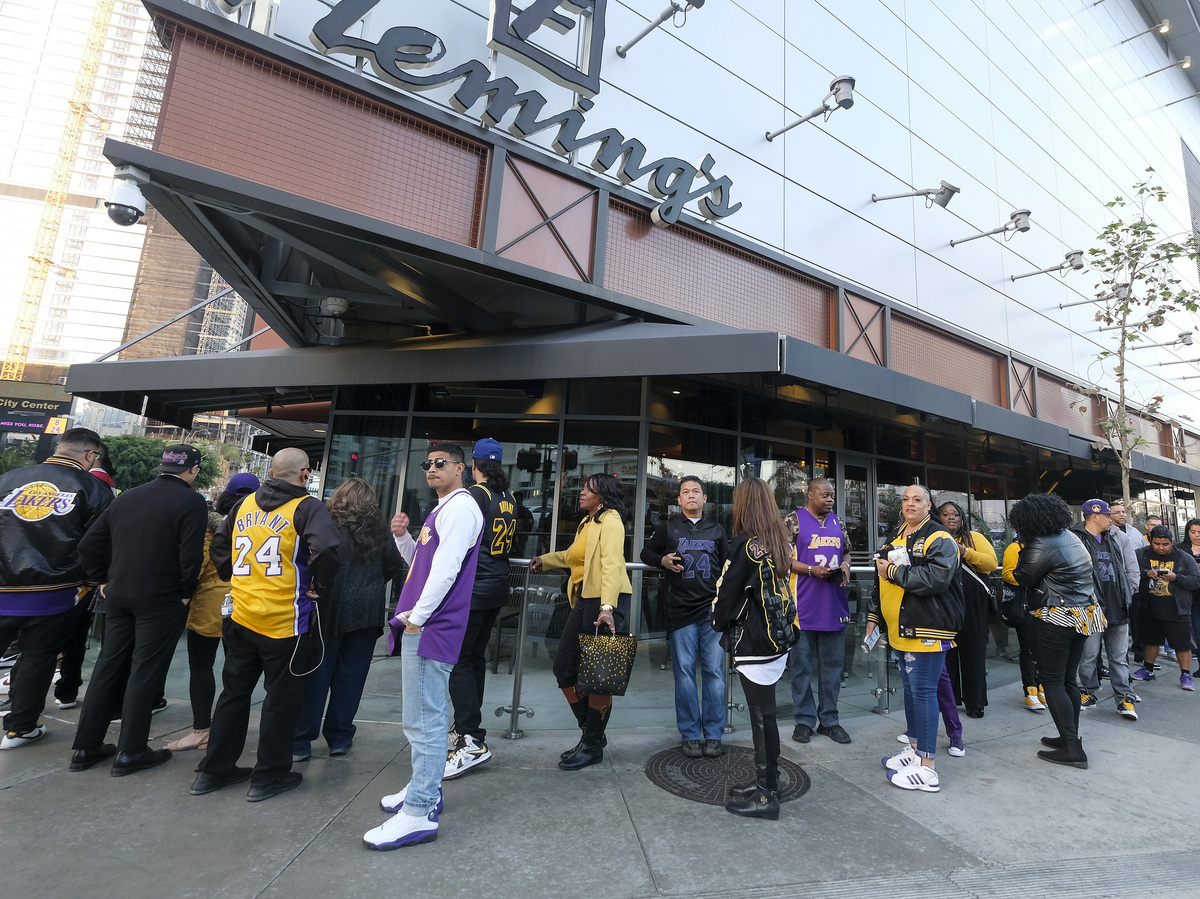 Fans line up to get into the Staples Center to attend a public memorial for former Los Angeles Lakers star Kobe Bryant and his daughter, Gianna, in Los Angeles.

Bryant and his daughter were traveling to Gigi's basketball game in a Sikorsky S-76B helicopter, when it crashed into a hillside in Calabasas, Calif., on Jan. 26. All eight passengers and the pilot were killed.

The Bryants were laid to rest in a private ceremony in Southern California on Feb. 7.

Along with Bryant and his daughter, the other seven victims of the crash were Orange Coast College baseball coach John Altobelli, 56, his wife Keri Altobelli, 46, and their daughter Alyssa Altobelli, 14; Sarah Chester, 45, and her daughter Payton Chester, 13; as well as Mamba Sports Academy coach Christina Mauser, 38; and pilot Ara Zobayan, 50.

Before the public ceremony got underway, the Los Angeles Times reported Vanessa Bryant has filed a lawsuit against Island Express Helicopters, the company that operated the chopper. NPR later confirmed the lawsuit with the Los Angeles Superior Court.

Investigators are still working to determine the cause of the crash. The National Transportation Safety Board said in its investigative update this month that the chopper's rotors were both powered and turning at the time of impact, which it said indicates "the engines showed no evidences of uncontained or catastrophic internal failure."

Photos taken shortly after the crash show conditions were foggy in the hills above Calabasas, but as NPR's Russell Lewis has reported, the final investigative findings are not expected for at least a year.

NTSB: Kobe Bryant Helicopter Engine Did Not Fail Before Crash

Bryant, with his rare mix of speed, agility and an elite level of competitiveness, is considered one of the best to ever play the sport of basketball.

He was drafted into the NBA straight out of high school at age 17. He spent his entire pro career with the Lakers, helping power the team to three consecutive NBA titles along with another all-time great, Shaquille O'Neal, in 2000, 2001 and 2002.

His career is not without controversy, however. In 2003, a 19-year-old woman accused the basketball star of rape. The criminal case ended in 2004 after the woman refused to participate in trial. The parties settled a civil lawsuit out of court in 2005, with Bryant issuing an apology but not an admission of guilt.