Accessibility links
At 25 Years, Understanding The Longevity Of Craigslist While other sites keep updating, Craigslist just looks old. "It's like a shark that's never had to evolve," says Jessa Lingel, who's written about the history of Craigslist. 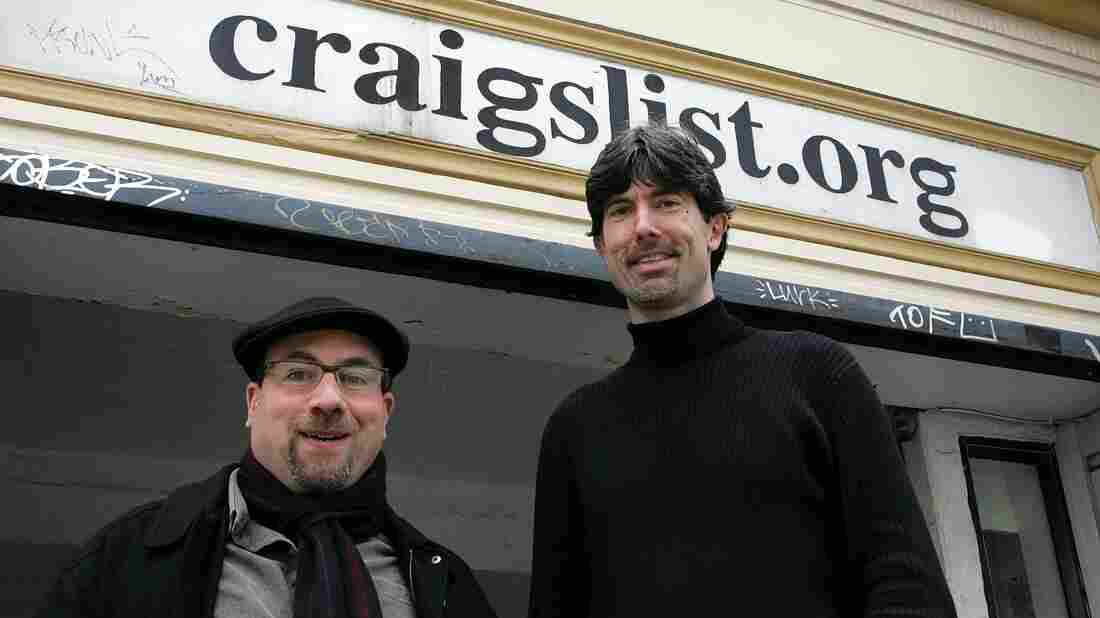 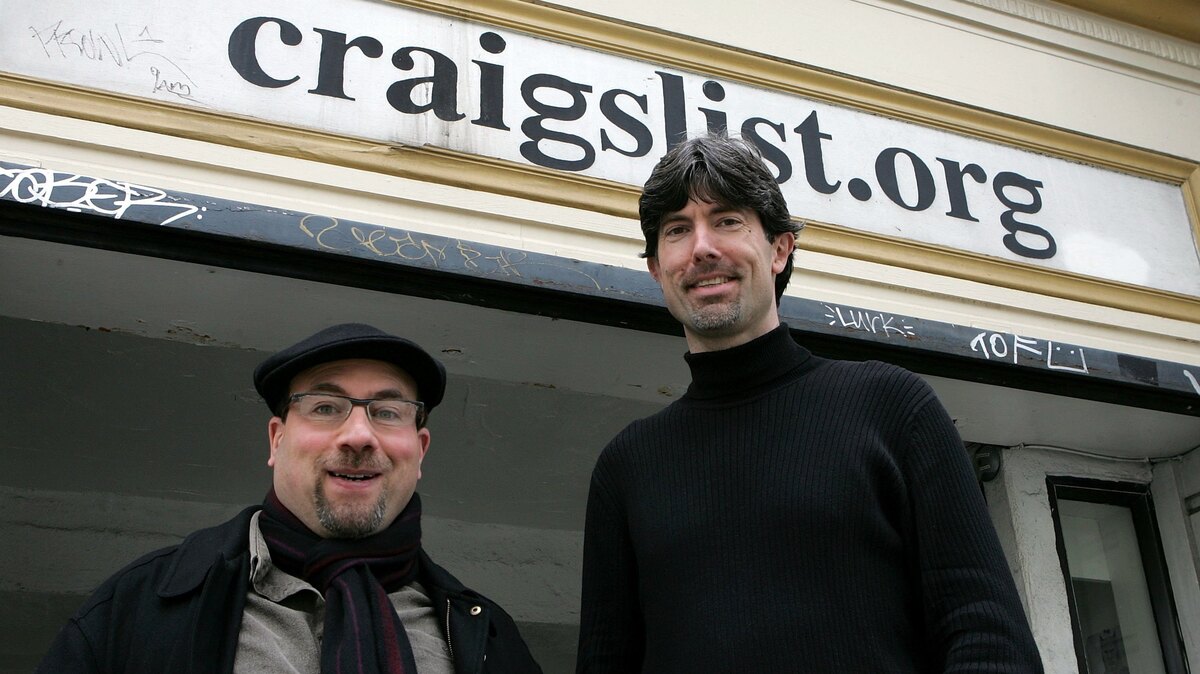 Craigslist founder Craig Newmark (L) and CEO Jim Buckmaster pose in front of the Craigslist office March 21, 2006 in San Francisco. The site has become a behemoth but changed little aesthetically.

Craigslist is a bit of an anomaly on the rapidly changing Internet. While other sites are constantly tweaking, testing new designs, finding new ways to gather data, Craigslist is remarkable for its stability.

A typical city's page looks roughly the same today as it did 15 years ago.

"It's like a shark that's never had to evolve," says Jessa Lingel, who's written about the history of Craigslist for the website The Conversation and also in the book, An Internet for the People: The Politics and Promise of craigslist.

While maintaining an old-school look, Craigslist has since grown to the behemoth of today, with billions of page views a month and an estimated revenue (according to one consulting group) of more than $1 billion in 2018.

The site was founded by Craig Newmark, who started it as an email list to friends about happenings in the San Francisco Bay Area in 1995. Jim Buckmaster, Craigslist's CEO, has been in his job for two decades.

"They're both just old-school engineer type guys who just really believe in keeping the design as simple and functional as possible," Lingel says. "[I]t's never had a competitor that was really able to swallow up its user base. It's had loyal customers all along, loyal users all along, so it's just never been forced to adapt."

Craigslist doesn't run banner ads, and according to Lingel, it doesn't sell user data to third parties. It makes money by charging a small number of users to post ads.

"Ads like job postings, real estate ads, if you're like a car dealer, furniture dealer, you have to pay a small amount of money, we're talking like $5 to $25 — and that's this entire revenue stream," Lingel says.

But for most people, it's totally free. It's become the biggest market for classified ads on the Internet.

Craigslist is also different for being anonymous. Authorities accused the site of facilitating prostitution; it dropped its longtime "personals" section in the U.S. two years ago after Congress passed the Fight Online Sex Trafficking Act, which aimed to crack down on child sex trafficking. Reports through the years describe Craigslist's role in helping accused killers, rapists, robbers and scammers find their victims.

As Craigslist celebrates 25 years this year, NPR's Mary Louise Kelly spoke to Lingel, who is also an assistant professor of communication at the University of Pennsylvania, about how the site has managed to keep on keeping on.

On Craigslist users posting anonymously, contrary to sites such as Facebook

That policy goes back to Craigslist's early days in the 1990s when it was very common to be anonymous online or pseudonymous, you know, using pseudonyms or fake names. And just like they haven't changed their appearance, they have never let go of that policy. And they see that policy as providing a form of protection and privacy to their users.

So it is true that there have been some, you know, very violent crimes. There's been scams on Craigslist. But of course, there are also scams on platforms that we think of as much classier or much safer. There's scams on LinkedIn, on eBay, on Facebook. So it isn't so much that the anonymity means that crime happens. It just means that we have a policy to blame. So we do tend to blame the platform more when we can't point at individual users because we don't know anything about them.

I heard over and over again this sense that Craigslist is part of the poor people's Internet. And what participants and people I interviewed meant by that was that Craigslist sort of has this stigma that using it means you're lower class, using it means you're sort of hard up. But it also meant that people of color, poor people, found that they could use the site in a way that really made sense for them.

So on a platform like Airbnb, for example, if you're trying to get a rental, people can discriminate against you based on how you look. We actually know for a fact that there have been these high-profile incidents on Airbnb of hosts discriminating against guests because of their name or what they look like.

So suddenly on a site like Craigslist, you can rent an apartment, you can try and search for a job. And you don't have to worry about people discriminating against you because you're anonymous.

On Craigslist and the future of the Internet

I've been studying digital culture for about 10 years and I've always been interested in platforms that are sort of outside the mainstream. And one thing that really interests me about Craigslist is that it's been online for so long, and it hasn't had to change its politics. So Craigslist holds onto these early 1990s Web values about a platform being truly accessible, the platform being open and a platform that doesn't change its appearance. And in that sense, Craigslist reminds us there's a path that a company can take, and it can feel democratic and it can feel less commercial and still be incredibly successful. You know, you don't have to sacrifice your profits in order to protect user data.

NPR's Elena Burnett and Emily Kopp produced and edited the audio version of this story.