Accessibility links
MVP Pitcher Madison Bumgarner Has A Secret Life — As A Champion Cattle-Roper The left-handed pitching ace has been entering — and sometimes winning — rodeo events under the alias "Mason Saunders." 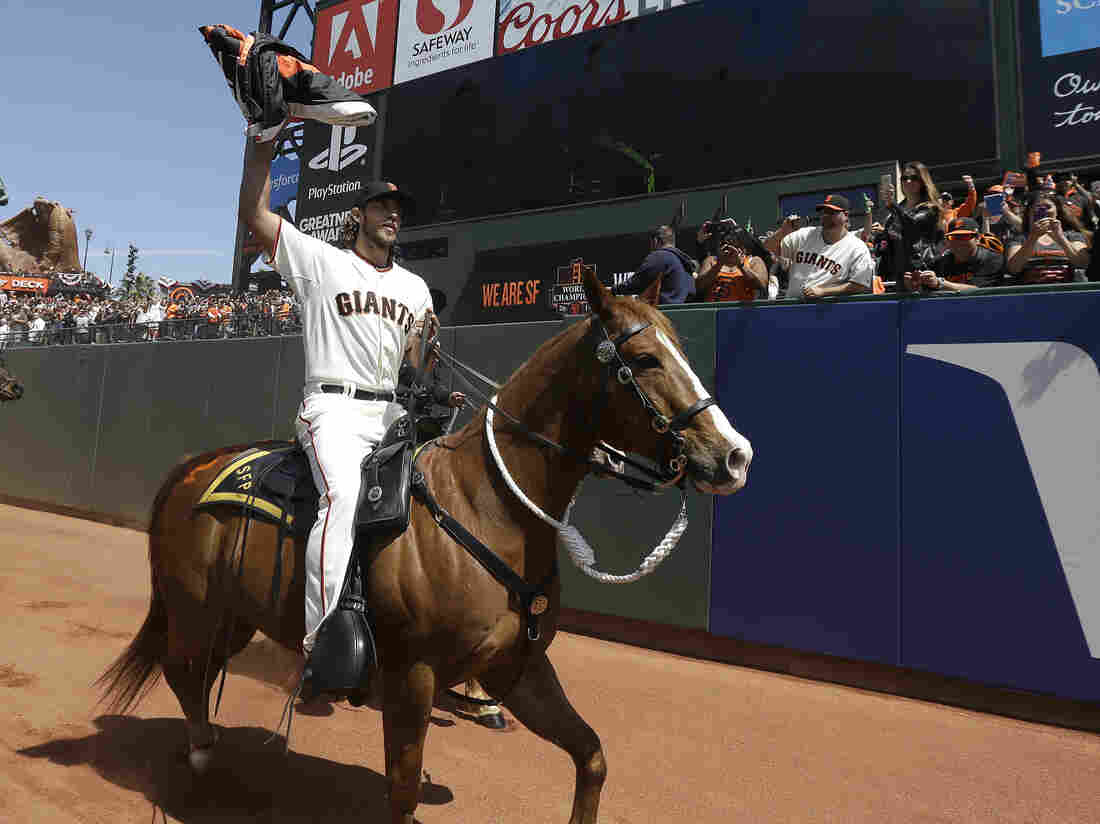 Major league pitcher Madison Bumgarner carries the 2014 San Francisco Giants championship pennant while riding a police horse before a game in 2015. The Athletic reports that Bumgarner has been competing at rodeos under an alias. Jeff Chiu/AP hide caption 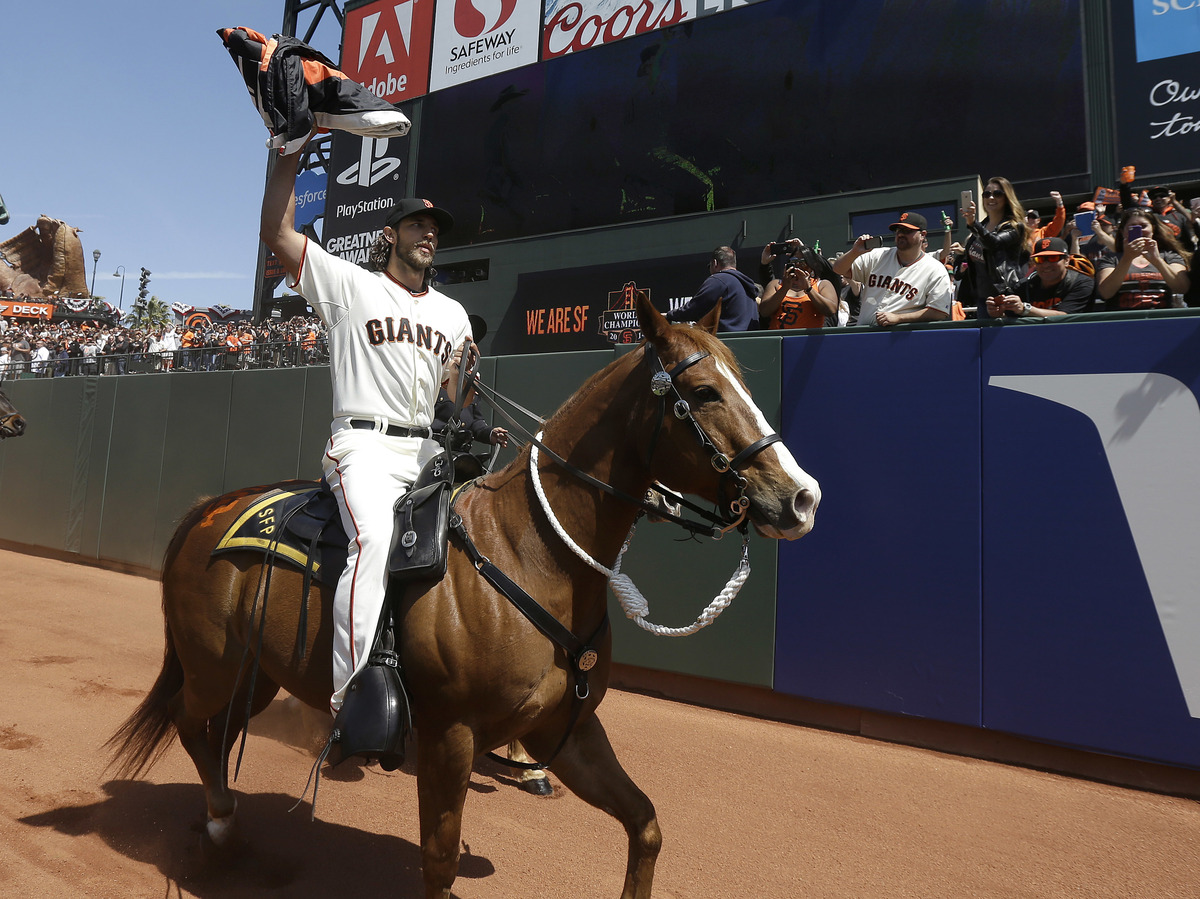 Major league pitcher Madison Bumgarner carries the 2014 San Francisco Giants championship pennant while riding a police horse before a game in 2015. The Athletic reports that Bumgarner has been competing at rodeos under an alias.

Major League Baseball's opening day is a little more than a month off. But one of the boys of summer has been cross-training in the off season — by roping cattle. Professionally. Under an alias.

Madison Bumgarner, the left-handed pitching ace who was 2014 World Series MVP with the San Francisco Giants, has been entering — and sometimes winning — rodeo events under the name Mason Saunders.

The delightful revelation was reported Sunday by The Athletic, in the rare instance of investigative reporting unearthing evidence that the world is secretly better than we knew.

It turns out the news was hiding in plain sight if you knew where to look — on the Facebook page of Rancho Rio, "Arizona's premier equine facility," which hosts a plethora of cattle roping competitions northwest of Phoenix. One such event is team roping, in which one horseback rider ropes the front end of a steer while a second rider ropes the hind.

"Jaxson Tucker & Mason Saunders took home the biggest paycheck of the day topping the #12.5 Big Gamble," the arena posted in early December. "The duo roped four steers in 31.36 seconds to pocket $26,560 in CASH!"

Rancho Rio's post included a couple of photos of the champs: an action shot of the men roping a steer, and a photo of the two after their win. The taller of the pair, with his thumbs hooked into his jeans, bore a striking resemblance to a certain ballplayer.

"Oh boy," Bumgarner told Athletic reporters Andrew Baggarly and Zach Buchanan when they asked him about the photo. "This is ruining my alias." But they say he was smiling when he said he told them, "I'm upset with both you two."

In any event, Bumgarner probably wasn't roping for the cash. About two weeks after Rio Rancho (where "Saunders" took second place in an event a few days later), the Arizona Diamondbacks signed him to a five-year, $85 million contract, the second-largest deal in club history.

Bumgarner, who has been roping since he was a teenager in North Carolina, told the site that the alias was a way to keep a low profile at rodeo events. He explained that "Mason" is a shortened version of his first name, while "Saunders" is his wife's maiden name.

Bumgarner was a free agent at the time of the December event, but he also reportedly competed in an event in March while still under contract with the Giants.

His new boss, Diamondbacks General Manager Mike Hazen, said Monday that he was unaware of his new pitcher's rodeo exploits. But the GM says he doesn't tell players what they can and can't do in their own time.

"Madison is a grown man and we know he's committed to helping us achieve our goals as a team," Hazen told the Arizona Republic. "Those have been the conversations that we've had, from the time we first talked to him until very recently."

Meanwhile Bruce Bochy, Bumgarner's former manager at the Giants, was wowed by the revelations.

"It's pretty impressive how he hid this. And he won, right? I mean, jeez. That's even more impressive," Bochy said, according to MLB.com.

But he also guessed that the news might put an end to the pitcher's side hustle.

"I've got to think that's the end of him being on the rodeo circuit," Bochy said. "I can't wait to talk to him about it. I've got some stories about him, some things that he's done, but this one tops all of them."