Accessibility links
Mubarak, Egypt's Ousted President, Is Dead At 91 For many Egyptians, Mubarak became the symbol of all that was wrong with their country. His nearly 30-year rule is recalled as a time of repression and economic stagnation for all but an elite few. 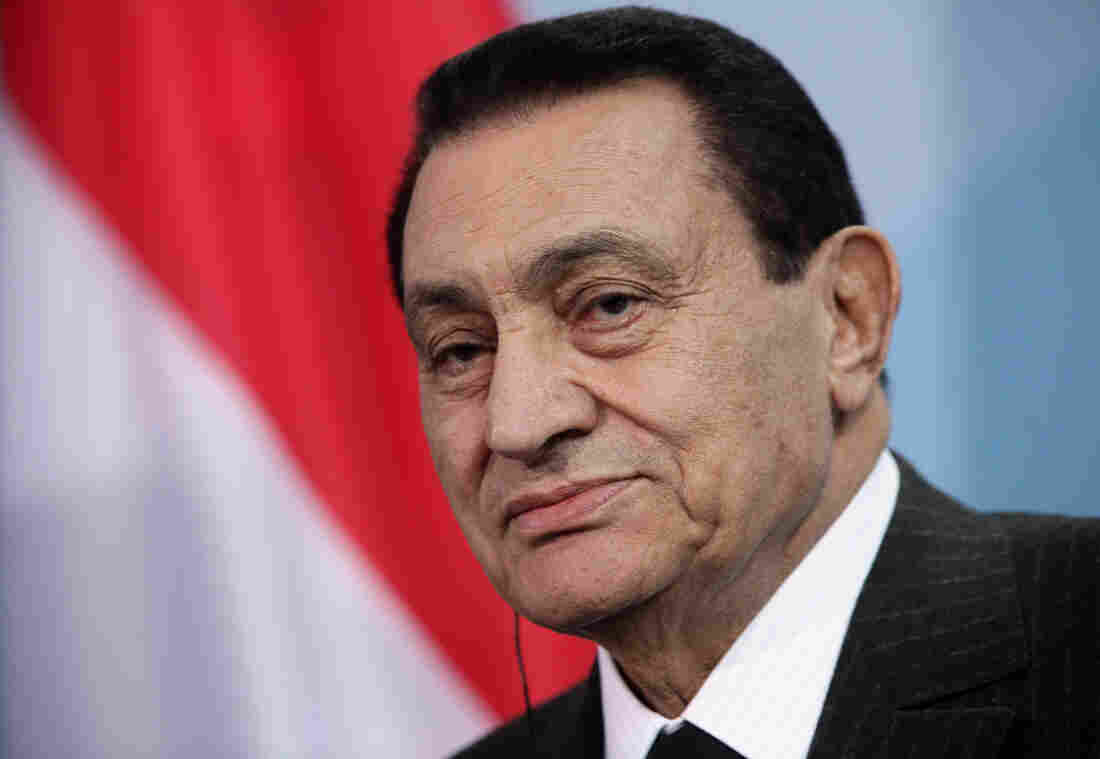 Hosni Mubarak speaks to the media during a trip to Berlin in 2010. Sean Gallup/Getty Images hide caption 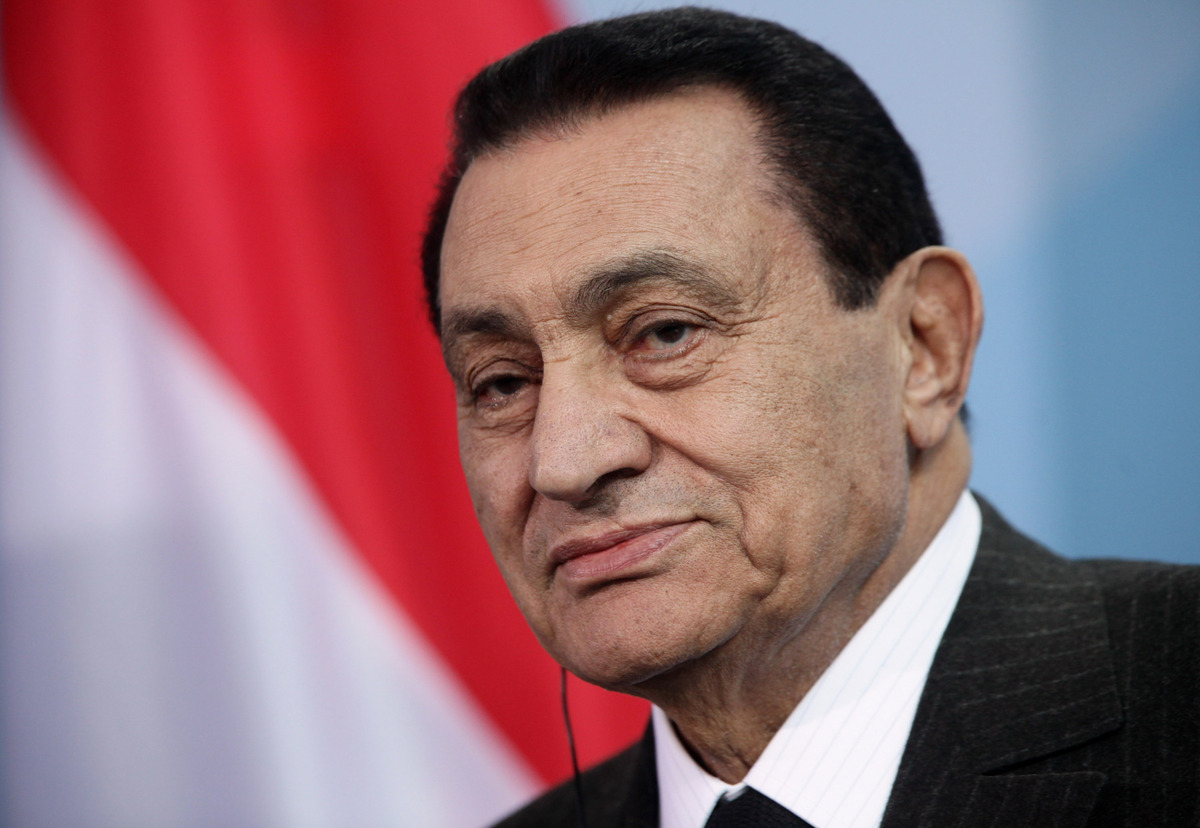 Hosni Mubarak speaks to the media during a trip to Berlin in 2010.

Former Egyptian President Hosni Mubarak, who was ousted from power in the early days of the Arab Spring, has died at the age of 91.

Egypt's government has announced three days of public mourning for Mubarak, who is to be buried in a military funeral.

A statement from the Egyptian presidency said it "mourns with great sorrow" Mubarak's death in light of his role as a hero of the 1973 Arab-Israeli War, which it said "restored dignity and pride" among Arab nations.

Mubarak was an air force officer during the war in which Egyptian-led troops captured the Suez Canal. The parliament and military command expressed their condolences for the death of a leader of the "glorious October War."

Israeli Prime Minister Benjamin Netanyahu also mourned Mubarak. "In the name of the citizens of Israel and the Israeli government, I would like to express deep sorrow on the death of President Hosni Mubarak," he said in a statement Tuesday. "President Mubarak, a personal friend of mine, was a leader who led his people to peace and security, to peace with Israel."

But for many Egyptians, Mubarak became the symbol of all that was wrong with their country. His nearly three-decade rule is recalled as a time of political repression, widespread corruption and economic stagnation for everyone but an elite few.

Many Egyptians who took to the streets in early 2011 seeking his ouster hadn't even been born yet when the former military pilot first became president.

"My grandmother is exactly the same age as Hosni Mubarak, and I always think of her running the country, of her meeting my needs and my demands," said 28-year-old Nazly Hussein. "It's impossible. He was really out of touch with people's demands, people's aspirations. He did not meet any of them."

The disconnect between the Egyptian people and their longest-serving leader since the 19th century grew over time. Yet as lengthy as his tenure was, Mubarak's legacy is uninspiring compared with that of his predecessor, Anwar Sadat, who plucked him from the ranks of the Egyptian air force and made him vice president.

Sadat stunned the Arab world by signing a historic peace accord with Israel. But such boldness only reinforced Mubarak's caution, especially after Sadat was assassinated on Oct. 6, 1981. After stun grenades had been tossed at the platform where Sadat stood, soldiers from the top of the truck opened fire. Islamist assassins, enraged by Sadat's recognition of the Jewish state, shot the president before Mubarak's eyes as the men watched a military parade.

The attack, which also wounded Mubarak, helped shape his agenda as the new president. He made security an absolute priority, arresting and imprisoning Islamists and their supporters across the country.

Analyst Diaa Rashwan said people forget that many Egyptians were happy when Mubarak took office. They supported his tough stance on Islamists, who in the 1990s launched a campaign of attacks on government officials and foreign tourists.

"When Hosni Mubarak came, he came under very difficult conditions," Rashwan said. "A president was assassinated, and he succeeded to have his legitimacy from mainly the Egyptian establishment — from the Egyptian army, and also from his first measures."

Mubarak released some of the more secular prisoners arrested by Sadat. He transformed Egypt into a market economy, opening up the country to badly needed loans and foreign investors. The new president also spoke of political reform, promising to serve only two six-year terms.

But Mubarak broke that promise when he ran for a third term in 1993. Six years later, he ran for a fourth term. Arbitrary arrests and other civil rights abuses were rampant as he continued his crackdown against the Islamists. Eventually, U.S. administrations began to pressure the Egyptian leader, finding that his support of Israel and stance against terrorism did not mitigate his human-rights abuses at home.

In 2005, Mubarak declared that Egypt's constitution would be amended to allow for the country's first multicandidate presidential election. But that only stirred up more Egyptian protests. Participants campaigned explicitly against Mubarak for the first time, shouting, "kifaya," the Arabic word for "enough."

The fifth term in office

Nevertheless, Mubarak, at age 77, ran for a fifth term with a slick and expensive political campaign organized by his powerful younger son, Gamal.

"I would never, ever let Egypt down, and for their sake I announce that I am determined to be nominating myself in the coming presidential elections," the elder Mubarak said, speaking through a translator.

Despite earlier promises of more openness, observers say the 2005 election was marred by widespread fraud and intimidation. Not surprisingly, Mubarak cruised to an easy victory and pledged economic and social reforms. Yet analyst Mohammed Said said that by this point, Egyptians didn't expect any follow-through.

"We have rampant corruption; we have a society that is totally alienated," he said. "The infrastructure, the institutional infrastructure of the country is totally fake and imposed from above.

"So I would say that, well, unfortunately he was never really a philosophe, but he was not even really the kind of wise man he could have been if he had continued the way he started his first tenure in office."

In their desperation, more Egyptians began listening to the arguments of the Muslim Brotherhood, which was emphasizing its anti-corruption platform. Joblessness was also a growing problem. The most popular jobs for young Egyptian men who didn't emigrate were with the security forces, which operated with impunity.

In a 2008 documentary aired by the Al-Jazeera network, analyst Osama Harb noted that in a country of 70 million people, there was a policeman for roughly every 40 Egyptians.

Weeks after the revolution in nearby Tunisia in January 2011, Egyptians took their frustrations to the streets and confronted the security forces. Nearly 900 protesters were killed before the police fled their posts. The dreaded state security force that was pivotal in Mubarak's campaign to quash his enemies was ultimately disbanded.

Mubarak tried offering concessions. He appointed intelligence chief Omar Suleiman as his first-ever vice president. He also promised not to stand for reelection or to promote Gamal for the office.

But the protesters wouldn't relent. They wanted Mubarak gone, and under pressure from them and the military from which he came, he resigned on Feb. 11, 2011.

In August, the ousted leader went on trial, facing charges of conspiracy for ordering the killing of anti-government protesters. Mubarak's nine co-defendants included his two sons, former Interior Minister Habib el-Adly and six top former police officials. After a 10-month proceeding, on June 2, 2012, the former Egyptian president was convicted of having a role in those deaths and sentenced to life in prison.

"Sadat in some ways had acquired a certain charisma precisely because he did have big ideas," Roberts said. "And I think in a way that if Mubarak drew a lesson from Sadat's experience, it was that it's safer not to have big ambitions in terms of shaking things up."

But protester Hussein said she'll also remember the former leader for uniting Egyptians to fight for their rights.

"Had it not been for Hosni Mubarak's presence, people would not have been united," she said. "And by the end of the day, it was really obvious that these people were not going to go home until they bring him down."