Accessibility links
Coronavirus Outbreak Slows Shipping To U.S. And Farm Exports Suffer Fewer ships from China are docking in the U.S., which hurts U.S. farmers who send exports on the ships' return trips. And perishables that do make it sometimes rot on the docks in China. 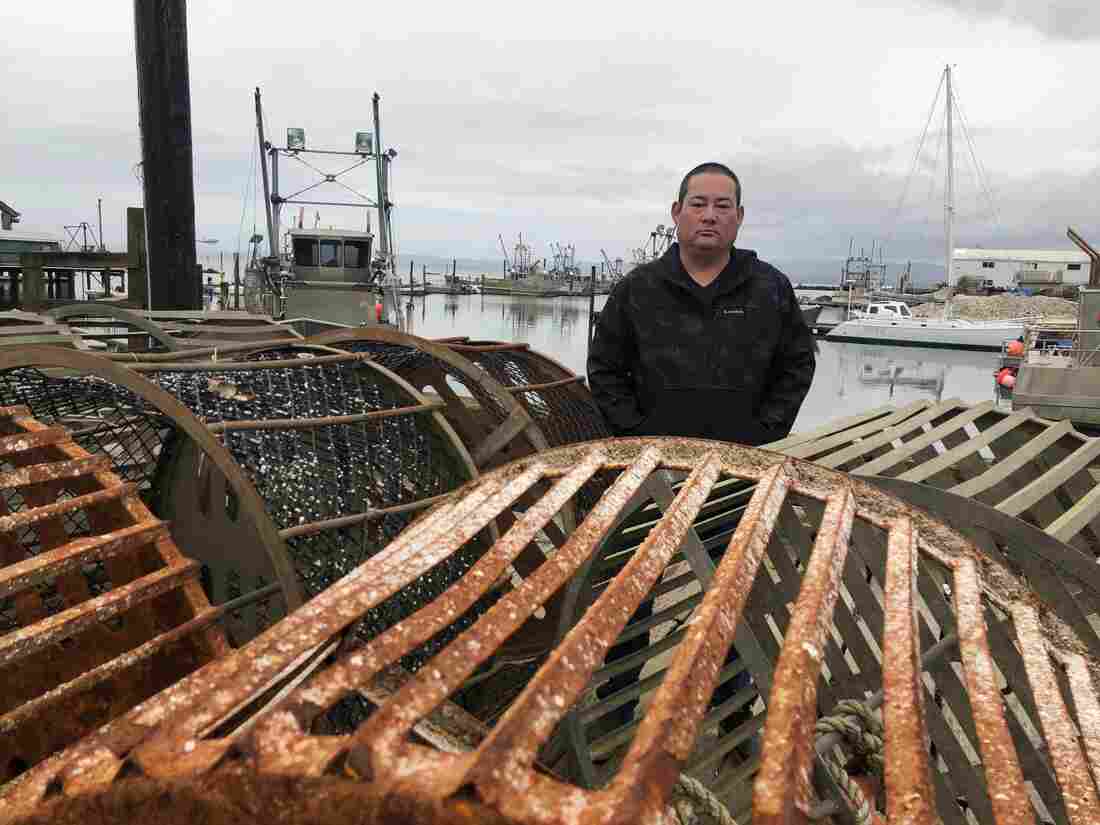 Kenichi Wiegardt is a fifth-generation oyster grower. He's worried he'll be the last in his family if the coronavirus doesn't get better and trade doesn't pick up again to China and other Pacific Rim countries. Exports there make up the majority of his fresh-oyster packing business. Anna King/Northwest News Network hide caption 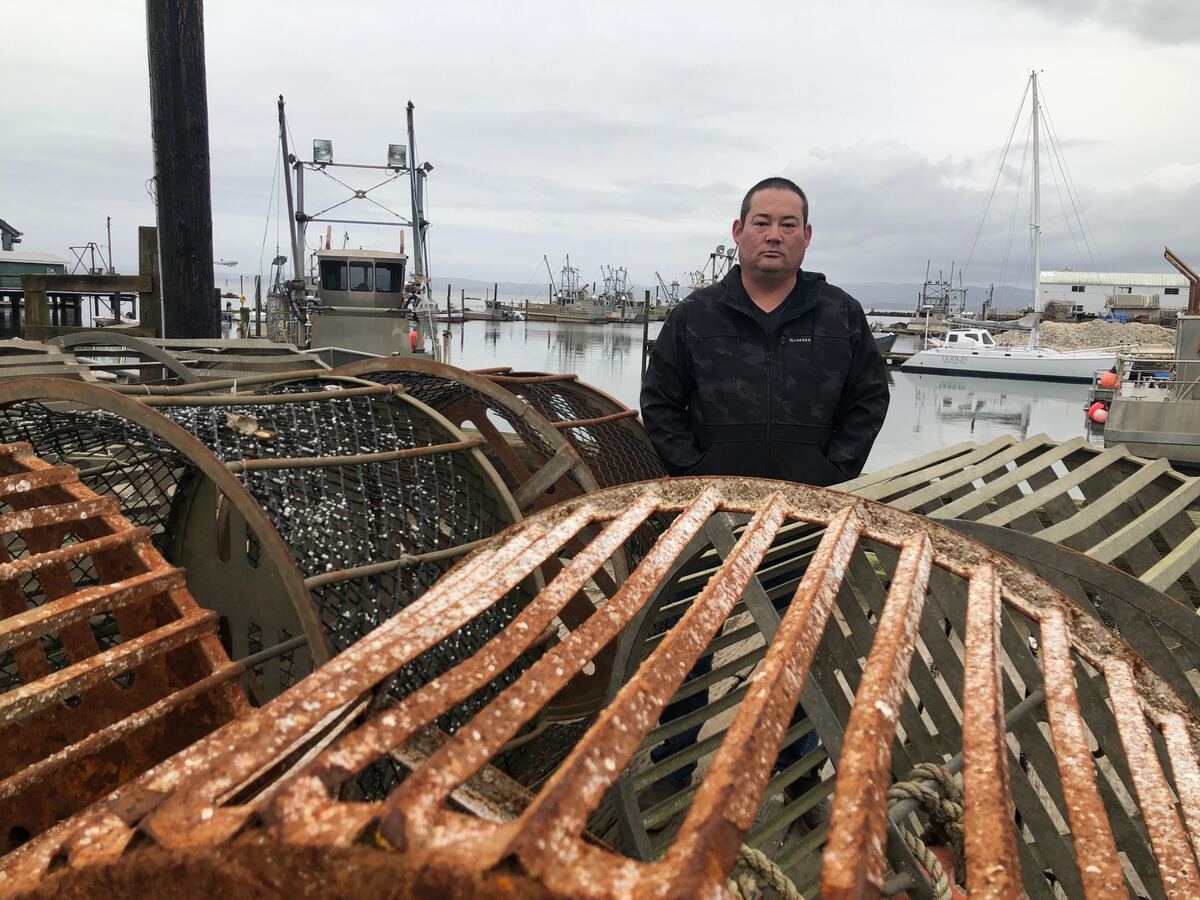 Kenichi Wiegardt is a fifth-generation oyster grower. He's worried he'll be the last in his family if the coronavirus doesn't get better and trade doesn't pick up again to China and other Pacific Rim countries. Exports there make up the majority of his fresh-oyster packing business.

Kenichi Wiegardt can really shuck oysters. His hands work at a dizzying pace opening the shells, a rhythmic thump, thump, crack, slice. Then oyster meat blurps into a strainer over and over.

Wiegardt, a fifth-generation oysterman, makes his living in the mud of Willapa Bay on Washington's coast.

Right now, all sorts of products aren't reaching the U.S. because of the coronavirus outbreak that originated in Wuhan, China, officially called COVID-19. Reciprocally, many U.S. agricultural and forestry products aren't shipping back into China and other Pacific Rim countries. Global trade watchers say backed-up trade is building up on both sides of the Pacific Ocean.

Wiegardt says he usually ships about eight pallets stuffed with freshly-jarred oysters to Hong Kong every Monday. Now, he's down to shipping as little as one.

Some of his 19 shuckers have worked for him for decades. He's had to cut back their hours, or pay them less for cleanup tasks. He's stoic, but his mouth quivers a bit when talking about what could come next.

"I'm frustrated and scared to death," he says. "But at the end of the day there are people out there that are suffering, they're sick and there's people dying."

Despite its concentration in Hubei province in the city of Wuhan, nearly 600 miles north, coronavirus means people in Hong Kong aren't going out to eat and they aren't buying many oysters.

Most of Wiegardt's business is built on exports, and even his domestic and Canadian Chinatown business is suffering. His orders have more than halved from places like San Francisco, Los Angeles and Toronto, Canada. He says, it has to turn around soon.

Wiegardt says he desperately doesn't want to be the last member of his family to carry on this business.

"I want it to be there for (my children) if it's something they want to do," Wiegardt says. "My youngest has definitely shown a lot of interest already, and he's only nine years old, so ... fingers crossed!"

Three hours away at the Port of Tacoma, forklift-like machines called straddle carriers or "strads" zip back and forth at a terminal. They look like something out of Star Wars. They create a chorus of beeps as they ferry large metal containers off a massive vessel.

It's not just oysters being held up. Geoduck clam and Dungeness crab operations are also in deep trouble on the Northwest coast. Winter is their prime harvest time. And other U.S. agricultural and forestry products are suffering too.

Because of coronavirus, there's a dearth of manufacturing and shipping — on air freight and on seagoing vessels. That means there are fewer products coming into U.S. ports. There are also fewer containers to ship back.

Tong Zhu is one of the top people in charge of marine shipping operations at the ports of Tacoma and Seattle, called the Northwest Seaport Alliance.

"So we have seen a pretty steep drop in January in terms of our volume," Zhu says. "And I worry that that pattern will continue through February and March. How soon things will resume to normalcy and how soon the coronavirus can be fully contained is difficult to say."

She says China has clamped down on who can work, and movement is restricted in many provinces. That means containers are stacking up at China's seaports. They're not getting trucked across the country to customers. Some ships are even just idling offshore.

Zhu says shipping is kind of like a big bus route with multiple stops around the world, and right now, many of those routes are being canceled altogether. Through March this year, the ports of Tacoma and Seattle expect 26 fewer cargo ships to call, she says. That would be double the number cancelled during the same period last year, mostly due to the Trump administration's trade wars.

"The coronavirus hit like a thunderclap without any warning," says Peter Friedmann, executive director of the Agriculture Transportation Coalition, based in Washington, D.C. "Without any ability for this interconnected world to prepare to find other sources for food or shower curtains."

He says with the Trump administration's trade wars, there were a few months to prepare before trade decreased each time. But this time around there was no such time.

In The Fight Against COVID-19, Labs Look To Create Coronavirus Antibodies

In The Fight Against COVID-19, Labs Look To Create Coronavirus Antibodies

Friedman says agricultural and forestry products produced across the U.S. like hay, frozen french fries, lumber, grain, soy, pork and chicken are all having trouble getting containers and space on ships.

He says at some Chinese ports there are no electrical plugs available for refrigerated containers with perishables. So sometimes entire containers worth hundreds of thousands of dollars are spoiling on the docks. He explains that in the U.S., every week of delay means more slaughtered hogs, bags of frozen fries and oysters backing up in chock-full coolers and freezers.

"The hogs keep growing, the pork has to be sold somewhere," Friedmann says. "It will be sold in the U.S. for lower prices than we're paying now."

The fruit trees aren't too far from budbreak, and pruning crews are quickly clipping branches back. The metallic rattle of orchard ladders and the clip, clip of sheers creates a lively beat.

Mark Hanrahan farms about 120 acres of cherries. And time is already short for this year's crop, even if the coronavirus scare were to end now. 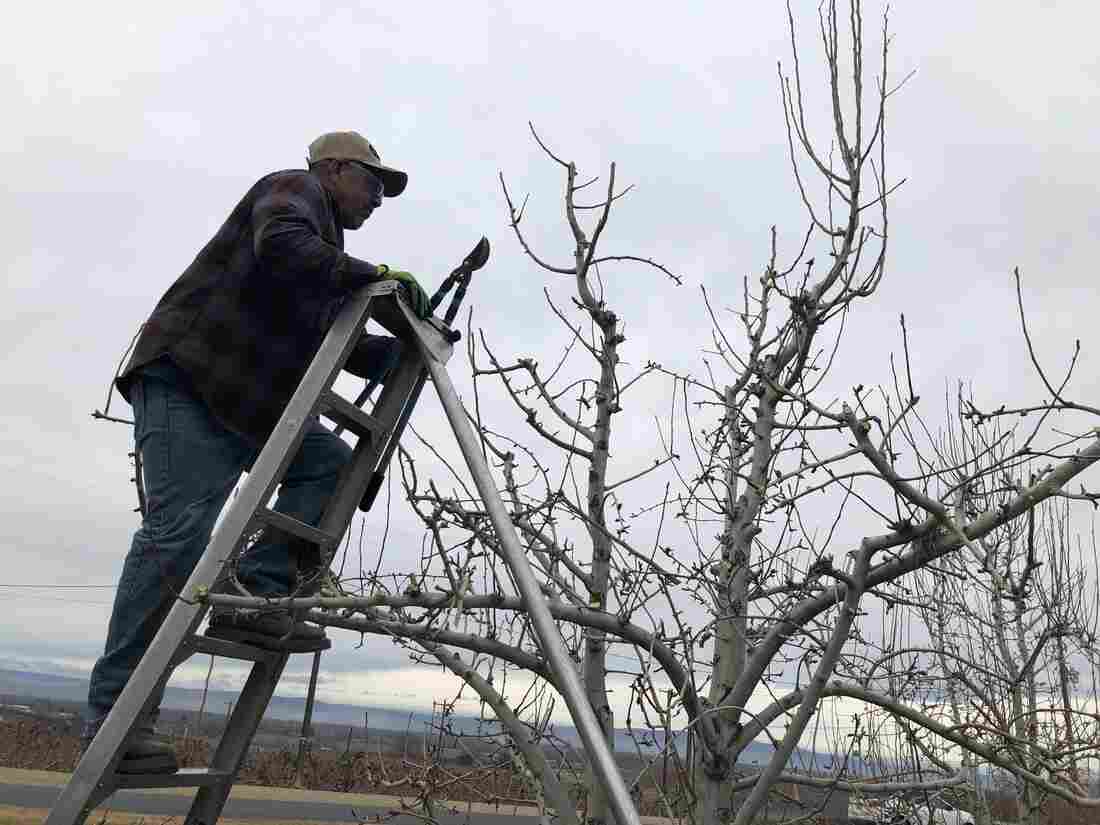 Juan Garcia, 61, of Toppenish, Wash., prunes a pear tree outside of Zillah. Crews are quickly preparing for spring in the Northwest's orchards, but owners worry there might not be a profitable market for their on-the-way fruit such as sweet cherries. Anna King/Northwest News Network hide caption 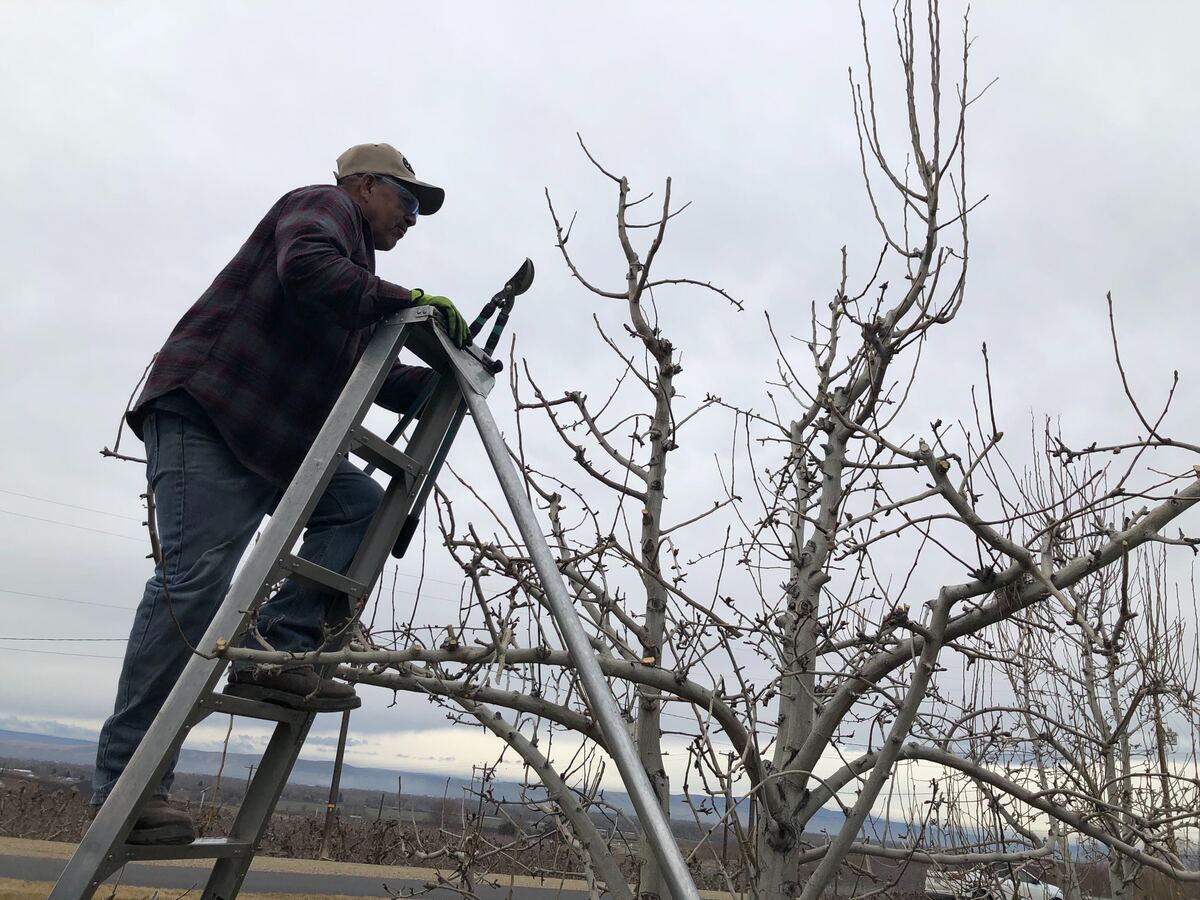 Juan Garcia, 61, of Toppenish, Wash., prunes a pear tree outside of Zillah. Crews are quickly preparing for spring in the Northwest's orchards, but owners worry there might not be a profitable market for their on-the-way fruit such as sweet cherries.

Before President Trump started the trade war with China, Washington sold more than 3 million 20 lb. boxes of cherries there, according to the Washington State Fruit Commission. Last year growers and exporters shipped about 1 million boxes.

Planned U.S. trade missions to open China to more cherries, blueberries and other Northwest products have been canceled. And if talks aren't scheduled again soon, it will likely be too late to relax tariffs on this season's fruit.

And it's a big hit for Northwest growers. Chinese consumers pay top price for luxury Northwest cherries. They retail about $10 a pound in China, compared to around $3 a pound in the U.S. That lower domestic market could be all that's left for local growers this year if cherries can't make it to Asian ports, or if Asian customers can't afford them.

"If our customers in China can't even get out of their houses, then we don't have that market," Hanrahan says.

In this big, circular trade wheel, some of the packaging that holds those Northwest cherries at market comes from Asia — zipping plastic bags with handles that carry about two pounds. Hanrahan says that usually those plastic bags would be arriving in the U.S. right now, heading to packing houses in preparation for harvest.

They're still not here.

But at the Port of Tacoma, Tong Zhu hangs on to a glimmer of optimism. She imagines the pent-up demand for imports on both sides of the Pacific.

"I see a tsunami of cargo coming in from China," she says.