Accessibility links
Judge Mulls Roger Stone's Bid For A New Trial Amid Attacks On Judge From Trump Roger Stone, a self-styled "dirty trickster" and longtime adviser to President Trump, is expected to appeal. The president, meanwhile, has left open the door to a possible pardon for Stone. 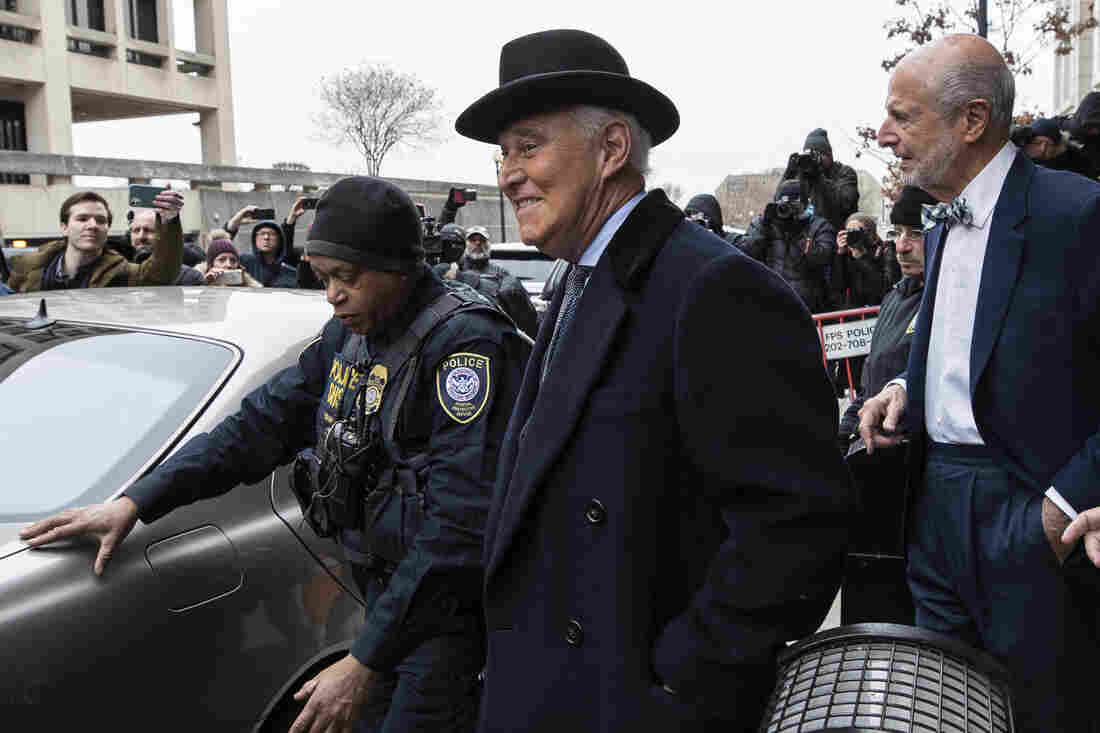 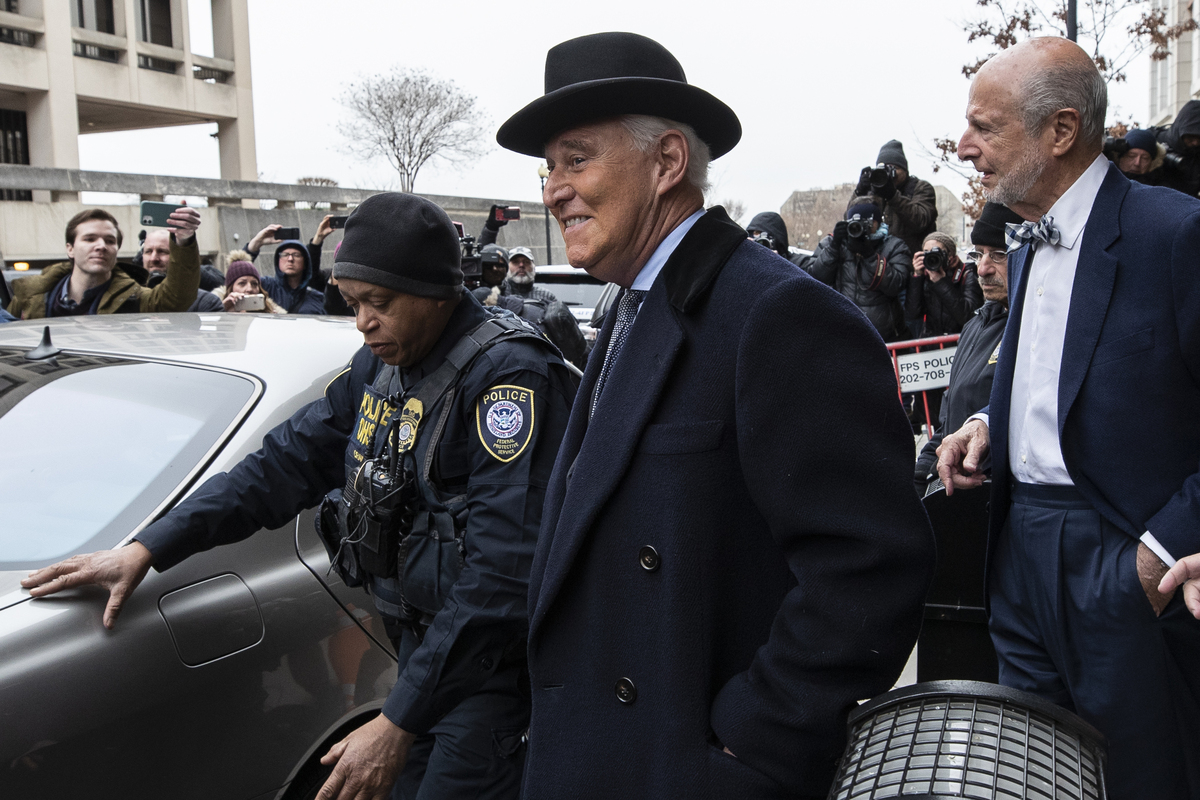 A federal judge in Washington on Tuesday heard arguments from Roger Stone's lawyers and federal prosecutors on the longtime Republican operative's bid for a new trial based on his allegations of juror misconduct.

The more than four-hour hearing before Judge Amy Berman Jackson came less than a week after Jackson sentenced Stone to more than three years in prison for obstruction, witness tampering and lying to Congress. Stone, a friend of Trump's for more than three decades, was convicted in November by a jury on all seven counts brought against him by special counsel Robert Mueller as part of the Russia investigation.

Jackson did not rule Tuesday on Stone's motion for a new trial, saying before she closed the day's proceedings that she will "take the matter under advisement."

But she opened the hearing in federal court in Washington, D.C., by raising concerns about the personal safety of the trial jurors, particularly in light of the president's tweets attacking the credibility of the forewoman of the jury.

"I think it's without question that this is a highly publicized case," Jackson said.

"And in a highly polarized political climate in which the president of the United States himself has shone a spotlight on the jury," she said. "The risk of harassment and intimidation of any jurors who may testify in a hearing later today is extremely high."

Those angry about Stone's conviction, the judge noted, "may choose to take it out" on the jurors personally.

Jackson then ordered that courtroom cleared of spectators and journalists for the rest of the proceedings, which included the surprise that she had called 11 members of the jury back to the court for potential questioning.

Reporters and members of the public were able to listen in on what transpired in the courtroom via an audio feed. Lawyers were instructed not to refer to any jurors by their name or juror number.

As the drama unfolded inside the courtroom, Trump took aim at the jury foreperson, tweeting that the individual was "so tainted" for allegedly having "hatred" of Trump and Stone. Trump also accused Jackson of being "totally biased."

There has rarely been a juror so tainted as the forewoman in the Roger Stone case. Look at her background. She never revealed her hatred of “Trump” and Stone. She was totally biased, as is the judge. Roger wasn’t even working on my campaign. Miscarriage of justice. Sad to watch!

The motion seeking a new trial was filed under seal since it concerned the identity of a juror in the case, but Jackson said it involved questions about a questionnaire prospective jurors had to fill out during the jury selection process.

The jury forewoman answered questions under oath in the Tuesday hearing about her activity on social media, including a postings about Stone's arrest in which she wrote: "brought to you by the lock her up peanut gallery."

The forewoman was also asked about a fist-bump emoji the morning before the jury reached a unanimous guilty verdict. The forewoman said it was a message out of solidarity.

The forewoman said that at the time she answered the jury questionnaire she could not recall posting anything about investigations into Russian interference in the 2016 election; she added her answers were based on what she remembered.

A woman who identified herself on social media as the forewoman in the Stone case once unsuccessfully ran as a Democrat for Congress. The juror told the judge during jury selection that her former bid for office would not inhibit her ability to serve on the panel as a fair and impartial juror.

During Tuesday's hearing, the defense and the government were each allowed to select one unidentified juror to be brought in and questioned by Jackson.

In answers to a string of questions, they each described how the jury went about its work. Both said the jury examined each count Stone was charged with based on the evidence. Neither of them said there was any pressure to reach any particular conclusion based on personal bias.

In November, a jury convicted Stone for lying about his involvement in being a point person in the Trump campaign's efforts to obtain Russian-hacked Democratic emails.

During the trial, prosecutors offered emails, text messages and public statements showing that Stone had lied to House investigators about his central role in communicating with the anti-secrecy group WikiLeaks about its possession of stolen emails.

Stone was the sixth former Trump associate to be convicted in connection with the investigation led by special counsel Robert Mueller into Russian interference in the 2016 election.

Before handing down a sentence of three years and four months for Stone, Jackson gave lengthy remarks about the threat posed to an independent judiciary as attacks on judges, juries and the system itself become more widespread. Such smear tactics against the courts system, she said, should be met with "dismay and disgust."

"The truth still exists. The truth still matters," she said. "Roger Stone's insistence that it doesn't, his belligerence, his pride in his own lies are a threat to our most fundamental institutions, to the very foundation of our democracy."

Justice Department lawyers had originally recommended seven to nine years in prison for Stone, which Trump described as "horrible and unfair." Following those comments, the Justice Department revised down its initial prison request, leading to four prosecutors on the case to withdraw.

Supporters of Stone have called on Trump to pardon him. Speaking at an event last week in Las Vegas, the president said "I'd love to see Roger exonerated," calling him "a good person," but also saying he wants "the process to play out."

Over the weekend, Jackson rejected a request by Stone's legal team that she step down from the case.