Accessibility links
Supreme Court Rules Border Patrol Agents Who Shoot Foreign Nationals Can't Be Sued In a 5-4 decision, the court ruled Tuesday that families of noncitizens shot by federal agents on foreign territory have no constitutional right to sue for damages in U.S. courts. 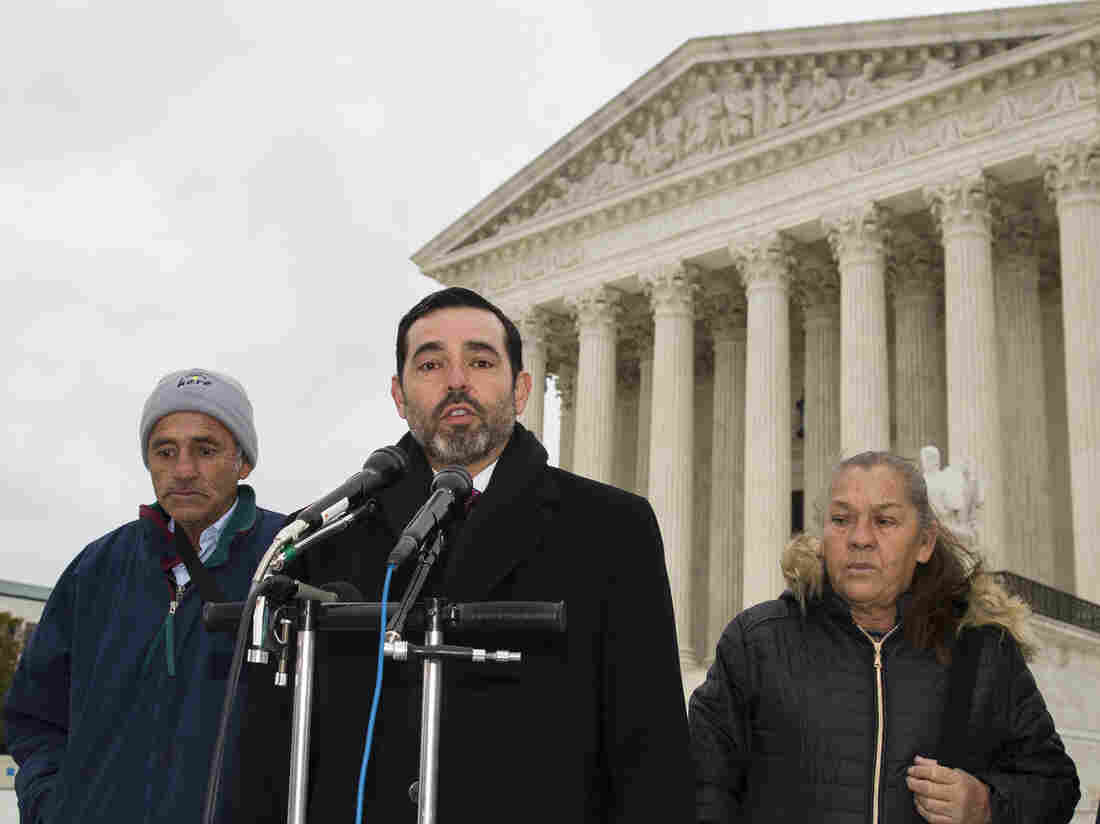 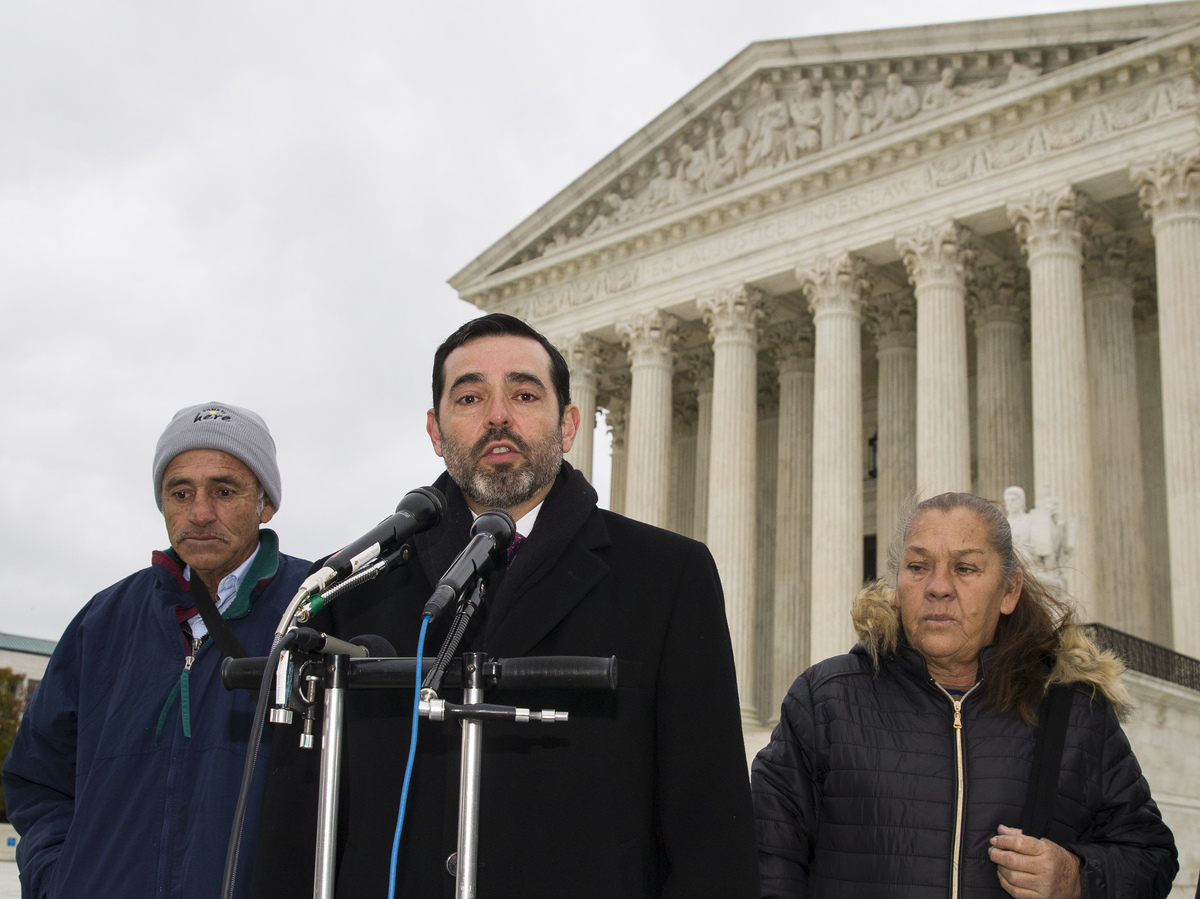 Attorney Cristobal Galindo, center, is accompanied by Jesus Hernandez, left, and Maria Guereca, and attorney Marion Reilly in front of the Supreme Court, in Nov. 2019.

He did. And there's a video of it.

In 2010 Mesa, an on-duty U.S. Border Patrol agent who was at the border in El Paso, Texas, shot Hernández at least twice — once in the face. At the time, the boy, a Mexican national, was on the southern side of the border in Ciudad Juarez.

What is in question, and at the core of a legal dispute the U.S. Supreme Court has been trying to resolve for nearly three years, is whether Hernández's parents, who are also Mexican nationals, have a legal standing to sue Mesa for damages in the killing that occurred outside of U.S. territory.

The parents argued that the federal agent's unreasonable use of excessive force violated the teenager's Fourth and Fifth Amendment rights, which protect a person from unreasonable search and seizure and assure due process protections.

On Tuesday the court delivered its decision: The Hernández family cannot sue.

The majority-conservative opinion — 5-4 — affirmed previous lower court rulings that foreign nationals are not protected by U.S. federal laws, which can only be applied domestically.

Justice Samuel Alito, who wrote the opinion, said the deadly incident is a matter of national security, which is under the purview of Congress or the president. Those branches alone, he said, possess the power "to authorize the award of damages for injuries inflicted outside our borders."

"A crossborder shooting affects the interests of two countries and, as happened here, may lead to disagreement. It is not for this Court to arbitrate between the United States and Mexico, which both have legitimate and important interests at stake and have sought to reconcile those interests through diplomacy," Alito said.

The 20-page opinion cites numerous cases where Congress has enacted statutes creating a damages remedy for persons injured by government officers, while taking "care to preclude claims for injuries that occurred abroad."

The court could potentially undermine border security by weighing in, Alito concluded.

The dissenting opinion authored by Justice Ruth Bader Ginsburg and joined by Justices Stephen Breyer, Sonia Sotomayor and Elena Kagan, dismisses the premise that the shooting is a case of national security.

According to court documents Hernández and a few friends had been playing a game in a cement culvert over which an invisible line separates the two countries. The kids dared each other to run through the dry drain pipe, crossing the unmarked border, in order to touch the fence on the U.S. side then run back to the Mexican side.

When Mesa came up on the boys they were on the El Paso side. He managed to detain one for illegal border crossing but Hernandez ran back across into Mexico. That's when Mesa fired the shots, killing the unarmed teenager.

The border agent claimed he shot Hernandez because the boy had launched a barrage of rocks at him and he feared for his life. Video footage of the fatal incident contradicts that account.

In A First, Border Agent Indicted For Killing Mexican Teen Across Fence

The shooting drew international attention, and an investigation by the Department of Justice concluded that Mesa had not violated Customs and Border Protection policy or training, and declined to bring charges against him.

The Obama administration also denied Mexico's request for Mesa to be extradited to face criminal charges in Mexico.

In the minority opinion, Ginsburg argued that regardless of Hernández's status as a noncitizen, the lawsuit should have been allowed because Mesa was on U.S. soil when he fired the shot.

"It scarcely makes sense for a remedy trained on deterring rogue officer conduct to turn on the happenstance subsequent to the conduct — a bullet landing in one half of a culvert, not the other," Ginsburg wrote.

She noted that if Hernández been standing on American soil, he would have constitutional rights and the officer would be liable.

"The only salient difference here: the fortuity that the bullet happened to strike Hernández on the Mexican side of the embankment. But Hernández's location at the precise moment the bullet landed should not matter one whit," she said.

Lee Gelernt, an attorney with the American Civil Liberties Union, who argued the case said "border agents should not have immunity to fatally shoot Mexican teenagers on the other side of the border fence."

"The Constitution does not stop at the border," he added.

Hernández v. Mesa is not the only cross-border shooting case that is pending. Tuesday's decision is expected to put an end to a similar civil lawsuit over the cross-border killing of a Mexican teenager by a Border Patrol agent in Arizona.

Juries found the agent not guilty in two criminal trials over the shooting. But the civil case has been on hold in the Ninth Circuit Court of Appeals for years while the Supreme Court reached a decision in the Hernández case.