Accessibility links
Fight For $15 'Gives Me Hope': How Low-Wage Workers Rose Up Against Stagnant Pay When some fast-food workers in New York went on strike one morning in 2012, they had no idea it was the beginning of an unusual movement that would propel an economic revolution. 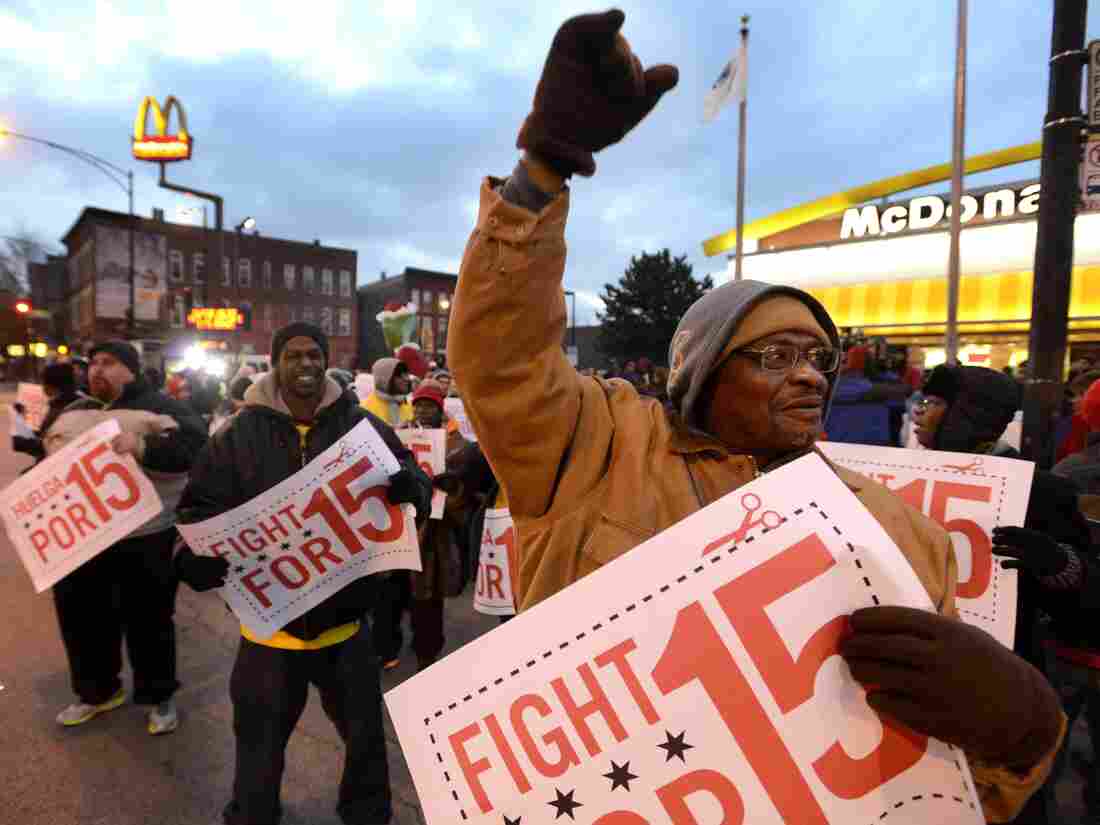 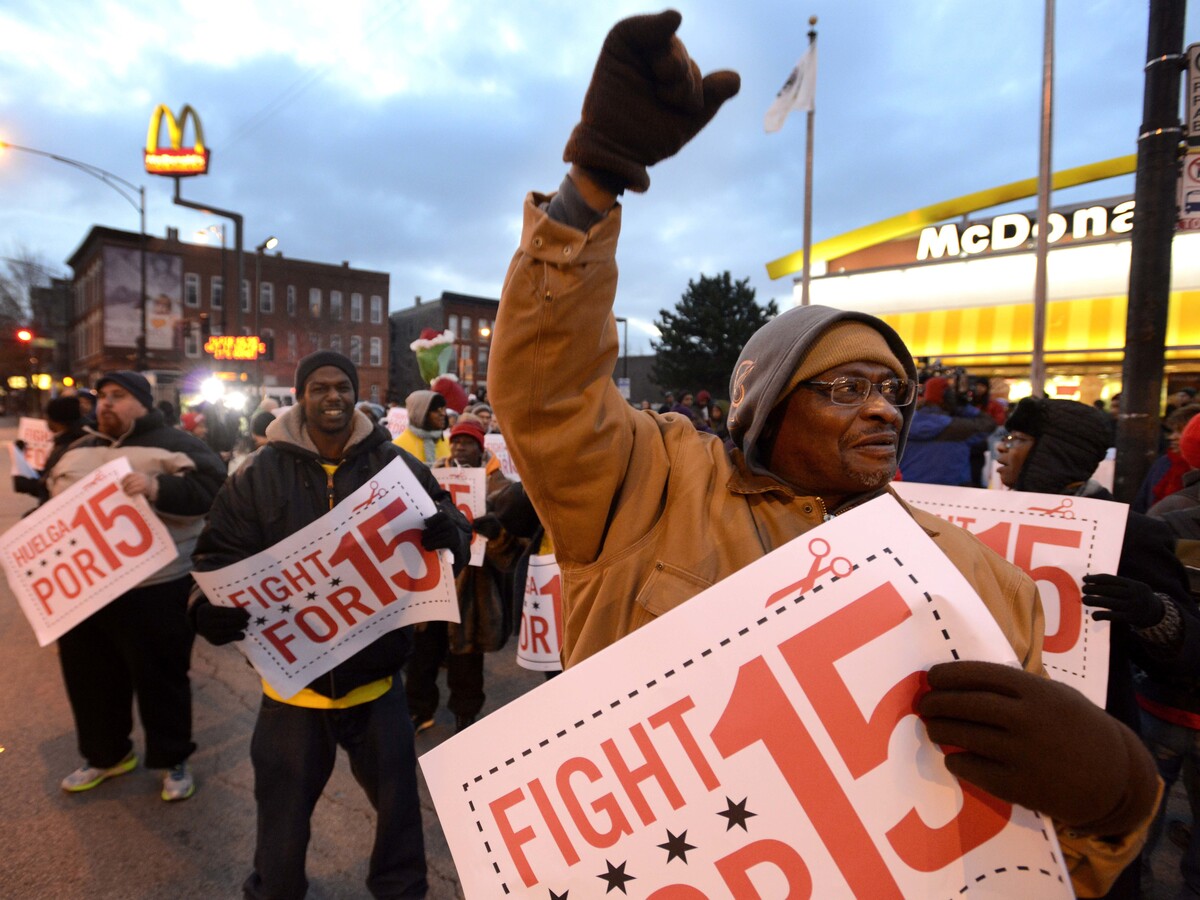 Demonstrators rally for better wages outside a McDonald's restaurant in Chicago in December 2013.

Kim Thomas felt drawn to being a home health aide after caring for her own ailing mother. Human dignity, she says, can be simple, like a bath and a favorite snack.

When Thomas first started visiting homes to care for patients, she made $7 an hour. That was in North Carolina about 16 years ago. Her pay inched up over time, to $10.50. To try to make ends meet, she sometimes would work through the night, dozing in patients' homes.

That's when Thomas, 55, discovered and joined the Fight for $15 movement, which had galvanized workers around the U.S. to march and rally for higher pay.

Initially, in 2012, it started with mainly fast-food and retail workers. But within years, the campaign drew in low-wage workers from all over, including those with jobs in airports, child and health care, even universities. It grew into one of the largest waves of labor activism in recent history.

And it was unusual. Though rallies were funded and organized by labor unions — including the prominent Service Employees International Union — the tens of thousands of workers who showed up did not belong to a union, nor could they join one. 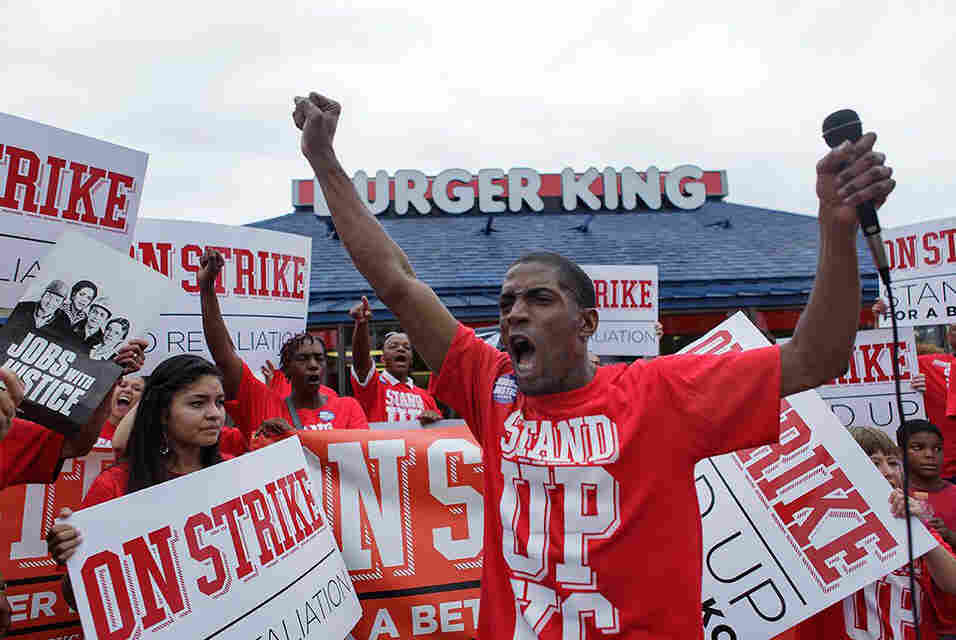 "Walking off the job, you're taking on your boss head-on, and that sounds like some pretty scary stuff, right?" says fast-food worker Terrence Wise, shown here at a 2013 strike in Kansas City, Mo. "But I always thought, what am I more afraid of? Taking on my boss or being homeless again with my three little girls?" Courtesy of Fight for $15 and a Union hide caption

toggle caption
Courtesy of Fight for $15 and a Union 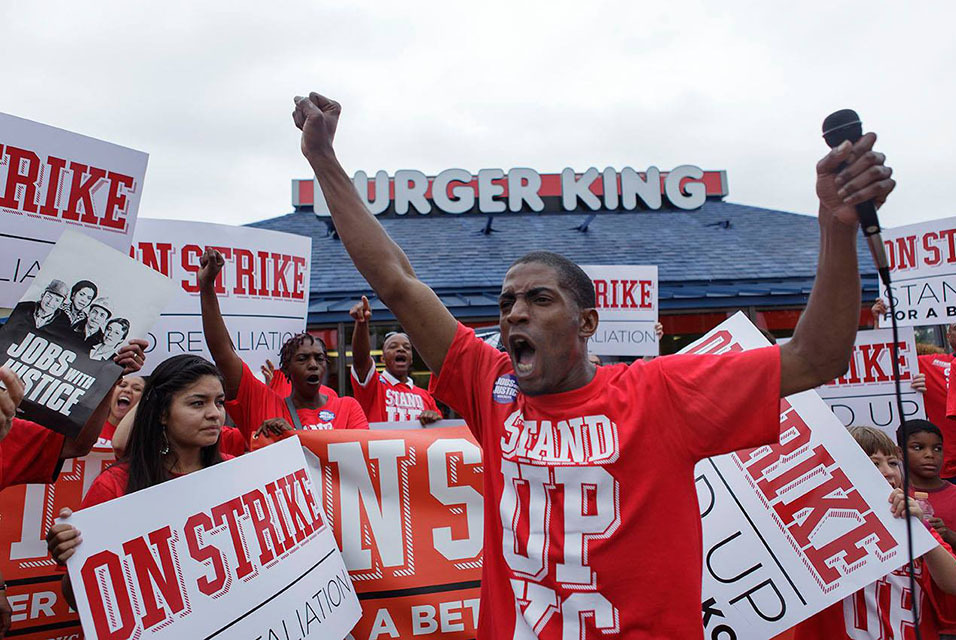 "Walking off the job, you're taking on your boss head-on, and that sounds like some pretty scary stuff, right?" says fast-food worker Terrence Wise, shown here at a 2013 strike in Kansas City, Mo. "But I always thought, what am I more afraid of? Taking on my boss or being homeless again with my three little girls?"

Courtesy of Fight for $15 and a Union

The demonstrations grabbed headlines as they gained momentum across the country. Sit-ins, arrests for civil disobedience and call-outs like "Hold the burgers, hold the fries, make our wages supersized" made the evening news. Their chants and posters started melding with other movements like Black Lives Matter and #MeToo. High-profile politicians like Bernie Sanders began joining the rallies.

The campaign started to see results as over half of U.S. states and more cities went on to raise minimum wages, a few of them to $15. This, in turn, helped propel an extraordinary change in the U.S. economy: A few years later, wages started growing faster at the bottom than the top. The National Employment Law Project, which advocates for low-wage workers, estimates that new state and local wage laws gave some 22 million workers a collective raise of $68 billion.

"I was just talking to a friend recently, like, 'bro, we would still probably be making 7, 8 bucks an hour if we never stood up and fought,' " says Terrence Wise, 40, who's now with McDonald's. He has testified before Congress and spoken at the White House as one of the faces of the movement.

Wise was working two jobs — at Burger King and Pizza Hut — in Kansas City, Mo., when the Fight for $15 arrived there. It was one the first few cities where low-wage workers rallied within months of the original 2012 strike of New York's fast-food cooks and cashiers. Within years, demonstrations ballooned to over 200 cities. 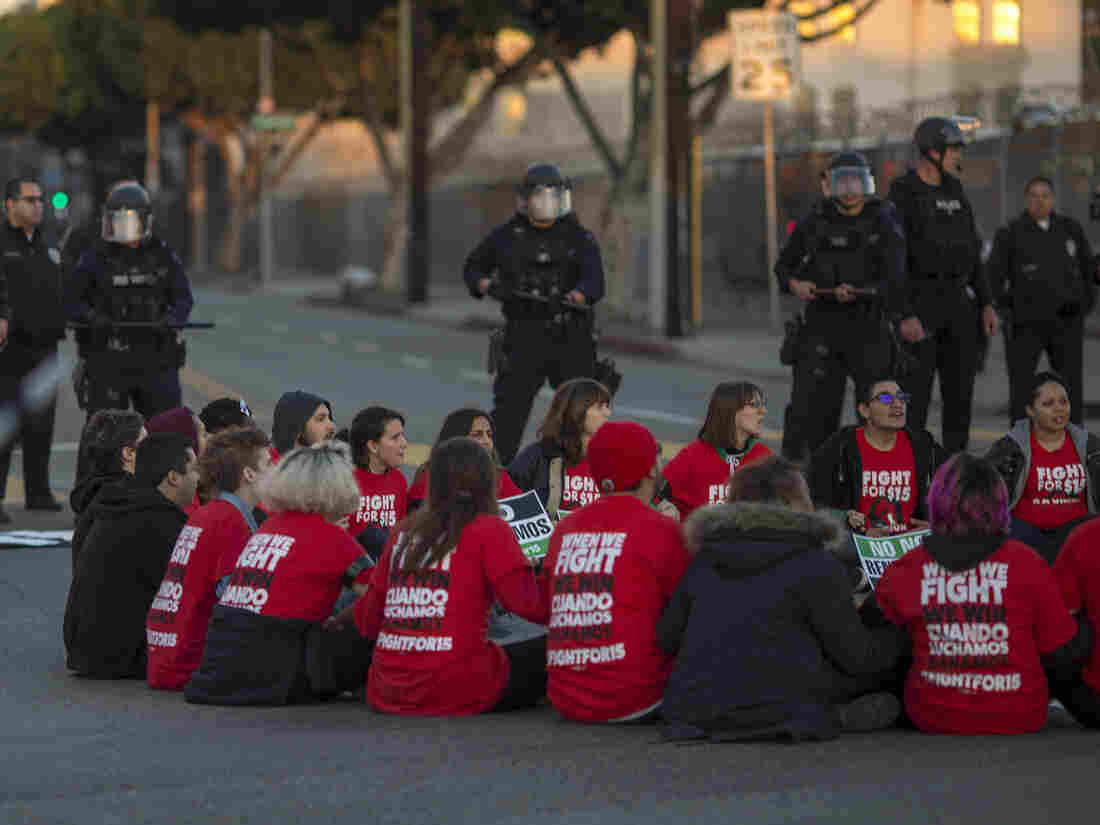 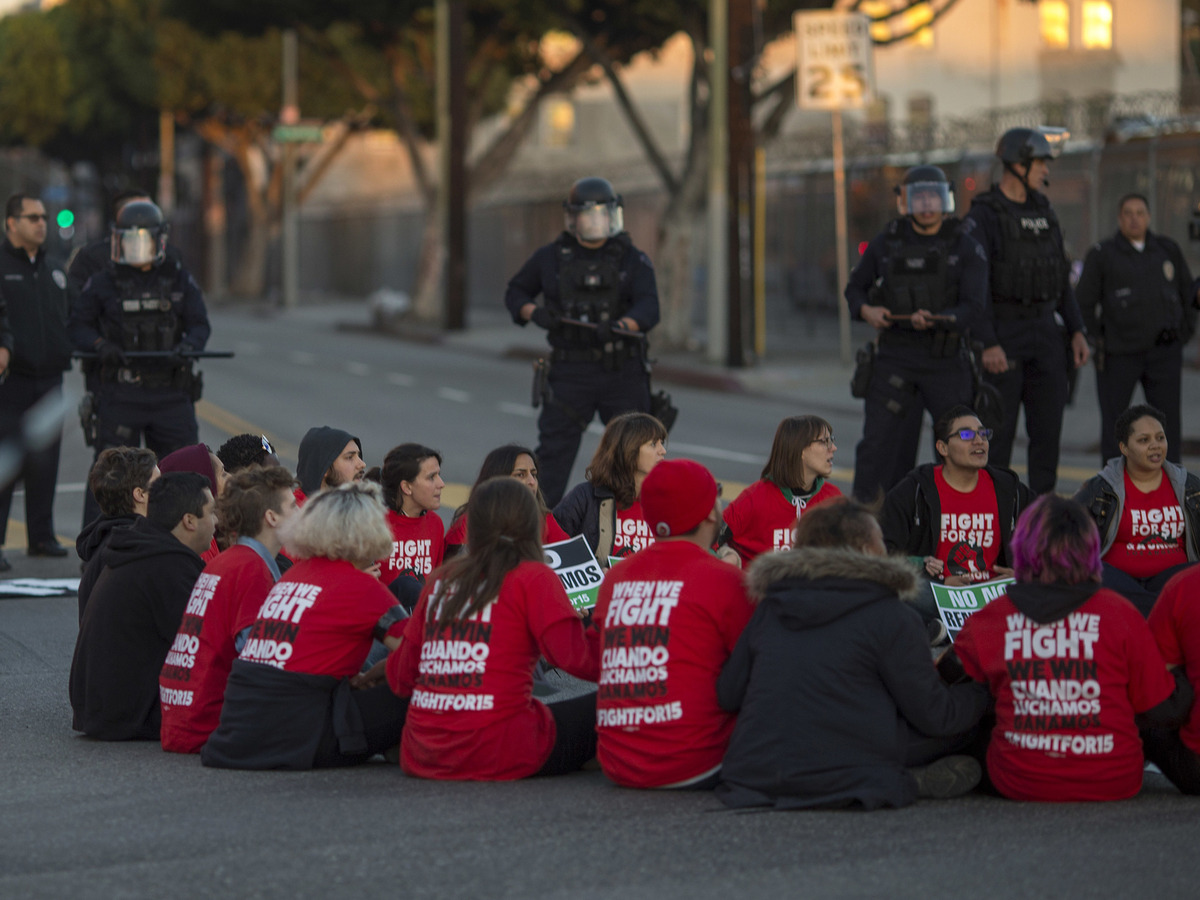 Police surround striking McDonald's workers sitting in an intersection in Los Angeles, demanding a $15 per hour wage and union rights during nationwide 'Fight for $15 Day of Disruption' in November 2016.

The timing proved instrumental. The economy was recovering from the Great Recession and unemployment was falling, which meant that employers were finding it more difficult to draw workers. And even though corporate executives were getting bonuses, low-wage workers had not seen raises in years.

The federal minimum had been stuck since 2009 at $7.25 an hour, where it remains today. Businesses have long argued that higher wages risk hurting workers overall because their cost forces employers to weight cutbacks on hours or even staff.

Eventually, some of the nation's largest employers including Target, Walmart and Amazon made splashy announcements about lifting their lowest wages. Amazon and Walmart even began advocating for a higher federal minimum.

Economists including Federal Reserve Chairman Jerome Powell have acknowledged that higher minimum-wage laws on the state and local level played a role: Pay grew faster in places that raised their minimums, Powell said in Congress this month.

"But really it's much broader than that," he added. "A bigger factor really just is very low unemployment and a strong labor market, high job creation, that's the main driver."

Nonetheless, workers in the Fight for $15 attribute their pay increases to their movement. Rosa Calderon, 49, is one such worker who thanks the labor organizing for recent pay bumps she and her son both got at McDonald's in Santa Clarita, Calif.

"Before, I used to have to share an apartment with another family," Calderon told NPR in Spanish, "but now I have my own apartment for my own family."

But the marches haven't stopped. That's because for all the states that did raise their pay minimums, many didn't. Neither did Congress. The campaign did not spur a surge of unionizing. The value of $15 is worth less and less every year. Workers say they still join the campaign to push for the right to unionize, to get collective bargaining for better pay and benefits. 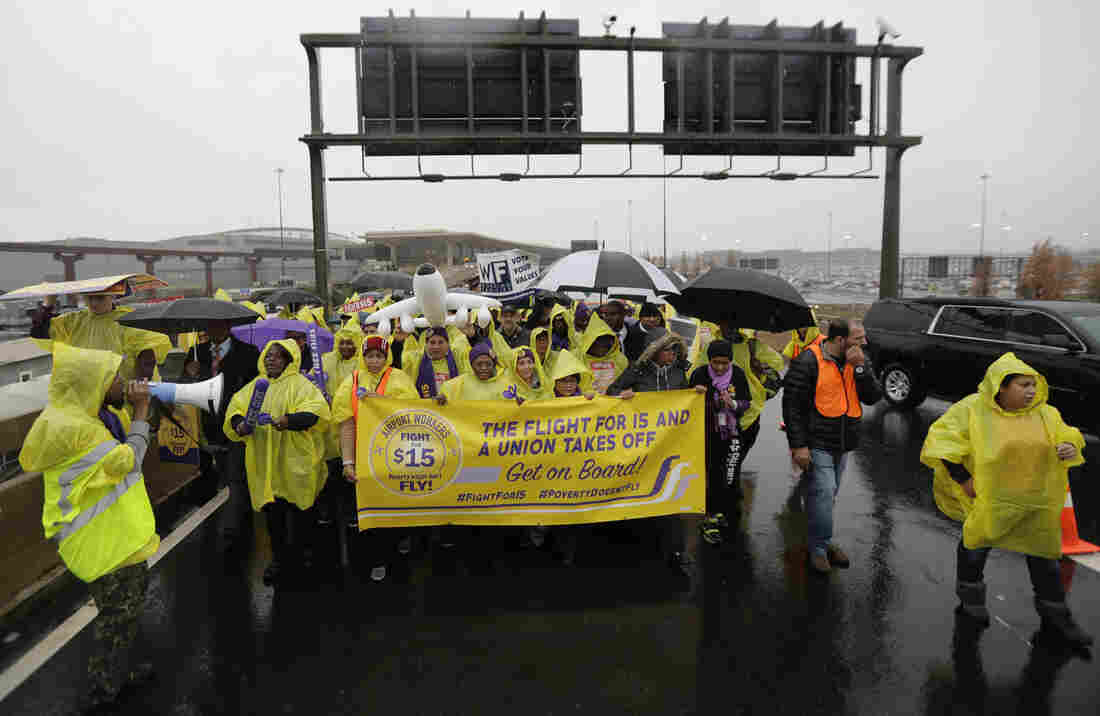 "I don't want to live payday to payday — that's not a life to live," says Ronald Franklin, 49, a former U.S. Navy veteran who's now a warehouse and ramp agent for a contractor at Chicago's O'Hare Airport. He says he commutes for about three hours to work and makes $14.10 an hour.

Health aide Thomas says she lives "a promise-to-pay to promise-to-pay" life, by covering what she can when bill collectors call about her cellphone or car insurance payments. 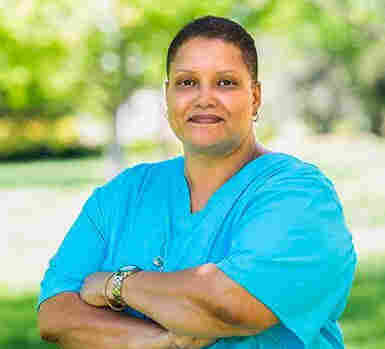 Thomas now cares for the sick and dying as a hospice aide in South Carolina, starting her days around 4:30 a.m., visiting up to a dozen people a day. For many, she's the first person they see, helping them get up, shower, dress and eat.

"I truly feel like this is where god wants me to be," Thomas says, and later adds: "When I started hearing how many states are actually winning the $15 an hour, it gives me hope."