Accessibility links
Review: 'Apartment,' By Teddy Wayne Teddy Wayne's new novel is a portrait of loneliness and male insecurity set against the backdrop of academia in the mid-1990s — and a precious, rent-stabilized apartment in Manhattan.

'Apartment' Will Stay With You, Long After You Shut The Door

'Apartment' Will Stay With You, Long After You Shut The Door 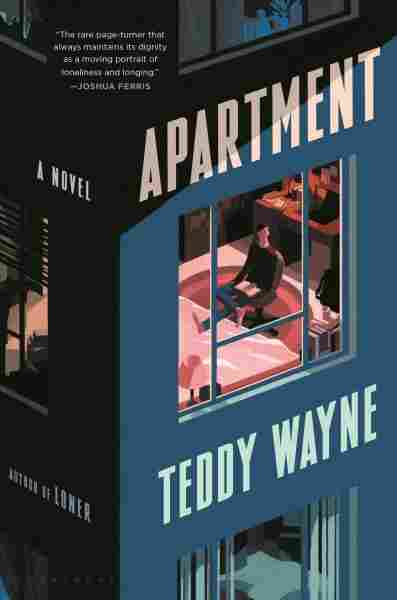 Teddy Wayne's fourth novel is written in the key of Edward Hopper. Apartment is a portrait of loneliness and male insecurity set against the backdrop of the hyper-competitive world of Columbia University's graduate writing program, where ambition and self-doubt go hand in hand, and the workshops seem designed to separate the anointed from the hacks — or, in this case, the men from the boys.

Like Loner, Wayne's previous novel, Apartment zeroes in on an outsider at an Ivy League university. But where Loner (currently in development at HBO) took on white, male narcissistic privilege with a disconcertingly creepy — sickening, actually — tale of a freshman misfit at Harvard who becomes an obsessive stalker, the purview of Apartment includes male friendship, failed ambition, geographical and class divides in America, and divergent views of masculinity.

Set primarily in 1996, Apartment dwells in a glaringly all-white, all-male, homophobic world. After a slow start, it builds to a carefully seeded climax that will leave readers — and especially writers — queasy.

Wayne's unnamed first person narrator comes from a long tradition of desperately lonely, closed off characters — think Dostoyevsky's misanthropic anti-hero in Notes from Underground and Zoë Heller's Barbara Covett in Notes on a Scandal. An alternate title for Wayne's novel could be "Notes on an Apartment" — with the accent on apart.

The apartment in question is the narrator's rent-stabilized, two-bedroom unit in Manhattan's Stuyvesant Town development. He's been subletting illegally for six years — through college at NYU and two years of copy editing at a men's magazine — from his great-aunt, who has moved to New Jersey. His wealthy, guiltily divorced father has agreed to keep paying the rent, along with tuition at Columbia's prestigious writing program for his cosseted only child.

After a slow start, it builds to a carefully seeded climax that will leave readers — and especially writers — queasy.

Apartment opens with the narrator's first writing workshop, at which his transparently autobiographical novel-in-progress, The Copy Chief, about "the minor-key tragedy of suppressed creativity," is being workshopped. High on the list of experiences I would never choose to re-live — right up there with high school — is Columbia's MFA program. So it's a tribute to Wayne's subtly layered prose that I kept reading long enough to understand the stilted, self-consciously writerly tone of the narrator's tale about what turns out to be the crucial turning point in his life.

This is a guy who is more educated than talented, and smart enough to know the difference. Still, we feel for him when his pretentious-as-all-get-out manuscript is torn apart after the teacher wonders whether perhaps he was deliberately portraying "a writer struggling under the weight of his own clichés." Wayne's devastated narrator notes that this "had the effect of adding a drop of blood to shark-infested waters."

Only one person speaks up to defend him — a scholarship student from Illinois named Billy Campbell who feels socially and academically out-classed — but whose talent is obvious to everyone, including the narrator. His defense is enough to spark a friendship predicated on their very different needs: the insecure narrator's desperation for human contact and a rare chance to show off his relative sophistication, and Billy's more dire need for affordable housing.

The two aspiring writers make a deal: Billy moves into the narrator's spare bedroom in exchange for cleaning, cooking, and — unspoken — friendship. They also edit each other's work, though the narrator recognizes that he's "the disproportionate beneficiary" of this exchange.

Billy, a churchgoer and Republican who dresses in cheap thrift shop castoffs and knows about the NFL but not DFW (David Foster Wallace), is seen by his New York friend as the embodiment of disempowered working class men from the "forgotten parts of the country." But it's impossible for him not to notice that Billy, who bartends most nights, is disciplined, hardworking, and "ruthlessly economical with his limited freedom." He is also better at everything — not just writing, but fixing things around the apartment and connecting with people, including women. For the most part the narrator is more flattered by Billy's attention than jealous of his superior literary and sexual prowess, but things get sticky when the power dynamic between them shifts.

The narrator is occasionally tempted to confide his deepest secrets, but stays mostly closed — "clamped shut like the shell of a stubborn pistachio, with just a sliver of space for only the most motivated prier" — or so he thinks. As descriptions of his roommate's bare torso and "the muscled curve of his buttocks glazed with water" glimpsed behind a shower curtain leak into his story, we gradually come to understand the evasions and denial underlying the narrator's terrible loneliness.

As its title suggests, real estate plays a central role in Wayne's exploration of the links between socioeconomics and expectations. While readers may be happy to move on from this sad story of a man who finds himself shut out from the life he envisioned, its sobering climax is bound to stay with you long after you close the door on Apartment.