Accessibility links
Alaska Feels The Brunt As Investors Promise Retreat On Fossil Fuels JPMorgan Chase is the latest investor to say it won't finance drilling in Alaska's Arctic. Some welcome the move, but there's also concern in a state that depends heavily on oil revenue. 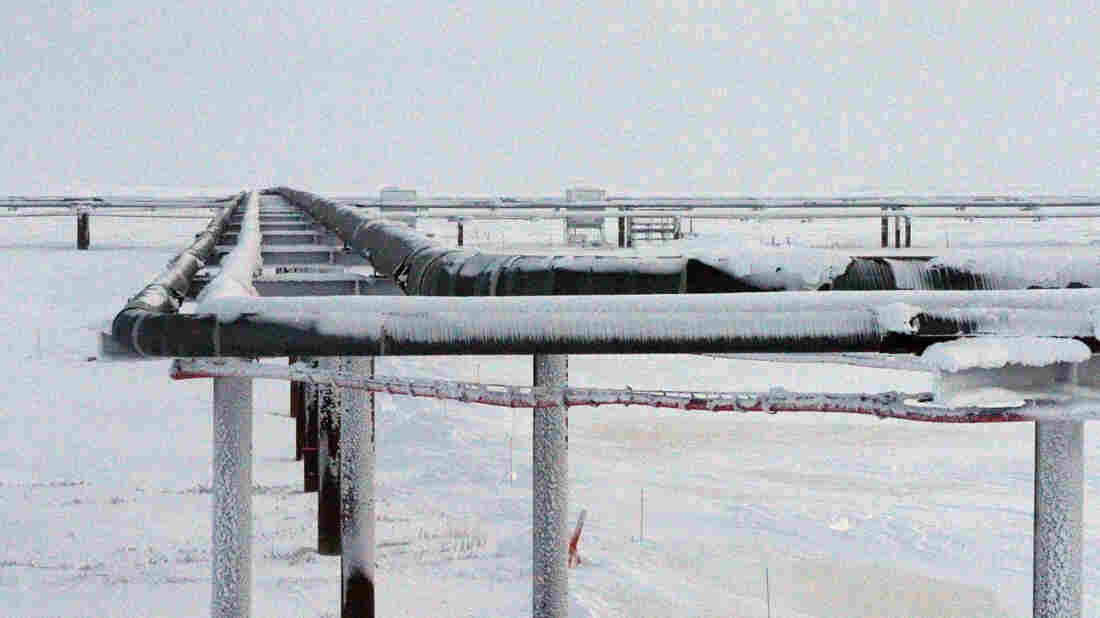 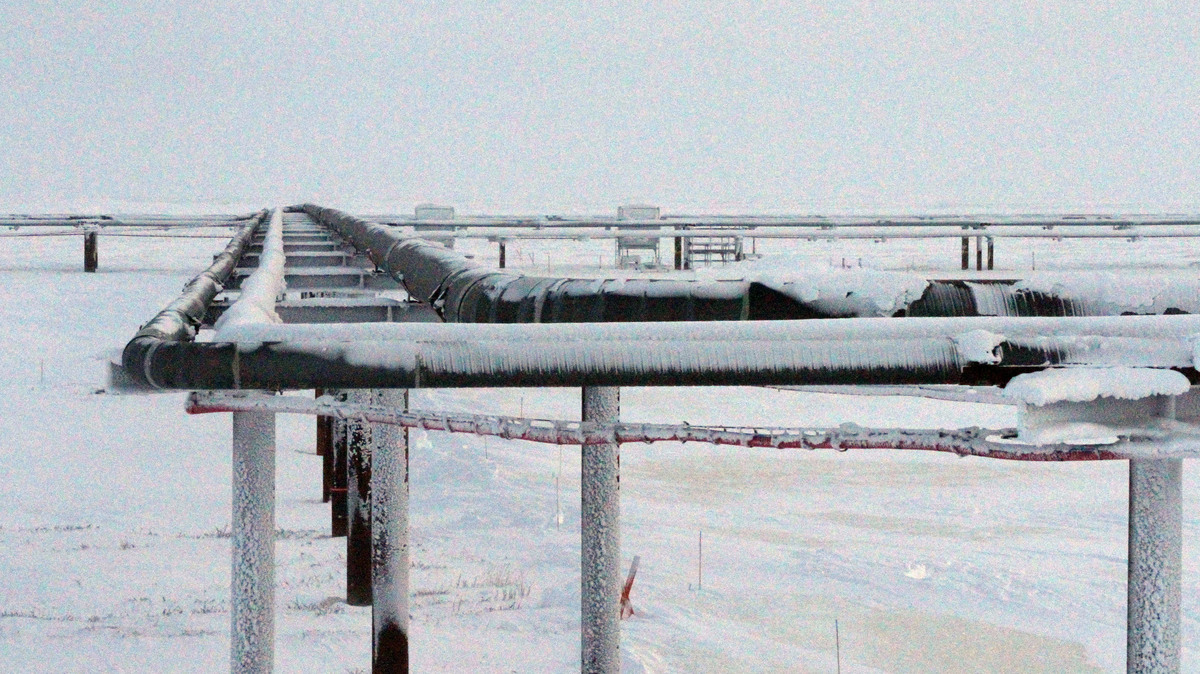 A ConocoPhillips drilling site on Alaska's North Slope in 2016.

JPMorgan Chase is the latest in a growing list of investors to restrict work with coal companies and stop funding new oil and gas projects in the Arctic. Its announcement this week was met with disappointment from environmental advocates, who want more aggressive action from one of the fossil fuel industry's biggest lenders.

But the news has hit harder in Alaska, where most oil is produced from the Arctic's North Slope, and the government depends on the industry for revenue. The string of announcements has left elected officials and oil companies playing defense.

In December, Goldman Sachs said the bank would refuse to finance Arctic drilling, including in the Arctic National Wildlife Refuge. Since then Barclays and Lloyds Bank of Great Britain have also effectively ruled out investments in new projects there, after environmentalists raised concerns about impacts on ecosystems, indigenous people and the global climate.

"One position by one large company I don't think changes a lot," says Andy Mack, a former Alaska natural resources commissioner who helped lead the state's push to open the Arctic Refuge to drilling. "But if you see two or three or four large companies make these types of announcements, it's certainly something that oil companies will all have to take into account."

Many other investors remain for Arctic projects, and the Trump administration has pushed to open the Arctic Refuge and the National Petroleum Reserve in Alaska to new development. But an aggressive environmental advocacy campaign has created undeniable obstacles for businessmen like Mead Treadwell, who's seeking investment for his company Qilak LNG.

Qilak is pushing a liquefied natural gas project on the North Slope, and Treadwell has honed his pitch accordingly, to respond to the questions and concerns he expects from bankers.

He plays up the fact that Qilak's LNG project would connect to infrastructure that already largely exists on the North Slope — not to new oil fields, which conservation groups say would extend the world's dependence on climate-warming fossil fuels.

Treadwell also makes the case that LNG often displaces dirty coal-fired power plants, though the environmental benefits of that change are disputed by some scientists. And he highlights the jobs the project could create for indigenous residents of the North Slope and other areas of Alaska.

It's easier to show up at an annual meeting in some place like London or Brussels wearing a polar bear suit. There's not a similar symbol for Louisiana or Texas.

"I still believe that we will have billions of dollars in annual investment in the Arctic," Treadwell says. But "it's easier to show up at an annual meeting in some place like London or Brussels wearing a polar bear suit. There's not a similar symbol for Louisiana or Texas."

Alaska's economy is driven by the production of fossil fuels, which makes the state especially vulnerable to the campaign to transition away from oil. About a third of the state's unrestricted revenue comes from taxes and royalties tied to oil production.

The environmental movement has been targeting Arctic oil and gas projects in particular, arguing that development in the area poses unique environmental and social risks. Democratic members of Congress also got involved after Goldman Sachs' announcement, writing to other banks to ask them to follow the company's lead.

Several big Arctic oil projects are still under development on Alaska's North Slope. But there's a growing acknowledgment that the environmental lobbying is having an effect.

"'Arctic' seems to have turned into a four-letter word in the minds of a lot of these financial institutions," says an Alaska oil executive, who asked not to be named to avoid drawing attention to his particular company.

Hitting back by punishing banks

Gov. Mike Dunleavy reacted to Goldman Sachs' announcement by firing the company from a group of Wall Street firms it had chosen to help the state borrow money.

In an interview, Dunleavy suggested another way to punish banks that refuse to invest in Alaska oil projects: cutting them off from managing the assets of the $67 billion state-owned Permanent Fund, which was originally created with oil revenue. Goldman Sachs manages some $400 million for the fund, which paid the firm a total of $17 million in fees over the past three years.

"Some of these groups that don't want to do business in Alaska still want Alaska business," Dunleavy says. "They probably are going to come out a loser on that one."

In Washington, D.C., the members of Alaska's GOP Congressional delegation have sent their own letters to banking executives. "I can tell you for a fact I have never signed on to a letter that would specifically target investment opportunities in another colleague's state, to shut that down," U.S. Sen. Lisa Murkowski said in an interview.

She and other Alaska politicians note that there's support for continuing Arctic oil production among the North Slope's indigenous Inupiat people, who have benefited financially from development.

Another indigenous group, the Gwich'in, has fought oil development in the Arctic National Wildlife Refuge, citing risks to the caribou that they subsist on.

Brad Keithley, a retired oil and gas attorney, says there's a new argument that Alaska leaders could use to make their case to financial institutions. The state's oil industry uses comparatively little energy to produce its fossil fuels, according to newly-presented analysis from the Climate Leadership Council, an international group pushing a carbon fee and dividend program as a way to reduce emissions. In an email, council spokesman Carlton Carroll says that's in part because of Alaska's restrictions on flaring natural gas, and the industry's "consolidated and efficient infrastructure" in the state.

Those working to push financial institutions out of the oil industry, meanwhile, argue that Alaska's political leaders should be doing more to prepare the state for an economic future that's less dependent on fossil fuels.

"There's an opportunity to plan ahead," says Ruth Breech of the Rainforest Action Network. "That's why the leadership is important now."