Accessibility links
Opinion: Despite No Major Deal During Trump's Visit To India, There Was Progress Although no major trade deal was produced during President Trump's visit to India, there were other signs of progress in the U.S.-India relationship, writes the Brookings Institution's Tanvi Madan. 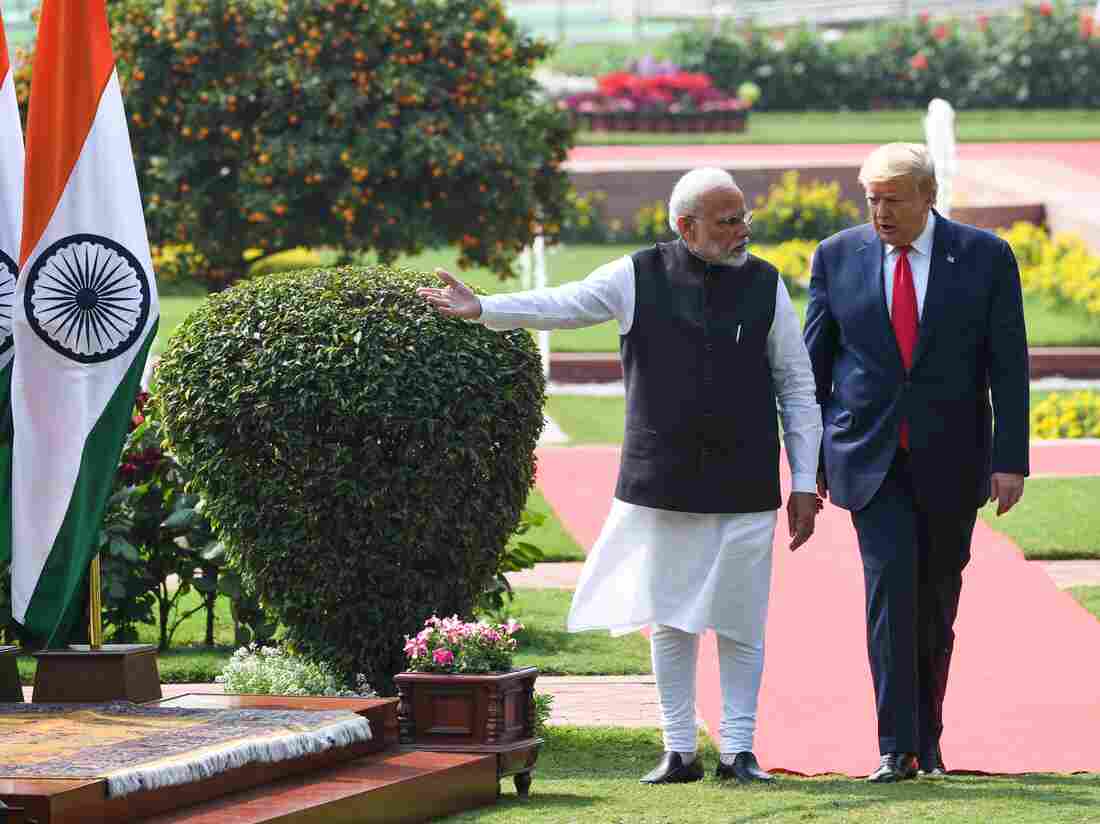 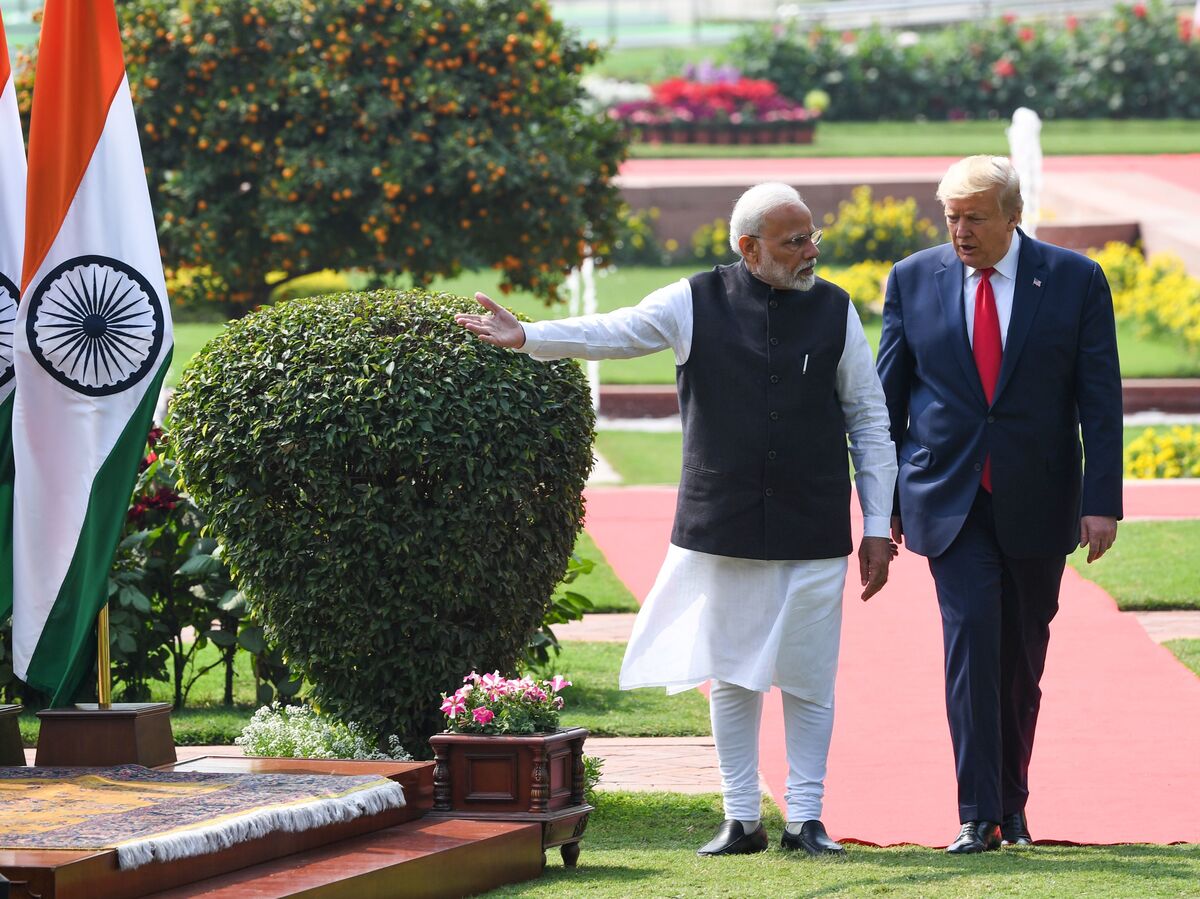 Tanvi Madan (@tanvi_madan) is a senior fellow in the Project on International Order and Strategy and director of the India Project at the Brookings Institution. She is the author of Fateful Triangle: How China Shaped U.S.-India Relations During the Cold War.

Following President Trump's two-day trip to India, his first official visit to the country, there's been some debate about its value. This is not unusual for U.S.-India leader-level trips, which — more so than in the case of other countries — seem to be measured on the basis of whether they produce a big deal.

That may be the result of the last big deal — a U.S.-India civil nuclear initiative laying the groundwork for the two countries' current strategic partnership.

Those hoping this time for a big deal — specifically, a trade one — will be disappointed. Trade negotiators had moved some way to reaching a mini-agreement, but had not been able to get it over the finish line.

Those concerned — whether from a strategic, economic or democracy and human rights perspective — about internal developments in India will also be disappointed. Trump mentioned the importance of Indian diversity multiple times in his speech on Monday and acknowledged that concerns about religious freedom and India's months-long detention of political leaders in Kashmir were discussed privately. But he refused to publicly comment on the Hindu-Muslim violence that erupted in Delhi during his trip — the worst in decades, resulting in at least 20 deaths — and seemed to support what he said was Modi's desire for "people to have religious freedom."

In New Delhi, Days Of Deadly Violence And Riots

Nonetheless, for those worried about trade frictions, primarily over tariffs and the trade deficit, harming strategic cooperation, there is cause for relief. To assuage Trump, Prime Minister Narendra Modi emphasized growing economic ties and a reduced trade deficit. Indian CEOs highlighted their investments in developing skills and manufacturing in the U.S., and their effort to keep Chinese equipment out of India's 5G network.

A joint statement released Tuesday seems to point to a "phase one" trade deal in the near future, and suggested progress on consultations that would help keep China's telecom giant, Huawei, out of India's 5G infrastructure. President Trump also noted that the two sides would work toward a more comprehensive trade agreement at the end of the year.

Those looking for continuity in the two-decades-long trend toward greater strategic cooperation between the two democracies will also find reason for optimism. Spurred by shared concerns about terrorism and a rising China's actions in the region, the U.S. and India have deepened defense and security ties over the last three years.

Announcements during the visit expressed determination to continue this cooperation, particularly in the Indo-Pacific, as well as in a revived homeland security dialogue.

Both sides will be pleased with India's decision to purchase some $3 billion worth of U.S.-made military helicopters for its navy and additional Apaches — Delhi because the former involves a transfer of technology; Washington because this is the first Indian defense deal completed during the Trump administration.

Given their shared concerns about China's giant infrastructure project, the Belt and Road Initiative, they also announced that the new U.S. International Development Finance Corporation will establish an office in India to cooperate on regional infrastructure projects, including renewable energy ones in India. And the U.S. Agency for International Development and its Indian counterpart will cooperate on development projects in third countries.

For Modi, the U.S. is strategically crucial, particularly in maintaining a favorable balance of power in Asia. He has made considerable effort to keep Trump on his side. During the president's visit, this was visible in the red-carpet welcome that included a massive audience. It also was evident in Modi's highlighting of deals ($70 billion in civil aviation, defense, education and energy) in a way that Indian prime ministers rarely do with the U.S. And it was clear from the lack of public criticism when Trump made positive comments about Pakistan.

India's efforts with the president clearly paid off — at least during the visit. Trump was highly complimentary of India and the prime minister, despite Modi's recent political and economic setbacks. Trump also downplayed trade differences, refrained from publicly pressuring India to exclude Huawei from its 5G network, and gave Modi the benefit of the doubt on domestic developments — something the president has been known to do with leaders he admires, like China's Xi Jinping.

Trump himself will likely feel he has made some political gains — even if not with Indian-American voters, who largely vote Democratic. Parts of his Ahmedabad speech on Monday and remarks on Tuesday — highlighting divinity, defense deals and how his trip would help combat illegal opioid production — seemed designed for his base back home. His campaign has already been using the visit to highlight the president's favorability abroad (and in a recent Pew survey, Trump almost matched Obama's rating in India).

But it was clear from Trump's remarks toward the end of the visit that his trade concerns with India have not disappeared. If Trump is re-elected, Delhi will need to be prepared that these issues will be on top of his list, with an expectation of greater concessions. Meanwhile, both sides will need to be prepared for headwinds — whether they come from developments within the countries, or from black swans like the coronavirus.