Accessibility links
Supreme Court Rules On Cross-Border Justice, Debates Free Speech On Immigration Justices said the parents of a Mexican boy fatally shot by a border agent can't sue. They then looked at whether advising immigrants to stay in the country illegally violates the First Amendment. 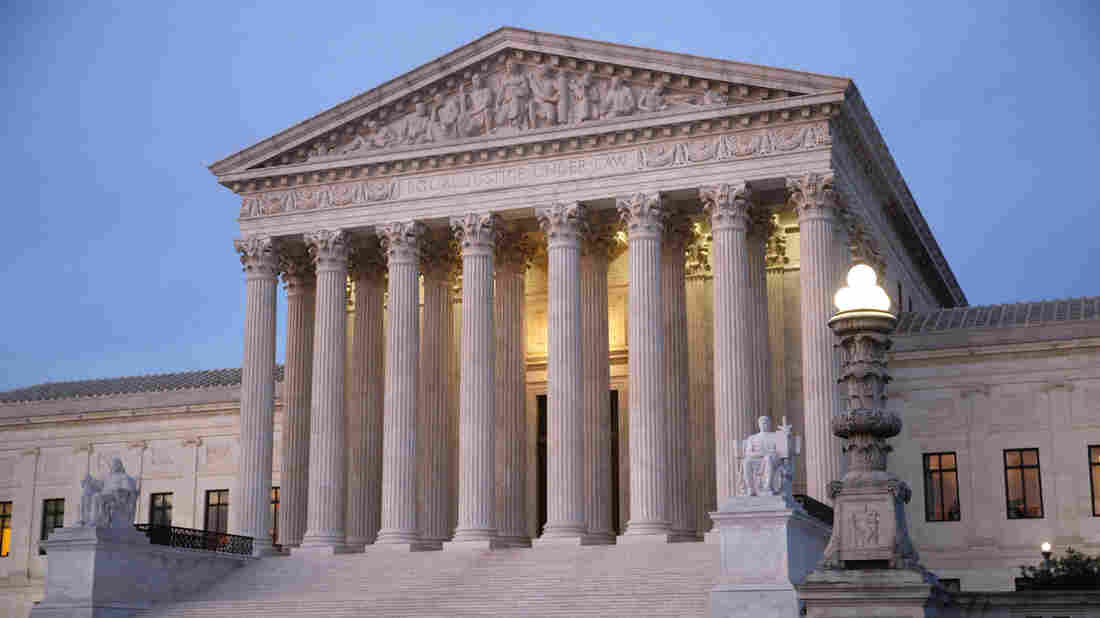 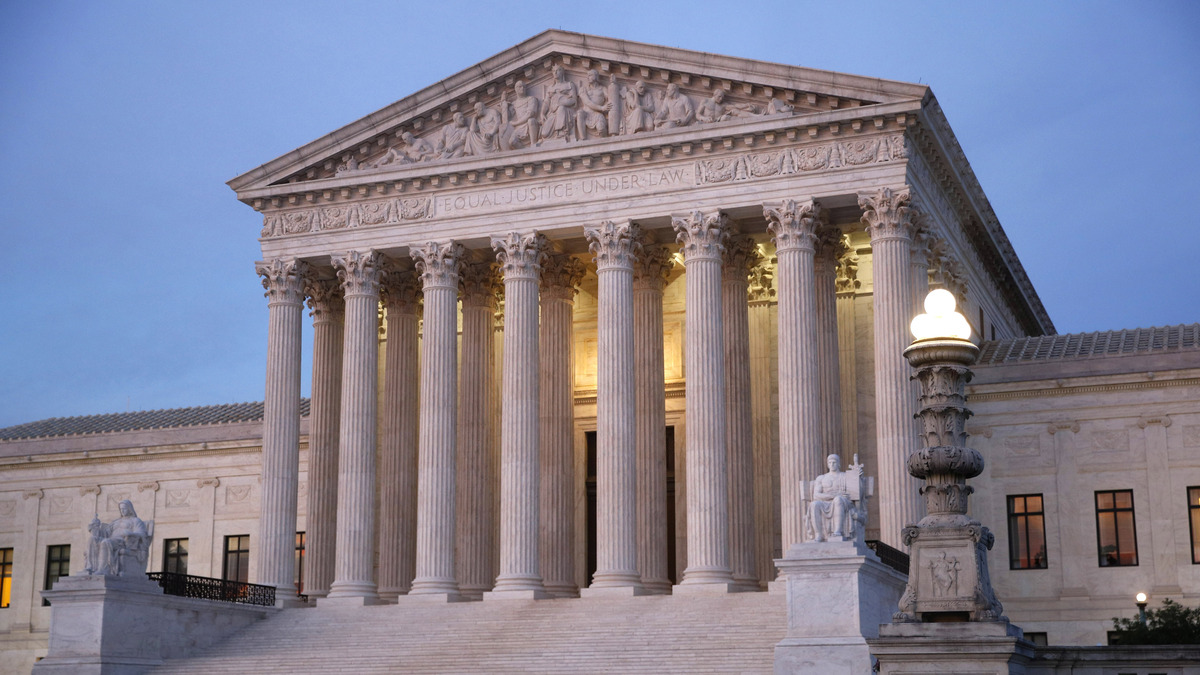 A sharply divided court first ruled that the parents of a Mexican boy fatally shot by a U.S. Border Patrol agent cannot sue the officer who killed their son. Then, the court heard arguments in a free-speech case that will determine whether people who encourage illegal immigrants to remain in the country can be prosecuted.

In 2010, 15-year-old Sergio Hernandez and his friends were playing chicken at the U.S. Mexican border, running up and touching the border fence, and then running away and hiding. Video of the scene shows Sergio peeking out from behind a railroad trestle on the Mexico side, as Agent Jesus Mesa Jr. points a gun, fires and kills the boy.

When the U.S. government declined to prosecute the agent or turn him over to Mexican authorities to face murder charges there, the boy's parents sued the agent for damages, contending that he violated the U.S. Constitution by depriving Hernandez of his life.

The suit was brought under a 1971 Supreme Court ruling that allowed such damage claims against officers who act in bad faith.

The panel of the 5th Circuit Court of Appeals found that no reasonable officer would have done what Mesa did under the circumstances, but the full appeals court said that it didn't matter whether Mesa had acted unreasonably, his parents couldn't sue because Hernandez was standing on the Mexican side of the border when he was shot.

On Tuesday, the Supreme Court threw out the suit entirely and went much further, cutting the heart out of much of the court's 1971 decision.

The vote was 5 to 4, with the court's conservative justices refusing to allow damage suits for cross-border shootings and the court's liberal justices castigating the court's majority for giving a free pass to the "rogue actions" of law enforcement officers.

Writing for the conservative court majority, Justice Samuel Alito said that in essence, the court has come to realize the folly of its earlier decision and has thus sought to limit its effect.

"A federal court's authority to recognize a damages remedy must rest at bottom on a statute enacted by Congress," he wrote, "and no statute expressly creates [such] a remedy."

Alito said there is "a world of difference between" allowing damage claims that have been allowed in the past and a case like this one, in which, Alito maintained, there were foreign policy and national security issues at stake. Justice Clarence Thomas, joined by Justice Neil Gorsuch, would have gone further and outright overturned the court's 1971 decision and others that followed in its wake.

In A First, Border Agent Indicted For Killing Mexican Teen Across Fence

Writing for the dissenters, Justice Ruth Bader Ginsburg said that "using lethal force against a person who poses no immediate threat to the officer and no threat to others surely qualifies as an unreasonable" invasion of an individual's constitutional rights. It should not matter "one whit" that the boy was standing on the Mexican side of the embankment, not the U.S. side, she added.

Mexico perceives cross-border shootings like this one to be a "persistent problem." The Mexican government, in a brief filed with the Supreme Court, cited U.S. Customs and Border Protection's own statistics showing that its officers reported use of deadly force involving firearms over 200 times through October 2018, with nearly all of the deadly shootings near the U.S.-Mexico border, and "many killings that involved shots fired across the border."

A separate investigation conducted by the Arizona Republic revealed that border patrol agents and CBP officers "killed at least 42 people," all but four of whom were killed along or near the Southwest border between 2005 and 2013.

Robert Hilliard, who represents the Hernandez family, was more than disappointed by the ruling, telling NPR that "the path to justice apparently does not travel as far as a bullet."

The First Amendment and immigration advocacy

After the announcement of the ruling in the Hernandez case, the Supreme Court moved on to hearing arguments in another immigration case, but this one involved the First Amendment right of free speech.

At issue was a statute that makes it a crime to encourage or advise immigrants in the country illegally to stay. Critics say the law could ensnare grandparents, ministers, lawyers and human rights activists.

Between 2001 and 2008, she collected more than $3 million from clients applying for an adjustment of their immigration status. The adjustment program, however, had ended in 2001, so the clients she applied for were not actually eligible.

Sineneng-Smith was subsequently convicted of mail fraud, tax violations and of illegally encouraging or inducing an alien to remain in the U.S.

It was this last conviction — for encouraging undocumented people to stay in the U.S. — that was before the Supreme Court on Tuesday.

The 9th Circuit Court of Appeals threw out that conviction, finding it to be a violation of the First Amendment's free speech guarantee. Both liberal and conservative advocacy groups have urged the Supreme Court to follow suit, contending that the statute is so broad that it encompasses lots of perfectly legal expression.

What about "a grandmother whose granddaughter is in the United States illegally" and "tells [her] granddaughter ... 'I hope you will stay'?" asked Chief Justice John Roberts. Would that grandmother be at risk of federal prosecution?

"What about a charity?" followed up Justice Brett Kavanaugh. If it's a charity that "provides food to someone who's in the country unlawfully ... is it covered under the statute?"

Feigin acknowledged that it was possible conduct of that sort "might violate the statute" but added that there was no instance of it actually being used in that way.

Justice Sonia Sotomayor followed up: "It has been used" to create "a watchlist at the border" for "charitable organizations, people who were giving legal advice at the border ... because they potentially violated this encouragement provision." And, noted Sotomayor, there was a prosecution in the case of a woman who advised her housekeeper that "if you return to your home country, you may not get back."

Justice Gorsuch noted that being in the country illegally is not itself a crime, so why is encouraging someone to stay a crime?

Arguing on behalf of Sineneng-Smith, the defendant in the case, lawyer Mark Fleming faced a grilling from Alito who wanted to know whether there is any kind of encouraging speech that could be criminalized.

For instance, what if a bullied and depressed teenager calls up a friend to say he is going to kill himself, and the friend says, "I'm tired of hearing this from you ... you're a coward, why don't you just do it ... pull the trigger"?

Asked Alito, "Is that speech protected by the First Amendment?"

No, replied Fleming, because that is inciting imminent harm, which the Supreme Court has said is not protected.

Addressing the government's argument that the statute is not really used to prosecute most speech, Fleming told the justices that while the statute has historically not been used much, the Trump administration has "recently made it a focus of enforcement."

Building on Sotomayor's point about government watchlists of charitable organizations and lawyers working at the border, Fleming noted that should the court uphold the law, it could soon be used against "U.S. citizens for their prayer, for their speech, and for their legal advice."