Accessibility links
Asian American Racial Trauma Is Laid Bare In 'Minor Feelings' Cathy Park Hong's essays serve as a major reckoning, pulling no punches as the author uses her life's flashpoints to give voice to a wider Asian American experience, one with cascading consequences. 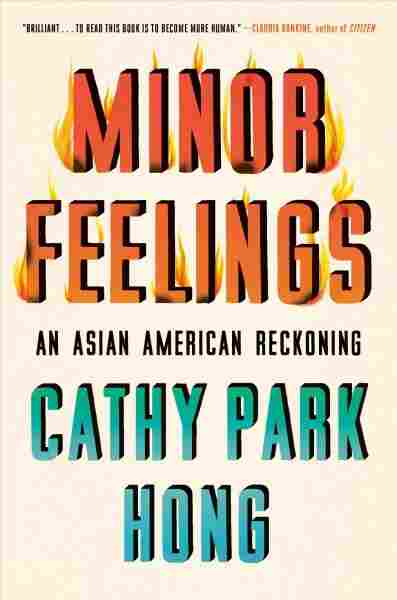 Halfway through her debut essay collection, Minor Feelings, author and artist Cathy Park Hong makes clear her mission: "I have some scores to settle ... with this country, with how we have been scripted."

"The lie that Asians have it good is so insidious that even now as I write," she notes, "I'm shadowed by the thought that I didn't have it bad compared to others. But racial trauma is not a competitive sport."

To explore her own trauma and a collective one, the pieces span the influential experiences of the author's own life — from a rude awakening in America after emigrating from South Korea as a child, to a complex relationship with the English language, to deep friendships forged among other artists in college, to her present-day life as a writer and mother.

Throughout, Hong retraces the history of how the idea of "Asian American" came to be, how we got conscripted into being the "model minority" in service of white folks' politics. And she underlines the consequences of this role, in which we're not the dominant whites, not the violently oppressed blacks, but instead struggle with "minor feelings" as we face the disorienting scripts written for Asians in American society: our "go along to get along" submissiveness and perpetual interchangeableness. (Who among us hasn't been confused for the one or two other people of color in the class? Or newsroom?)

The essays "United," "Bad English" and "The End of White Innocence" most pointedly make her case, reminding us that Asians occupy a purgatory of racial trauma that perhaps many don't even realize exists, since "most white Americans can only understand racial trauma as a spectacle" and not the quiet, persistent pain of containing yourself and your consciousness, whether it's to fit into the box created by a white-dominant society or the box of your elder generations' expectations.

Hong's lived experience schooled her in the pain of being a nonwhite American. She summoned it and added a layer of rich research and critical analysis to school the rest of us on that perspective. Because the thing about racism is, most of the time, it's not expressed violently. Instead, the way many Asian Americans experience it is in its polite or evolved form. Under the cloak of acceptance and inclusivity, you're repeatedly reminded you "speak English so well" or are assumed to be submissive or meek — notions that persist when a white colonialist history runs through the 20th century and ignorance remains a constant.

The effect for many of us, as Hong writes, is a dizzying disorientation, an inability to see oneself clearly. She argues that many Asian Americans have defaulted to seeing ourselves through the lens of the majority race and believing the lies told about Asians.

Long before the word "woke" came into our consciousness (and invited a backlash), several notable Asian Americans already understood this point. Part self-exploration, part cultural criticism, the book's seven essays introduce (or reintroduce) us to Asian American artists and activists and their oft-overlooked work.

Fiction readers of Jhumpa Lahiri's or Ken Liu's stories will be familiar with the immigrant experience gap — our parents survived famine and war while my (millennial) generation gets the privilege of struggling with self-actualization, seemingly frivolous by comparison. But what Hong makes clear in Minor Feelings is the trauma of our parents or grandparents winds up written in us one way or another, and perhaps in our collective shame, irrespective of our parents' intentions. As "American" as she — or I — know ourselves to be, we continue living in the gaze of a country or companies or schools run by white leadership and, more importantly, norms set by white perspectives. Can that ever be overcome? Well, not if it's not even understood, as we're reminded, in this courageous collection.

"It is not whiteness but our contained condition that is universal, because WE are the global majority," she argues. "By WE I mean nonwhites, the formerly colonized; survivors."

For non-art history majors, parts of the book may feel too theoretical or inaccessible since Hong, a decorated poet, has clearly spent her adult life in the shorthand of other creatives. And a sojourn into her time at Oberlin College left me unsatisfied, because I kept wondering, wait, what really happened to a key character?

But ultimately, Minor Feelings is a major reckoning, pulling no punches as the author uses her life's flashpoints to give voice to a wider Asian American experience, one with cascading consequences. So many of us know what it is to cringe over our parents' foreign-accented English. Or feel self-conscious about being among several other Asians in a room — will we be confused for one another? Will too many of us scare people off? It's a burden to internalize that, especially when "none of the white kids felt self-conscious about the fact there were so many of them."

But just as the author reminds us, that pain that trolls your nerves can detach from your body once you talk about it. Hong is naming the pain. And that's something.