Accessibility links
Schools Are Embracing Mindfulness, But Practice Doesn't Always Make Perfect One in 5 American children struggles with anxiety. To help students cope, more and more schools are turning to mindfulness — but the explosion of interest has some researchers advising caution. 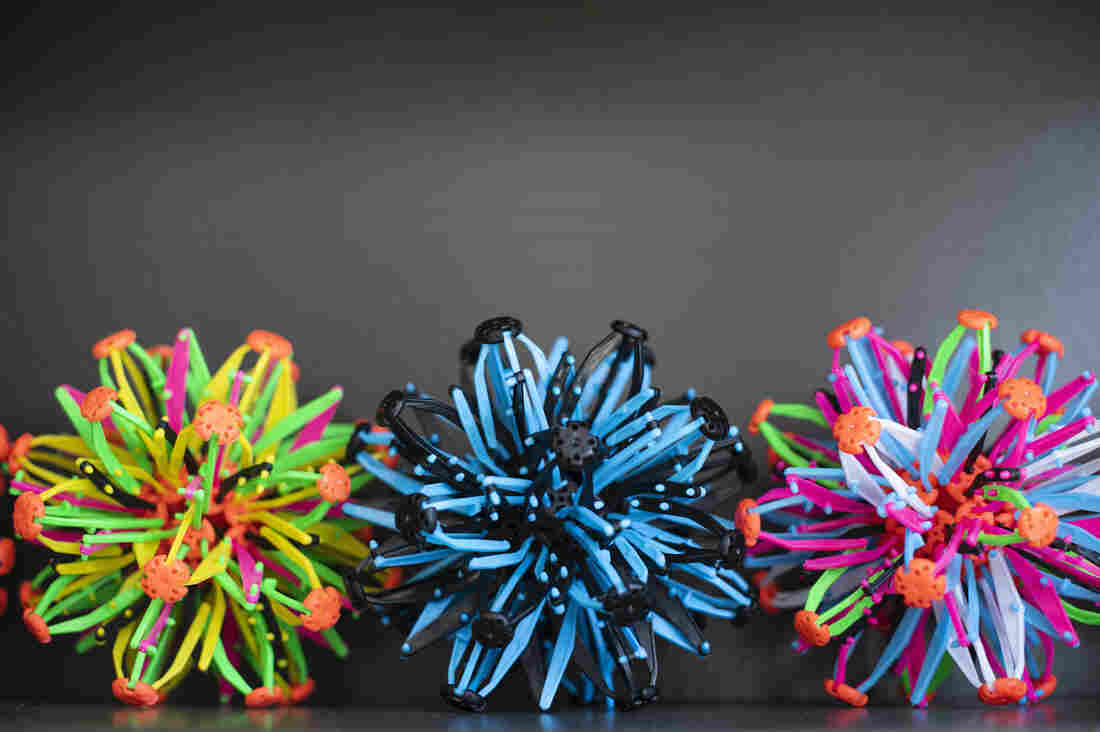 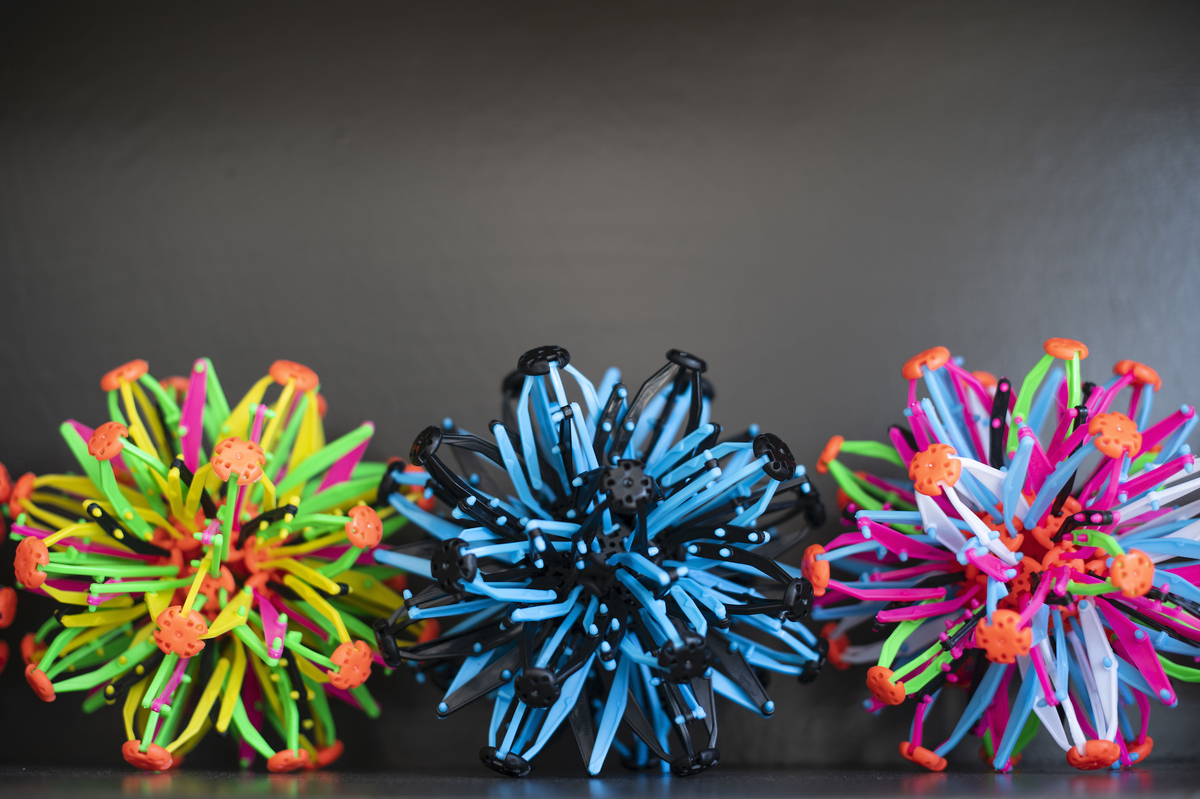 When kids at Warner Arts Magnet Elementary School act up, they aren't sent straight to the principal's office. Instead, many students at the high-poverty school in Nashville, Tenn., go to the "BeWell" room.

The serene space is awash in sunlight and brimming with plants. There are yoga mats, toys, a lounging nook and soothing music drifting out of a desk speaker. In this room, teacher Riki Rattner, who is also trained as a yoga instructor, helps students practice deep breathing and check in with their emotions.

"Let's get you checked in and calming down. Taking care of you," she tells a fourth grader who walks in after a tiff in art class.

One in 5 American children struggles with anxiety, according to the National Institute of Mental Health, and almost half experience at least one serious stressor at home — like divorce, poverty or a parent's addiction — according to the nonprofit Child Trends.

To help students cope, a growing number of schools like Warner are turning to mindfulness. Its boosters claim all kinds of benefits, and there is research to back them up. But mindfulness in schools can mean many different things, and the explosion of interest has some researchers and proponents advising caution.

"Mindfulness when delivered in a high-quality structured program can be beneficial for youth," says Erica Sibinga, a professor of pediatrics at Johns Hopkins School of Medicine. "We can't immediately assume it's effective when delivered in other ways."

Mindfulness is a bit of a catch-all term for a secularized version of practices that draw from religions like Buddhism and Hinduism. It might include things like focusing on the senses, deep, regular breathing and mental exercises designed to promote awareness and kindness.

In schools, mindfulness has taken many forms, from intensive curricular programs, to professional development for teachers, to an occasional behavioral respite. Some for-profit companies advertise videos and audio tracks meant to be played to children for as little as five minutes a day; others market toys and gadgets. For example, at Warner, Rattner uses an expandable ball to demonstrate deep breathing and a liquid motion bubble timer filled with colorful oil to help students calm down. 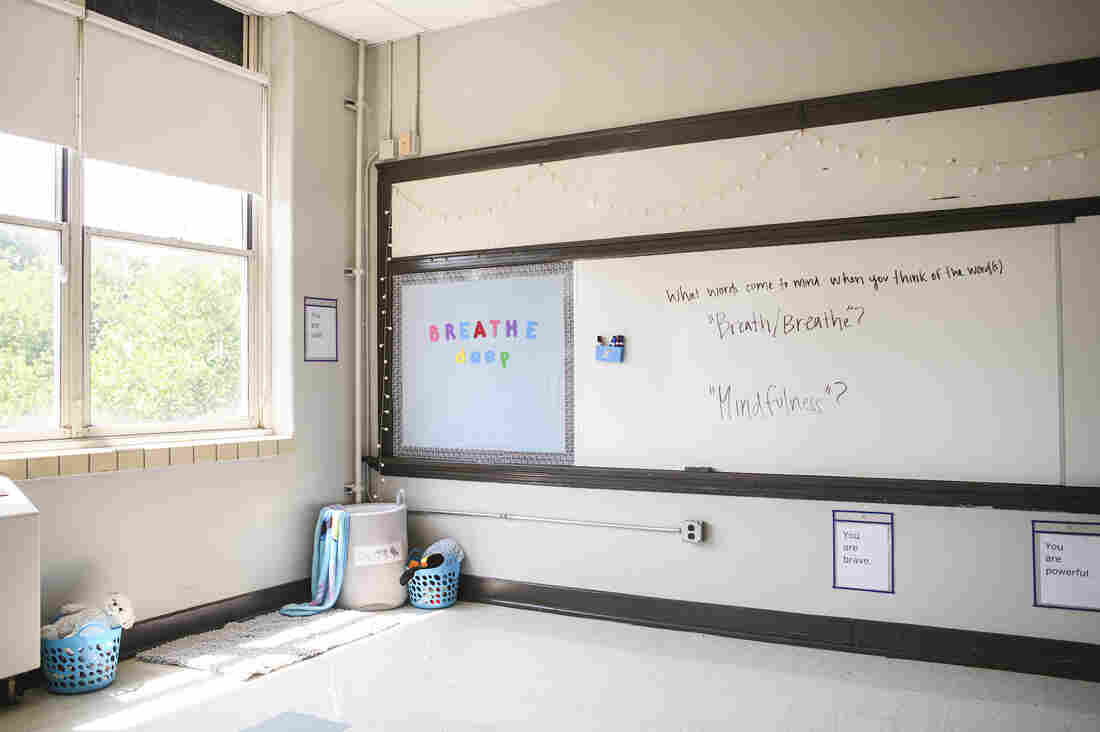 The BeWell room at Warner Arts Magnet Elementary School is a quiet, contemplative place for students to tap into their breath and work on mindfulness. William DeShazer/WLPN hide caption 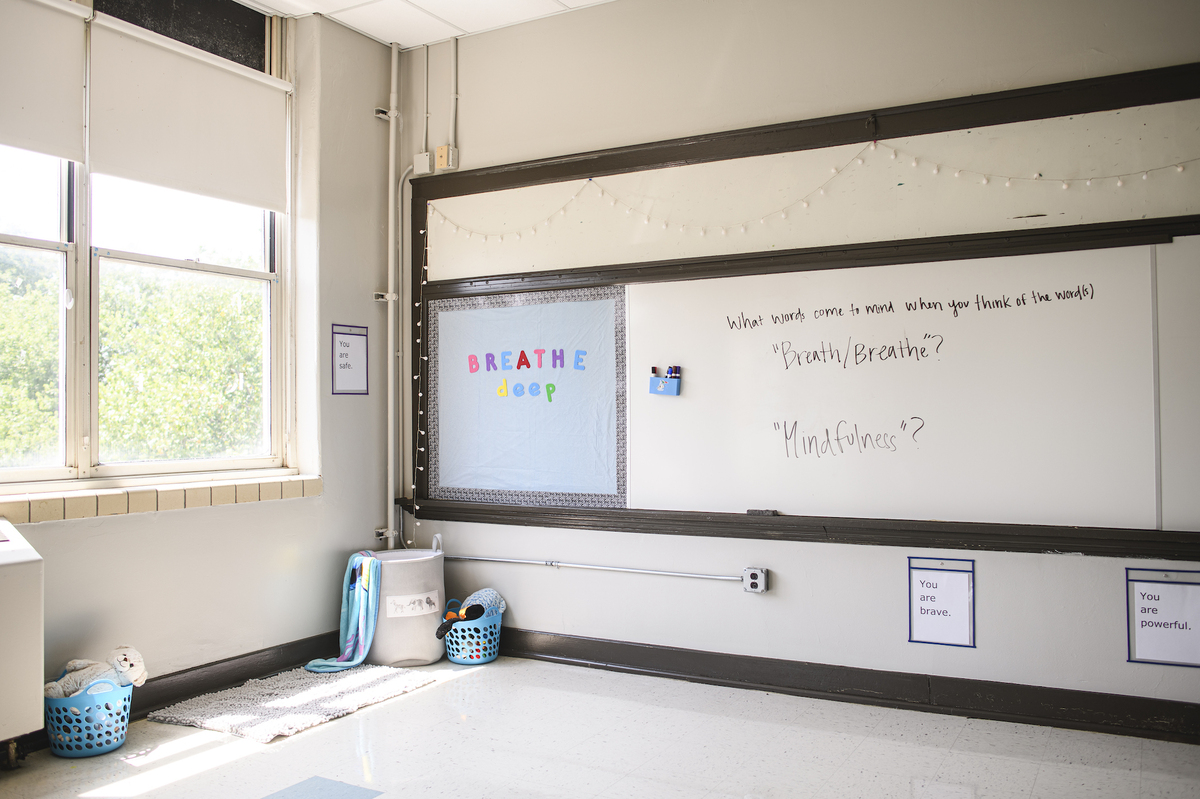 The BeWell room at Warner Arts Magnet Elementary School is a quiet, contemplative place for students to tap into their breath and work on mindfulness.

But Tish Jennings, an education researcher at the University of Virginia says buyers should beware.

"There's people out there that have good intentions, and they're really trying to support schools, but they may not have the evidence behind what they're doing."

Almost 90% of Warner students live in poverty, and many come to school carrying trauma and other troubles that affect their behavior and ability to focus. The mindfulness program, which began this school year, is one way Warner is trying to address those challenges. In addition to one-on-one sessions with students, Rattner also hosts yoga classes and provides classroom support. And twice a day, Principal Ricki Gibbs leads school-wide breathing exercises.

When Schools Meet Trauma With Understanding, Not Discipline

"We've given them avenues to work on mindfulness," Gibbs says, "to work on just calming themselves, getting to their center place where they can just be children."

Gibbs may be seeing results, but there's little research behind mindfulness programs like his. And the programs that have been studied — and proven effective — take a lot more time than what's being done at Warner. 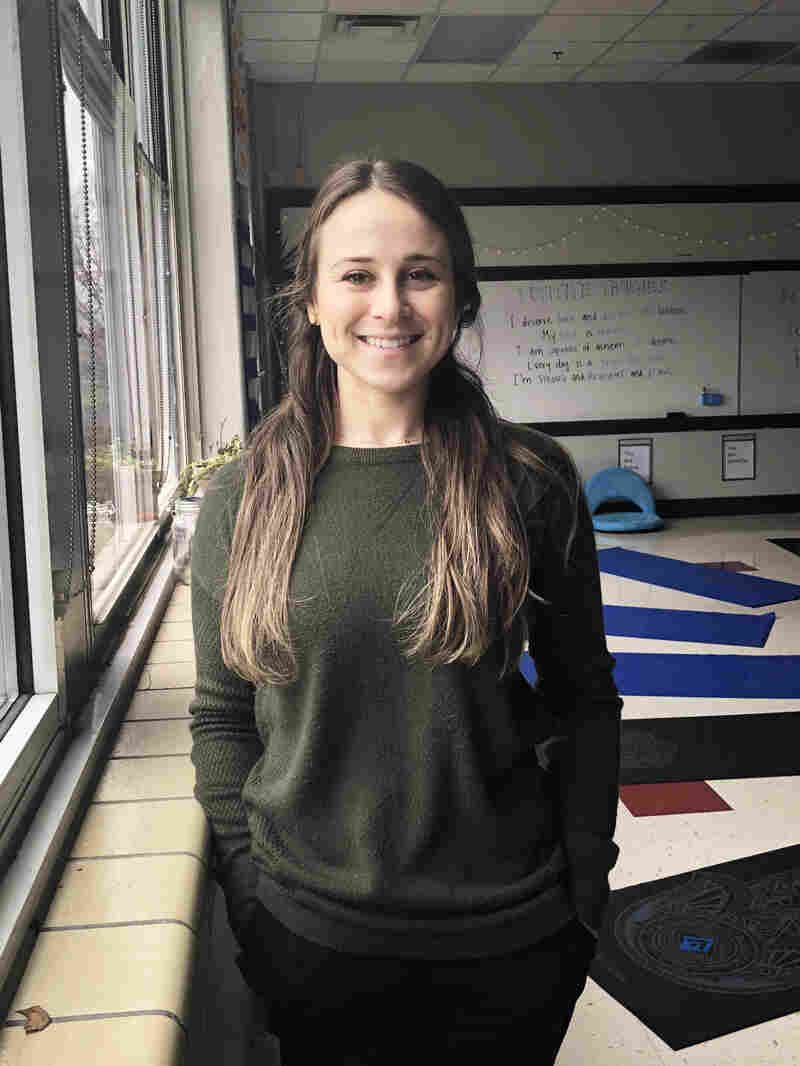 Rattner is also a trained yoga instructor. The mindfulness program she leads at Warner aims to curb behavior issues and reduce stress by teaching children to slow down and breathe. Meribah Knight/WLPN hide caption 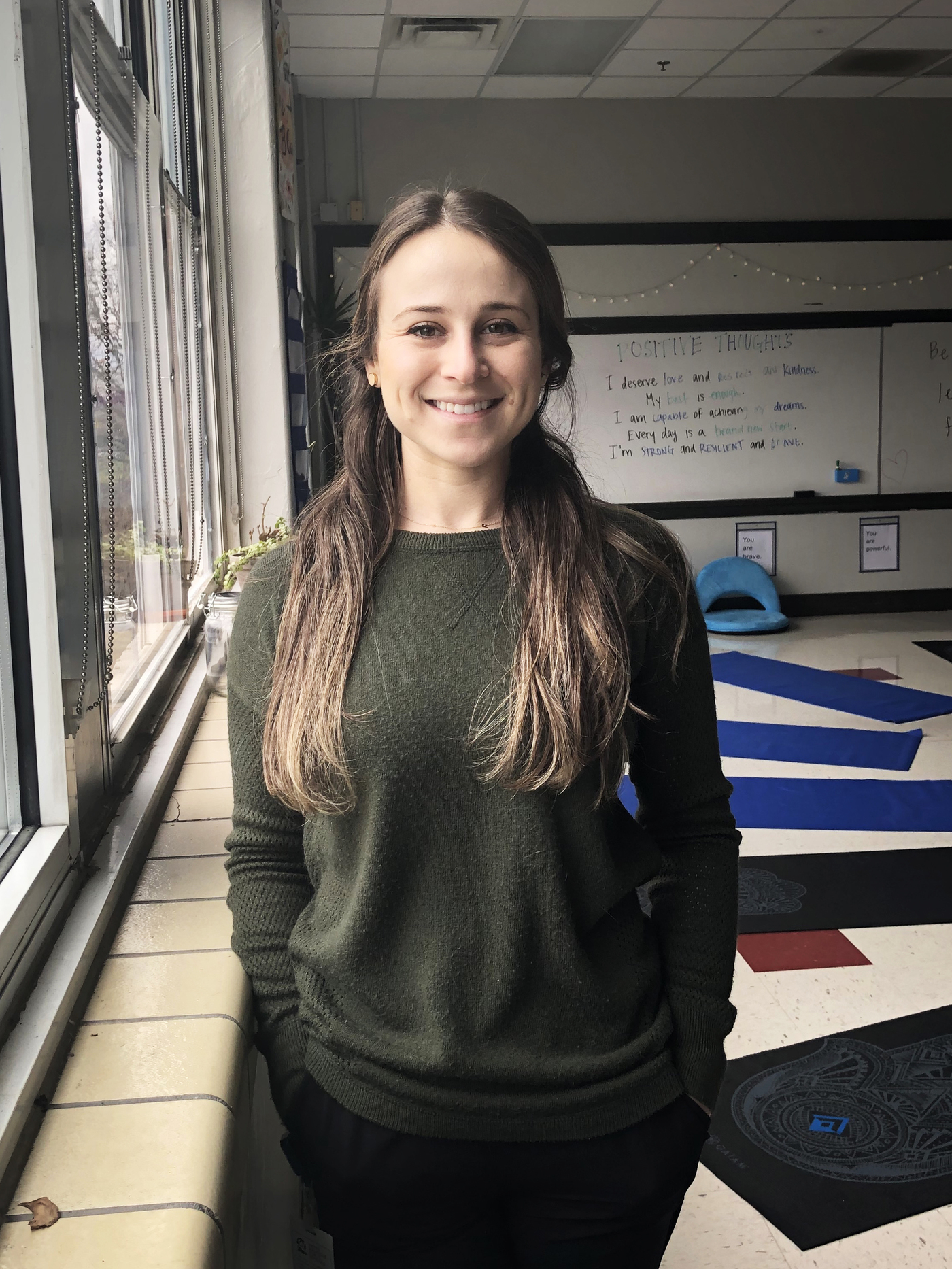 Rattner is also a trained yoga instructor. The mindfulness program she leads at Warner aims to curb behavior issues and reduce stress by teaching children to slow down and breathe.

Most of the clinical research on mindfulness has centered on Mindfulness Based Stress Reduction, a specific protocol created in a medical school. It draws from traditional Buddhist meditation practices, but secularized and standardized. MBSR for adults is fairly intensive: It typically takes place over the course of eight weeks, for two or two and a half hours per week, plus an all-day retreat.

Studies have found that MBSR improves both chronic pain and the body's immune response. And there are significant mental health benefits: For adults, across populations, this protocol has been shown to have a similar effect as antidepressants.

Sibinga at Johns Hopkins has published several studies on the efficacy of mindfulness for children and teenagers, particularly those who cope with significant stress and trauma. In the studies, which Sibinga designed, the training consists of 12 weekly sessions of 50 minutes each — a significant amount of instructional time at any school. Some of the language has been simplified or made less abstract for young people, but it's still very much based on MBSR, she says. And, it works.

"We see mental health benefits," Sibinga explains. "We see some behavioral benefits. Youth are more likely not to engage in conflict — more likely to walk away from contentious discussions. They express greater acceptance of themselves."

Jennings at the University of Virginia has taken a different, in some ways even more intensive approach. She believes successful mindfulness programs should include adults as well as the children in a school, and they should be integrated with a schools' approach to discipline and social and emotional learning.

Jennings co-created a program called CARE, which provides intensive mindfulness training for teachers. Randomized controlled trials show the program is effective not only in improving teachers' well-being, but also in improving the classroom environment as teachers become more centered and less reactive to stressful situations.

Jennings says the programs that are backed by the best evidence are "doing a really good job of fitting into the school system in a way that the teachers and students can use. It's not being plugged in or added on. It's building a new climate in the school where everyone" — from the principal to the bus driver — "is approaching what they're doing with a more mindful and compassionate approach."

She's currently studying a district-wide program in Louisville, Ky., that is trying to do just that.

In the United States, mindfulness has long been associated with white, affluent and highly educated people, as well as with the technology industry and the corporate world. As its use spreads in schools, and as researchers like Sibinga focus specifically on how it can help children who face trauma and adversity, experts like Tiara Cash are raising concerns about equity and inclusion. Cash is with the Center for Mindfulness, Compassion and Resilience at Arizona State University, an organization that works to promote what she calls "equitable mindfulness" to diverse communities in culturally specific ways.

Statistics show, in schools across the country, black and Hispanic students are disciplined more often and more harshly. Cash says it's possible that a given student is feeling angry or disruptive because teachers really do show implicit bias — and mindfulness isn't going to fix that underlying problem.

She says that while it is helpful to give a student a chance to process difficult emotions that come up in class, mindfulness would be better used to allow teachers to interrogate and eliminate their own implicit biases.

"What we're really trying to do is elevate the understanding that, you know, with our own personal practices, with our own sitting with ourselves, we're able to break down these barriers better."

Because of that, Cash, like Jennings, says it's hard to do mindfulness effectively unless teachers walk the talk. And that, of course, takes a holistic approach, with lots of resources, time and support — three things that are often in short supply in the nation's schools.