Accessibility links
Microsoft, Delta, BP, Ikea - Big Corporations Make Big Promises On Climate Pressure is mounting on CEOs as everyone from investors to employees sounds the alarm about the climate crisis. Some companies are responding, but even ambitious targets won't be enough on their own. 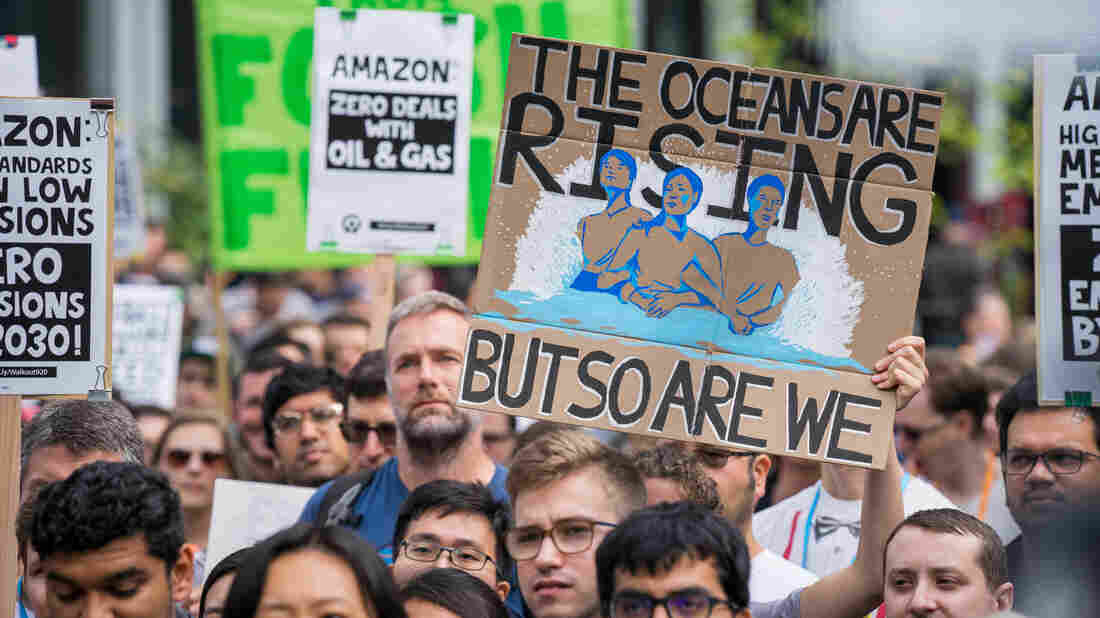 A protester holds a sign reading "The Oceans Are Rising But So Are We" at an Amazon employee walkout in Seattle, as part of the Global Climate Strike on Sept. 20, 2019. At some companies, employees are putting increasing pressure on their bosses to act on climate change. Chloe Collyer/Bloomberg via Getty Images hide caption 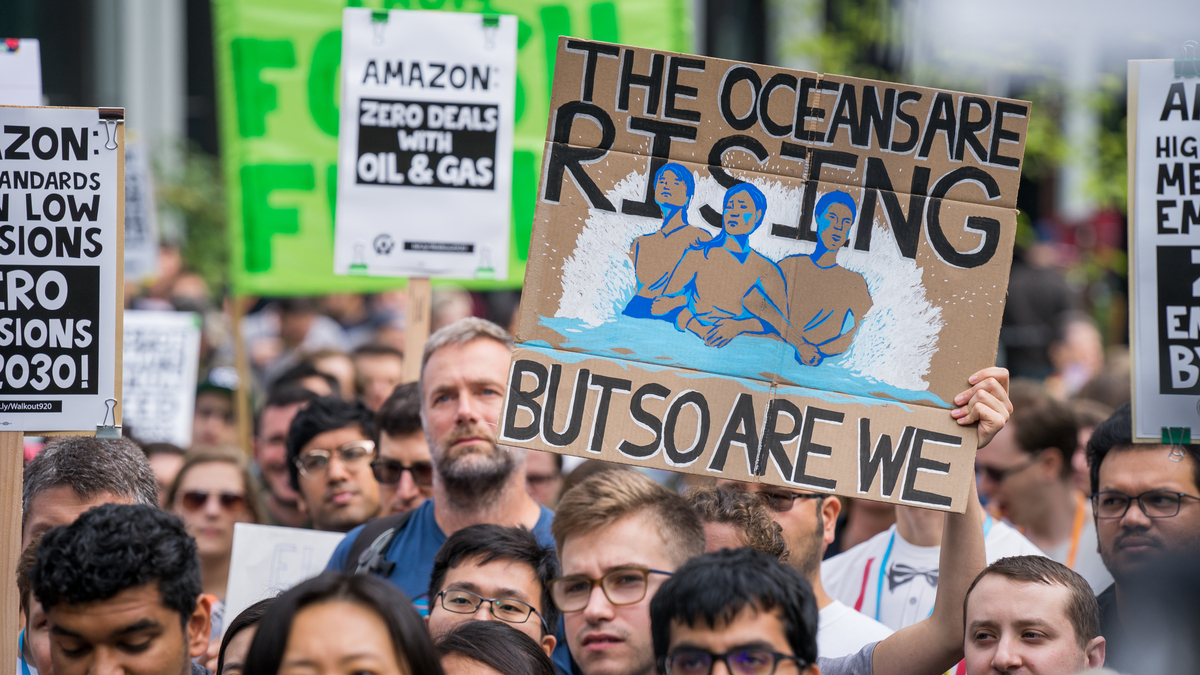 A protester holds a sign reading "The Oceans Are Rising But So Are We" at an Amazon employee walkout in Seattle, as part of the Global Climate Strike on Sept. 20, 2019. At some companies, employees are putting increasing pressure on their bosses to act on climate change.

Microsoft and Ikea, behemoths of tech and furniture, have pledged to go further and actively reduce the carbon dioxide in the atmosphere. The financial giant Blackrock promises to put climate at the heart of its decisions.

In short, a slew of major corporations are making promises on climate — lofty ones.

And it's not just a case of a few headline-grabbing outliers.

More companies are disclosing their carbon emissions, and more of those companies have emissions reductions targets, according to the global nonprofit CDP (formerly the Carbon Disclosure Project).

Those targets are also more ambitious. Engie Impact, a sustainability company tied to a French energy group, analyzed CDP data and found "the intensity of the commitments is rising," as Engie Impact's Mathias Lelièvre puts it.

Companies are promising faster action, too. Instead of setting goals 25 years in the future — a distant target that makes accountability difficult — the average time horizon is now just eight years away, Engie Impact found.

And there's been an acceleration in the rate at which companies set "science-based targets" — specific, measurable carbon reduction goals that put a company in line with the Paris Agreement, the global climate accord aiming to hold warming at 2 degrees Celsius or lower. Coca-Cola, Nike, Best Buy, Walmart and Hilton Hotels are among the hundreds of companies with such targets.

According to one analysis, the number of Fortune 500 companies with concrete, ambitious carbon targets quadrupled in the past four years, to 23%.

This increase in activity comes after decades of pressure from environmental advocates — and despite a lack of action from the U.S. government.

So after all this time, what might be spurring companies to set new or newly ambitious targets?

For one thing, the effects of climate change are becoming clearer to companies as wildfires, rising sea levels, droughts and other symptoms of the crisis make headlines and affect business operations. "It's here," says Bruno Sarda, the president of CDP North America. "It's happening now, not tomorrow."

At the same time, solar and wind energy have gotten significantly cheaper, making it easier for some companies to commit to shifting away from fossil fuels.

And an increase in pressure — on multiple fronts — plays a key role.

"Investors are increasingly asking companies about this," says Kevin Moss, who runs the center for business sustainability at the World Resources Institute. "And not just the traditional activist investors who have been doing it for some time, but mainstream investors."

Pressure from customers and the general public is mounting, too, as public awareness and concern grows more intense. And while the federal government in the U.S. has backed away from climate targets, cities and states — not to mention governments abroad — are taking action.

There might be some more surprising sources of pressure, too. Children.

"I hear from business leaders all the time today that, you know, their kids come home and say, 'What are you doing, Dad?' " says Elizabeth Sturcken, a managing director at the Environmental Defense Fund who works with businesses on sustainability goals. "This makes a difference."

Employees, too, are increasingly influential. Workers at companies such as Amazon are pushing their bosses to change, and some other companies see this as a way to attract and retain talent.

Kyum Kim is the co-founder of the app Blind, where tech workers discuss their workplaces, and he says those workers are increasingly discussing issues like climate change. In a survey, half his users said a company's climate policy affects whether they want to work there.

"People talk a lot about compensation, of course, and the work culture," he says, "but I think this is a whole new segment."

There's another factor, too, according to Lucas Joppa, the chief sustainability officer at Microsoft.

He says it helps to frame climate action as an accounting problem, based on quantifying exactly how much companies emit and how much they'll need to cut.

"That really is what I see flip executives' mindsets around, is to just talk about this in terms that they understand ... a climate 'budget,' " Joppa says. "At the end of the day, what companies are really good at doing is making decisions based on numbers."

The limits of voluntary targets

Of course, setting a carbon budget is one thing. Sticking to it is another. Some climate announcements in the past — such as BP's previous rebranding as "Beyond Petroleum" — have been more PR push than actual shift in strategy, and advocates agree that follow-through and accountability will be essential if these new ambitious targets are to have an impact.

And even if companies make good on their promises, some experts say there can be a danger in relying on big corporations to drive the fight against climate change.

Shalanda Baker, a professor at Northeastern University who studies the social justice dimensions of a transition away from fossil fuels, says vulnerable and marginalized communities need to have input in how the world fights climate change — and feel the benefits of a switch to green energy.

"I'm just not sure if I have the faith, given that ... corporations are very concerned about expenses and profits, that they would really think about something that may add cost, but that may be more just," she says.

Baker says corporate action can be powerful but government policy can make sure vulnerable populations are protected.

She's not the only one who looks at these voluntary commitments and sees a need for regulation. After all, some companies taking action is nowhere near enough to stop climate change.

Elizabeth Sturcken at the EDF, who has spent two decades urging companies to act, tells companies that in addition to voluntary cuts in emissions, it's critical for business leaders to engage with policymakers and ask for government action.

Corporations from BP to PepsiCo say they support a price on carbon, one market-based policy for reducing emissions. Sturcken says companies that really want to lead on climate need to put money toward making such policies a reality.