Accessibility links
Review: 'The Hidden Girl And Other Stories,' By Ken Liu Ken Liu is an acclaimed author, translator and poet who's won multiple awards for his short fiction. But his new collection doesn't come together — some stories are gorgeous, while others fall flat.

'The Hidden Girl' Is Smart, But Not Entirely Human

'The Hidden Girl' Is Smart, But Not Entirely Human 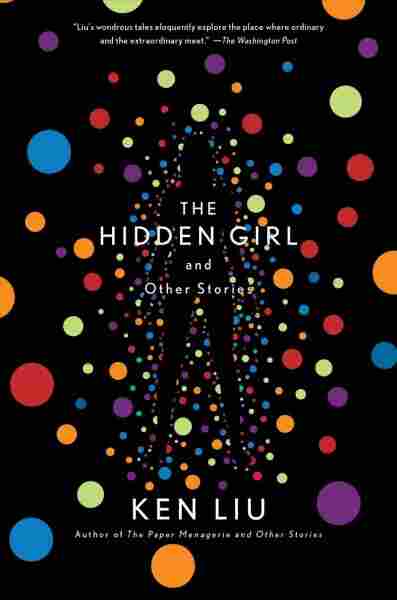 The Hidden Girl and Other Stories

Title
The Hidden Girl and Other Stories
Author
Ken Liu

Ken Liu does a lot of things as a writer. He creates big, doorstopper novels of his own (the Dandelion Dynasty series), and translates works from some of the best Chinese genre writers working in that language (Liu Cixin, Hao Jingfang, others). He writes books about Luke Skywalker and does travel pieces on Shanghai, wrote an essay that became a ballet, writes articles poetry. He is busy.

And when he's not doing any of that, Liu writes short stories. Lots of short stories. He has won just about every award there is to win for short speculative fiction, and the namesake story that beat as the heart of his 2016 collection, The Paper Menagerie, took home the sci-fi triple crown, winning the Hugo, the Nebula and the World Fantasy Award in 2012.

So yeah, I was excited when I got my hands on his second collection, The Hidden Girl, and cracked it open. I was expecting the same kind of deep, emotional connection. The same wild flights of imagination. The same spark of compressed magic that animates the best short fiction — the ability to conceive a universe writ in miniature, to tease out only those moments of it that matter most fiercely.

But The Hidden Girl ... is not that. It isn't even really a book of discreet short stories so much as a series of tightly interlinked, self-referential chapters of a distributed novel, broken up by diversions, digressions, thought experiments and a couple pieces that read like intellectual exercises in imaginary brand PR.

There's a three-story arc about artificial intelligence and the singularity ("The Gods Will Not Be Chained," "The Gods Will Not Be Slain" and "The Gods Have Not Died In Vain") that starts as a simple exploration about a daughter mourning her father and ends with an AI war, a scorched earth and a meditation on digitally native intelligences that have never known what it is like to live in the flesh.

No Paper Tiger, This 'Menagerie' Is Full Of Fierce Feeling

"Staying Behind" treads the same ground, only jumped forward in time to a point along the historical arc where a single company, Everlasting Inc., has developed the technology to upload human consciousness. It has the best opening line ("After the Singularity, most people chose to die."), the most rich and developed present, an argument/counterargument structure that Liu returns to again and again in this collection (with varying levels of success) but which, here, feels organic and rounded. The world it presents is slower, simpler, and largely de-populated of living humans, which provides an ideal setting for the friction that develops between parents and children who have radically different ideas of what of the old world is worth hanging on to and what "living" actually means when digital immortality becomes a viable option.

"Altogether Elsewhere, Vast Herds of Reindeer" goes even further, experimenting with clock cycles as time travel, the reality of forever contained within the promise of immortality, and the possibilities it presents when a mother — one of the "Ancients" who actually lived for some years as a person before uploading — chooses to send her consciousness into space to explore another planet, but only after spending a last 45-year-long "day" with her digitally-engineered daughter, trying to pass on to her what it felt like to once upon a time live in the real world and not a virtual one.

These linked stories are broken up by unattached tales that fall like partial non-sequiturs in Liu's larger conversation about family, memory and immortality. "Real Artists" is about algorithmic intelligence usurping the creative arts and, ironically, plays out in an incredibly predictable fashion, right down to the stinger at the end. "Byzantine Empathy" is a stilted, manipulative argument between two friends on the nature of charitable giving that reads like an extended infomercial for blockchain and cryptocurrencies.

There are beautiful moments in these stand-alone tales, to be sure. "Seven Birthdays" is like an exploded haiku, bookended by images of kites and flight, the reach of its vision and the broken hearts inside its messy utopian/dystopian future as full and real as its imagination is stunning. "Thoughts and Prayers" is an absolutely haunting vision of trolling and the gun control debate set 20 minutes in our broken future. And there is a way to read The Hidden Girl as a kind of academic exercise performed in public — Liu working out his own partially-formed ideas about humanity's potential future on the page, mixing and re-mixing elements, bundling them up with his favorite emotional arcs (aliens and immigrants, family and memory and history), banging notions together just to see what sticks.

'The Hidden Girl' just doesn't hang together as a complete collection. It meanders and repeats itself. It can't commit to a single tone, but can't arrange disparate ones into a sensible flow.

In that way, the collection's titular story, "The Hidden Girl," reads almost like the first chapter of an abandoned novel about Chinese myth and multi-dimensional assassins (and one of the other pieces, "A Chase Beyond the Storms," actually is an orphan chapter of something longer — a sneak preview of Liu's upcoming third Dandelion Dynasty novel). "Maxwell's Demon" becomes a (largely failed, clumsy, paradoxically cold) attempt at giving a narrative structure to mathematician James Clerk Maxwell's thought experiment about violating the second law of thermodynamics, and "Memories of My Mother" just a (largely successful) experiment in formatting, structure and the laws of relativity.

But as fun as such dissembling can be for those more interested in the way a writer's brain works than settling down with a good yarn, The Hidden Girl just doesn't hang together as a complete collection. It meanders and repeats itself. It can't commit to a single tone, but can't arrange disparate ones into a sensible flow. There are too many places where process overshadows character, or where Liu presents an argument clothed in threadbare narrative rather than a story that proceeds along the natural path of an argument. Like the rogue intelligences that skulk in its pages, The Hidden Girl is smart, sure. How could it not be?

But something about it feels not altogether human.