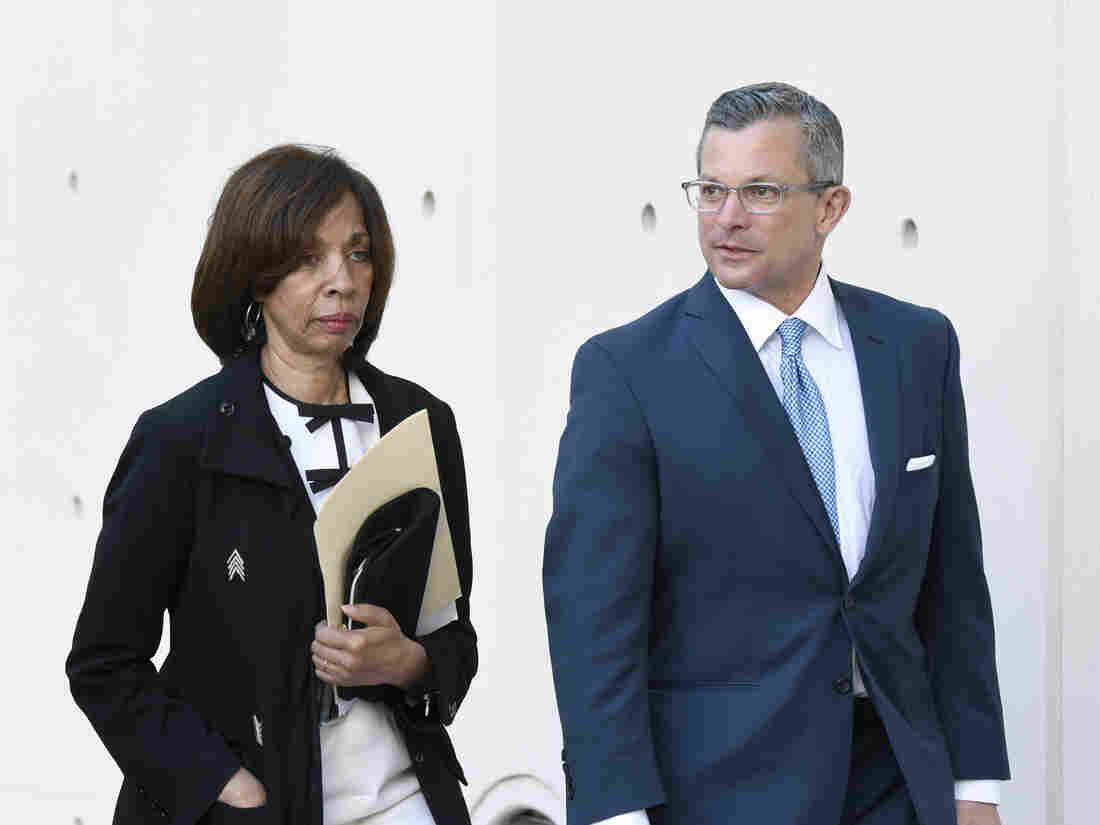 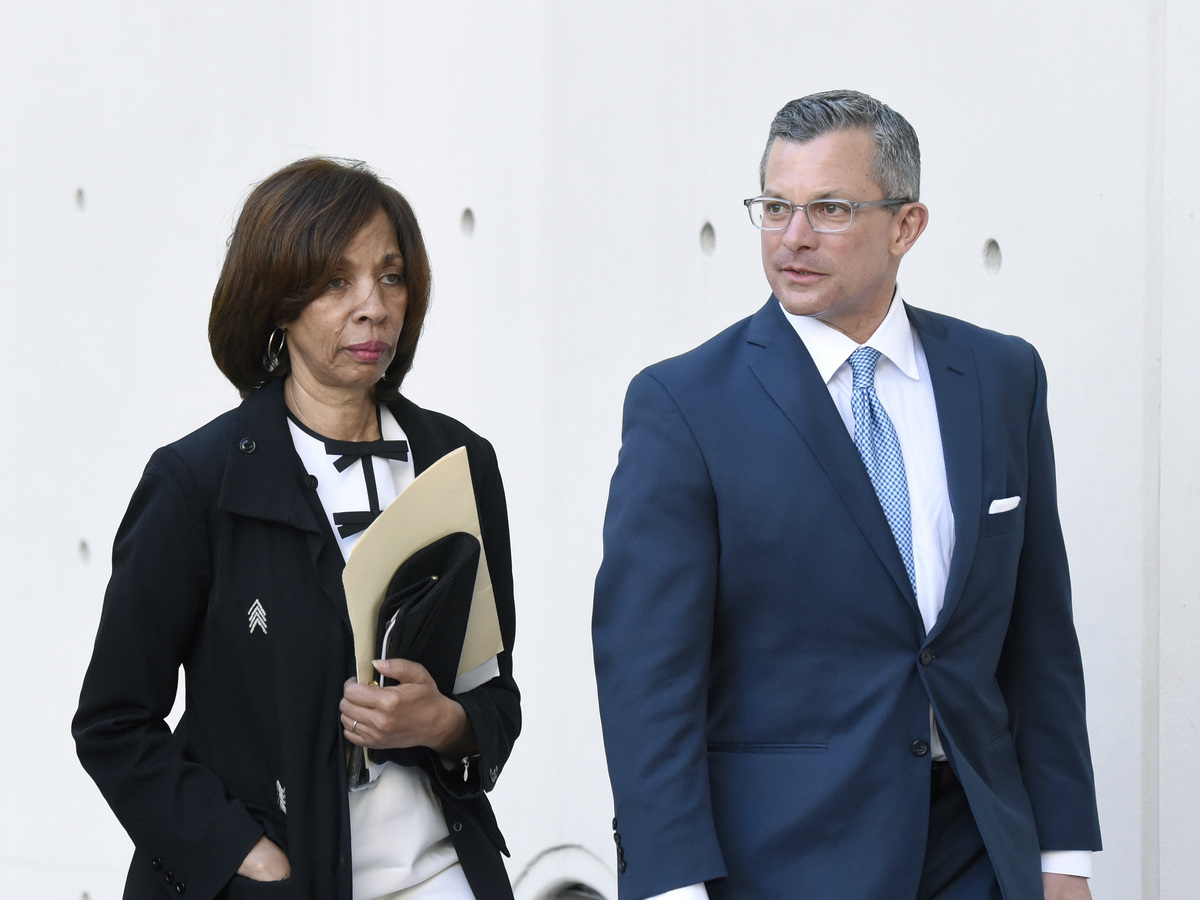 It was just months ago that she pleaded guilty to federal fraud, tax and conspiracy charges over a scheme involving sales of her self-published Healthy Holly children's books.

Prosecutors had been seeking a five-year prison sentence for the 69-year-old Democrat who has spent decades in Maryland politics. Pugh's lawyers, in turn, had asked the judge for a more lenient prison sentence of one year and one day, noting that she is a first-time offender and she entered a guilty plea.

In the end, neither side got its desired outcome, as reporter Emily Sullivan of member station WYPR tweeted.

BREAKING: Pugh will serve a 3 year sentence, somewhere in the middle of the 5 years prosecutors asked for and the 1 year 1 day her lawyers countered with

Once Pugh completes her prison sentence, she will serve three years of supervised release.

Pugh was "visibly stressed" Thursday when she walked into the courtroom, according to The Associated Press, which adds that she teared up at seeing a number of her friends in the courtroom.

Additionally, the court ordered restitution payments of $400,000 to the University of Maryland Medical System, where the former mayor once served as a board member. The medical system — one of the state's largest employers and one of Pugh's biggest customers — had agreed to enter a no-bid deal to purchase 100,000 copies of the books. The existence of the deal was first reported by The Baltimore Sun in March.

She'll also have to pay back some $12,000 to the Maryland Automobile Insurance Fund, which purchased books.

Pugh pleaded guilty in November to conspiracy to commit wire fraud, conspiracy to defraud the government and two counts of tax evasion.

Ahead of Thursday's sentencing, her lawyers submitted a 13-minute video to the judge in which she apologizes and says the nearly yearlong legal saga created a "ringing negativity" in the city of Baltimore.

"First, I want to apologize to the citizens, to young people, to partners, to my friends, everyone I've offended, everyone I've hurt and the city's image by pleading guilty and by being involved in all of this that has led me here today," Pugh says in the video, according to the Sun.

Pugh resigned as mayor in May 2019 as allegations of "self-dealing" in connection with the sale of thousands of copies of her Healthy Holly children's books engulfed her administration.

Prior to her resignation, federal investigators were looking into the book sales, many of which went to entities she had influence over or businesses that hoped to do business with the city and the state.

Prosecutors had accused Pugh of earning approximately $800,000 from the Healthy Holly book series, about an African American girl who promotes exercise and nutritious eating habits.

"But the problem was thousands of books that nonprofits and foundations ordered to distribute in schools and day cares to promote healthy choices and combat obesity were never delivered to the city's children," as NPR reported in November.

"Instead, authorities say she took books that were already purchased and resold them. Pugh then funneled those proceeds into her own political campaigns and used the cash to purchase and renovate a house in Baltimore."

In early April, Pugh took an "indefinite leave of absence" as mayor, citing health challenges as the reason. By then, the book scandal had already jeopardized her term in office.

That same month, federal agents with the FBI and Internal Revenue Service raided Pugh's home and offices at City Hall in connection with their investigation into the fraudulent book scheme. Hours after the raids, Republican Gov. Larry Hogan called for Pugh's resignation.

He said at the time: "Now more than ever, Baltimore City needs strong and responsible leadership. Mayor Pugh has lost the public trust. She is clearly not fit to lead."

She would remain in office for another week.

She was first elected to the Baltimore City Council in 1999 and won a seat in the Maryland Senate in 2007. She drew widespread praise during the unrest in Baltimore over the death of Freddie Gray, a young black man who died while in police custody in 2015.

Pugh, along with now-deceased Rep. Elijah Cummings, spent hours trying to quell distressed crowds in the streets of West Baltimore. She sang "This Little Light of Mine," according to the Sun, and told residents, "We are a great city."

Reporter Emily Sullivan of member station WYPR in Baltimore contributed to this report.