Accessibility links
'The Resisters' Review: Gish Jen's Dystopian Novel Hits Close To The Bone Gish Jen weaves baseball into her inspired vision of how Americans bought into the fantasy of less stress and more free time. As speculative fiction goes, The Resisters hits close to the bone. 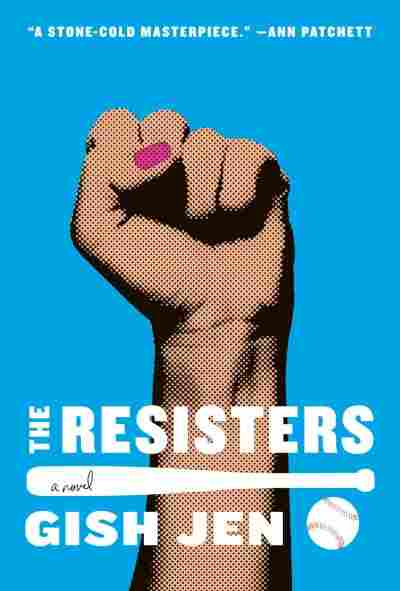 Gish Jen has always had something of a "Frank Capra-esque" view of America. Like Capra, who directed immortal Hollywood films like Mr. Smith Goes to Washington and It's a Wonderful Life, Jen's big theme in her work is the promise of America — imperfect, erratic, but still worth cherishing. Her characters — most of them immigrants or first-generation Americans — are a variant of the "little guys" Capra also loved. They always find themselves up against a rigged system favoring the rich, powerful and white so-called "typical Americans" of her first novel's title.

Jen's new novel, The Resisters, at first, seems like a departure: It's dystopian fiction about an America of the near future, filled with eavesdropping houses, surveillance drones, and an all-powerful Internet entity called "Aunt Nettie" — a sly mash-up of 1984's "Big Brother" and those sinister aunts who enforced order in The Handmaid's Tale.

But Jen has too much humor and heart as a writer to do a full-out futuristic nightmare. Instead, the feel of The Resisters is more like that noir sequence embedded within It's a Wonderful Life: you know, where Clarence the Angel shows George Bailey what a honky-tonk town Bedford Falls would've become had he never been born.

Life in the America of The Resisters is tense, but the wry tone of Jen's characters assures readers that this state of affairs won't be permanent. And how's this for a clever Capra-esque touch: In Jen's dystopian regime of the future, the event that sets a full-blown resistance movement in motion is the all-American pastime: a baseball game.

The Resisters, like a lot of dystopian fiction, is primarily plot-driven and its appeal rests on its ingenuity, which is unflagging. In brief, Jen's story focuses on a family of three: The dad, named Grant, narrates most of the novel. He's of Afro-Caribbean descent and was once a teacher; but, in what's now called "AutoAmerica" (because everything is automated), most jobs have been wiped out. The involuntarily unemployed, or "Surplus" as they're called, subsist on a guaranteed minimum income. Strangely, this population includes everyone who's, for instance, categorized as "coppertoned," (as Grant is) or "odd-bodied" or "odd-godded" — (in other words, not Christian). The so-called "Netted" elite, all of whom are "angelfair," can work and get college degrees.

Grant's fierce wife, Eleanor, who's part Asian and part white, is leading a legal fight to sue Aunt Nettie for toxic chemicals that have been discovered in the food and land allotted to the Surplus. The couple's mixed-race teenage daughter, Gwen, possesses a natural-born talent as a pitcher, honed while playing on an underground Surplus baseball league.

But no Field of Dreams can stay hidden from the eyes of Aunt Nettie. Gwen is recruited to play ball at Net University and, then, to play on the Olympic baseball team for AutoAmerica. Given that Aunt Nettie is holding her troublemaking mother hostage, it's an offer Gwen can't refuse.

I confess: I like the romantic idea of baseball much more than the reality of reading about or watching the game, so I appreciated that Jen kept her "inside baseball" descriptions short and sporadic. The power of The Resisters derives, instead, from Jen's inventive elaboration on how the change happened; how Americans gratefully handed over their autonomy to a big combo of machines, AI and the omnipotent Internet. As Grant explains, it started small, with Nettie keeping his calendar, among other tasks:

I had also allowed Aunt Nettie to email people on my behalf, checking the "mimic your voice" option ... What's more, I had taken advantage of the EZ tools offered to me and trained Aunt Nettie to write my lessons and my syllabi — even to generate samples sentences and punny jokes. ...

As for why I did these things — I generally did them, I see now, because I appreciated some associated convenience, which was ... because I could be, as my mother liked to say, lazy as a rock at the bottom of a hill.

As speculative fiction goes, this inspired vision of how Americans bought into the sedating fantasy of less stress, less thinking and boundless leisure time hits close to the bone. But, with her characteristic generosity and restrained optimism, Jen doesn't scold or despair. In The Resisters, she offers hope that, after a long, misbegotten seventh-inning stretch, Americans of the near future will be eager to once again play ball and take up the hard work of participatory democracy.

Read an excerpt of The Resisters