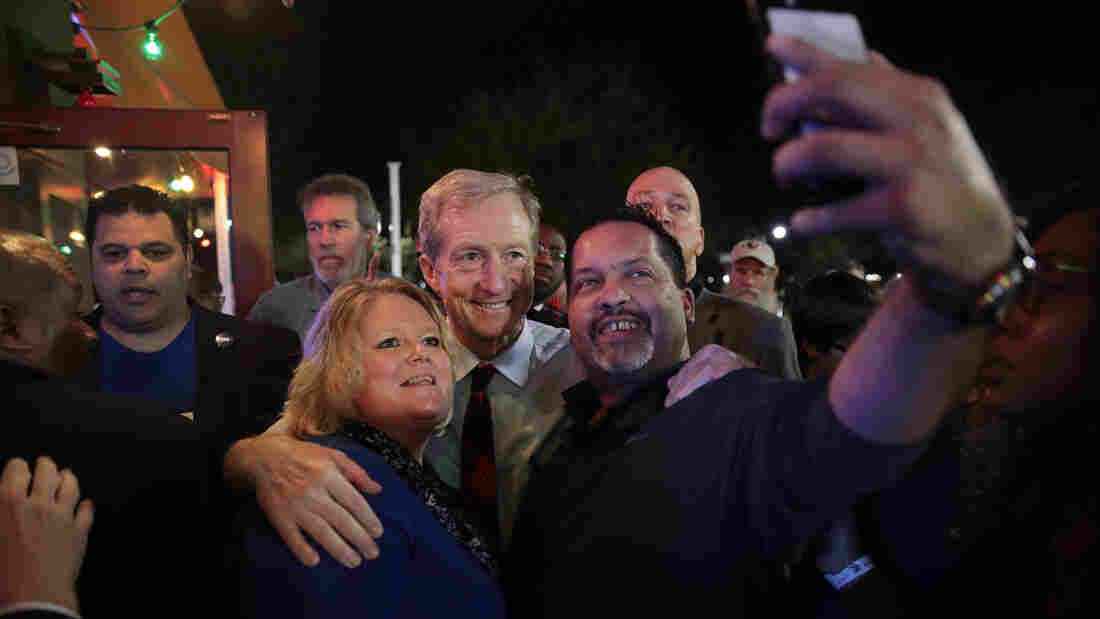 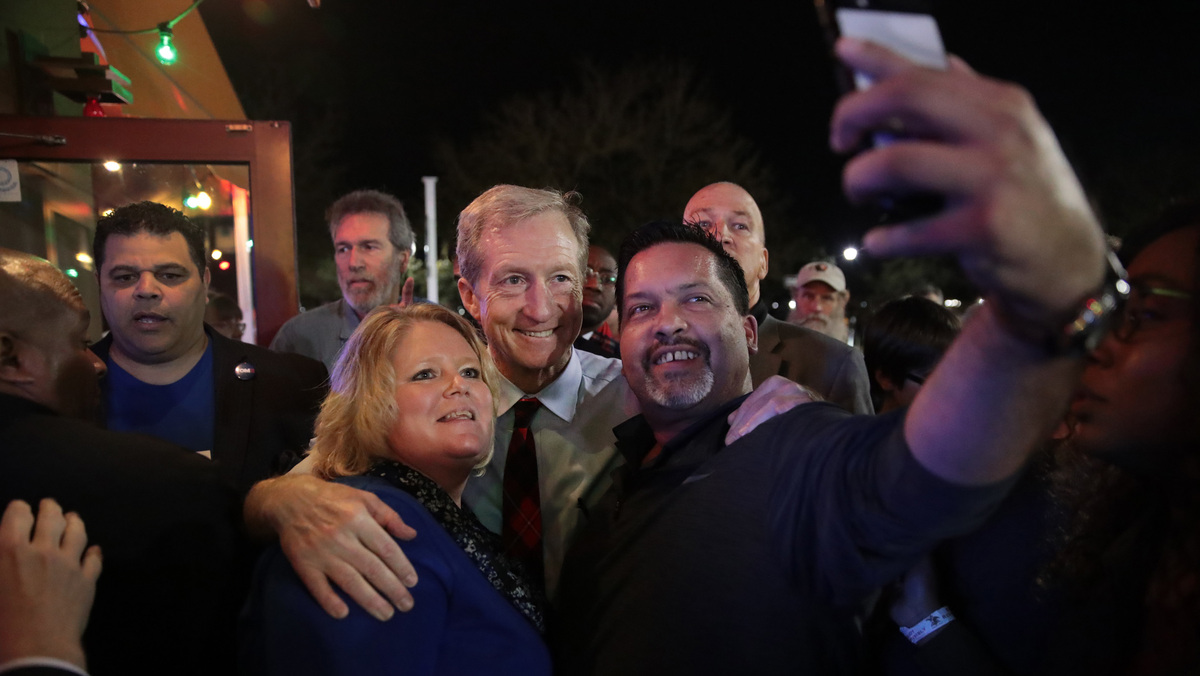 As Tuesday's Democratic presidential primary debate came to a close, each of the candidates was asked to name the biggest misconception voters have about them.

A day later, the question was still on the mind of Tom Steyer, the billionaire hedge fund investor who has barnstormed South Carolina, aggressively courting the black vote with a focus on racial justice and climate issues.

"I know that people describe me as being a rich person," Steyer told the group gathered in the fellowship hall of Georgetown, S.C.'s Bethel AME. "We're in church. I'm not defined by money. That is not how I think about myself. I'm from a family that has never thought that way about life."

Whether Steyer sees himself that way or not, his spending has prompted a stir in South Carolina as he seeks a foothold here. He has poured money into the black community, in the form of supporting black businesses, vendors and the ads that have inundated this state.

Joe Biden's Campaign Is On The Line In South Carolina

That focus was on display in Georgetown. As people trickled in out of the rain, some picked up shirts that Steyer's campaign is giving out. One said "Reparations are Past Due," another "Invest in HBCUs." A volunteer handed out church fans with photos of Steyer surrounded by black South Carolinians.

At one point, there was a throwback to the refrain of the Obama years, but instead of "fired up" and "ready to go," people chanted "Steyered up," and "Trump's gotta go."

Jack Scoville, a retired lawyer and the former mayor of Georgetown, was in the front row. He was leaning toward supporting Biden, who was campaigning in Georgetown, about a mile away.

"Well frankly, I hadn't been very impressed with Mr. Steyer. I don't like the fact that these guys come in because they've got a lot of money and think they can run the country," Scoville said. 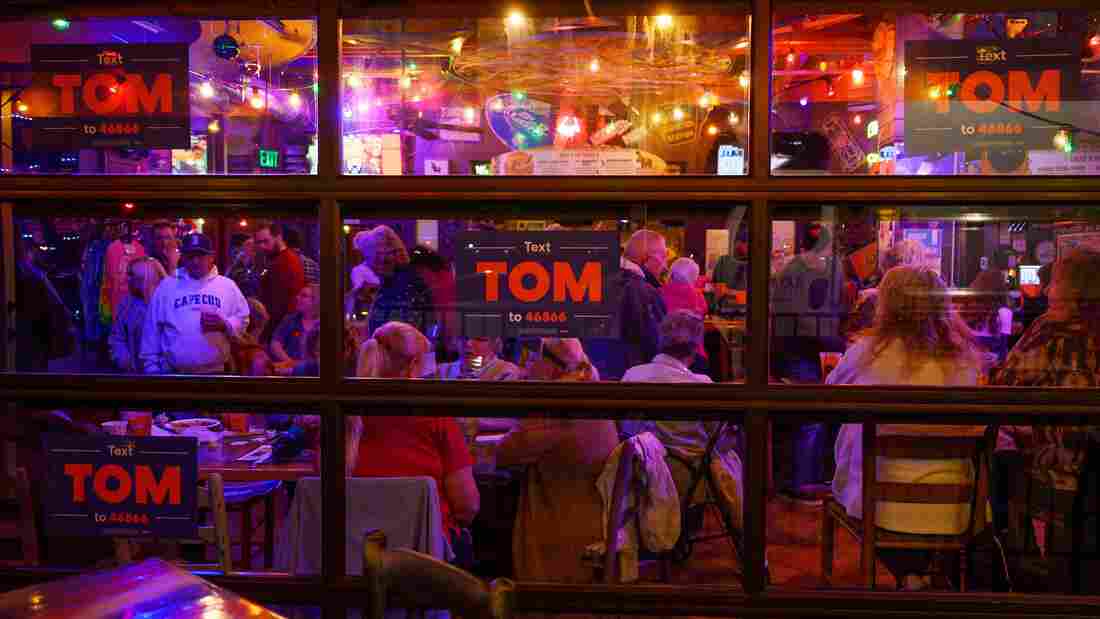 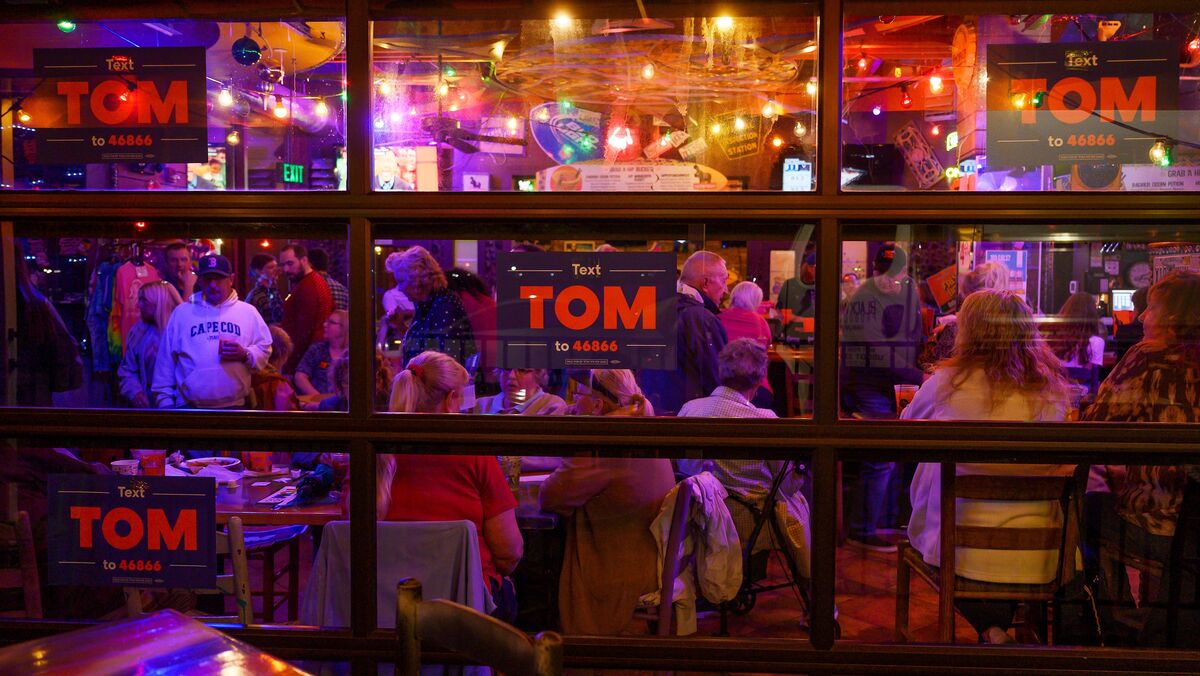 Scoville prefers someone with a more traditional background, but he said he was willing to be convinced. Sitting next to him was Mack Nesmith of Georgetown, who is also retired and also undecided.

"I'm in a dilemma right now between Steyer, Vice President Biden and Elizabeth Warren, it's between those three," Nesmith said.

Nesmith said he wanted to learn about Steyer's positions on Medicare, Social Security and what his plans are for America's senior citizens.

One thing that everyone here mentioned was the ads that Steyer has been running in the state. They're impossible to miss. Since July when Steyer jumped into the race — after initially demurring — he has spent more than $17 million on local television ads.

And then there are the mailers.

Nesmith said he got more from Steyer than anyone else. Sitting on the other side of the room, Marvin Neal, who is the head of Georgetown's NAACP, said he got three or four each week.

They're so ubiquitous that a voter at Steyer's CNN town hall this week asked Steyer, the founder of NextGen America and a longtime climate change champion, how the strategy was environmentally responsible.

Steyer has staked his campaign on South Carolina, and there are signs that his strategy — which leans heavily on courting the black vote — has helped his candidacy. A Monmouth University poll on Thursday showed that he has support of 15% of Democratic primary voters, in third place behind Biden with 36% and Bernie Sanders with 16%. No other candidate is in the double digits, or nearing the 15% threshold to earn statewide delegates.

Steyer did not net a single delegate in Iowa, New Hampshire or Nevada, so while South Carolina is regarded as a firewall for Biden, it could be a last stand for Steyer too.

Like Biden, his campaign's theory of the case is that victory in South Carolina would act as a launchpad ahead of Super Tuesday on March 3, when 14 other states vote. But polls in many of those states, where they do exist, show little good news for Steyer.

But here in South Carolina, it's not hard to find voters who have met him three or four times. At a breakfast town hall focused on rural health care in Orangeburg, Rosella and Michael Cooper said that Steyer had been to Denmark, where they live, over and over again.

Residents have raised questions about the water system there, and Steyer often talks about his trips when he's campaigning, here or elsewhere.

"Come to Denmark, which is such a small, small town, and it's a poor town, and then they have our interest," said Michael Cooper. "But when you come back as many times as he has, now you have our support."

As people wound through the line for a breakfast buffet provided by Steyer's campaign, Rosella Cooper told me she'd been volunteering for Steyer all week.

While some have criticized Steyer, and fellow billionaire Michael Bloomberg, for self-funding their own campaigns, it didn't bother the Coopers. They saw the fact that Steyer was not seeking donations as a good thing.

"I was originally planning on supporting Joe Biden because he was familiar," said Palmer. "I figured if Barack Obama could trust him, I could trust him as well."

But she saw Steyer's ads, and learned more about him, and ultimately decided to give him her support.

I think Steyer is a billionaire with a heart and a message that is resonating with people.

Steyer's also picked up the support of some influential South Carolina lawmakers, including Gilda Cobb-Hunter, the longest-serving member of the South Carolina House, and an influential African American leader in the state. She is a paid national adviser to Steyer's campaign, a move that drew some scrutiny when first reported by The Associated Press.

Cobb-Hunter pushed back against some of the skepticism around Steyer's spending and concern that he is buying the state's black vote.

"It's not just about money. It's about message. You can have all the money in the world, but if you ain't saying nothing, then what does it really matter," she said at an interview at her Columbia office. "I think Steyer is a billionaire with a heart and a message that is resonating with people."

She also suggested that Biden's grip on the state's black vote was not as strong as polls make it seem. 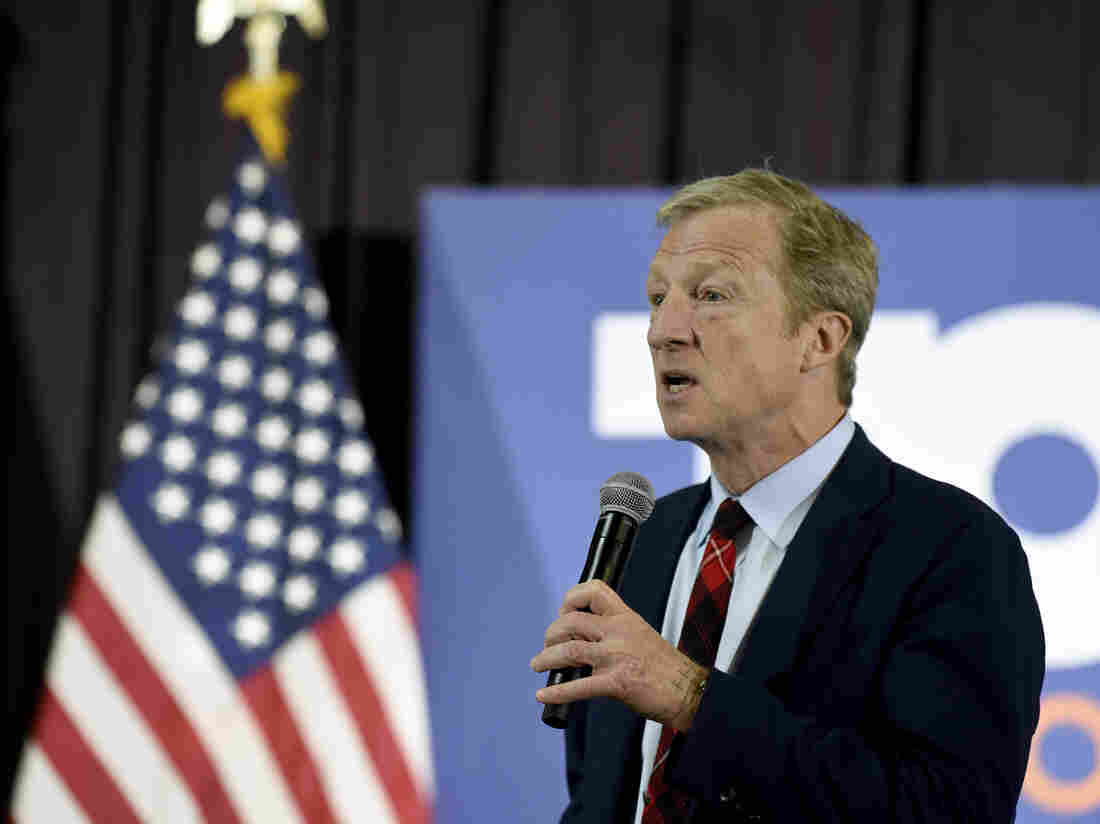 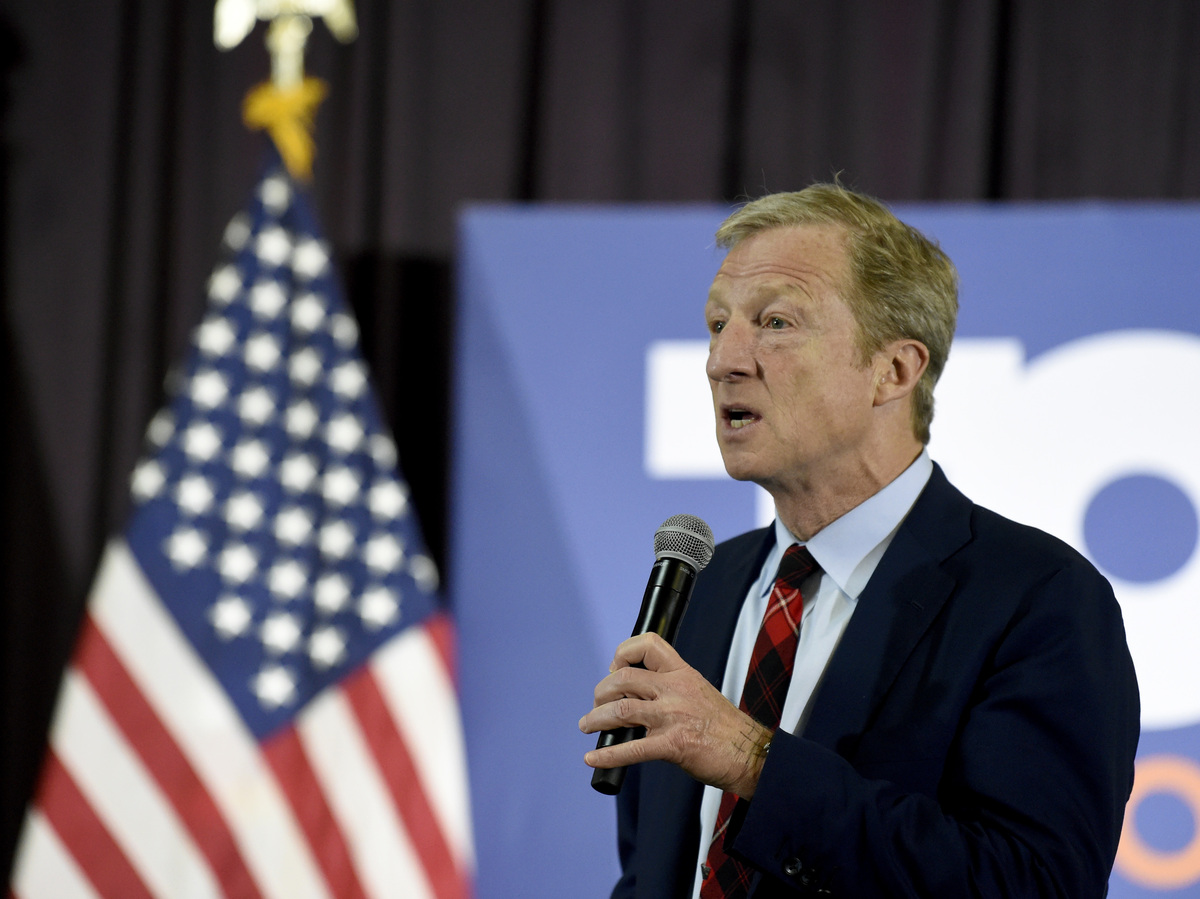 Steyer speaks at a town hall campaign event on Wednesday in Georgetown, S.C.

"Joe Biden's support was a mile wide and an inch deep, and that's not to be offensive, it's just being real," she said.

She said Biden's success should be judged not by whether he wins her state, but by what margin.

Though Biden leads in the polls here, Steyer rarely mentions him on the trail. Instead, he describes a race for first place between Sanders and Bloomberg, neither of which he says are really Democrats.

"Actually nominating one of the people from the extremes of the party risks the party turnout," Steyer said this week. "And that's what I've been trying to say about Bernie and Mike Bloomberg."

He says he's a progressive Democrat, the kind with the solutions that voters are looking for. They just have to give him a chance.

"That's why South Carolina matters so much. I have to show in real time with real people that they are voting for me and I can be the person to pull the party together," he said. "That's what has to happen, and that's what I'm asking you to help me do."