Accessibility links
Joe Biden's 2020 Campaign Is On The Line In South Carolina The former vice president got some promising results in polling leading into the primary this week. But even with a win, he still has lots of catching up to do to hope to win the nomination. 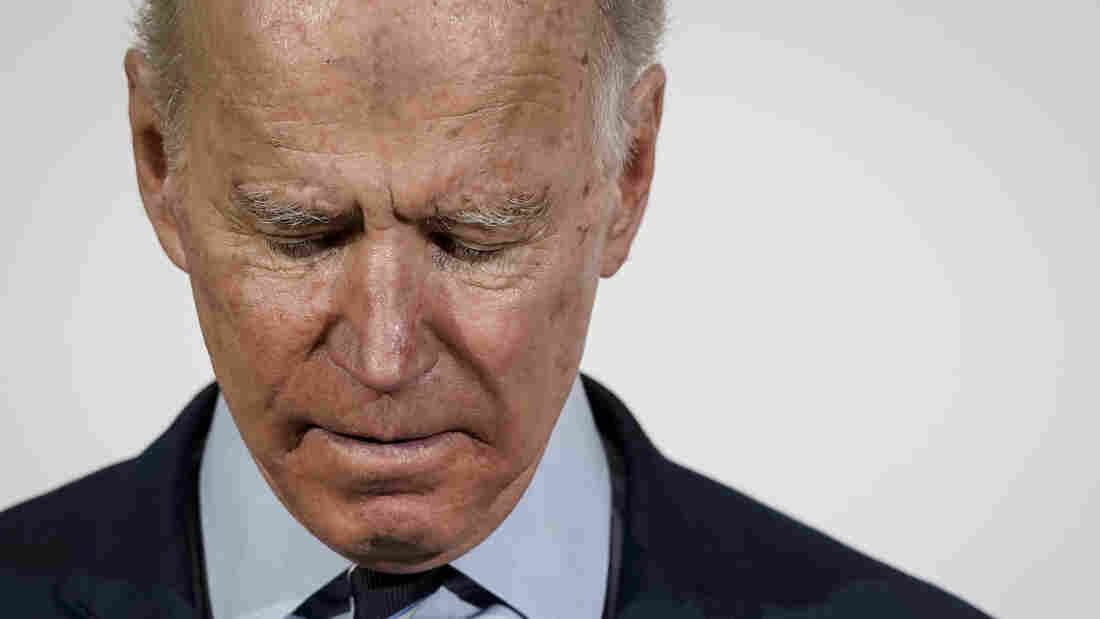 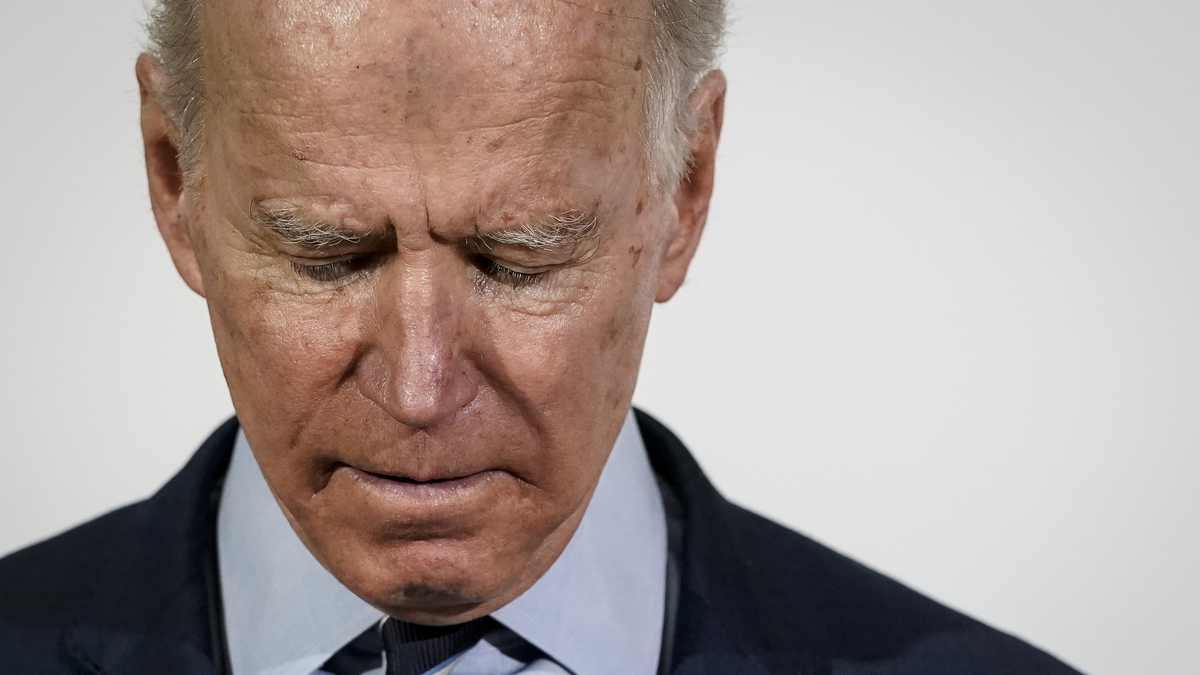 Asked during this week's debate in Charleston, S.C., if he would drop out if he doesn't win the primary there, former Vice President Joe Biden was blunt.

Asked again after the debate if he could carry on if he doesn't win South Carolina, Biden was equally declarative.

No one has more riding on South Carolina than Biden. Biden led for nearly a year in national polls for the Democratic presidential nomination and by big margins in South Carolina. After disappointing finishes in Iowa and New Hampshire, Biden collapsed nationally and margins tightened in South Carolina.

In the past week, Biden's lead has rebounded in South Carolina, as fears of a potential Bernie Sanders nomination are hitting fever pitch among establishment Democrats. In South Carolina, black voters are crucial, and Biden had one of his best debate performances of the cycle Tuesday night. Then, the next morning, he got the endorsement of popular longtime South Carolina Rep. Jim Clyburn.

It was probably the best 24 hours Biden has had since voting began in the nominating contest and was a much-needed shot in the arm for his candidacy. But the candidate who staked his claim in the race as the most electable hasn't won anything yet — making South Carolina must-win for Biden.

The stakes are especially high for Biden, as he jockeys to be the principal alternative to Sanders, because his campaign is running on fumes — trailing badly in ad spending and organization in those crucial Super Tuesday states that vote just three days after South Carolina.

Biden dismissed losses in Iowa and New Hampshire, the first two states in the Democratic nominating process, because they are overwhelmingly white states and don't represent the entire country.

Never mind that Biden held leads in both states in an average of the polls, just days and weeks before both contests.

Never mind that Biden has touted his ability not to win just black voters, but also white, working-class voters. 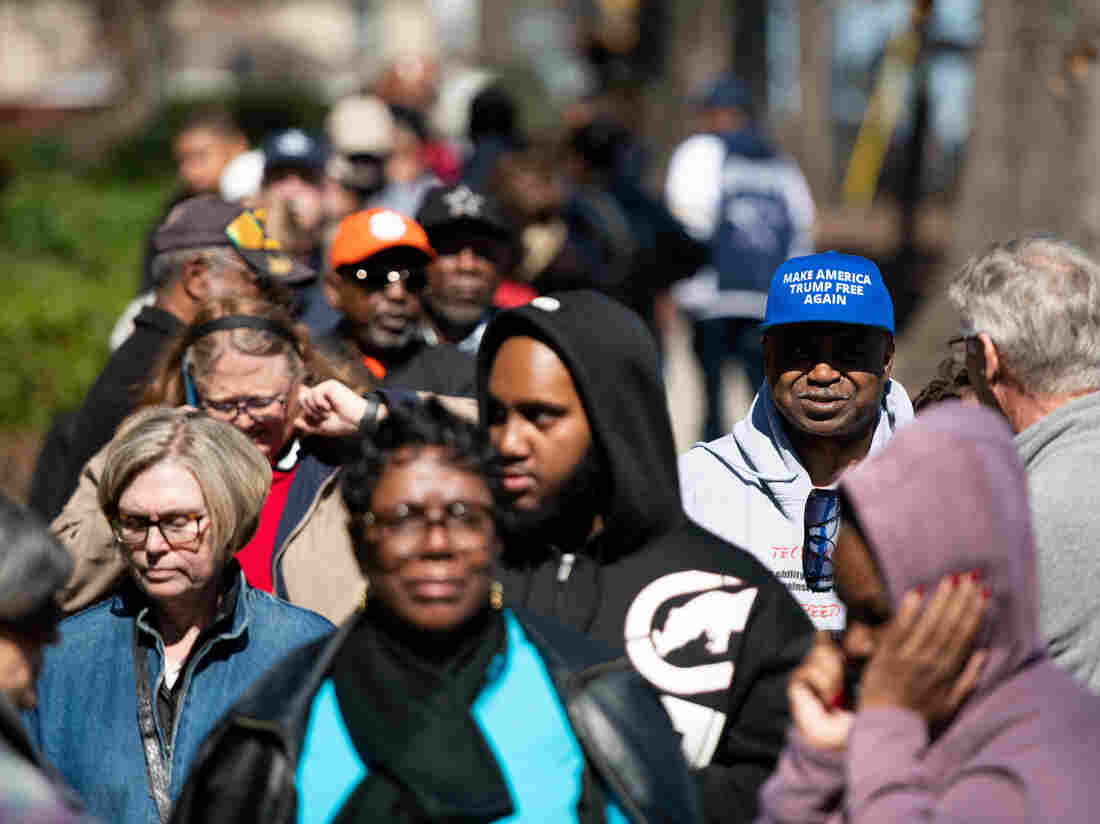 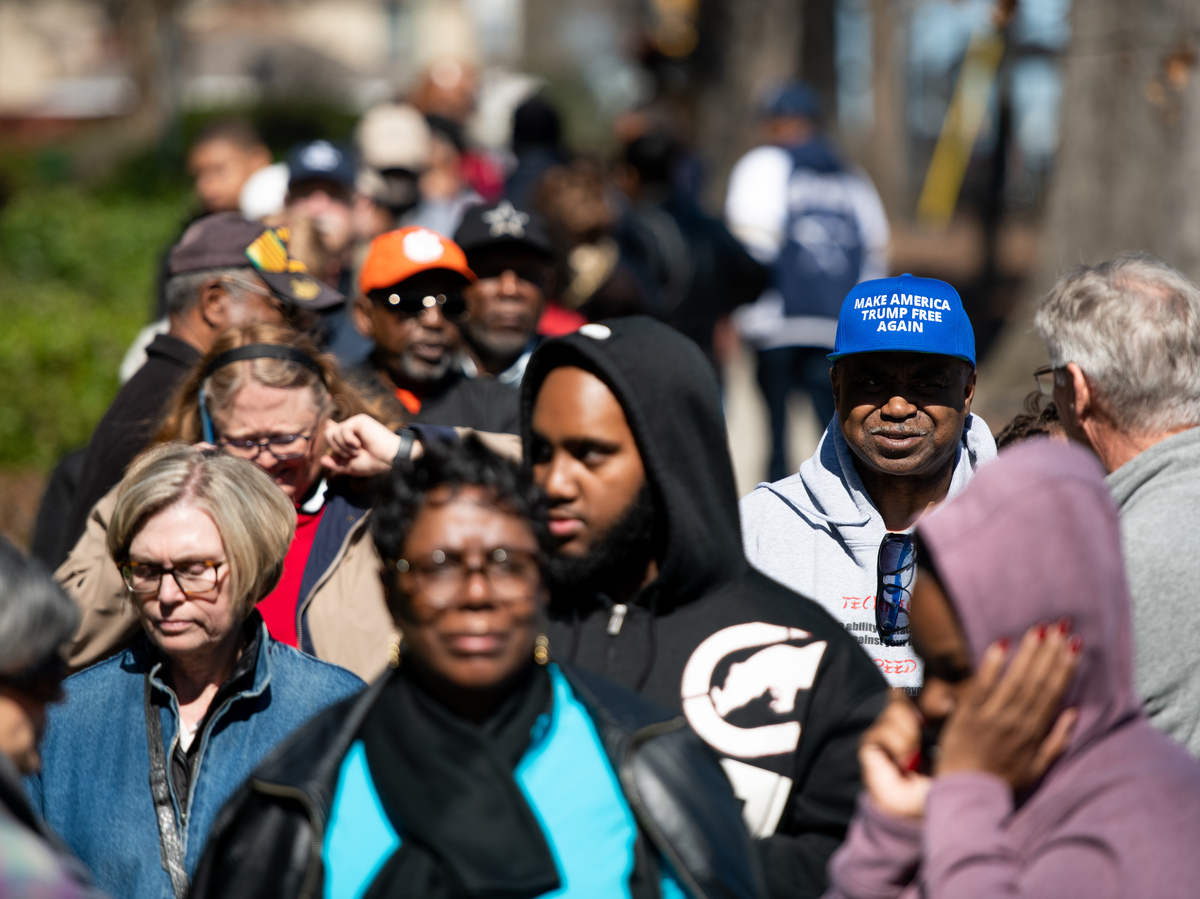 Al Hightower (in blue hat), a Joe Biden supporter, stands in line for early voting for the Democratic presidential primary at the Richland County Election Commission on Thursday in Columbia, S.C.

But Biden lost white voters without a college degree in all three of the first states, finishing behind Sanders and former South Bend, Ind., Mayor Pete Buttigieg in Iowa and Nevada. In New Hampshire, he finished behind Minnesota Sen. Amy Klobuchar, too, with the group.

Biden has won just an average of 13% of whites without a degree, including 13% of white men without a degree and 14% of women, according to entrance and exit polls. The number with women is especially surprising, considering that severely underperformed his standing in national polls before the contests began.

In the December NPR/PBS NewsHour/Marist poll, Biden's strongest support came from white women without a college degree — 34% said Biden was their choice versus 17% for Massachusetts Sen. Elizabeth Warren, 13% for Sanders and 10% for Buttigieg.

Here's how the candidates have done with groups since voting began:

Biden also said he would fare better when the electorate became more diverse, but in Nevada, the first state with significant black and Latino populations, Sanders won Latinos overwhelmingly. Sanders won half of Latinos (50%), and Biden finished a distant second with them, more than 30 points behind (17%).

If the Vermont senator runs up the score with Latinos again on Super Tuesday in California and Texas, there may be no catching him in the pledged-delegate race.

Biden did win black voters in Nevada, but only by a 38%-to-28% margin over Sanders. Wealthy businessman Tom Steyer finished third with a sizable 17%.

Incidentally, the spread in the average of the polls in South Carolina is not that far off from those entrance polls in Nevada. Biden holds a 34%-to-22% lead over Sanders with Steyer third with 14%.

Biden hopes a win in South Carolina will propel him to a good day on Super Tuesday, March 3. But that might be more difficult than it sounds.

Biden's campaign is not in a position to fully capitalize on any potential momentum out of South Carolina. His campaign has spent just over $600,000 on television and digital advertising in Super Tuesday states, according to data from Advertising Analytics provided to NPR.

His campaign has only been on TV in six of the 14 states that vote on Super Tuesday — Tennessee, North Carolina, Virginia, Texas, Alabama and Arkansas. Those happen to be the states with the highest percentages of black voters as shares of the Democratic electorates.

Black voters are undoubtedly important in a Democratic nominating contest, but with Sanders expanding his coalition, it's going to take more than African American voters to get Biden over the finish line to be the nominee.

In California, Super Tuesday's crown jewel of delegates, the Biden campaign has only spent roughly $4,000 on digital ads.

Bigger than Sanders, though, Biden is competing for moderate voters with former New York Mayor Michael Bloomberg, Buttigieg and Klobuchar. Putting aside Bloomberg, whose level of personal spending has never been seen before in a presidential election, both Klobuchar and Buttigieg are far outspending Biden on the airwaves and on digital.

Klobuchar and a super PAC supporting her have spent more than $4 million. Buttigieg has spent nearly $3 million.

In addition to ad spending, Biden is lagging in organization. According to NBC News, Biden has about 500 staffers on the ground in Super Tuesday states, compared with 1,300 for Warren, 1,000 for Sanders and at least 950 for Bloomberg.

All those obstacles make Biden an underdog for the nomination, which is why he needs South Carolina to have any hopes of staging a comeback. He likely needs to win by a wide margin to be able to juice all the free media he can get — plus some outside help — ahead of the biggest day of the campaign yet, Super Tuesday.