Accessibility links
Interview: Louise Erdrich, Author Of 'The Night Watchman' Erdrich's new novel, set in the 1950s, follows a Native American tribe fighting for their rights as the U.S. Congress prepares to terminate their nation-to-nation treaties and land ownership rights. 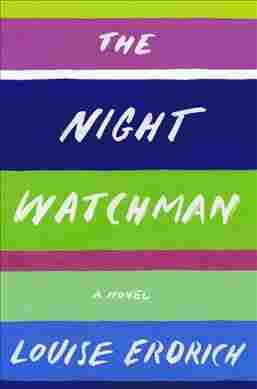 I asked Louise Erdrich to introduce the main character of her new novel, The Night Watchman. His name is Thomas Wazhashk.

Thomas was named for the muskrat, wazhashk, the lowly, hardworking, water loving rodent. Muskrats were everywhere on the slough-dotted reservation. Their small supple forms slipped busily through water at dusk, continually perfecting their burrows, and eating (how they loved to eat). Although the wazhashkag were numerous and ordinary, they were also crucial ... In the beginning, after the great flood, it was a muskrat who had helped remake the earth. In that way, as it turned out, Thomas was perfectly named.

Erdrich based the character on her grandfather, who, like Thomas, was a tribal leader of the Turtle Mountain Band of Chippewa, who, as the novel opens in the fall of 1953, are facing an existential threat: They're among the first five tribes slated to have their nation-to-nation treaties and land ownership rights abrogated by the U.S. Congress — a process called termination — and they have only months to mount a defense.

On reading her grandfather's letters

I reread his letters every so often to get a grip on why I'm doing this writing. I mean, he was a wonderful writer. His letters are beautiful, full of humor and storytelling. And he wrote them during this time when he was fighting termination and working as the night watchman. And what I think I absorbed was his sense of decency, and his commitment to his family and his people. It's hard to write about a decent person, you know. It is. It is hard. When I write characters. My instinct is really to give them a flaw, a conflict, something huge that they they're struggling against.

On Thomas's niece Patrice, who leaves the reservation to find her sister in Minneapolis

She's the kind of woman who did things perfectly when enraged. And she follows her sister because her sister has become part of this other program that it hinged into termination. And that was called relocation. And relocation was designed to remove native people from the reservations by giving them incentives to move to the city. So instead of putting that money into infrastructure on reservations, the government decided to move people off that valuable property.

On the effect of tribal termination in 1953

As it shook out, the Turtle Mountain Band of Chippewa was the one tribe to resist early and early on. Of those first five, what happened was complete devastation and loss. The forests were sold off. The tribes ended up with, again, you know, through the generations, a smaller and smaller land base, and now finally it was loss of identity. It was loss of life. There was despair among people who were terminated. They had done everything possible to fit in to American society and culture. But it wasn't enough.

This is something that I worried about. It wasn't why I wrote the book, but maybe it was why my grandfather's letters were so powerfully resonant for me, because I'd been thinking about this for years and years. And why I had to write it then was, it just took over. I had another book I was working on, and this suddenly became vital to me and his voice, Patrice's voice, everything in it. It flowed so rapidly and I had to write it.

This story was edited for radio by Peter Breslow and Hadeel Al-Shalchi, and adapted for the Web by Petra Mayer