Accessibility links
Review: 'Finna,' By Nino Cipri Nino Cipri's magical multiworld adventure is set in a Swedish big box furniture store — no, not that one — where the showroom floor is prone to interdimensional wormholes that swallow shoppers. 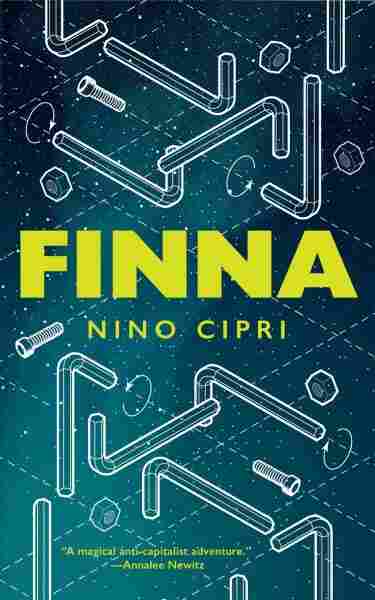 There isn't a word wasted in Nino Cipri's Finna. For a book about travelling through nightmarish labyrinths that cut and twist between worlds, it's remarkably straightforward.

Ava works at LitenVärld, an IKEA-like giant box store where "the showrooms sat together uneasily, like habitats at a hyper-condensed zoo." Her day begins with relatively minor inconveniences — being forced to come in on her day off, worrying about having to work with Jules, her ex as of a week ago — but these escalate significantly when a young woman reports that her elderly grandmother's gone missing. It turns out that something about the haphazardly organized chaos of LitenVärld makes it an especially likely place for wormholes to open up between dimensions — to the point where there are corporate instructions (on VHS) on what to do when that happens. But corporations being what they are, the in-house division for wormhole-patrol was cut a decade ago as a cost-saving measure, so it falls to the two most junior members of staff — barely able to speak to each other, the wound of their breakup still raw — to venture into the other worlds themselves and retrieve the lost grandmother.

I tore through this book in knuckle-biting delight. The contrast between the wacky extra-dimensional (and often terrifying) hijinks and LitenVärld's soul-depleting mundanity is fresh and lovely, and you're never quite able to forget the fact that person-eating chairs and blood-drinking Hive Mothers are more enjoyable to spend time with than the grinding misery of minimum-wage work in our late capitalist modernity. But the shenanigans are not the point; they function best as a sly, winking backdrop to the deeply moving character work.

Me, Myself, and IKEA: What Our Love For Swedish Furniture Says About Narcissism

In the midst of the magical multiworld adventure, the painful, beating heart of the story is these two deeply hurting people trying to behave well towards each other.

Jules is black and non-binary; Ava suffers from anxiety and depression; both are queer. Their traumas and marginalizations are part of what brought them together, but also what collapsed their relationship. In the midst of the magical multiworld adventure, the painful, beating heart of the story is these two deeply hurting people trying to behave well towards each other, struggling to build friendship out of codependency in a world (or worlds) especially hostile to them. I appreciated so much that this isn't the story of a couple trying to get back together, but working hard to find fellowship with each other for its own sake.

The experience of reading Finna is smooth and seamless; I found myself thinking that it would make a great screenplay, then was smugly pleased to learn from the acknowledgements that it started out as one. There's a cinematic clarity to its movements, a deft pace to the action, and moments of needle-sharp insight that left me breathless — as when Ava, thinking about her mental health, remembers the dread and despair at "the light right after the sun went down, when she realized she'd accomplished almost nothing that day." Within the wild imaginary of other universes, these stabs of immense familiarity and recognition are vividly effective.

But it's funny, too! There's a resilient thread of humor running throughout it, that makes me just want to press the book into people's hands while gazing sternly into their eyes and saying "Pasta and Friends" very slowly. Come for the deliciously bizarre premise, stay for the anti-capitalism and compellingly, messily real queer relationship. Don't lose sight of the exit. Be suspicious of fuzzy chairs.

Amal El-Mohtar is the Hugo-award winning author of The Honey Month, co-author with Max Gladstone of This Is How You Lose the Time War, and writes the Otherworldly column for the New York Times Book Review.