Accessibility links
South Carolina Hands Democrats A Challenge: Running In A Strong Job Market South Carolina and other early states have some of the lowest unemployment rates in the country. That means presidential candidates are making some nuanced economic messages 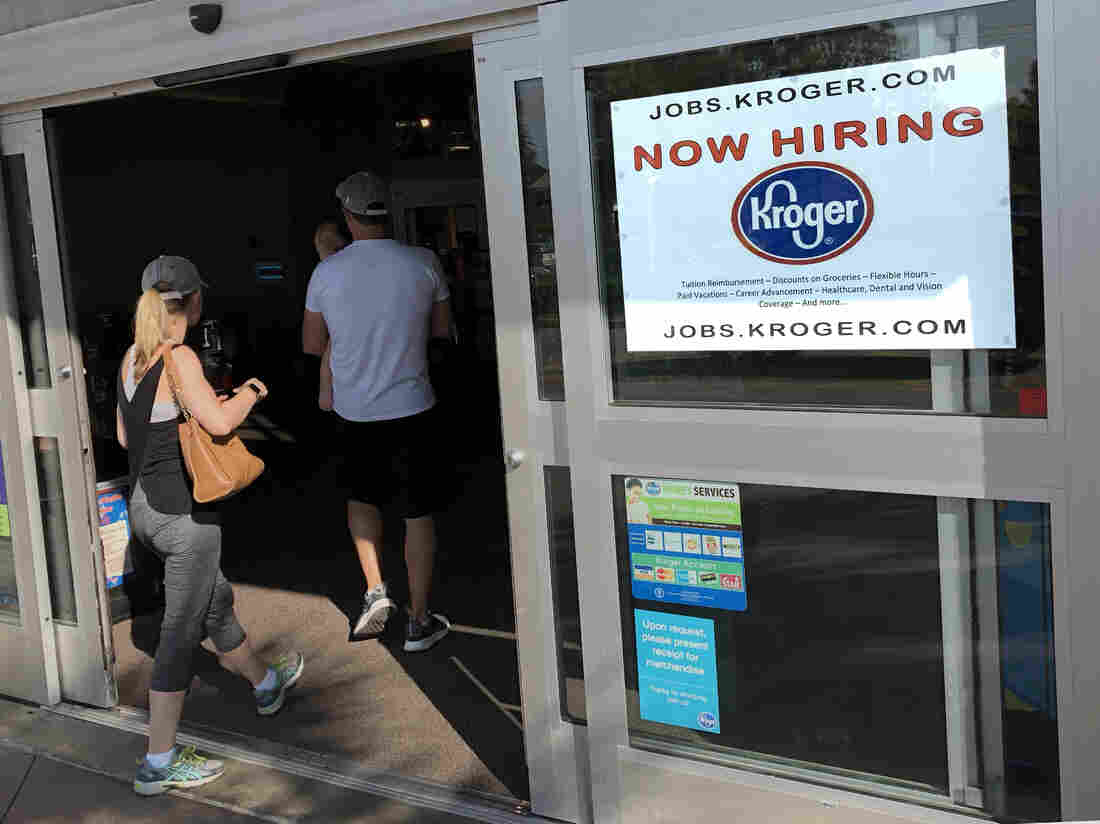 A hiring sign hangs in front of a Kroger's grocery store in Hilton Head, S.C. South Carolina has one of the lowest unemployment rates in the nation. Ted Shaffrey/AP hide caption 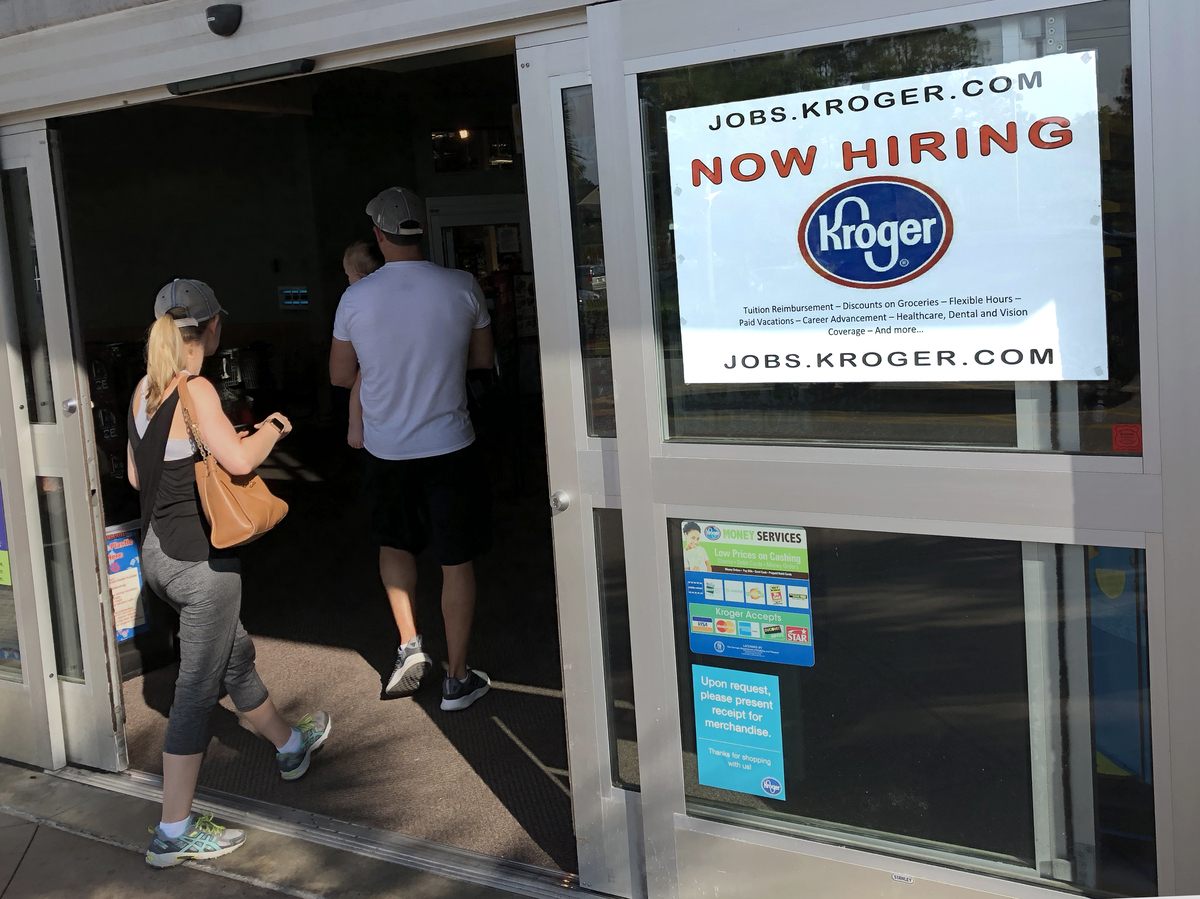 A hiring sign hangs in front of a Kroger's grocery store in Hilton Head, S.C. South Carolina has one of the lowest unemployment rates in the nation.

The most recent Democratic debate started out with a question for Sen. Bernie Sanders, but it was a question any Democratic nominee would have to think about.

"We haven't had a national unemployment rate this low for this long in 50 years. Here in South Carolina, the unemployment rate is even lower," said CBS moderator Norah O'Donnell. "How will you convince voters that a Democratic socialist can do better than President Trump with the economy?"

Not all of the candidates call themselves Democratic socialists, of course. But Donald Trump is running for reelection amid a strong economy — unemployment is low, and consumer confidence has been high.

And the conventional wisdom is that a strong economy helps buoy incumbent presidents to reelection — for decades, election prediction models have factored in economic indicators like unemployment and GDP growth. (Trump knows this, and he often trumpets it at his rallies and on Twitter.)

And the recently-strong economy is a particularly appropriate topic in South Carolina, which is tied with two other states for the lowest unemployment rate in the nation, at 2.3%. And two of the other three early states, New Hampshire and Iowa, are also among the 10 states with the lowest unemployment. That has made these early states a test for Democrats of their economic messages amid a good job market in particular.

Making the case for big changes

Sanders responded to that first debate question with the economic pitch that has been his standby for years now: that the American economy has fundamental problems, chief among them inequality.

"You're right. The economy is doing really great for people like Mr. Bloomberg and other billionaires," he said. "But you know what, for the ordinary American, things are not so good."

Economist Jared Bernstein says that there is something to the idea that there are still underlying economic problems. He served as chief economist to former Vice President Joe Biden but has not publicly endorsed a candidate.

"There are far more families than you would think, given an unemployment rate that's at a 50-year low that have tremendous difficulties making ends meet on what they earn," he said. "These arguments about the gap between earnings and needs, I think provide a real opening for Democrats.

And there is some evidence for this: workers are not sharing in growth nearly as much as they used to — more of that new income has gone to shareholders, for example.

Candidates also often bring up the tens of millions of uninsured Americans on the campaign trail, or the fact that some Americans need to work multiple jobs to make ends meet, or a desire to raise workers' wages. Indeed, in South Carolina, an abundance of jobs exists alongside one of the lowest state median incomes in the nation.

One question then for voters is how squeezed they feel. Attending an Orangeburg County Democrats meeting, Kenneth McCaster said he isn't worried about his own economic well being.

"Some of us, you know, like I would say for me, you know, I work three or four jobs," he said. "So, you know, the economy is fine for me. But there's some other people that are actually suffering because of the economy."

Talking about changing the economy structurally, as more-progressive candidates in particular often highlight, can also mean talking about persistent racial inequities. Businessman Tom Steyer highlighted this at this week's debate.

It's not just policy that wins voters over, though; it's also old-fashioned retail politicking and showing voters you feel their pain.

That is why lawyer Shireen Carter said she likes Elizabeth Warren. She went to a Warren event just ahead of the Iowa caucuses, clutching a printout of her student loan information.

"I printed it out just to show her today," she said. "And I think that it matters to her. I think that she'll feel that for me — that it's a burden."

It's possible that, for some voters, a strong economy provides an opening to tackle large-scale, underlying economic problems that progressives like Warren and Sanders talk about.

"You can kind of see the structure and see the opportunity instead of drowning in your situation," said Jessica Bright, South Carolina state director for Sanders. "So definitely the time is right to change structurally, change the systems that we're going up against."

For more moderate candidates, talking about big topics like inequality can also open the door to conversations that might appeal more to centrists. At a town hall ahead of the Iowa caucuses, Joe Biden used the Trump tax cuts to talk about fiscal responsibility.

"How many of you really got boosted by that great tax cut? Well, good for you," he said. "But by and large, most people didn't do all that well by the tax cut. But it did increase this gigantic deficit."

The reality: the economy has been pretty strong

All of this said, it remains true that some Democratic voters simply know that the economy has been running along at a steady clip.

That doesn't mean they give Trump credit, though. Joyce Delk, who went doorknocking in South Carolina for Biden last week, gives him some credit for today's economy.

"I don't care what Trump says now that the economy is doing well, but the economy is still rolling off President Obama and Joe Biden — what they did when they were in office," she said.

Given that, some Democrats are hesitant to nominate a self-proclaimed socialist who wants to overhaul entire segments of the economy. And they worry that that kind of a message would at best fall flat with general-election voters.

It's also possible that the U.S. is now in a sort of post-economic election era. That's what political analyst Charlie Cook said at a Washington economic conference this week.

"Right now the economy is not driving American politics," he said. "You don't have unemployment at a 50-year low while at the same time you've got a president who has never ever had a 50% job approval rating in any credible national poll."

Whatever is motivating voters, though, the economy for now underpins President Trump's reelection message. If the coronavirus (and fears about it) further rattle the U.S. economy, however, it could mean an entirely new backdrop for November's election.