Democratic Candidates Step Up Criticism Of Trump's Handling Of Coronavirus

Democratic Candidates Step Up Criticism Of Trump's Handling Of Coronavirus 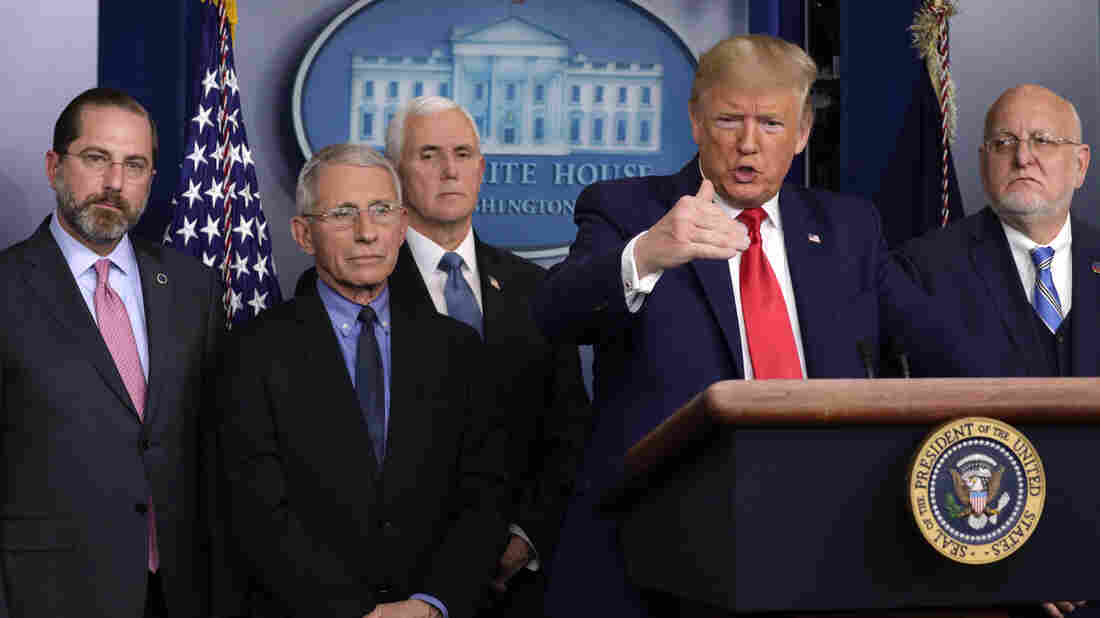 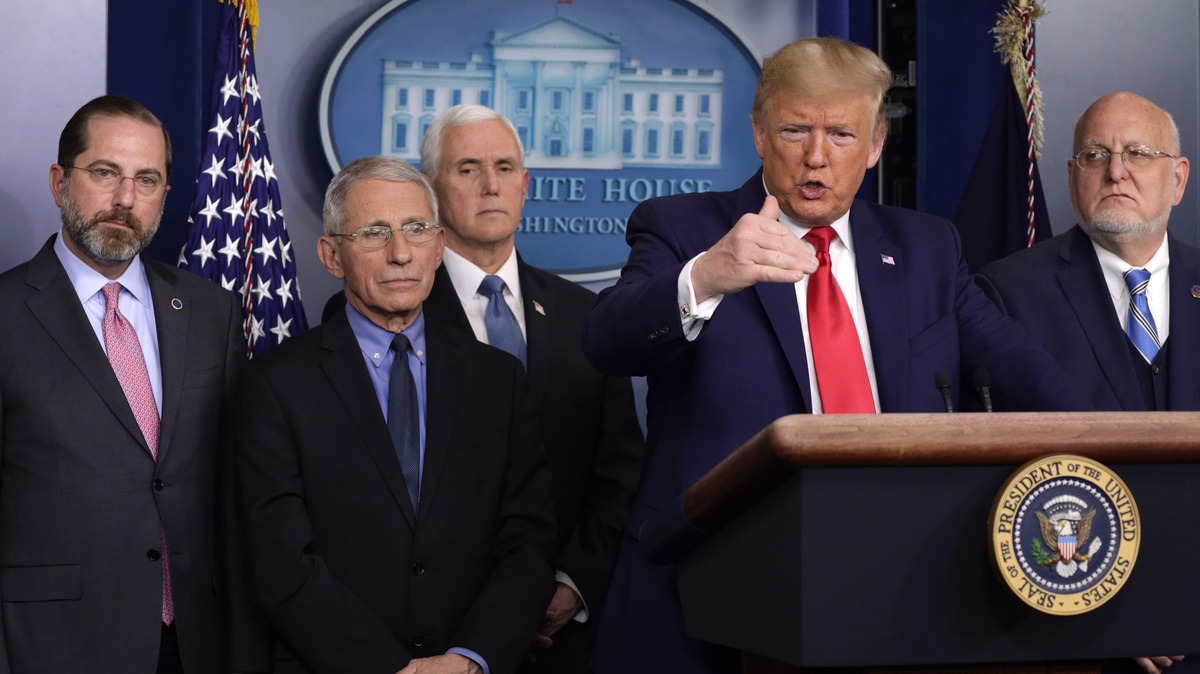 Democratic presidential hopefuls have stepped up their criticism of President Trump's handling of the coronavirus, accusing his administration of "incompetence."

The president has noticed. Speaking to supporters Friday night in South Carolina, he accused his Democratic rivals of using the virus for political ends.

"The Democrats are politicizing the coronavirus," Trump said. "One of my people came up to me and said, 'Mr. President, they tried to beat you on Russia, Russia, Russia.' That did not work out too well. They could not do it. They tried the impeachment hoax. ... They tried anything. ... And this is their new hoax."

During the rally, Trump said "the best professionals in the world" were working on the nation's response to the virus.

5 Ways To Prevent And Prepare For The Coronavirus

Trump then held a news conference Saturday, after the first U.S. coronavirus death was confirmed in Washington state. Trump said a woman in her late 50s has died from a coronavirus infection. (Washington state public health officials later said the person who died was a man.) At the news conference, the Trump administration announced new travel restrictions and advisories for Iran, Italy and South Korea; and that the U.S. government has contracted with the company 3M to produce 35 million more face masks per month.

Responding to a reporter's question about his use of the word "hoax" the night before, Trump said: " 'hoax' referring to the action that [Democrats] take to try and pin this on somebody because we've done such a good job. The hoax is on them."

What the Democrats have said

The South Carolina primary is Saturday. At a campaign event Saturday morning in Greensville, S.C., former Vice President Joe Biden said it was "bizarre" and "dangerous" for Trump to have used the word "hoax" at all.

In an interview Friday with CNN, Biden said the Trump administration should defer to the experts. "Let the experts take this over," Biden said. "Everyone will have more confidence." One reason stock prices are falling, Biden said, "is not just the pandemic concern, but the way in which the president is handling this."

At every stop in South Carolina on Friday, Vermont Sen Bernie Sanders blasted Trump for focusing on politics instead of the growing coronavirus threat.

"Everybody knows there is a coronavirus spreading all over the world," Sanders said at his first stop of the day, at a church in St. George.

"You would think that you'd have a president of the United States leading, working with scientists all over the world, bringing people together to figure out how we're gonna deal with this crisis. He is here in South Carolina," said Sanders, ahead of the Trump campaign rally later that night in Charleston. "He doesn't even have any opposition in the Republican primary. Why is he here? He's here to try and disrupt the Democratic primary."

The Sanders campaign has also released statements criticizing the Trump administration's response to the growing public health and economic threat as "inadequate, misleading, and dangerous."

The concerns appeared to be shared by some voters. A handful of Sanders supporters at rallies Friday were spotted wearing protective face masks.

At campaign stops across Tennessee on Friday, billionaire and former New York City Mayor Mike Bloomberg repeatedly attacked Trump's management and blamed the president for the upheaval in the stock market.

"The coronavirus has already arrived here in America, and make no mistake: The incompetence in the White House is endangering lives and hurting our economy," Bloomberg said, accusing Trump of "burying his head in the sand" when he was first briefed on the issue two months ago.

For Bloomberg, who took office three months after the Sept. 11 terrorist attacks, it's also a way to remind primary voters concerned about a possible pandemic, or economic unrest, that he was a competent manager in times of crisis.

"In times like this we need strong, proven leadership in the White House," he said. Bloomberg plans to air a three-minute-long video on CBS and NBC during commercial airtime Sunday night to discuss the virus, and the importance of having a president who can respond appropriately to such crises.

"This can't be about politics. We've got to have leadership that puts the input of public health experts first," former South Bend, Ind., Mayor Pete Buttigieg told CNN Friday."I don't know where the president got the idea that this is something that could just take care of itself when it got warmer. This is going to take sustained coordination, both within and across the federal government and the interagency; between the federal government and the private sector as there is a race to find new therapies and perhaps a vaccine; and internationally, among all of the different authorities and countries, that must be tightly coordinating the response to this issue."

Billionaire hedge fund investor and climate activist Tom Steyer has been making increasingly dire warnings about the threat posed by the coronavirus, during his final sprint across the state of South Carolina ahead of the primary.

Steyer has repeatedly said that Trump's response is an indicator of his "incompetence in a neon sign" and said that Trump is "months late to do anything." He also faulted Trump for "clearing out the Centers for Disease Control [and Protection]."

But at a packed event in Myrtle Beach, S.C., his warning was more dire.

"He's just discovering two months later, 'Whoa, this could hurt my reelection attempts,' " Steyer said. "That's how superficial a man he really is. He is incompetent. This is his Katrina event, where it's like 'Whoa, I have to do a job?' Who knew?"

Minnesota Sen. Amy Klobuchar has also faulted Trump for proposing to cut funding for the CDC.

Sen. Elizabeth Warren, D-Mass., on Thursday introduced legislation that would redirect $10 billion of border wall funding to fight the coronavirus.

"Rather than use taxpayer dollars to pay for a monument to hate and division, my bill will help ensure that the federal government has the resources it needs to adequately respond to this emergency," Warren said in a statement.

Warren accused Trump of failing to direct "significant financial resources" to the coronavirus response. The administration has asked Congress for $2.5 billion to combat the virus; many lawmakers feel that's not enough, and have proposed doubling or even tripling that amount.

The White House acting chief of staff, Mick Mulvaney, accused the press on Friday of playing up the coronavirus story because "they think this is going to be the thing that brings down the president."