Accessibility links
Why Super Tuesday Results May Be Slow From California, West States including California increasingly rely on mail-in ballots that often take longer to count. In Texas, voters will be using brand-new equipment. So a delay does not necessarily mean trouble. 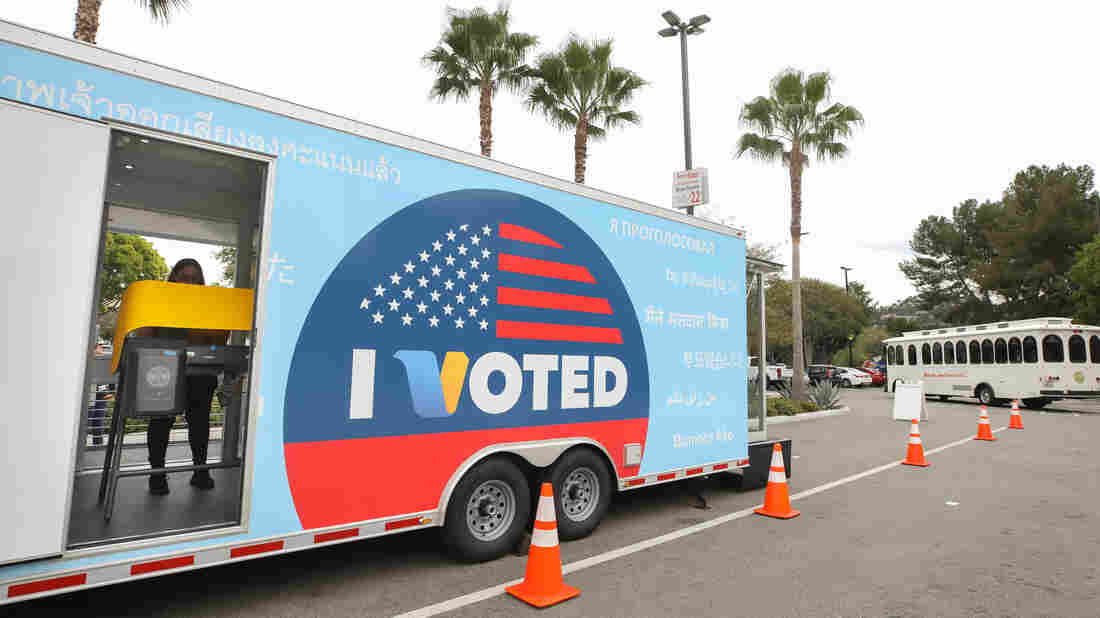 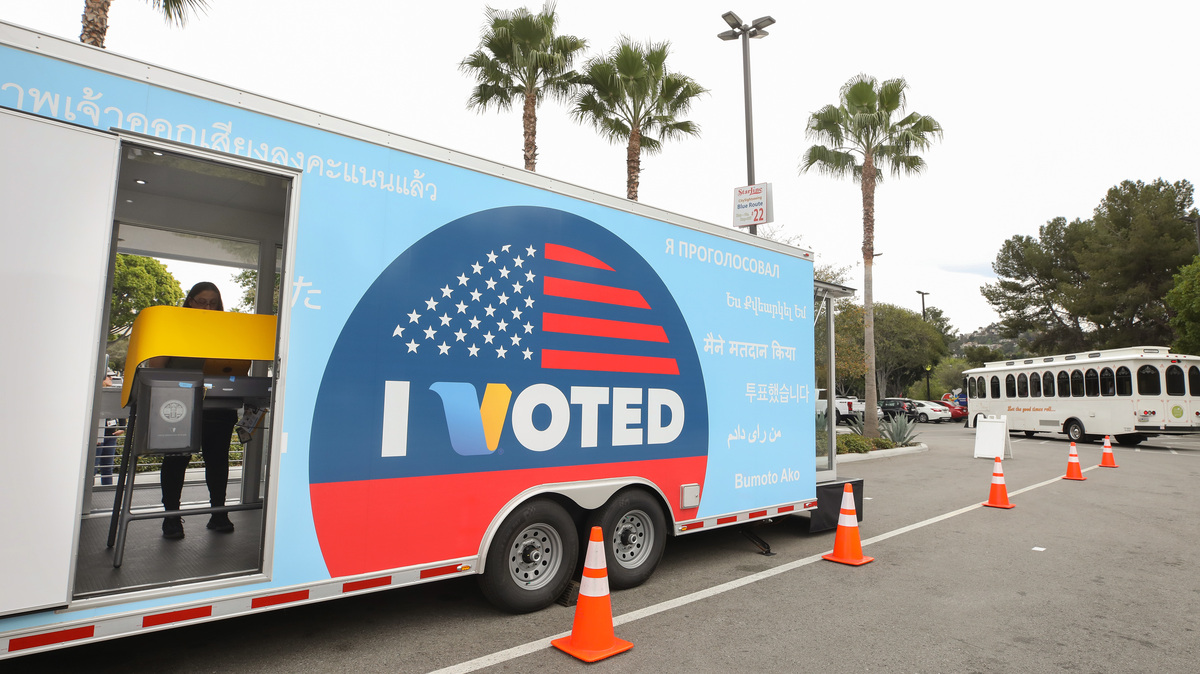 A voter prepares her ballot during early voting for the California presidential primary election at a new LA County "Mobile Vote Center" outside Universal Studios Hollywood on Thursday. Large numbers of Californians vote early and by mail, which can slow election night vote counting.

The caucus debacle that went down in Iowa at the beginning of February wasn't supposed to happen. But as states across the nation prepare for Super Tuesday, experts say American voters should get used to waiting for election results.

In many states, a delay of days or even weeks won't be the result of a botched election — but instead proof that the process is working.

"If we counted at the moment that the polls closed, we would disenfranchise people — simple as that," said Kathleen Hale, director of the Institute for Election Administration Research and Practice at Auburn University. "And if we expect to have a count within four or five hours after the polls close, we need a much more sophisticated and, quite frankly, expensive infrastructure to make that even remotely possible."

On Super Tuesday, 14 states including California, Colorado and Utah will all cast ballots. The western states increasingly rely on mail-in ballots that often take longer to count. More than 60% of California voters cast absentee ballots in 2018 and it took weeks to call some races in California and Arizona that year.

In multiple counties in another Super Tuesday state, Texas, voters will be casting ballots on brand-new equipment for the first time, which could also lead to slow results and late-night snafus.

But telling voters to expect slower results is difficult at a time when immediate gratification is increasingly the norm, Hale conceded. She wasn't impressed by the reactions on cable news the night of the Iowa caucuses, as it became clear that the results everyone had been expecting were not going to come anytime soon.

"I was concerned about the media dismay at the lack of instantaneous results. I watched all the major news channels, I'm an equal opportunity viewer and every channel was concerned that their folks were standing by, ready to dissect at the county level, the precinct level, all of the caucus data — and they didn't have it," she said.

It is important to note that caucuses, which are controlled by political parties, are vastly different than primary elections. Iowa, Nevada and Wyoming are the only states to use caucuses this year, and Nevada Democrats have endorsed moving to a primary. In the rest of the nation, voters will cast ballots in elections run by local election officials.

It's a difference that California Secretary of State Alex Padilla emphasized after the Iowa meltdown.

"Unlike caucuses, which are led by political parties and volunteers, elections in California are administered by elections professionals," Padilla said. "We have a lot of policies and procedures in place to both maximize the accessibility for all eligible citizens to be registered to vote and to cast their ballots. But also all the security measures in place to make sure that all ballots are counted, counted as cast and accounted for."

That's true in all states with primaries — but every state's elections laws are also slightly different. Hale says those varying laws mean that how, when and where people vote can diverge widely across the nation.

"In person on Election Day, probably half the country will vote differently this time," she said. "And the reason for that is that we've done a number of things to make voting easier and more convenient for people. Those conveniences have a sort of a backside cost."

That cost? It takes longer to count the vote.

In California, for example, vote-by-mail ballots don't have to reach county elections officials until three days after the election, as long as they're postmarked by Election Day.

In 2018, it took weeks for some races to be decided in California.

Additionally, California is one of 20 states where voters can now register the day of an election. But, they'll be casting a provisional ballot that won't be counted until it's reviewed by officials in the days and weeks after polls close.

California Democratic Party Chair Rusty Hicks leads a party that's pushed to expand voting rights — but he acknowledges that those changes have also made vote counting a weeks-long process.

"We in California believe a complete and accurate count is always better than a fast count," he said. "And so I think everyone has to walk into Election Day understanding that there will be a significant portion of the vote that is not available, that is not accessible, That cannot be counted on election night."

Another wrinkle standing in the way of a quick primary election night outcome? Delegate math. Each state apportions delegates differently, but in most cases all the votes have to be tallied in order to sort out how many delegates each candidate has captured.

That also means the potential for anxiety and conspiracy theories among some candidates' supporters, since the top vote-getter in any given state may not also win the most delegates.

Her advice? Settle in, take some deep breaths, and prepare to wait. It could be days, or even weeks, between the time you cast a vote and when you know the definitive outcome.