Accessibility links
'For The Love Of The Glove' Is A Very Alternate History For Michael Jackson For the Love of a Glove explores an alternate history in which Michael Jackson meets a sparkly silver glove from outer space named Thrihil-Lha who gives Michael his talents in exchange for blood. 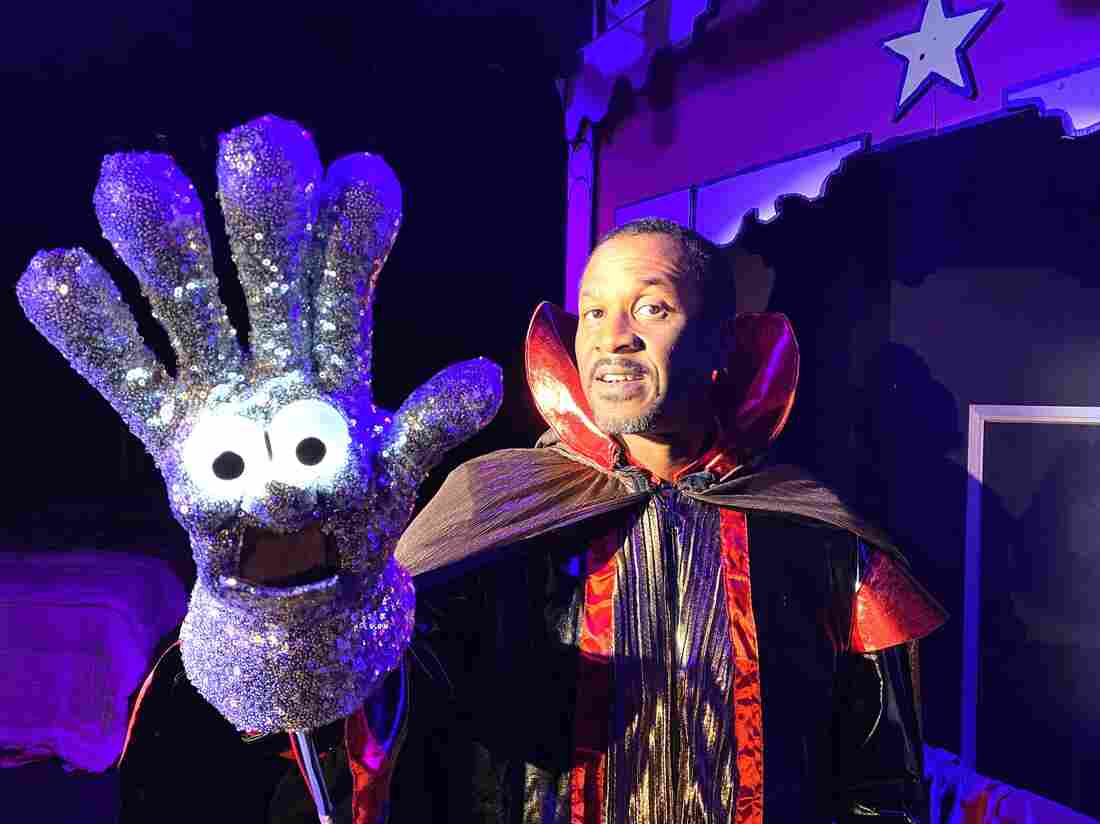 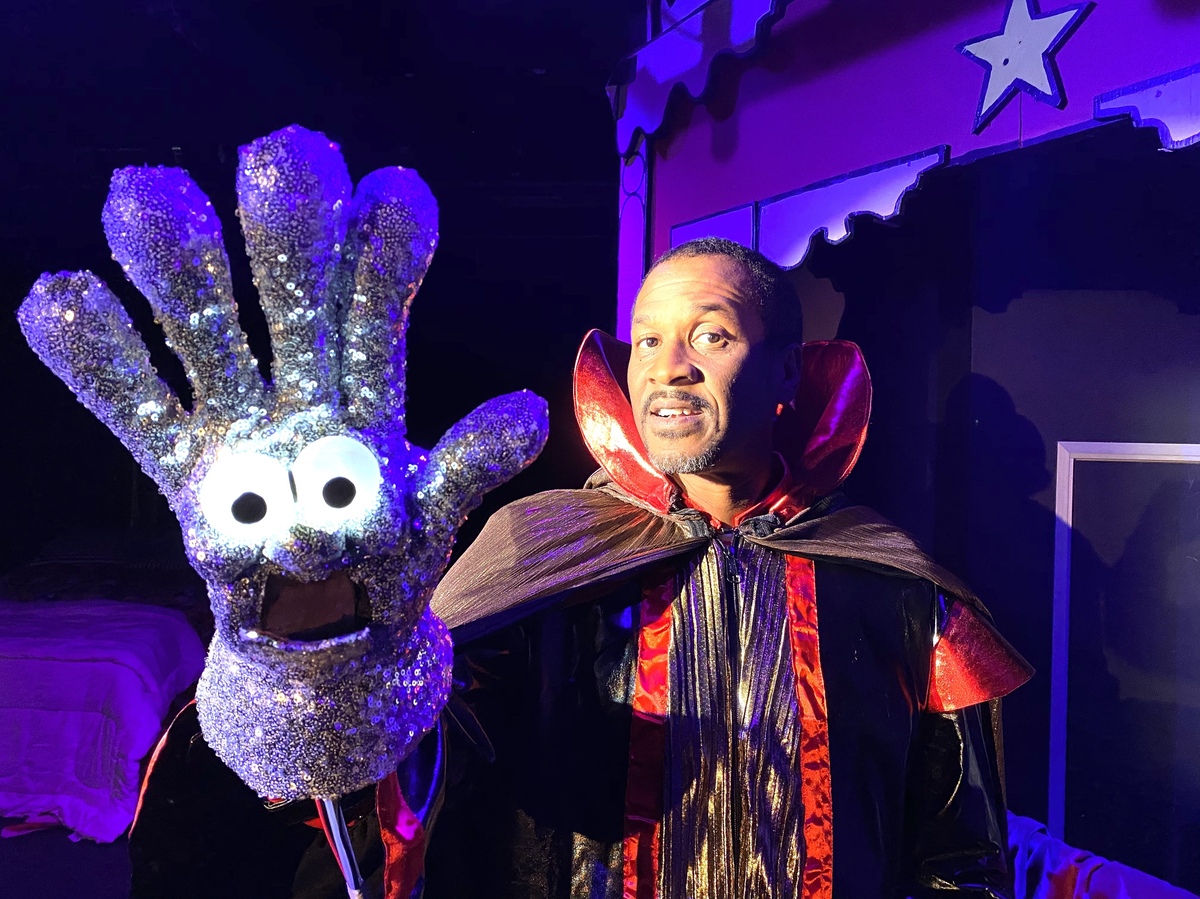 Jerry Minor plays Michael Jackson's glove in For the Love of a Glove. The unauthorized, satirical musical is playing at The Carl Sagan & Ann Druyan Theater until March 22.

It was supposed to be a run-of-the-mill TV biopic — at least that's what a cable TV network was looking for when they asked writer and director Julien Nitzberg for a movie about Michael Jackson. This was 15 years ago — before the King of Pop's death, but after his 2005 child molestation trial ended in an acquittal.

"I didn't know how you could make a sympathetic character with all the bizarre things he does," says Nitzberg. "Including sleepovers with kids. And I said to the network, 'How are we going to address it?' and they really didn't know how to."

He came up with a less straightforward way of telling the story: "All the most bizarre parts of Jackson's life are caused because an alien came to Earth, and trades giving him talent in exchange for feeding on his blood." 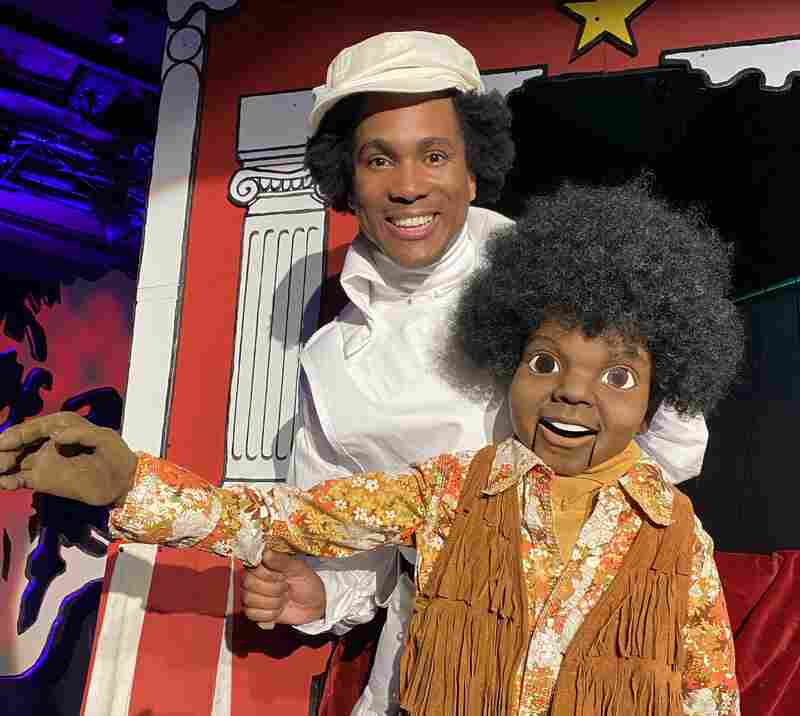 Eric B. Anthony plays Michael Jackson. For the Love of a Glove hide caption 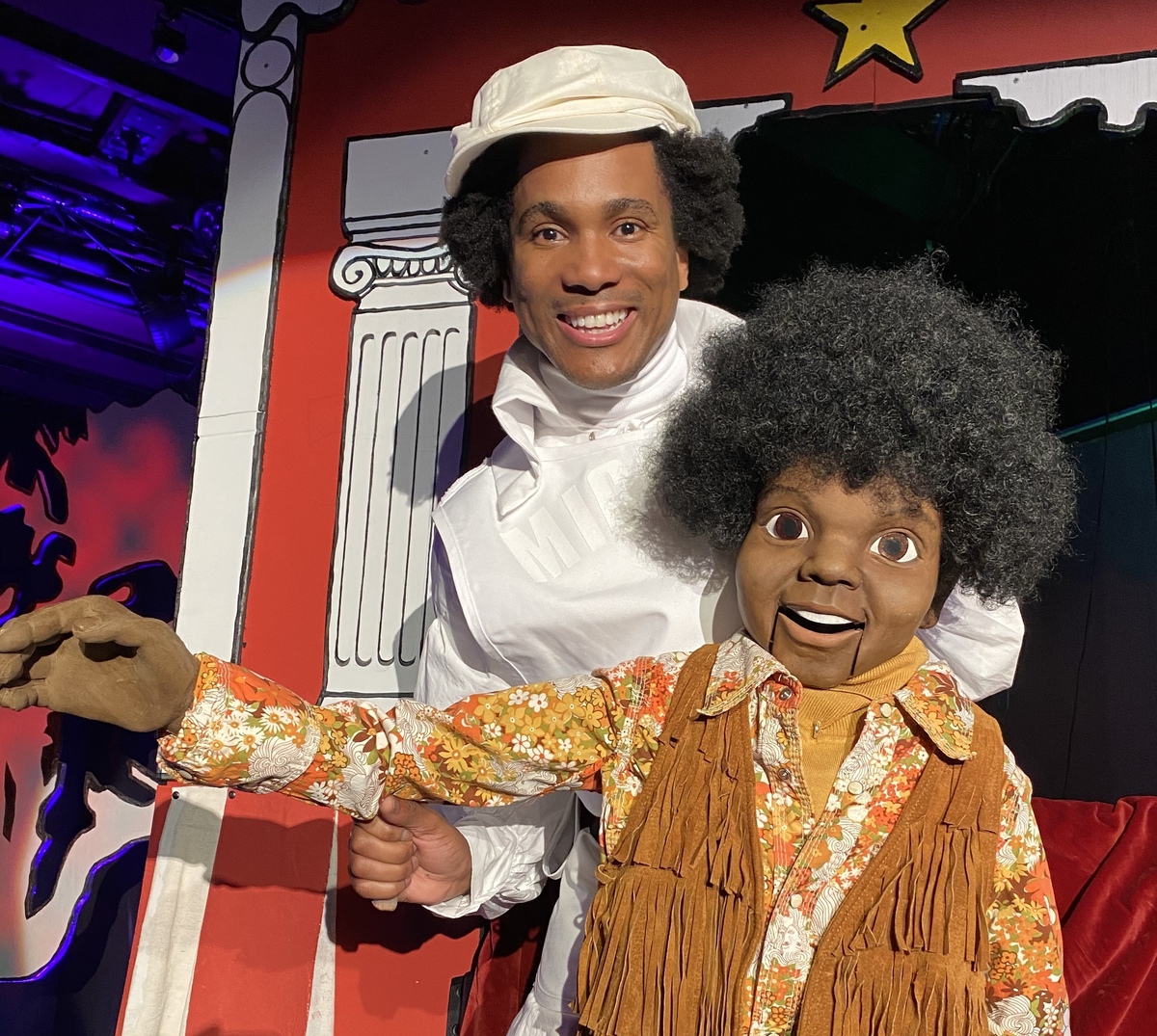 The network wasn't interested. But the idea has now come to life as an "unauthorized" musical called For the Love of a Glove. It imagines an alternate history where Michael Jackson (played by Eric B. Anthony) meets a sparkly silver glove from outer space named Thrihil-Lha (played by Jerry Minor). Who, yes, gives Michael his talents in exchange for blood — specifically virgin blood.

What follows next is a raunchy, surreal and absurd run through documented moments of Jackson's history. The first act focuses on young Michael, just getting started with the Jackson 5, and it digs into the abusive family dynamics. The white competition ripping them off. The powers controlling him.

Denise Thomas saw the play and wrote about it for the Compton Herald. She grew up a fan of Michael Jackson. "I'm living in that world at that time and I didn't even realize what was going on," she says.

The musical goes into the racism Jackson faced. White acts stealing their shtick. Motown records founder Berry Gordy molding Jackson, controlling everything the public knew about him, from his age to his political views. "Julien [Nitzberg] does a great job of bringing those things to the forefront. That is when Michael — to me — became a hero," says Thomas.

In these younger years, Michael, the other members of the Jackson 5, and the other children involved are played by puppets attached to the bodies of their adult actors. Nitzberg says the puppets were another way of communicating the absurdity of the whole situation. "Puppets have always served as this function for you to be able to make fun of power," he says. "To have a different perspective on things, to immediately release you from reality, and also allowed us to comment on the way the Jackson 5 were treated as artists." 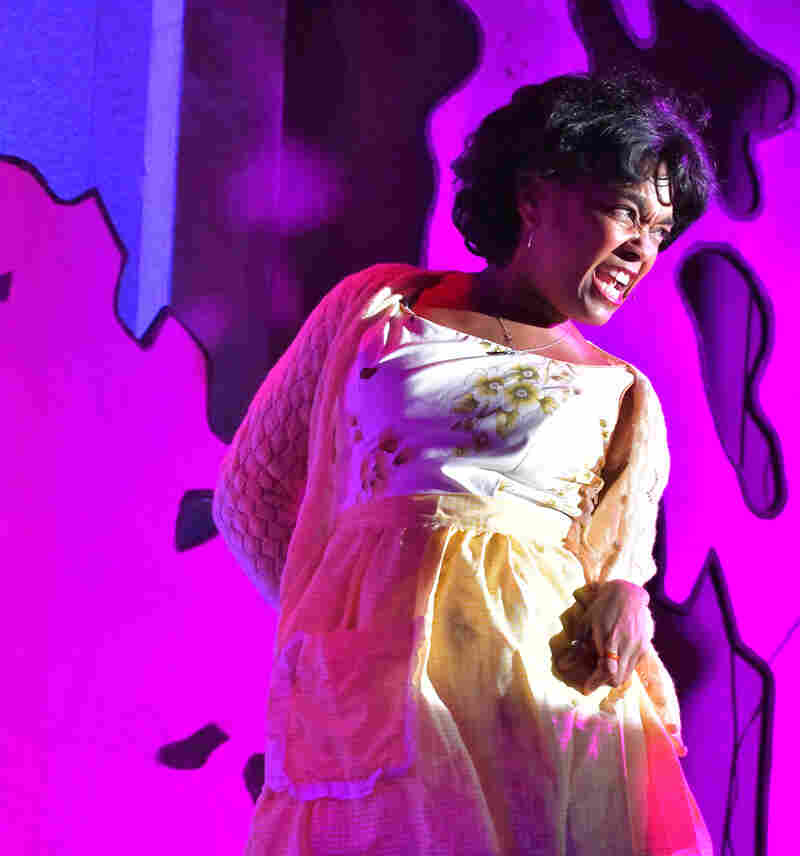 Family matriarch Katherine Jackson is played by Suzanne Nichols. For the Love of a Glove hide caption 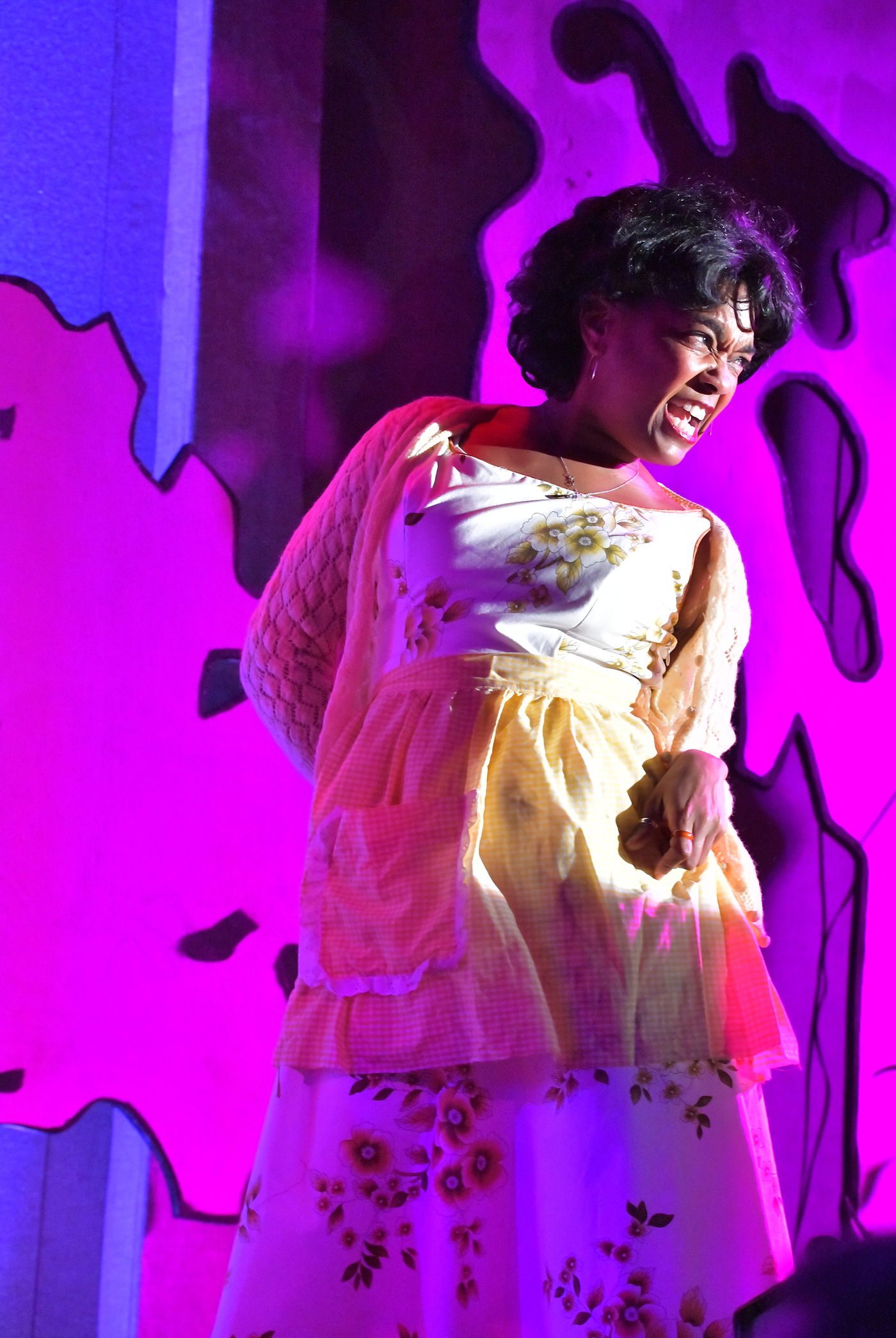 "When I first read the script, it was a bear to wrap your arms around and just mentally get with it," says Jones. "Because when you read some of the lyrics that could be a little off-putting — not to mention potty mouthed — and if you read some of the sexual innuendos that are in there, it has to be said if you're going to get to the essence of who Michael was."

The Michael of For the Love of a Glove is lonely and isolated. Actor Eric B. Anthony says he got some heat for even taking the role in the first place.

"Like, 'How dare you drag his legacy and memory through the mud,'" he says. "'You're a black man and you're disrespecting a black icon.' And I'm like, first of all, you haven't read the script and we haven't even done the show so how do you know what I'm doing with the show. Secondly, I'm really excited because none of that is happening in the show."

While For the Love of a Glove isn't a hagiographic jukebox musical, it also isn't interested in tearing Micheal Jackson down completely. "He's the King of Pop," says Nitzberg. "And theater usually deals with flawed kings, flawed gods, etc."

As the play moves into its second act, it deals with Michael as an adult — just after the recording of the hit album Thriller. It's here where writer Denise Thomas says For the Love of a Glove fell short and could've done more to interrogate Jackson's legacy. Maybe by way of asking us to think more about the real Michael Jackson's alleged victims. At the end, she was still left questioning. "How should we really feel about Michael, now that we know how the story ends?" she asks.

But For the Love of a Glove isn't a play about answers. It's about questioning legacies — and the legacies of kings are never really settled.