Accessibility links
Trump Silent On Stock Market After Coronavirus Plunge President Trump used to boast about stock market gains at every turn. But after coronavirus fears caused the worst plunge since 2008, he has gone silent on this pillar of his reelection pitch. 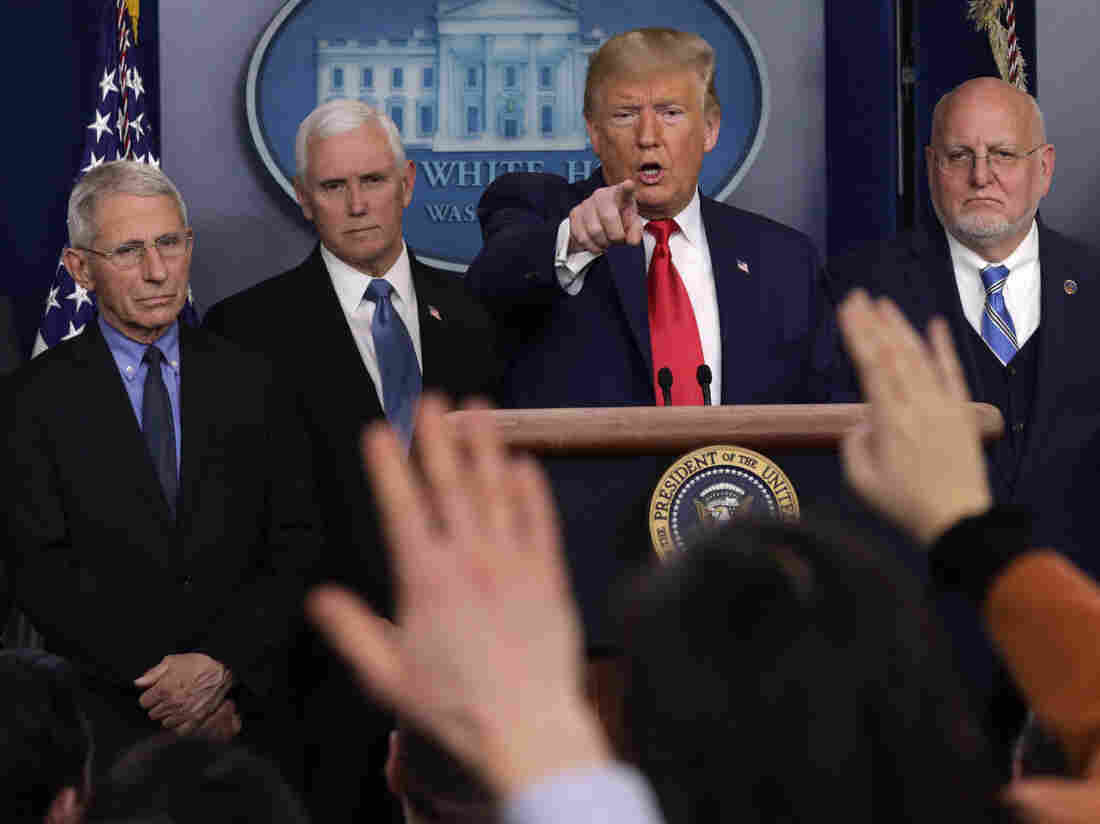 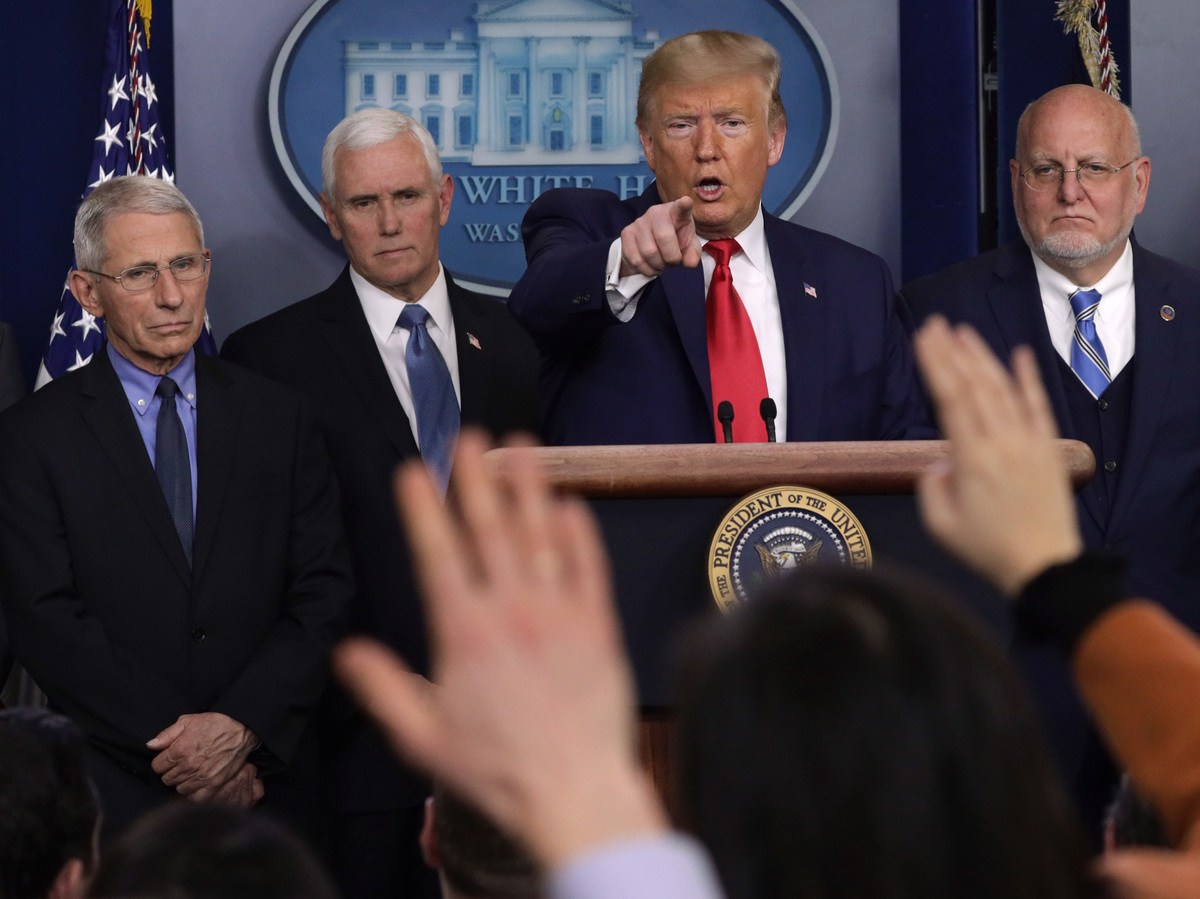 Last week, even as he responded to growing fears about coronavirus, President Trump had his eye on the markets. At the start of what turned out to be a terrible week for stock prices, Trump tweeted that coronavirus was "very much under control" and implied that stock market losses were overdone.

The Coronavirus is very much under control in the USA. We are in contact with everyone and all relevant countries. CDC & World Health have been working hard and very smart. Stock Market starting to look very good to me!

But by the end of the week, Trump was decidedly less sanguine. It turned out to be the worst week for U.S. stocks since the 2008 financial crisis.

"Well, I think it's just people don't know. It's the unknown," Trump said of the market reaction to coronavirus. "You know they look at it and they say, 'How long would this last?' "

More than any other president in recent memory, Trump has tied his fate to the stock market. He has tweeted about it more than 140 times since taking office and has made stock price gains a key part of his reelection pitch, often inflating the gains as he did in a video just released by the White House on Feb. 22.

"The stock market is up 80%, in some cases much higher than that," Trump said. "401(k)s are at record levels." But if you look at the Dow Jones Industrial Average, it was up by 56% on Feb. 22, compared with the date of Trump's election. Some of those gains were erased in the past week. 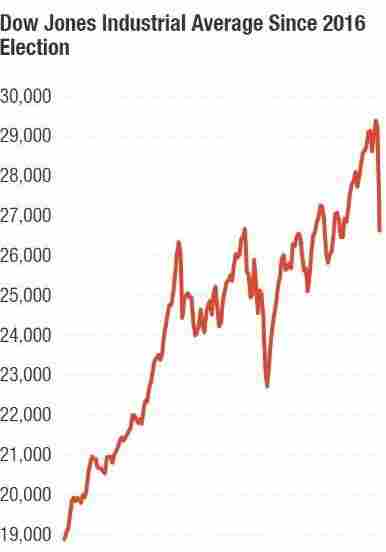 Markets have climbed since the 2016 election but have seen a sharp drop in the past week because of fears coronavirus will hurt the global economy. DJIA data from Federal Reserve Bank of St. Louis hide caption

On Friday night, at a rally in South Carolina, Trump didn't mention the stock market, which is quite a change from his norm. In recent months, he has boasted about market records at rallies.

He brought it up in his State of the Union address, and even at the National Prayer Breakfast, telling attendees, "For those of you that are interested in stocks, it looks like the stock market will be way up again today." His prediction proved accurate that day.

Trump even has a riff he does at rallies about a man he calls Henry whose wife has been wowed by the performance of his 401(k). Trump quotes him as saying that his wife thinks he's a genius and loves him again. "Shows what money can do, right?" Trump joked at the Phoenix rally.

It's easy to get caught up in the exuberance of a rising market, said Matt McDonald, a partner at Hamilton Place Strategies, a political and economic consulting firm.

"If the parade is going, there's a high temptation to just get in front of the parade," McDonald said. "The problem is, live by the markets, die by the markets — and we just went into correction territory the other day." Traders at the New York Stock Exchange react at the end of the worst week on Wall Street since 2008. Scott Heins/Getty Images hide caption Traders at the New York Stock Exchange react at the end of the worst week on Wall Street since 2008.

A correction is market losses of more than 10% over a short period of time. And that's exactly what happened last week.

The Dow set another record last Thursday: the largest point drop ever in a single day. Trump isn't boasting about that one.

White House officials are running through options for what to do if coronavirus infects the broader economy as well, including tax cuts. For now, economic adviser Larry Kudlow is urging calm.

"I just think everybody — whether you are an investor or whether you're an ordinary Main Street person — people should not overreact," Kudlow told reporters. 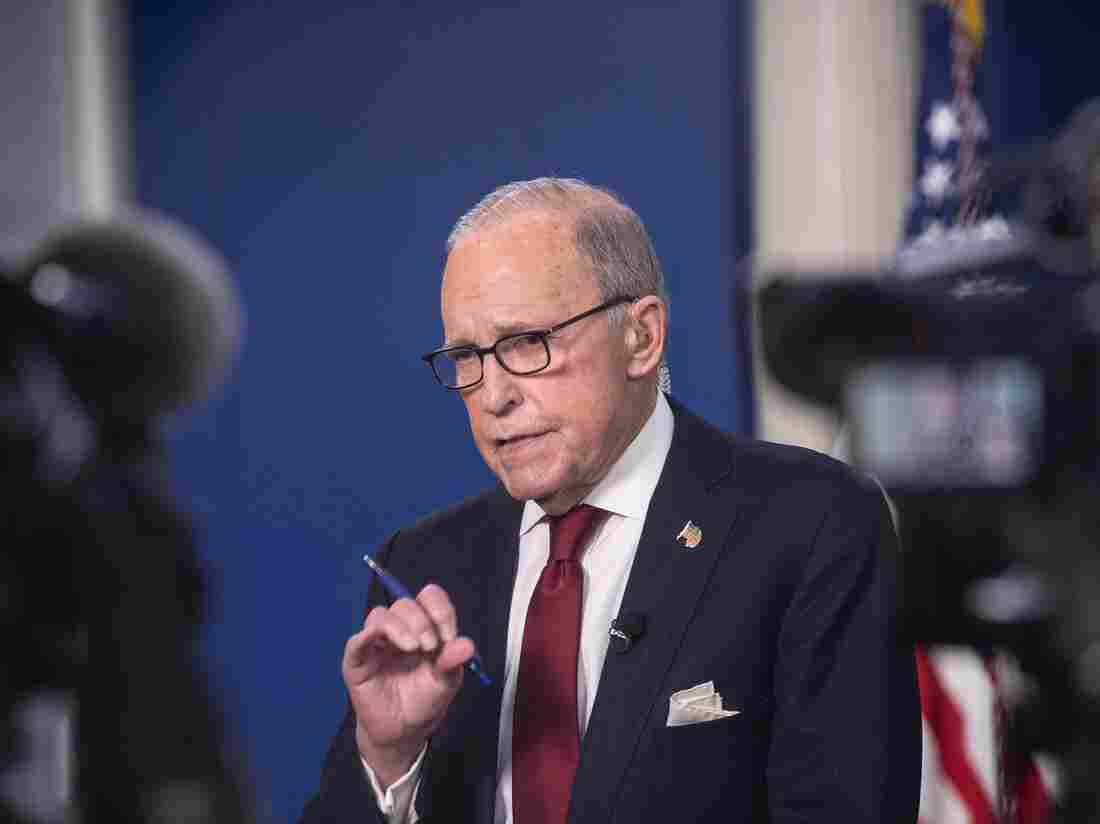 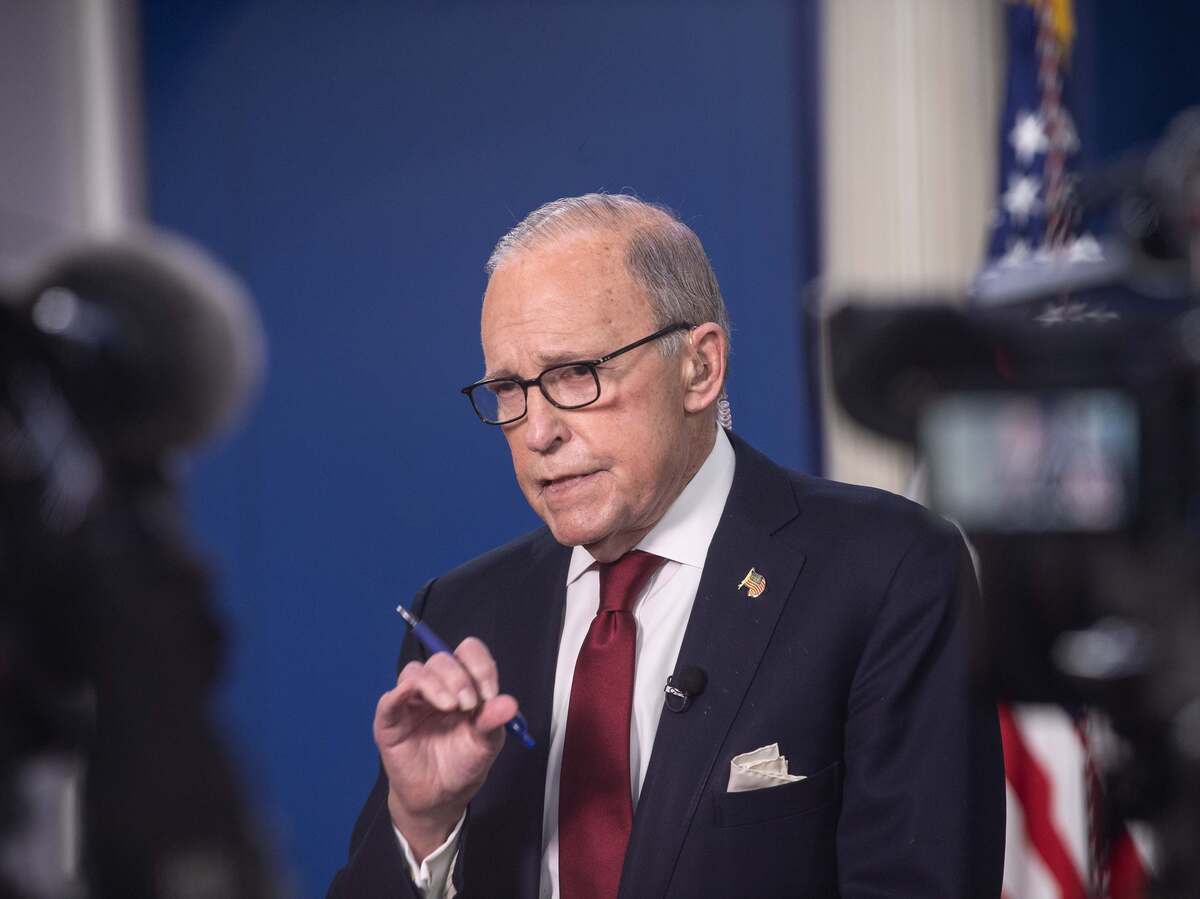 Market movements aren't a particularly meaningful economic indicator. But McDonald said they are something consumers see on a regular basis, along with gas prices.

"For presidents, they want to be careful about taking responsibility for things that they can't entirely control," said McDonald.

While the president can't control stock prices, he does have the responsibility for how he and his administration respond to coronavirus — something he acknowledged on Saturday after announcing the first U.S. death from the virus.

How coronavirus plays out in the coming weeks and months and the Trump administration's response to it could have a lot more bearing on the president's reelection chances than what is happening on Wall Street.

"Safety, health — No. 1," Trump said, after explaining that further restricting travel could hurt companies like airlines. "The markets will take care of themselves."