Accessibility links
Joe Biden's Big S.C. Win And What It Means For Super Tuesday The former vice president won by nearly 30 points in South Carolina, giving him a big claim to being the principal alternative to Bernie Sanders for the Democratic presidential nomination. 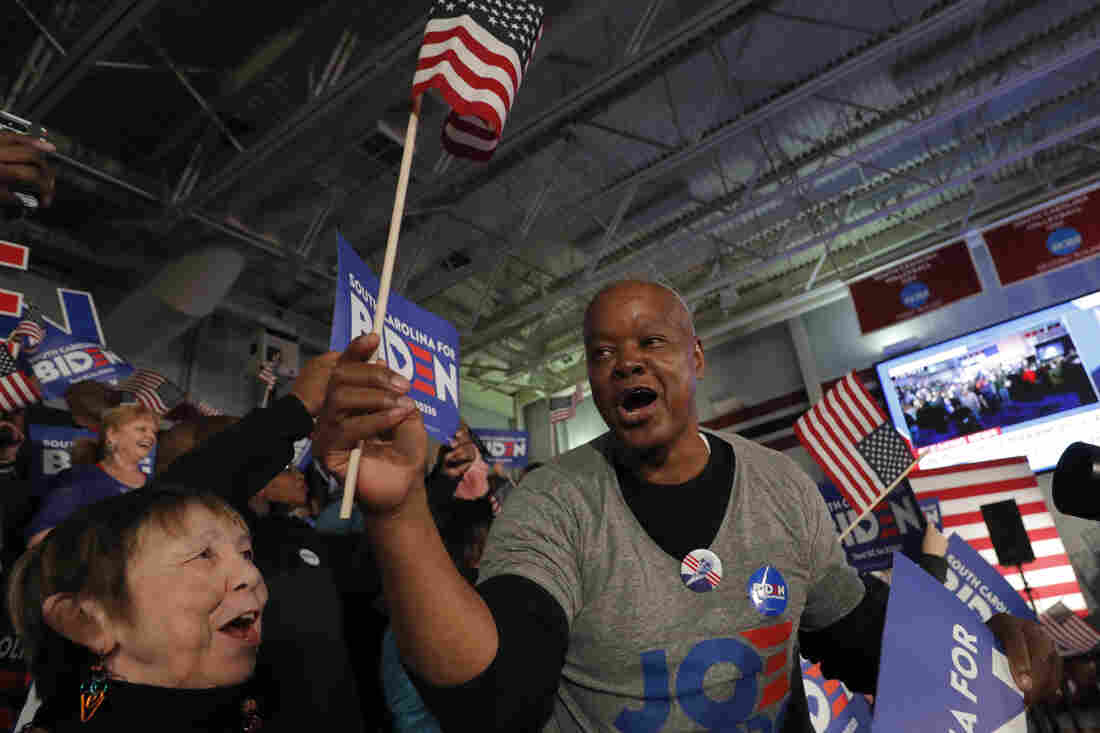 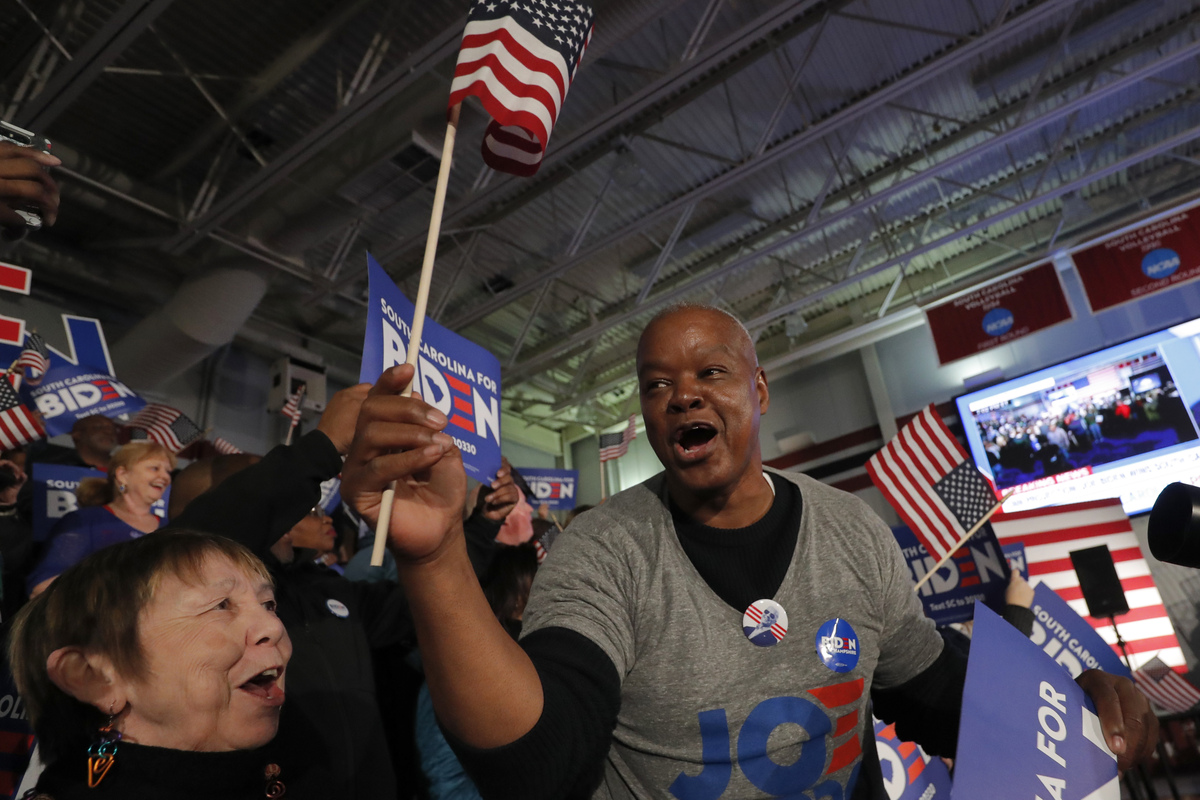 If he had lost, Biden's campaign would likely have been dead. But he far exceeded expectations, with a nearly 30-point win in the state's Democratic presidential primary.

"And we are very much alive," Biden said during his victory speech Saturday night.

Biden lives to fight another day — some would say a super day — and he helped make the case for himself as the principal alternative to Vermont Sen. Bernie Sanders. But he's still the underdog heading into Super Tuesday because of his structural disadvantages.

Can he gain enough momentum from his big win to help propel him? Attempted answers to that and more, with these four takeaways:

1. It may now be a two-person race

The Biden who showed up Saturday night during his victory speech in South Carolina is the Biden whom a lot of establishment and moderate Democrats were hoping to see.

If he earlier made a lot of them indecisive about whether he should be the Sanders alternative — after poor finishes in Iowa and New Hampshire and his lack of a focused message — he probably reassured a lot of them Saturday to get behind him.

And she's not the only one.

"I think this is a two-person race right now," former Obama 2008 campaign manager David Plouffe said on MSNBC. "There's only two people I think are going to accept our party's nomination. It's either Bernie Sanders or Joe Biden."

Wealthy venture capitalist Tom Steyer dropped out Saturday night, which might help Biden's margins with black voters in the half a dozen states on Tuesday that have significant black Democratic populations.

But it doesn't look like any of the other candidates crowding the moderate lane are getting out before then. Biden has to hope that moderate voters who don't want Sanders to be the nominee — and are thinking about casting their votes for former New York City Mayor Mike Bloomberg, former South Bend, Ind., Mayor Pete Buttigieg or Minnesota Sen. Amy Klobuchar — reconsider and go with him. 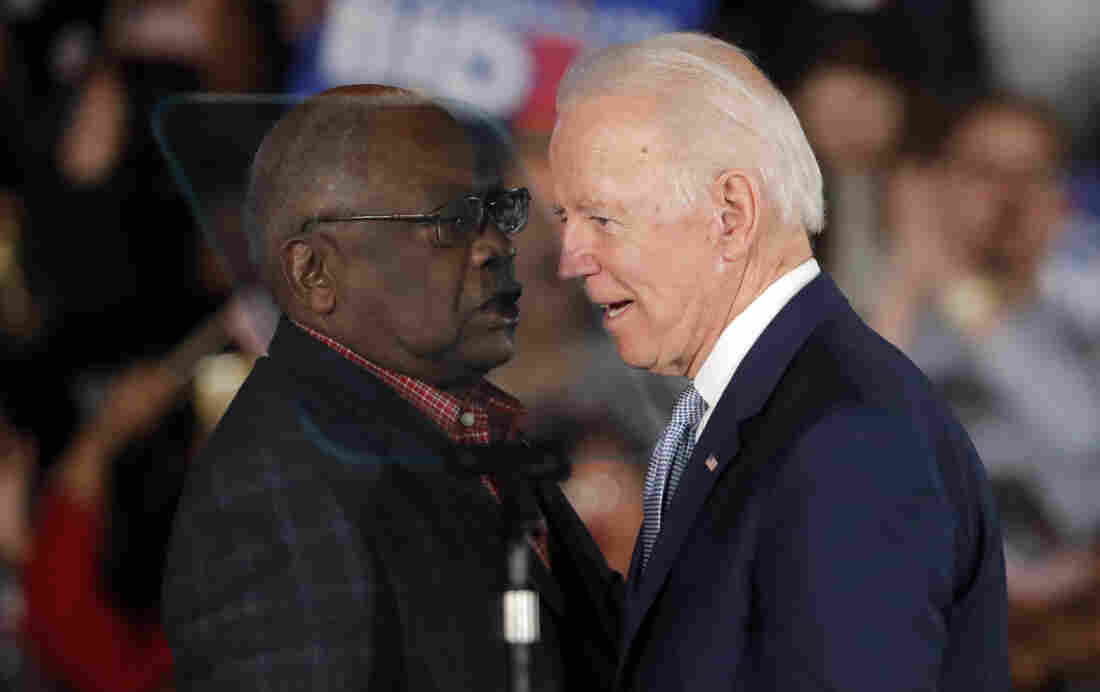 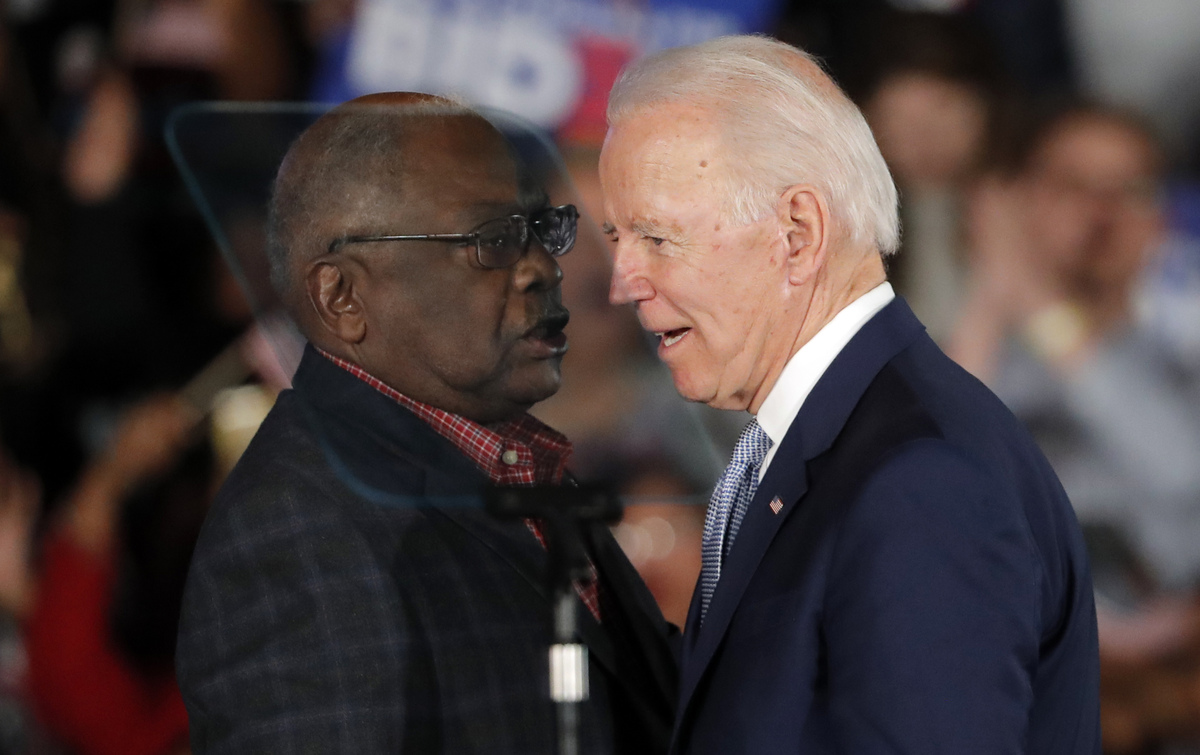 Biden got the endorsement last week of South Carolina Rep. Jim Clyburn, a Democratic leader in the House and the highest-ranking African American in Congress. He's venerated among Democrats in South Carolina.

"My buddy Jim Clyburn," Biden said during his victory speech, "you brought me back!"

Half of South Carolina Democratic voters said Clyburn's endorsement was an important factor in their vote — and Biden won them overwhelmingly, according to the exit polls conducted by Edison Research and sponsored by some of the major TV networks.

Clyburn endorsed Biden on Wednesday, and 37% of voters said they made up their minds in just the last few days. Biden won them by a huge margin.

Do any other bold-faced names in key states come out for Biden ahead of Super Tuesday, when he needs them most?

3. Biden has to hope he doesn't wind up too far behind on Super Tuesday

Biden comes out of Saturday with the most votes out of the first four contests and is very close to Sanders in the overall delegate count. So then, why would Biden be the underdog on Super Tuesday?

A few reasons: he's being badly outspent on the airwaves in the 14 Super Tuesday states; he has fewer staffers organizing on the ground; and Sanders' strength with Latinos.

Sanders is spending 25 times what Biden is in Super Tuesday states — $15.5 million to $600,000, according to Advertising Analytics. To put that in context, Biden spent more on ads in South Carolina ($1 million) than across the 14 Super Tuesday states.

The most critical thing about Biden's paltry Super Tuesday spending: He's not competing on the airwaves in California. California is the crown jewel of Super Tuesday, with 415 delegates, or 30% of all the delegates at stake Tuesday.

Biden needs money — a lot of it — to have any hope of catching up to Sanders. Politico reported Saturday that Biden is gaining at least one major donor and that a pro-Biden super PAC raised $2.5 million Thursday.

But it might be too late to make a real difference for Super Tuesday. Here's this forehead-slapping nugget from the Politico piece:

It was too late, by Friday, to create a TV ad and get it on the air, according to the PAC — and it remains unclear whether the help is coming too late for Biden's campaign, which largely abandoned delegate-rich California, for example, in the run-up to Super Tuesday.

Latinos are a crucial voting bloc in California and Texas. If Sanders runs up the score with them Tuesday, he's going to be tough to catch in the pledged-delegate race.

4. Sanders figures to do well on Super Tuesday, but he needs to do better with black voters to quiet the naysayers 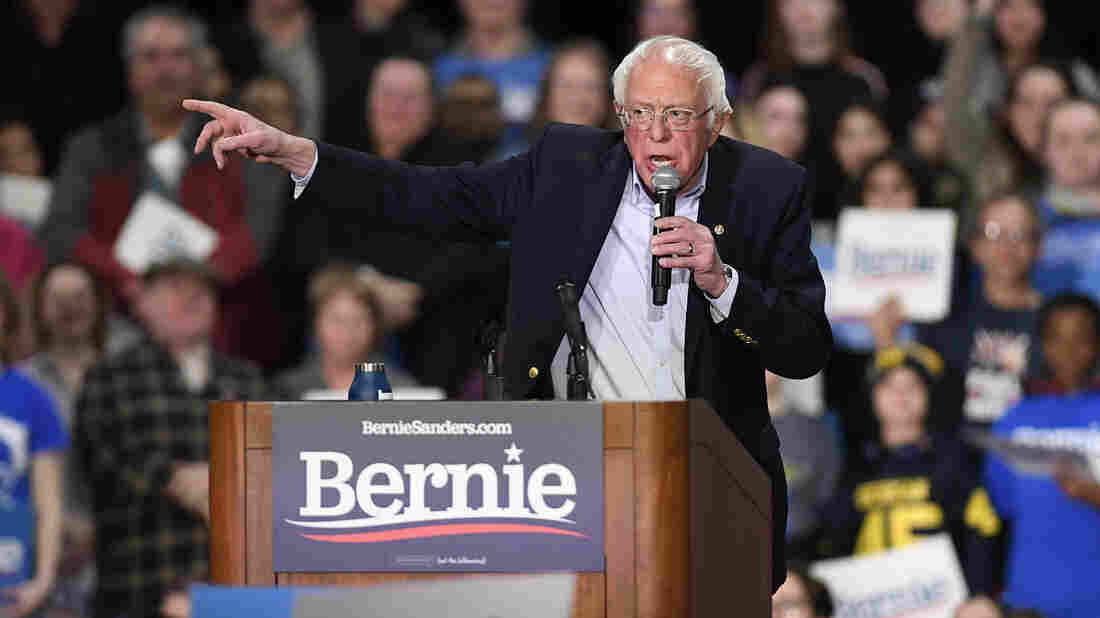 Bernie Sanders speaks during a campaign event in Massachusetts on Friday. Massachusetts is one of the states that vote on Super Tuesday. On Saturday, Sanders was in another Super Tuesday state, Virginia. Jessica Hill/AP hide caption 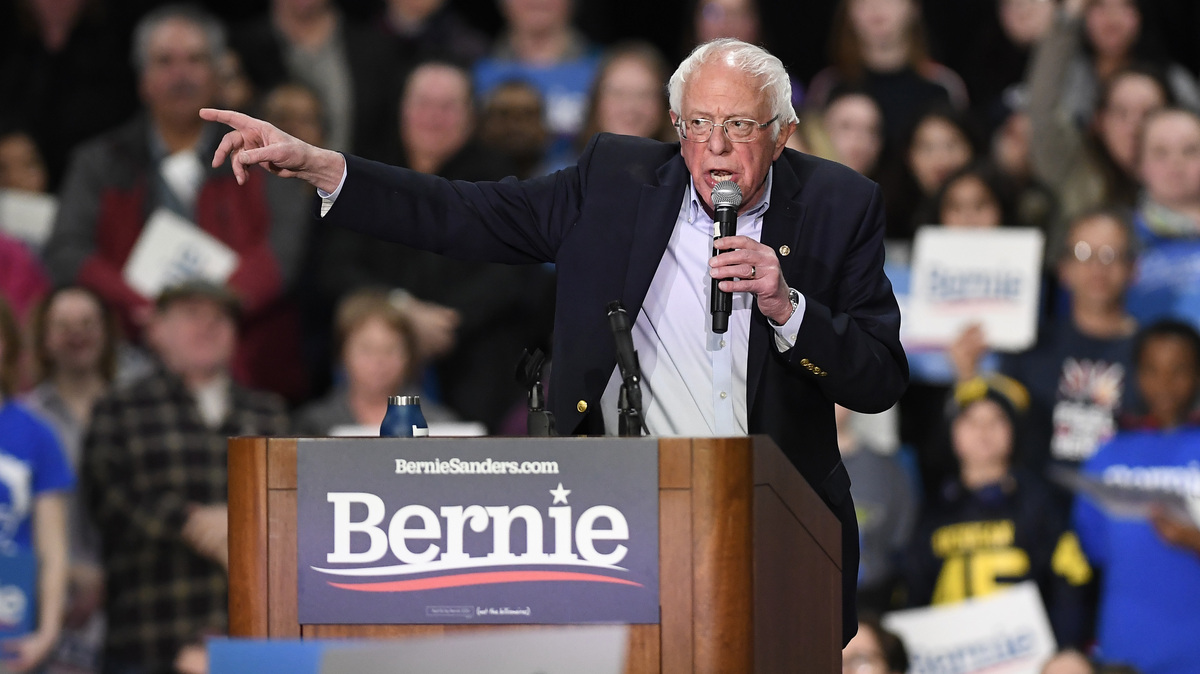 In Nevada, Sanders ate into Biden's margin with black voters, but that didn't happen in South Carolina. As expected, African Americans were a significant portion of the electorate Saturday night — 56%. Biden won them by 44 points over Sanders, 61% to 17%.

With that kind of loss with black voters, "how can he legitimately be our nominee?" former South Carolina Gov. Jim Hodges, a Biden supporter, said of Sanders on NPR Saturday.

Sanders has shown strength with younger black voters in polls, but Sanders didn't turn out young voters or new voters in South Carolina. Just 11% of the electorate was under 30, and just 19% were first-time voters.

Sanders is still in the driver's seat for the nomination, but if he doesn't do better with black voters on Super Tuesday, expect Hodges' line to grow into a chorus with party stalwarts.