Accessibility links
Coronavirus Outbreak: Airport Workers Fear They're Unprotected Appeals for calm by the Trump administration and the CDC haven't done much to ease the worries of airport workers, who say they're on the front lines of the COVID-19 outbreak. 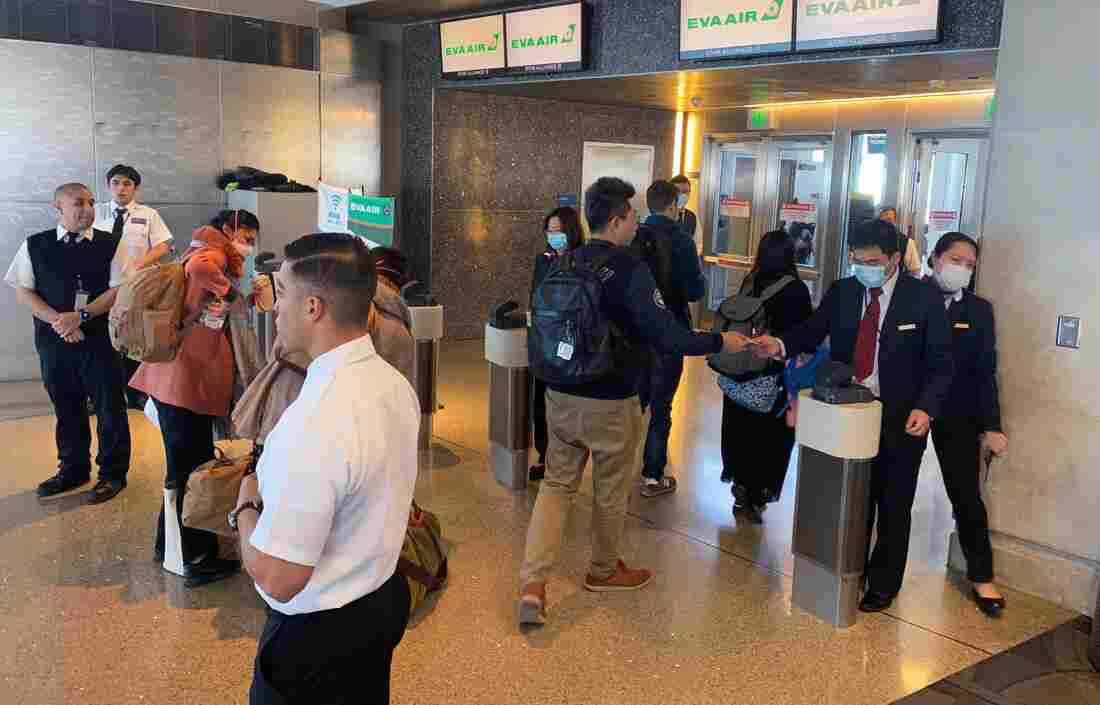 Humans — workers and flight crews as well as passengers — can be exposed to any number of pathogens at airports. EVA Air employees are seen wearing face masks at the Los Angeles airport in February amid the coronavirus outbreak. U.S. officials advise masks are not the best way to mitigate one's risk of contracting the virus. Daniel Slim/AFP via Getty Images hide caption 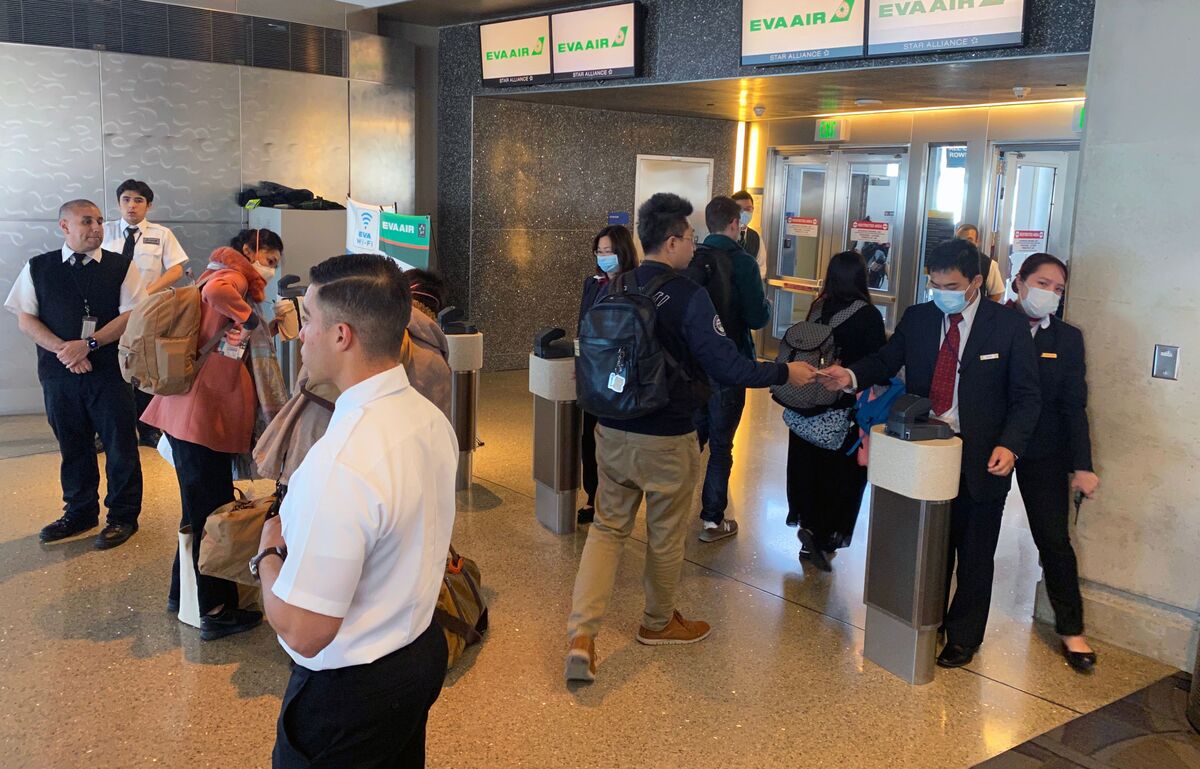 Humans — workers and flight crews as well as passengers — can be exposed to any number of pathogens at airports. EVA Air employees are seen wearing face masks at the Los Angeles airport in February amid the coronavirus outbreak. U.S. officials advise masks are not the best way to mitigate one's risk of contracting the virus.

After passengers filed off a flight from China five weeks ago, cabin cleaners at the Los Angeles International Airport were sent in to clean the plane. One of the workers, fearing she might contract the coronavirus, refused.

"I was scared to death," said Barbara Gomez of Inglewood, Calif. "I start crying."

Gomez said her boss told her that if she didn't board the plane, her job would be on the line. Still, she refused.

"Then the other manager came out of the office," Gomez recalled. "And he says, 'Do you know, that over 200 people are going to be boarding this aircraft in the morning.' I say, 'I don't care. Barbara Gomez is not going on the aircraft! You know, this is about my health.' "

In the end, Barbara Gomez did not get on the plane. She was eventually reassigned to clean a domestic flight.

No gloves, no masks

In this modern age of jet travel, it was a matter of time that the coronavirus would appear in the United States. As of Sunday, one person has died and dozens have been infected in the U.S., but the Centers for Disease Control and Prevention says the risk of contracting the virus remains low.

Appeals for calm by the Trump administration and the CDC haven't done much to ease the worries of airport workers, who say they're on the front lines.

Security personnel, gate agents and other employees come in contact with hundreds of travelers a day. Cleaning crews have to mop up bodily fluids such as vomit, mucus and blood. Many of these workers say they lack gloves and respiratory masks as well as the information they need to protect themselves.

She said she and her colleagues are not provided with gloves; they are lucky if flight crews can spare a few extra.

Marc Desnoyers, the president of JetStream Ground Services, which employs Gomez, insists that this is not the case.

"Provisions of cleaning solutions, gloves and all necessary safety equipment, including masks when requested, are closely monitored and replenished when needed," said Desnoyers in a written statement and in a phone interview with NPR. "When a concern is raised by a team member, we work to address it immediately, as we did with this employee."

When asked about the city-mandated, 16-hour training curriculum in emergency preparedness, which includes information on infectious diseases, Desnoyers said "every employee has been trained."

He added that Gomez completed her training in November.

But according to Gomez, the only training she has received from JetStream was a 30-minute class in CPR.

They are particularly vulnerable, he said, because they don't work directly for the airlines. Instead, they are employed by subcontractors that frequently cut corners.

NPR obtained copies of half a dozen complaints that JetStream employees recently filed with the city. All stated that their training was brief, limited to CPR and active shooter drills.

MAP: Which Countries Have CDC Travel Advisories Because Of Coronavirus

Health Officials Warn Americans To Plan For The Spread Of Coronavirus In U.S. Feb. 25, 2020

On the front lines

To prevent the spread of the virus, several major U.S. carriers have stopped flying to mainland China. But now that the coronavirus is infecting people in the U.S., that's not much comfort to airport workers.

Yvette Stephens, a security guard for international flights at Newark Liberty International Airport, comes in contact with hundreds of passengers from all over the world.

And it's a messy business.

"We have people every single day that cough, sneeze, don't cover their mouths or their nose," Stephens said.

Workers complained, and the airlines received some unflattering media attention. It appears the airport is now stepping up protections for its ground staff.

Stephens' employer, OmniServ, has offered gloves and will soon be providing face masks, she said, "but we won't know more until they start the training process."

She wasn't willing to wait for company-provided masks.

Stephens has multiple sclerosis, so she bought a supply and handed them out to her co-workers.

As of Sunday, the CDC is not recommending that healthy people wear masks. Measures, such as frequent hand-washing and staying away from people who are sick, are more effective.

But these guidelines are not reassuring contract airport workers who are paid hourly.

Stephens said she has no choice but to work.

Stephens lacks health insurance. For now, she continues to work at the airport and hopes she doesn't get sick.

But she has no doubt where the virus is headed.

"You can't say it's not going to come this way, because it will."