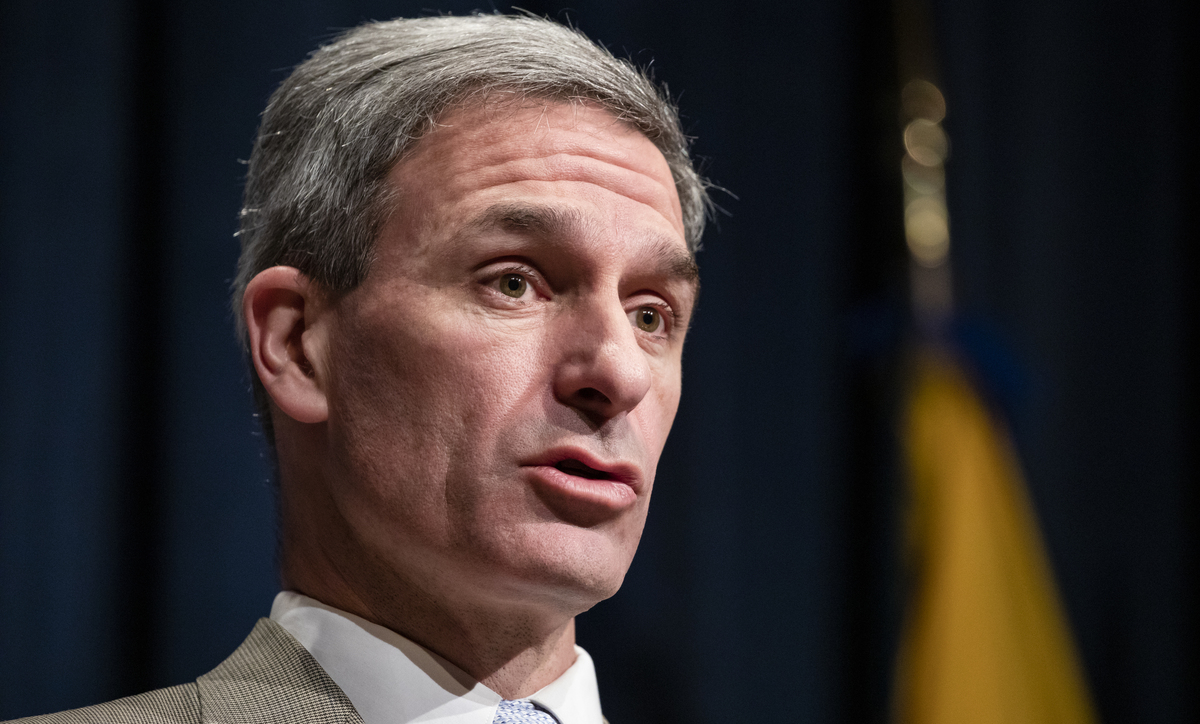 Ken Cuccinelli speaks on Feb. 7 in Washington. A federal judge said his appointment to lead U.S. Citizenship and Immigration Services was unlawful.

A federal judge ruled on Sunday that Ken Cuccinelli's appointment to a top immigration position in the Trump administration was unlawful, saying several directives issued by Cuccinelli to tighten asylum rules must now be "set aside."

In a 55-page ruling, U.S. District Judge Randolph Moss said the administration violated the Federal Vacancies Reform Act when it tapped Cuccinelli in June 2019 to lead U.S. Citizenship and Immigration Services, the agency within the Department of Homeland Security that oversees legal immigration into the country.

The ruling invalidated a pair of directives issued by Cuccinelli, an immigration hard-liner and the former attorney general of Virginia, that introduced new restrictions on the asylum process.

The first directive shortened the length of time asylum-seekers have to prepare for "credible fear interviews" with officials from 48 or 72 hours to "one full calendar day from the date of arrival at a detention facility." With the second, Cuccinelli prohibited asylum officers from granting extensions to this new policy "except in the most extraordinary of circumstances."

"On the merits, the Court concludes that Cuccinelli was not lawfully appointed to serve as acting Director and that, as a result, he lacked authority to issue the reduced-time-to-consult and prohibition-on-extensions directives," Moss wrote in his ruling.

Under the 1998 vacancies law, when a Senate-confirmed leader of a federal office resigns, it falls to the "first assistant" of that vacant office to assume responsibility on an acting basis.

But Cuccinelli didn't work at USCIS prior to leading it. Instead, the acting head of DHS at the time, Kevin McAleenan, "appointed Cuccinelli 'to serve as the Principal Deputy Director of [USCIS],' a position that did not exist prior to Cuccinelli's appointment," the judge noted.

Then McAleenan changed the order of succession to make the principal deputy director the "first assistant," allowing Cuccinelli to "leapfrog" the existing deputy director to become the agency's acting director.

"Here, the acting Secretary created a position that is second in command in name only," the judge wrote.

The Trump administration is expected to appeal the decision. In an email, a spokesperson for the Department of Homeland Security said, "We obviously disagree with the court's decision and will be looking closely at the decision."

Sunday's ruling stemmed from a case brought by immigrant advocacy groups on behalf of five asylum-seekers from Honduras. The asylum-seekers say Cuccinelli's directives did not give them adequate time to speak with lawyers and family members about their cases before they met with asylum officials.

Immigration officers found that the asylum-seekers — two women and three children — did not have a credible fear of persecution. Both women separately said they had been raped and faced other violence back in Honduras. All five were then subject to orders for expedited removal.

But Moss said because Cuccinelli did not have the authority to issue the directives, the women's "credible-fear determinations" would be vacated and they would not face expedited removal "until a legally sufficient interview occurs."

"To be sure, the Court has concluded that the two directives are invalid and must be set aside," Moss wrote.

It remains unclear what the ruling might mean for Cuccinelli, who still leads USCIS and in November became the second-highest official at the Department of Homeland Security.

A vocal supporter of President Trump, Cuccinelli has drawn attention for his controversial rhetoric around immigration. In an August interview with NPR, he twisted Emma Lazarus' famous words on a bronze plaque at the Statue of Liberty, changing the quote to say, "Give me your tired and your poor who can stand on their own two feet and who will not become a public charge."

Democracy Forward, one of the groups involved in the lawsuit, called the decision "both a victory for the rule of law and a significant blow to the Trump administration's xenophobic agenda."

"We are proud to share this legal victory with the brave asylum seekers who brought the Trump administration to court to ensure that the United States stays true to its tradition of providing a haven for those fleeing persecution and seeking asylum in America," said Anne Harkavy, the group's executive director.